The water level in the Yamuna in Delhi has receded below the warning mark but the situation is being monitored as the IMD has predicted widespread rainfall in the upper catchment areas of the river, officials said on...

Heavy rains had pounded the city in the first half of July, although the latter part of the month mostly remained dry, due to which the temperature and humidity had gone up.

The India Meteorological Department (IMD) issued a yellow alert, warning of moderate rain or thundershowers in some areas of the city. Red Alert In 3 Districts As Heavy Rains Continue In Kerala

Red alert was declared in the districts of Kottayam, Idukki and Ernakulam for the day and Orange alert in the remaining districts barring Thiruvananthapuram, Kollam and Kasargod, according to an IMD district rainfall...

The minimum temperature in the city dipped slightly to settle at 25.2 degrees Celsius, two notches below average, the India Meteorological Department (IMD) said. 76 Dead In Rain-Related Incidents In Maharashtra So Far This Monsoon: Report

In Gadchiroli district in east Maharashtra, communication with 128 villages was lost due to heavy rains. 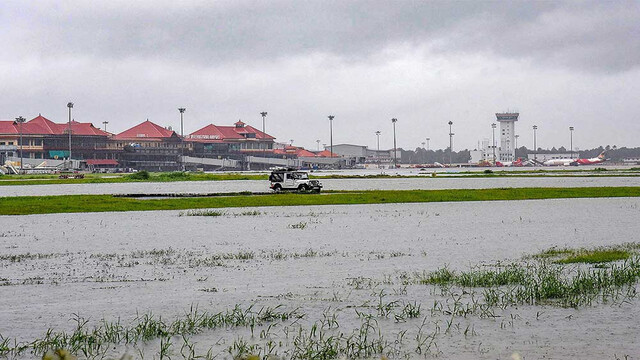 'Flood Tourism' Will Not Be Permitted: Kerala Minister

K Rajan said there is a growing trend among people to visit areas which are flooded and try to enter the waters there or catch fish and the same should be avoided as it creates an additional burden on the authorities... Heavy Rains In Kerala With Orange Alert In 4 Districts, Yellow Alert In 8 Others

The IMD at 4 pm issued orange alert for the day in the northern Kerala districts of Kozhikode, Wayanad, Kannur and Kasaragod.

Hot And Humid Day In Delhi, Orange Alert For Moderate To Heavy Rain On Wednesday

Hot and humid weather conditions prevailed in the national capital with the maximum temperature settling at 36.8 degrees Celsius. The India Meteorological...