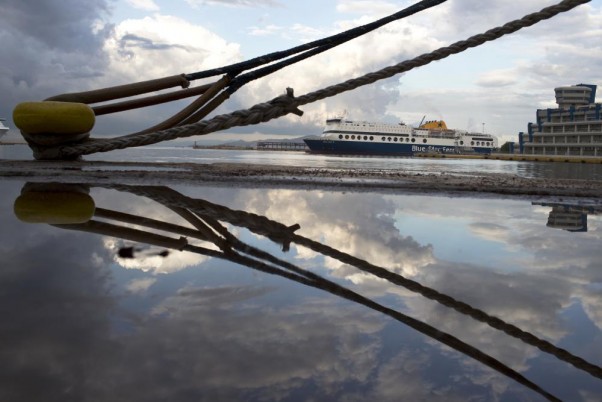 Ferries are docked at the port of Piraeus, near Athens, during the first day of a 48-hour strike by the Panhellenic Seamen's Union (PNO) to protest new austerity measures that government plans. 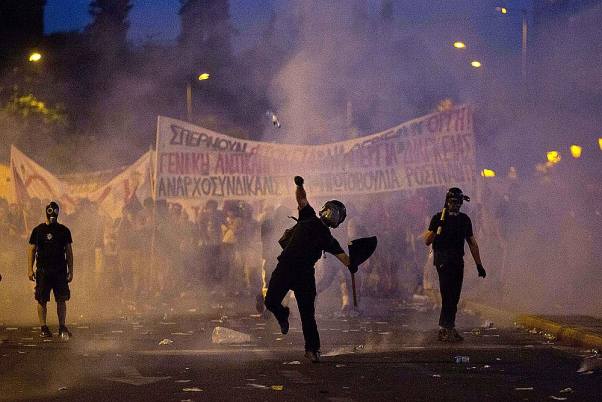 An anti-austerity protester throws a bottle at riot police in Athens. Greece's prime minister was fighting to keep his government intact in the face of outrage over an austerity bill that parliament must passif the country is to start negotiations on a new bailout and avoid financial collapse 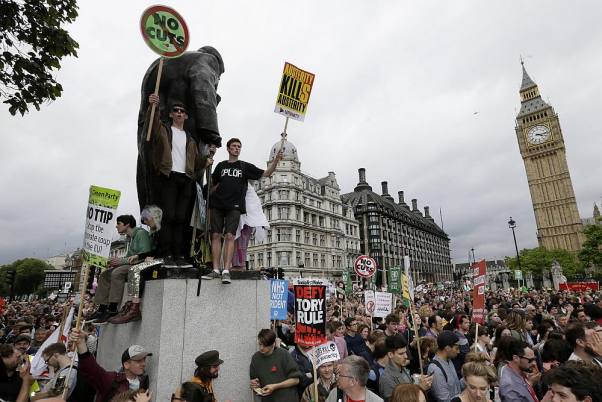 Demonstrators hold placards in Parliament Square as they march during a protest against the Conservative Government and it's austerity policies in London. 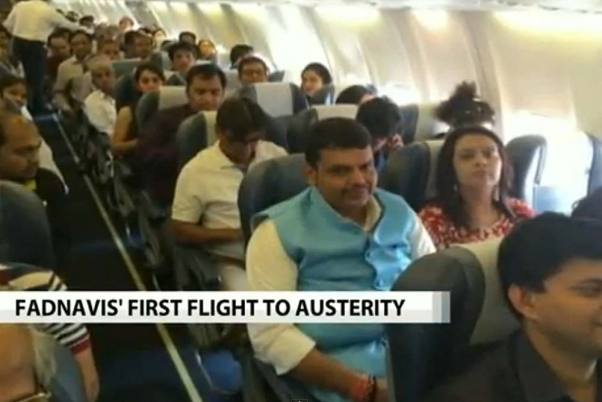 Devendra Fadnavis kicks off own austerity drive, travelled to Nagpur in economy class. 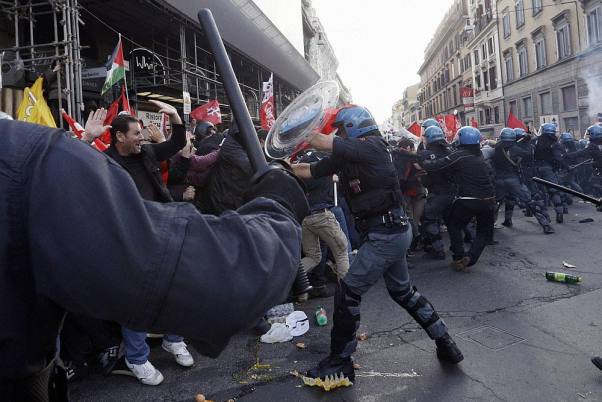 Demonstrators clash with police during an anti-austerity demonstration in Rome, Italy. The protest march was organised against high housing costs and joblessness as a result of Italy's long economic slowdown. The procession made its way peacefully through central Rome until more violent elements wearing helmets started throwing objects at police near the Labour Ministry. 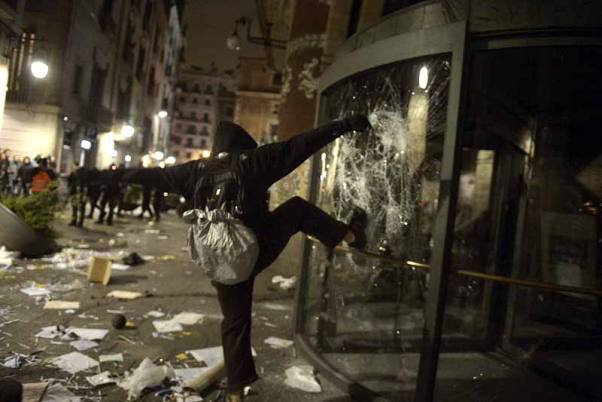 A demonstrator kicks the glass at the main entrance of "Palau de la Musica" during clashes following a demonstration during a general strike in Barcelona Spain. Spain's main trade unions stage a general strike, coinciding with similar work stoppages in Portugal and Greece, to protest government-imposed austerity measures and labor reforms. The strike is the second in Spain this year. 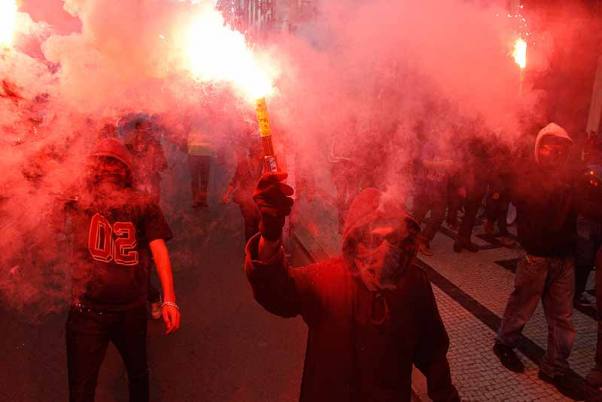 Protestors carry lit flares while marching towards the Portuguese parliament in Lisbon during a general strike. The second general strike in eight months in Portugal, where the government intends to intensify austerity measures next year, left commuters stranded as trains ground to a virtual halt and the Lisbon subway shut down. 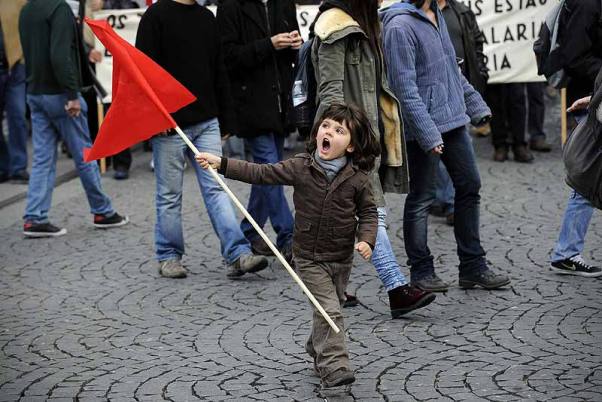 A toddler brandishes a red flag seen with demonstrators during a general strike in Porto, Portugal. The second general strike in eight months in Portugal, where the government intends to intensify austerity measures next year, left commuters stranded as trains ground to a virtual halt and the Lisbon subway shut down. 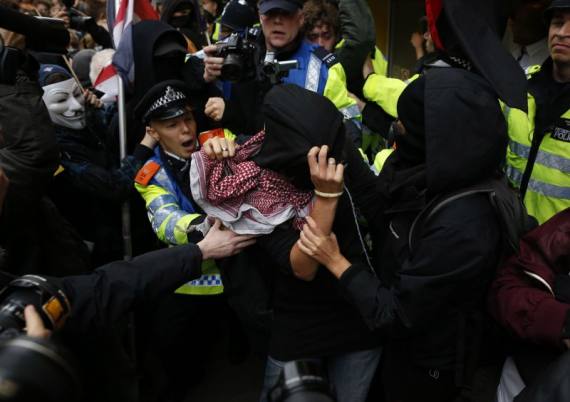 A British police officer holds a demonstrator outside a fast food restaurant during an anti-austerity protest march through central London. Tens of thousands of demonstrators descended on the British capital in a noisy but peaceful protest against a government austerity drive aimed at slashing the nation's debt. 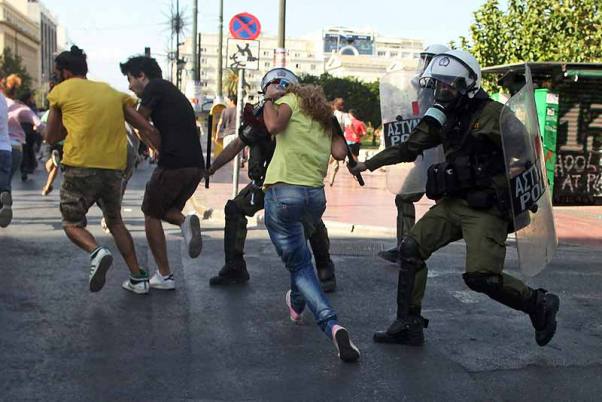 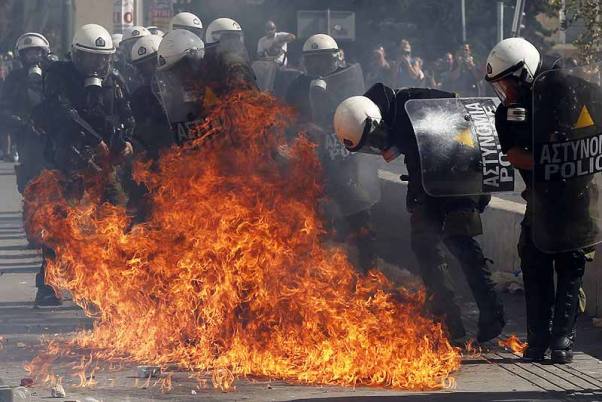 Protesters throw petrol bombs at riot police officers during a 24-hour nationwide general strike in Athens. Hundreds of youths pelted riot police with petrol bombs, bottles and chunks of marble as yet another Greek anti-austerity demonstration descended into violence. 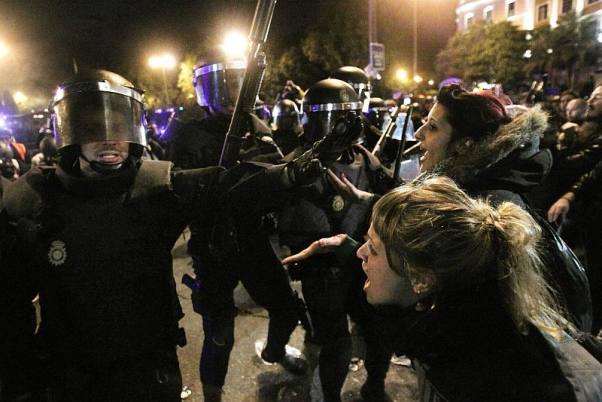 Police clash with protestors during a demonstration in front of the Parliament against austerity measures announced by the Spanish government in Madrid, Spain. 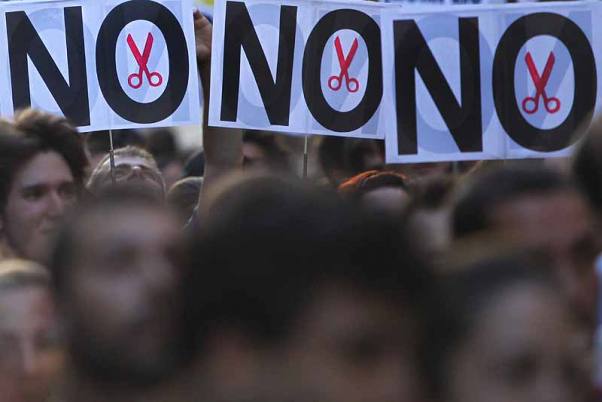 Demonstrators show a banner during a protest against the recent austerity measures announced by the Spanish government, in front of the Popular Party in Madrid, Spain. Thousands of demonstrators took to the streets to protest their second wave of wage cuts in as many years as the government prepared to approve austerity measures that include those reductions as part of a deficit-cutting plan to save euro 65 billion through 2015. 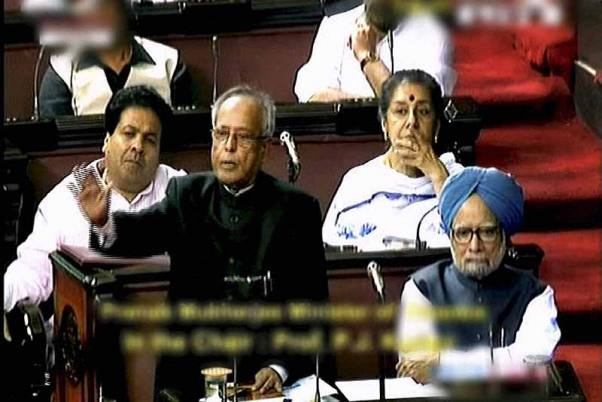 TV Grab: Union Finance Minister Pranab Mukherjee speaks in the Rajya Sabha in New Delhi. Citing the difficult economic situation, Pranab said the government would be resorting to a fresh spell of austerity measures to deal with the problems, but made it clear that he was not pressing "panic button". 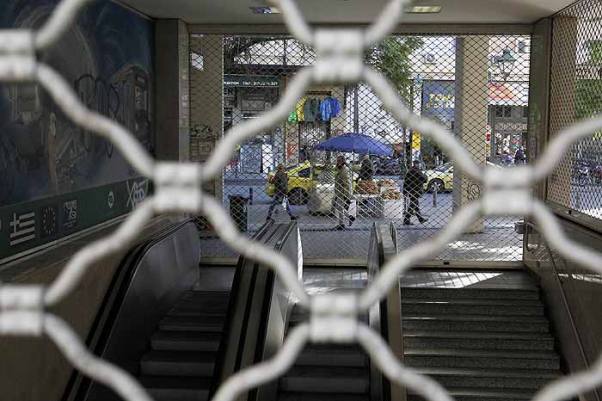 Pedestrians pass a closed metro station during a 24-hour strike in Athens. International debt inspectors visit Athens to review the course of Greece's austerity reforms. Unions call for strikes and work stoppages in some sectors in the Greek capital. 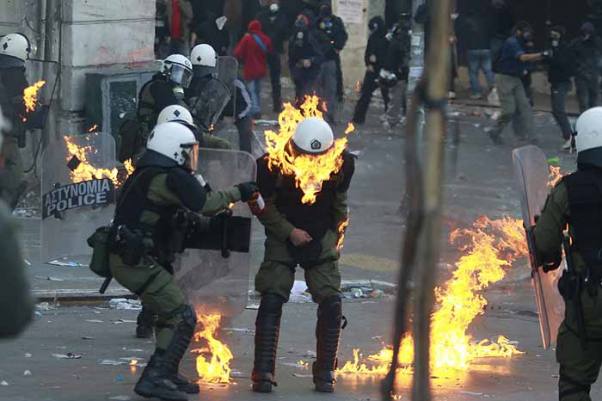 A Greek riot policeman tries to extinguish a fire after his colleague caught fire from a petrol bomb thrown by protesters during clashes in central Athen. 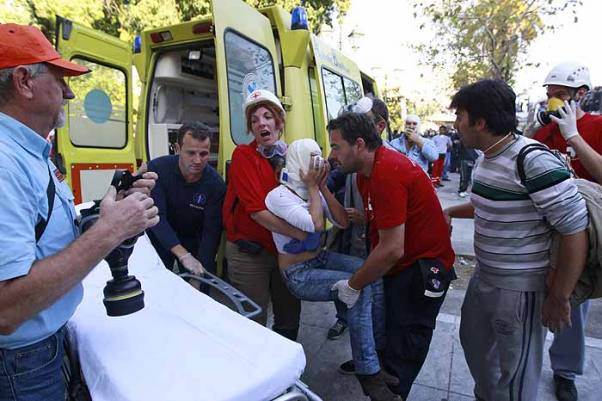 Paramedics carry a wounded woman to an ambulance at Athens' main Syntagma Square, during violent demonstrations. Clouds of tear gas choked central Athens as rival demonstrators fought with stones and firebombs outside parliament, leaving one man dead and dozens injured. 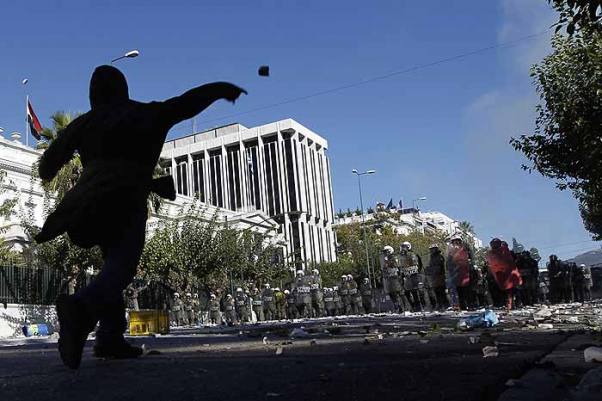 A protester throws a stone at Greek riot police, during clashes in central Athens. Greek anger over new austerity measures and layoffs erupted into violence, as demonstrators hurled chunks of marble and gasoline bombs and riot police responded with tear gas and stun grenades that echoed across Athens' main square. 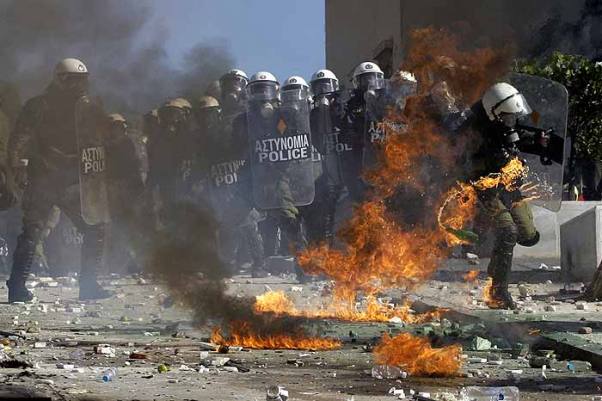 A fire bomb explodes as a riot policeman tries to avoid the fire during clashes outside the Greek Parliament. Greek anger over new austerity measures and layoffs erupted into violence, as demonstrators hurled chunks of marble and gasoline bombs and riot police responded with tear gas and stun grenades that echoed across Athens' main square. 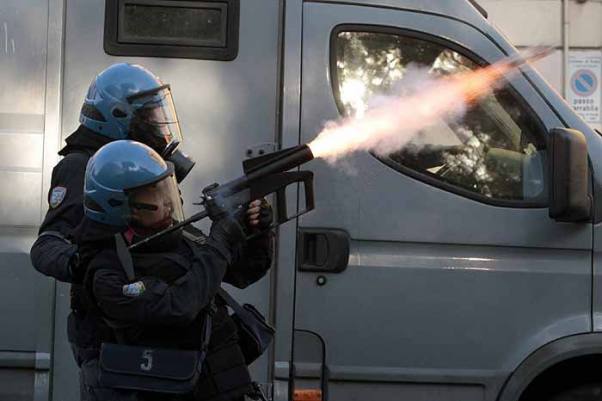 Police officers fire tear gas in Rome. Protesters in Rome smashed shop windows and torched cars as violence broke out during a demonstration in the Italian capital, part of worldwide protests against corporate greed and austerity measures. The "Occupy Wall Street" protests, that began in Canada and spread to cities across the U.S., moved to Asia and Europe, linking up with anti-austerity demonstrations that have raged across the debt-ridden continent for months. 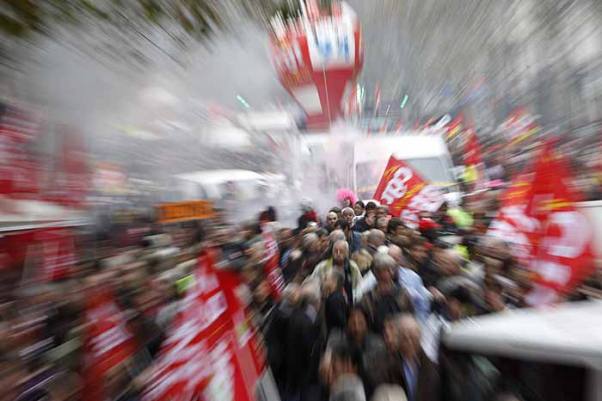 Workers of the public and private sectors demonstrate in Paris, during a national day of strike against government austerity measures. President Nicolas Sarkozy's conservative government says the cost-cutting measures are essential to reducing the country's debts and allowing France to remain a pillar of the troubled eurozone. 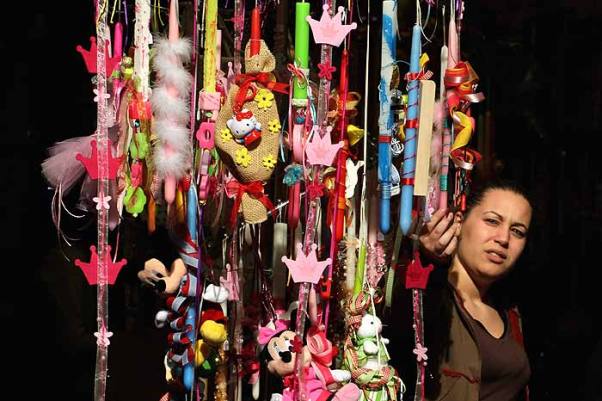 A woman working on a gift shop displays Easter candles, in central Athens. Nearly a year after Greece was rescued from bankruptcy by an international bailout, the country's businesses are reeling from stringent austerity measures imposed as a means to pull the economy out of its debt hole. As Greeks see their disposable income shrink, the National Confederation of Hellenic Commerce says 65,000 small and medium-sized enterprises shut down last year. 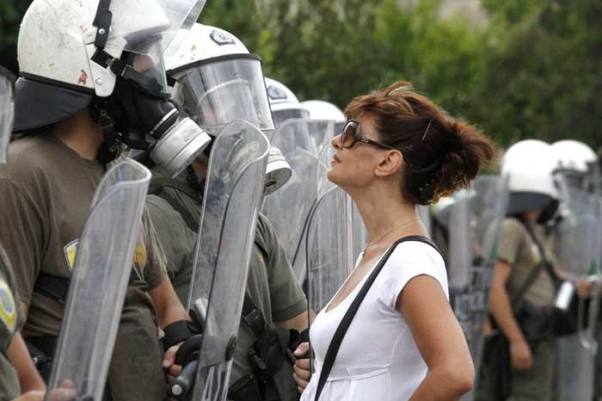 A protester confronts riot police outside parliament during a rally in central Athens. The Greek government is battling growing discontent over a new round of economic austerity, with fresh strikes, public hostility, and party dissent testing the nation's ability to make it out of its debt crisis. Unions staged their sixth general strike this year _ halting public transport and services, stopping ferry departures and closing schools, newspapers, courts and public hospitals. 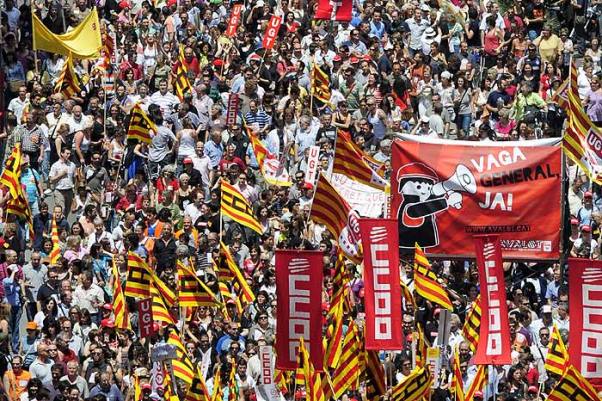 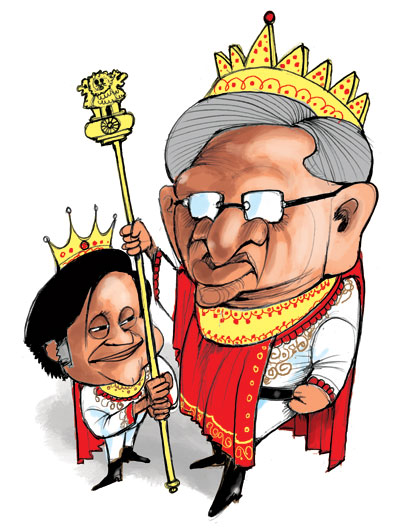 “The Leading Hotels of the World” loyalty points to foreign minister S.M. Krishna and his deputy, Shashi Tharoor, for enjoying the “unparalleled comfort offered by member-hotels to a discriminating few”, at their own expense.