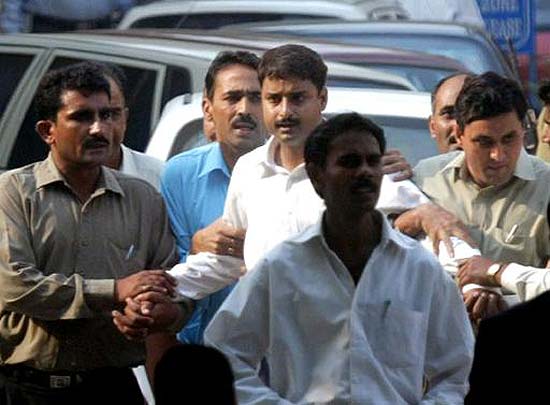 Monday 30 October
Ten years after the rape and murder of 23-year-old law student Priyadarshini Mattoo and ten days after convicting Santosh Kumar Singh for the crime, the Delhi High Court has sealed the fate of the convict by awarding death penalty saying he deserved nothing less. Pronouncing the quantum of punishment in a jam-packed courtroom, Justice R S Sodhi and Justice P K Bhasin said, "We are of the opinion that for a crime of this sort, which has been committed with pre-meditation and in a brutal manner, the convict deserves no other sentence but death". Singh, now a practising lawyer, married and father of a girl child, had escaped from the clutches of law when the trial had in 1999 acquitted him with the sessions judge remarking that he knew that Singh was guilty but was letting him free because of lack of evidence. A sustained public outcry and a media campaign against the acquittal led to an appeal in the High Court which culminated in the conviction and death sentence. Priyadarshini Mattoo's father Chaman Lal Mattoo has welcomed the death sentence saying it would serve as a deterrent to those who indulge in such heinous crimes. 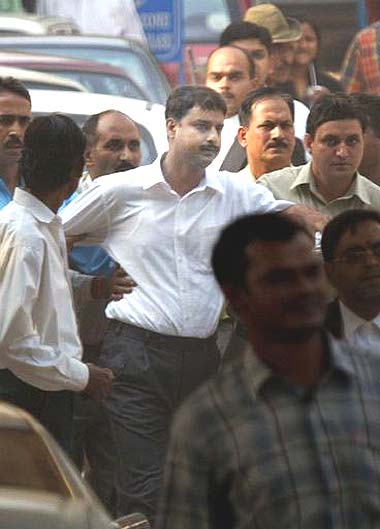 Santosh Kumar Singh is taken away by CBI sleuths after he was convicted by the Delhi High Court in New Delhi. In a triumph for people's outcry for justice, the High Court today set aside a "perverse" lower court judgement and convicted the former IPS officer's son for raping and murdering 23-year-old Priyadarshini Mattoo nearly 11 years ago. Declaring that the trial court's acquittal of Santosh, a practicing lawyer now, in 1999 had "shocked the conscience of the judiciary", Justices R S Sodhi and P K Bhasin, who conducted rare day-to-day hearings over just 42 days, convicted him under Sections 302 (murder) and 376 (rape) of the Indian Penal Code. The sentence -- death or life impisonment -- will be pronounced on October 30. Santosh's acquittal by Additional Sessions Judge G P Thareja on December 3, 1999 had shocked the nation because the judge had said that he knew the accused had committed the crime but gave him the benefit of doubt because of lack of evidence. The CBI, which has come in for a great deal of flak from the media and the judiciary for its handling of the case, had appealed against the lower court's verdict on February 29, 2000. Priyadarshini's family and friends have hailed the verdict as a "victory of the judicial system". 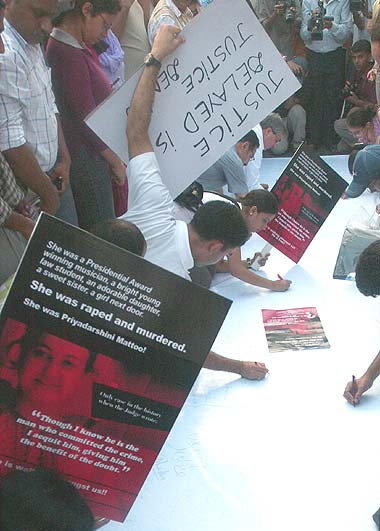 Friday 28 July
Will the law ever catch up with the guilty? Will the victims get justice? Will middle-class Delhi's activism and outrage over the Jessica Lall case help victims in two other equally egregious cases? Amidst public protests and media campaigns to reopen the Priyadarshin Mattoo rape and murder case, the Delhi High Court has finally admitted the appeal filed by the CBI seeking an early hearing of the application filed against the acquittal of Santosh Singh, son of a top IPS officer charged with committing the crime. Mounting pressure on the investigating agency, celebrities, relatives and friends of Mattoo joined hundreds across the country on Sunday seeking justice for the slain law student on her 36th birthday. Meanwhile, in the Jessica Lall murder case, the same bench of the Delhi High Court has ordered the Delhi Police to complete its probe in two months on the bungling of evidence that eventually led to the acquittal of all the nine accused. In the third case of a similar kind, where the accused -- being the son and nephew of an influential and powerful former MP, D.P. Yadav -- remain unpunished, there seem an agonisingly slow sign of movement with a Delhi court allowing the police to begin the process for declaring Bharati Yadav, a key prosecution witness, a proclaimed offender.