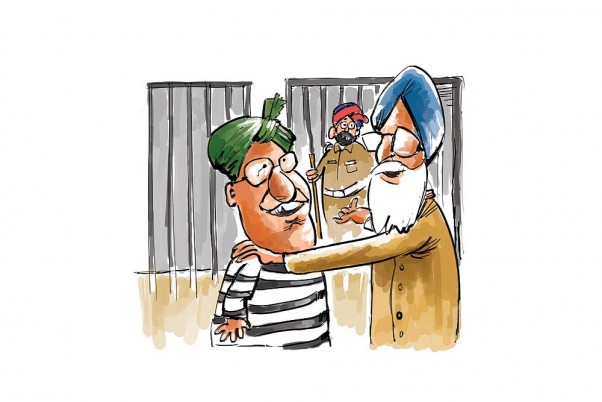 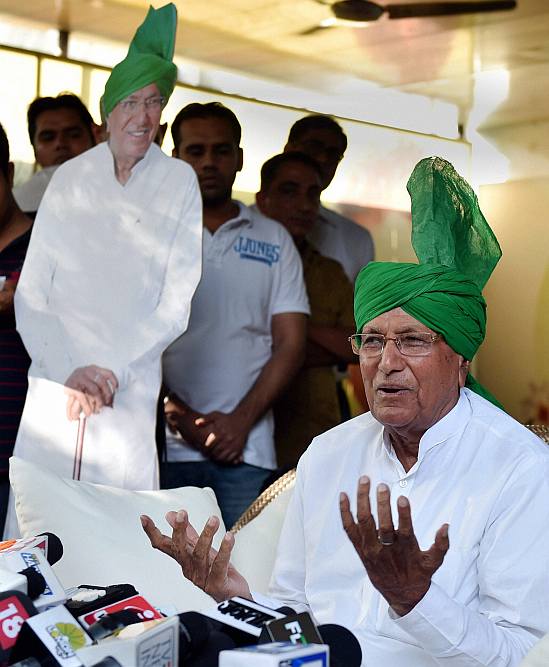 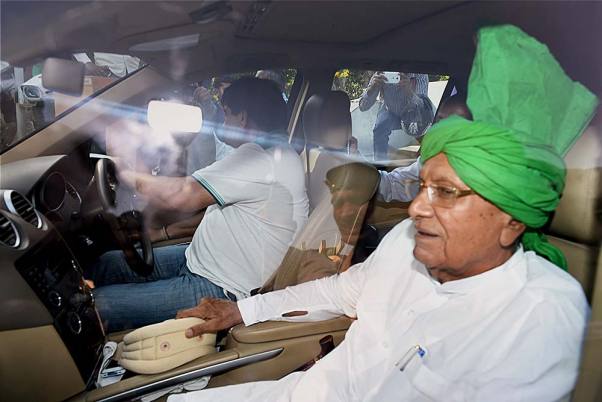 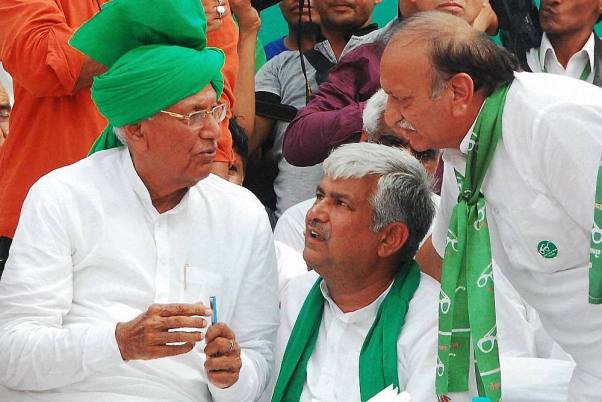 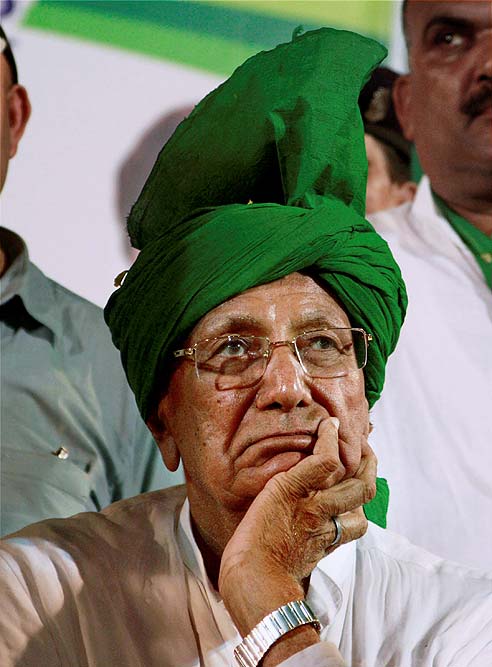 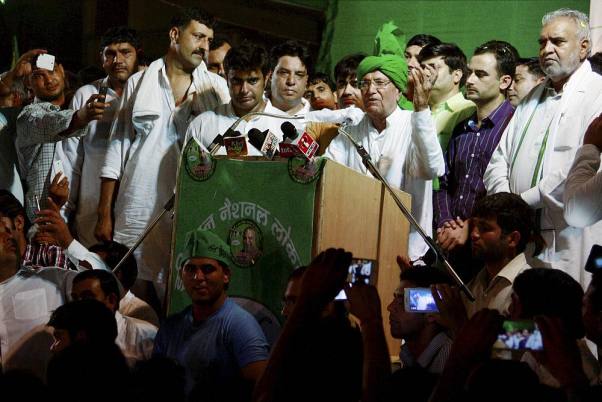 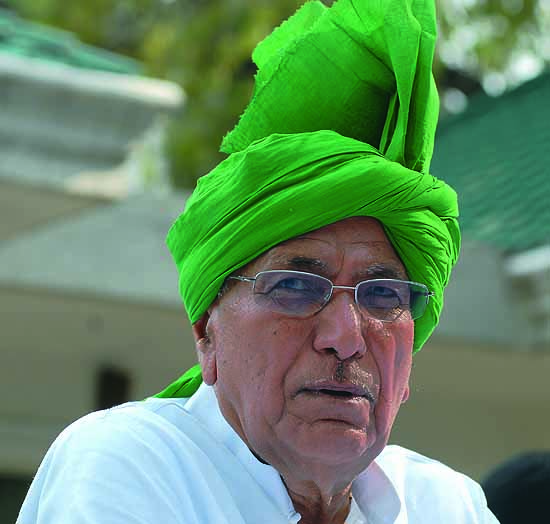 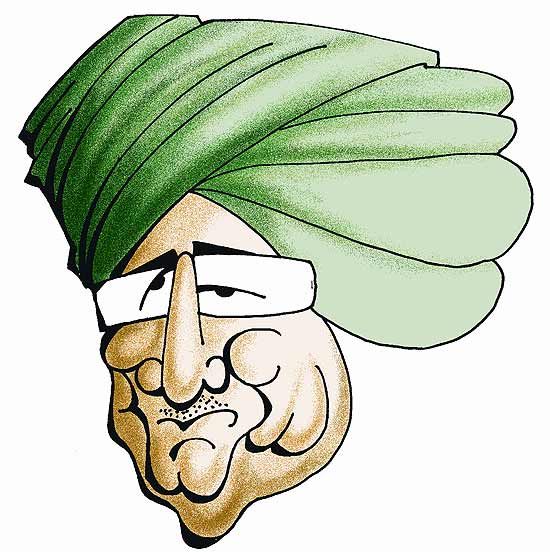 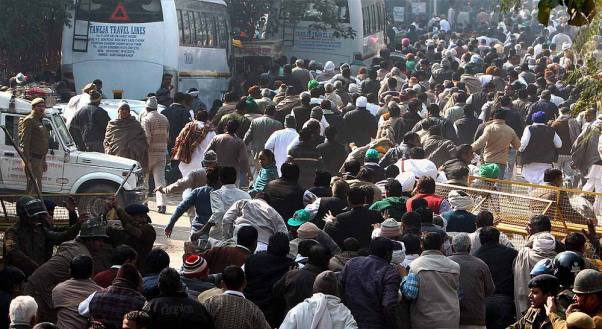 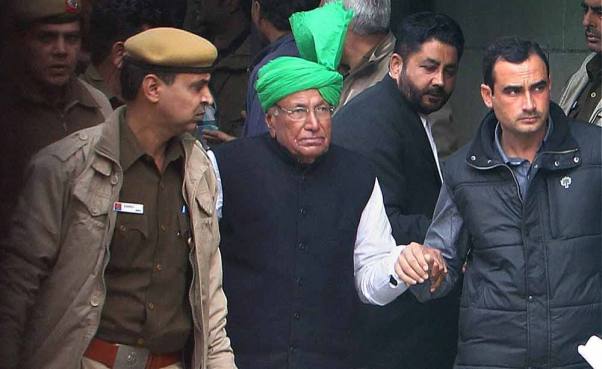 File: In a judgement that could have electoral ramifications in Haryana, former Chief Minister Om Prakash Chautala and his son Ajay Chautala were today sentenced to 10 years imprisonment for corruption in a teachers' recruitment scam amidst scenes of violence by his supporters in a Delhi court complex. 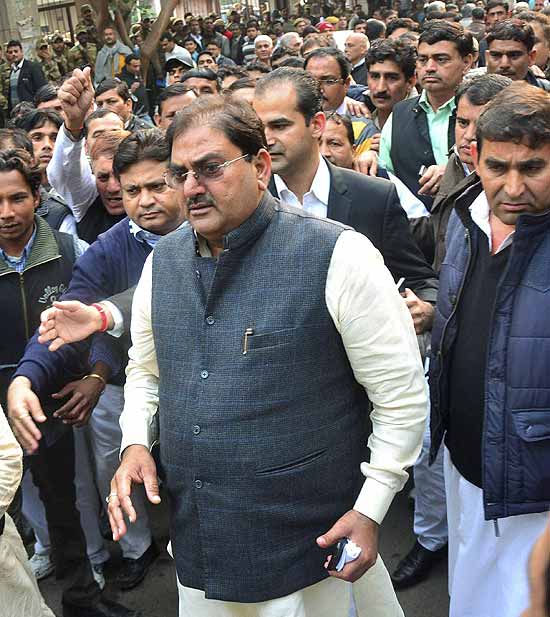 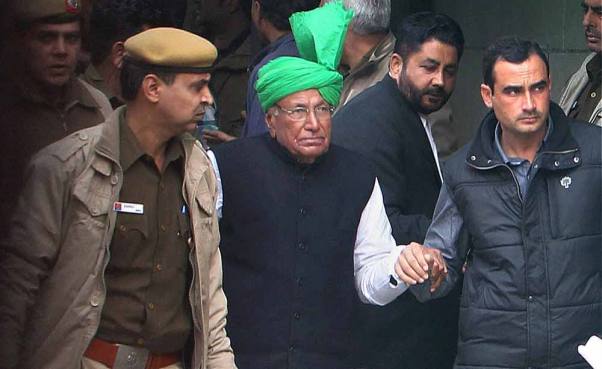 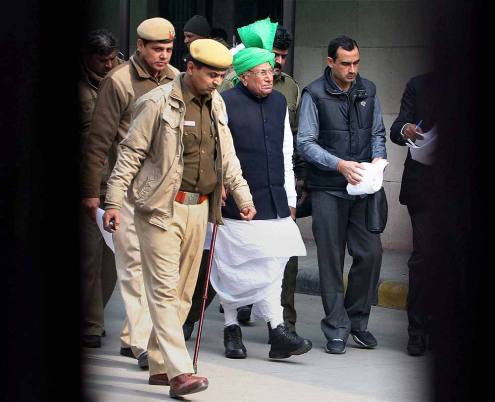 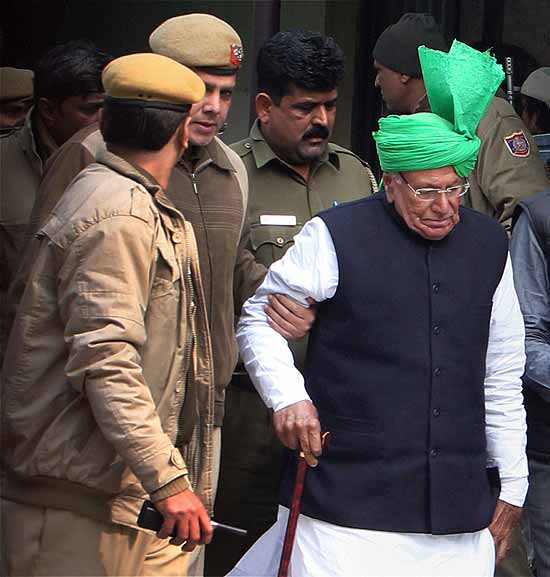 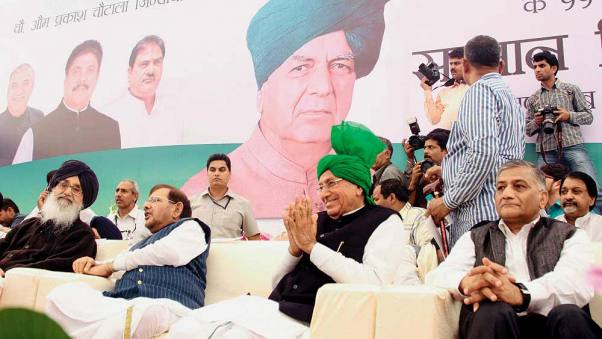 Civvy joust Gen V.K. Singh with Chautala, Badal and others at a farmers’ rally in Haryana, Nov 2012 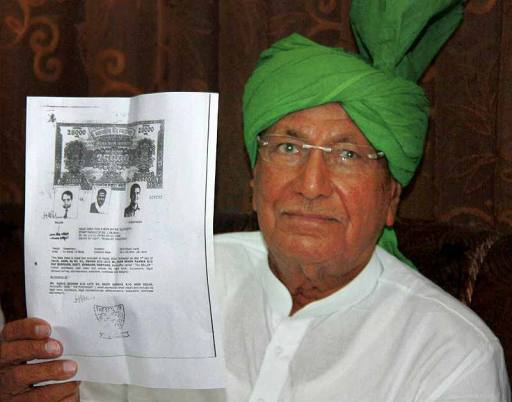 Former chief minister of Haryana Om Prakash Chautala shows the registry papers having the photos of Rahul Gandhi to the media during a news conference in Gurgaon. Chautala had accused Rahul of tax evasion in the purchase of land in a village in Palwal district. 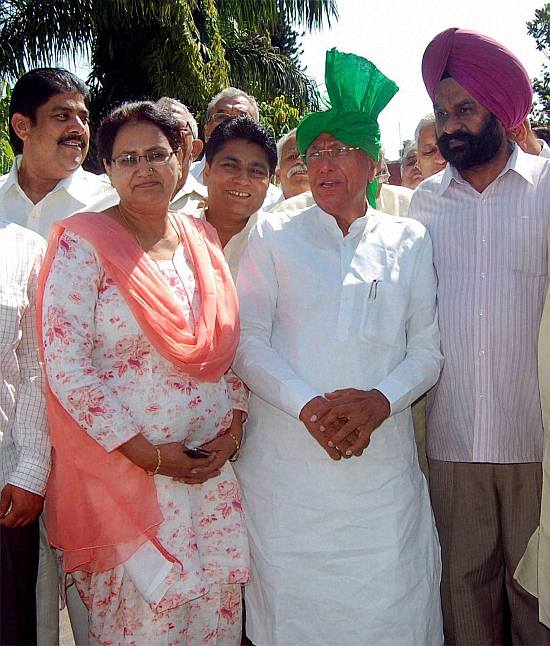 INLD chief Om Parkash Chautala and other members coming out of the Haryana Raj Bhawan in Chandigarh after meeting the Governor. 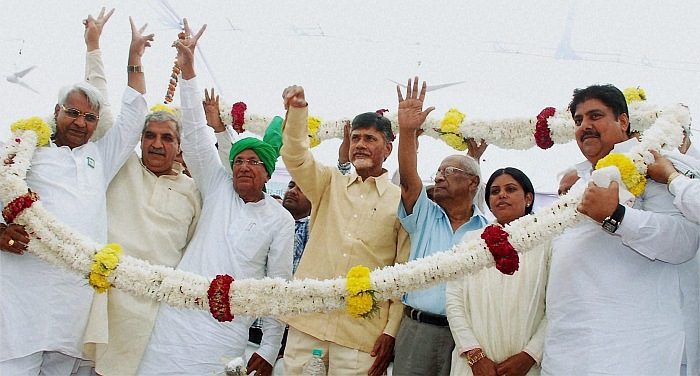 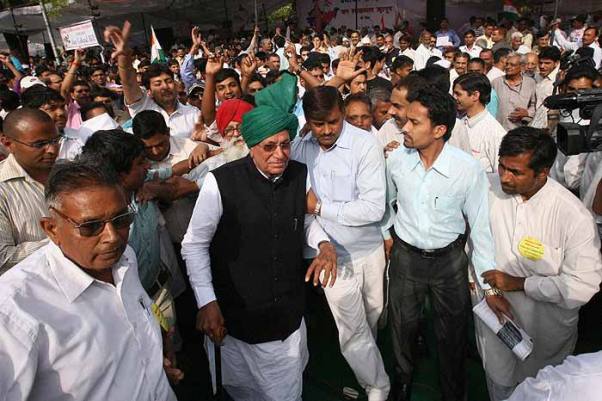 Politician Om Prakash Chautala walks back after supporters of social activist Anna Hazare, who is sitting on a indefinite fast demanding 'Jan Lokpal Bill', requested him not to meet Hazare at Jantar Mantar in New Delhi. 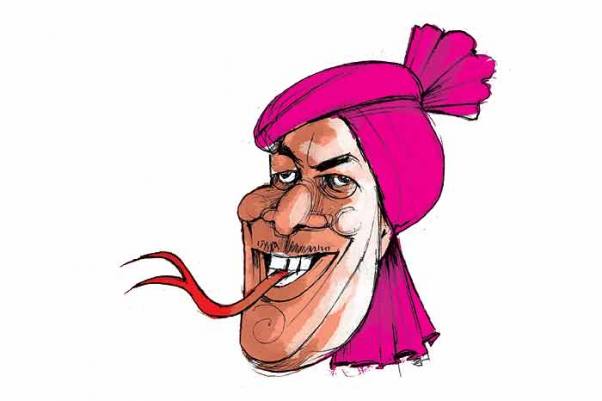 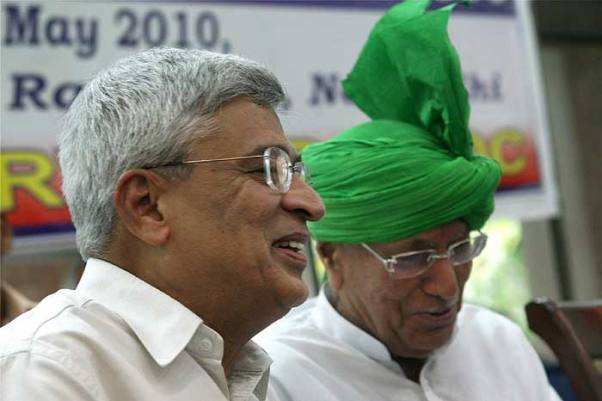 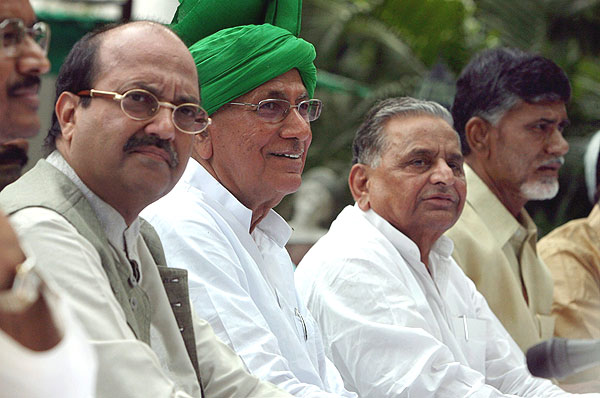 United National Progressive Alliance (UNPA) leaders (L-R) Amar Singh, Om Prakash Chautala, Mulayam Singh Yadav and Chandrababu Naidu during a press conference when they were still professing togetherness. But they are together no more. In a neat somersault, the Samajwadi Party stepped in to support the UPA before the Left withdrawal of support became final, enabling the Congress to take the nuke deal forward. The SP duo of Mualayam and Amar Singh now claim that they are doing it in the "national interest". It's a different matter altogether that Amar Singh could not even prevent himself from a bit of spokesmanship on behalf of one, and against the other, Ambani brother even to the media. And of course there were those routine noises against the finance and petroleum ministers. And of course he finally thought the time was right to share with the country how BJP's Jaswant Singh had made an offer to support anyone from the UNPA for prime ministership in exchange for voting against Pratibha Patil during the presidential campaign... But as we write, the grapevine in Delhi is abuzz with the ability of the duo to keep their flock together. Behan Mayawati is standing on the sidelines expressing her concern for how the deal is anti-Muslim and there is talk that some of the SP MPs may defy the party whip... Never a dull moment in Byzantine Delhi... Also See: Samajwadi Party 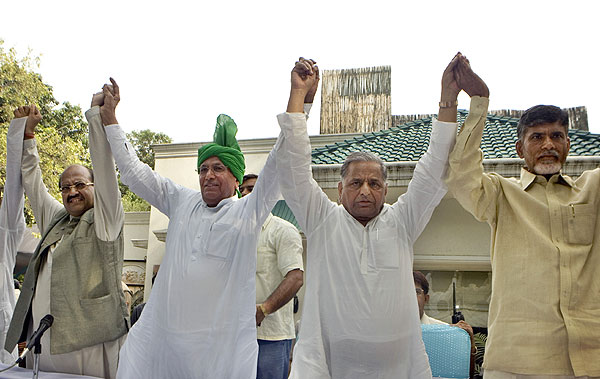 United we stand, atleast for the meanwhile... United National Progressive Alliance (UNPA) leaders, from right, Chandrababu Naidu, Mulayam Singh Yadav, Om Prakash Chautala and Amar Singh hold hands at a press conference after a meeting in New Delhi. The UNPA leaders were dissatisfied even after clarifications issued by the Prime Minister's Office on the deal and wish to consult eminent scientists before deciding their stand. Chautala said the UNPA will not give "any certificate" for the deal before PM Manmohan Singh goes to G-8 summit in Japan on July 7, 2008. 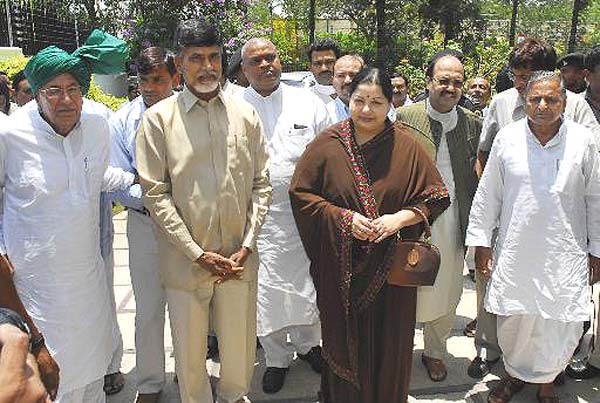 Former Chief Minister of Andhra Pradesh and TDP president N.Chandrababu Naidu poses for a photograph with former Chief Minister of Haryana Om Prakash Chautala, former Chief Minister of Tamil Nadu, Jayalalitha, and former Chief Minister of Uttar Pradesh, Mulayam Singh Yadav, as they arrive for a meeting at Naidu's residence in Hyderabad. Two years ahead of the general elections, a group of eight regional parties launched a new national front as an alternative to the Congress and BJP. The announcement came after a three hour meeting hosted by Naidu and the name, organisational structure and other details of the front are expected to be worked out soon. The conclave of the parties was attended by Jayalalithaa (AIADMK), Mulayam and Amar Singh (Samajawadi Party), Brindavan Goswami (Asom Gana Parishad), Chautala (Indian National Lok Dal), Babulal Marandi (Jharkhand Vikas Morcha) and Vaiko (MDMK) while K J Thomas of Kerala Congress sent a letter of support. The conclave comes at the backdrop of the TDP recently announcing that it would take the initiative in forging a Third Front based on "an alternative economic policy". 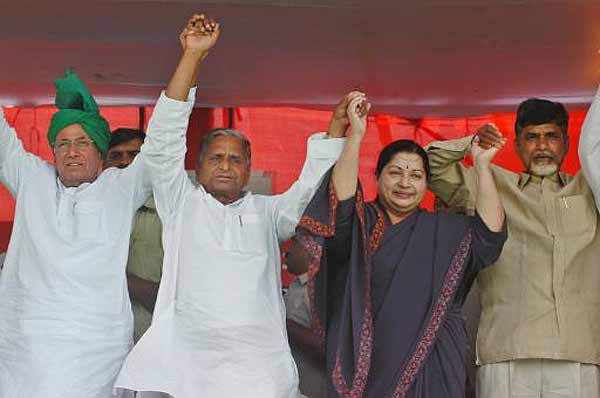 Monday 23 April
So will he also join the other former chief ministers who campaigned in his party's rally in Allahabad? Incumbent UP Chief Minsiter Mulayam Singh Yadav is seen here with former Haryana Chief Minister Om Prakash Chautala, former Tamil Nadu CM Jayalalitha and former Andhra CM Chandra Babu Naidu. Jayalalitha, making a full-length speech in Hindi for the first time in her political career, launched a scathing attack on Congress chief Sonia Gandhi saying "Srimati Sonia Gandhi ka jigri dost, uska rishtedar Ottavio Quattrochi hamare desh ki janta ke paise ko London bank se lekar bhag gaya. (Sonia's friend and relative Quattrochi has taken away Indian public money from a London Bank and run away)". Reading out a prepared speech, 'Amma' also waxed poetic: "Yaad rakhiye, ek hai Mulayam is vatan mein, ek hai chanda jaise gagan mein" (Remember, there is only one Mulayam, just as there is one moon in the sky). Later, while talking to reporters, the AIADMK leader said she was not at all nervous while speaking in Hindi for the first time in her 25-year-long political career as it was her second language in school.