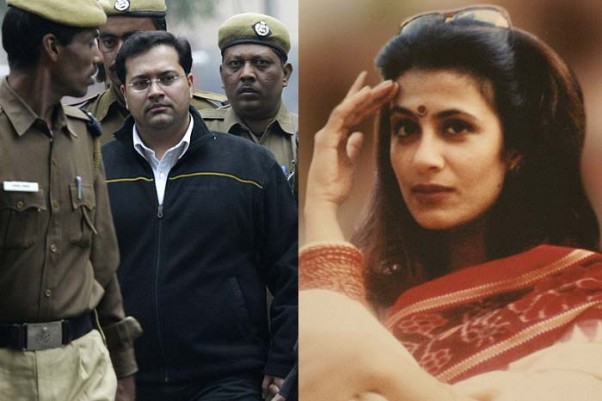 Left Manu Sharma, walks to a jail van, at the Delhi High Court after being sentenced to life imprisonment for the 1999 murder of former model Jessica Lall in New Delhi. The Supreme Court today upheld the conviction and life imprisonment awarded to Manu Sharma, son of senior Congress leader and former Union Minister Venod Sharma, in the murder case. 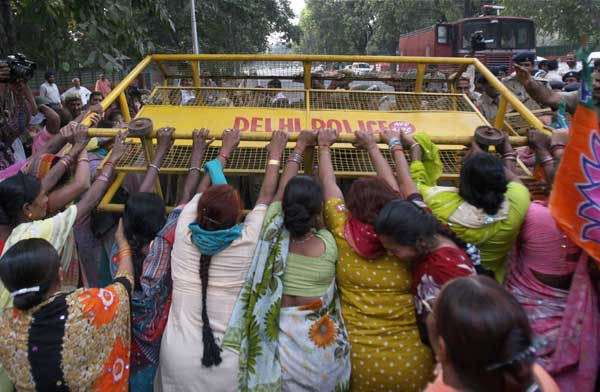 BJP Mahila Morcha activists push a barricade while being stopped by the police during a protest march against the parole of Manu Sharma, convicted in the Jessica Lall murder case, outside Delhi CM's residence in New Delhi. 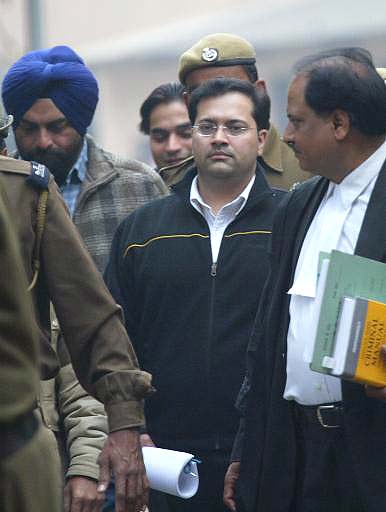 Manu Sharma and Amardeep Singh Gill walk towards a jail van at the Delhi High Court in New Delhi. Sharma, the killer of model Jessica Lall who had escaped the clutches of law with the trial court acquittal, was today given life imprisonment by the High Court which rejected prosecution demand for death sentence, saying the murder was though "intentional" but "not pre-meditated". Seven years after the 32-year-old model was shot dead while working at a restaurant here as a bartender, Justice R S Sodhi and Justice P K Bhasin while delivering the sentence in a jam-packed court room said "though the case has shaken the conscience of the society yet it cannot be held that the convict (Manu) deserved maximum punishment (death)". Two other convicts Vikas Yadav, an accused in the Nitish Katara murder case and Amardeep Singh Gill alias Tony, an executive with a MNC, were sentenced to four years imprisonment with a fine of Rs 3000 each for conspiring to destroy evidence. Sharma, who surrendered after his conviction on Monday, was also imposed a fine of Rs 50,000. The court also issued notices to 32 witnesses, including Shyan Munshi, a model-actor, and Andaleeb Sehgal, businesssman facing probe in Iraqi oil-for-food scam, for turning hostile in the case.