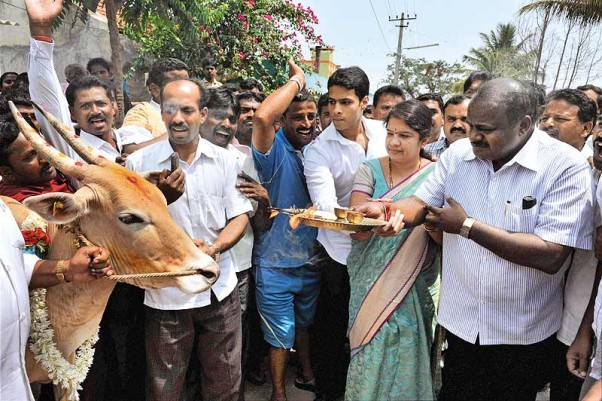 Mooo... Kumaraswamy and family offer prayers before casting their vote in Ramnagar 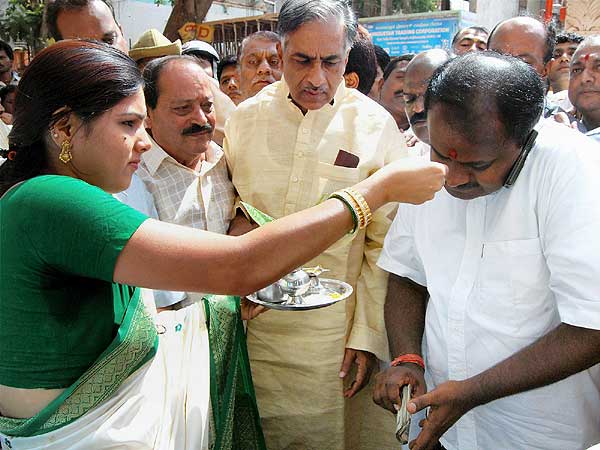 Sunday May 18, 2008
Will he play spoilsport again? Or would there be a clear decisive verdict in Karnataka? A woman offers 'prasad' to former Chief Minister of Karnataka H D Kumaraswamy during an election campaign in Hubli. Campaigning for the third and last phase of Karnataka Assembly polls has come to an end on May 20, 2008. Karnataka registered a good voter turn out of 66 per cent in 89 of the total 224 assembly seats in the first phase of elections on May 10 and 60 per centin the second phase on May 16. Counting of votes will take place on May 25. Also See: Democracy Of The Few 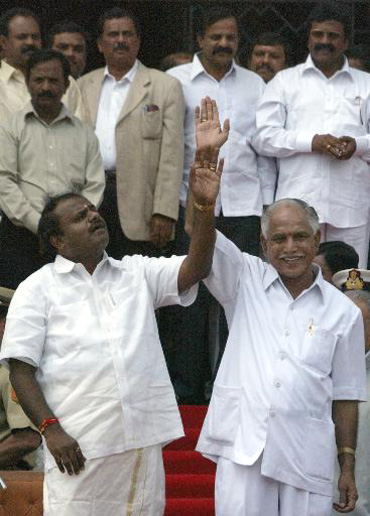 Karnataka's new Chief Minister H.D. Kumaraswamy and new Deputy Chief Minister B.S. Yediyurappa wave to acknowledge cheers from the crowd after they were sworn in at a ceremony in Bangalore. A two-member BJP-JDS coalition government assumed office, ending a fortnight long political uncertainty that paved the way for the saffron party to be in the saddle for the first time in the South. While outgoing Chief Minister Dharam Singh and BJP leaders including president Rajnath Singh and H N Ananth Kumar attended the function, JD(S) supremo H D Deve Gowda who firmly opposed the tie-up with the BJP, boycotted the ceremony. 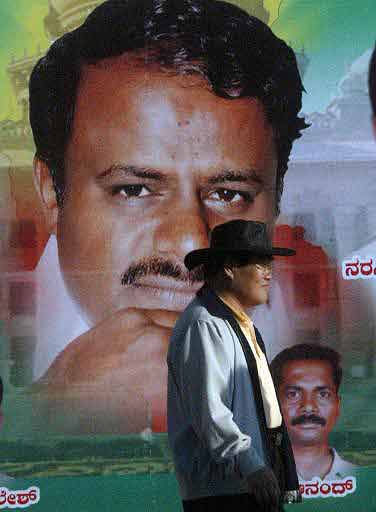 A tourist walks past a poster of Chief Minister designate H.D. Kumaraswamy in Bangalore. New-found partners, BJP and JD(S) rebel group would take over the reins of administration tomorrow in a climax of the political drama that saw the exit of the Congress-JD(S) ministry led by Dharam Singh. In accordance with the power-sharing pact between the two parties, JD(S) supremo Deve Gowda's son Kumaraswamy would take oath as the 18th Chief Minister and senior BJP leader B S Yediyurappa as the fifth Deputy Chief Minister. For the BJP, it would be a political watershed as Karnataka would be the first state in the South it would be ruling. 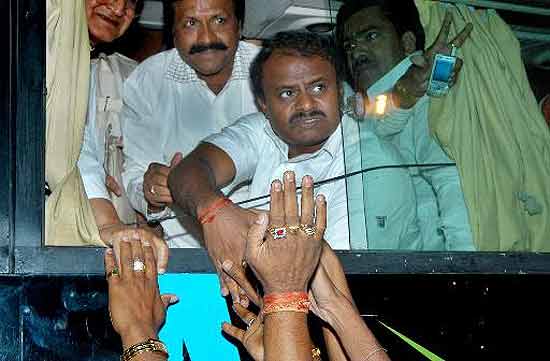 Janata Dal (S) leader H. D. Kumaraswamy is congratulated by supporters as he leaves in a bus after meeting the Karnataka Governor in Bangalore. The Congress-JD(S) coalition government appeared to be on the brink after H D Deve Gowda's son Kumaraswamy revolted against his father and led a group of about about 40 MLAs who withdrew support to the Dharam Singh ministry. On a day of fast-paced developments, the Kumaraswamy faction broke ranks to team with the BJP, the single-largest party in the 224 member House, to stake claim to form the government. Accompanied by BJP state unit president Jagdish Shettar and its legislature party leader B. S. Yediyurappa, Kumaraswamy went to the Raj Bhavan to meet the Governor and stake the claim. JD-S leaders say the deal with the BJP is to run a rotational government, similar to the one in Jammu and Kashmir.