Parties slam Farooq for suggestion on mediation in Kashmir

"It is being said there should be discussion on Kashmir with China and Pakistan but my opinion is that Kashmir is India and India is Kashmir and this is our internal matter our internal business and no one should interfere in it," he said 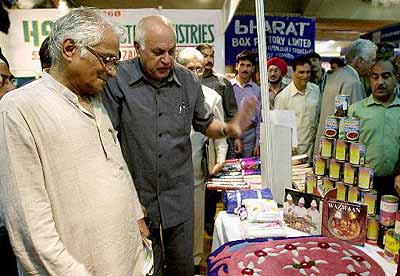 Former Jammu and Kashmir chief minister Abdullah had suggested that India should take the help of "friends" to resolve the Kashmir issue, drawing sharp reactions from the parties.

"Abdullah must stop advancing Pakistan's fake nuclear blackmail. Out of power, Abdullah is speaking the language of separatists and of Pakistan. His flip-flops on Kashmir reek of hypocrisy," BJP spokesperson G V L Narsimha Rao said.

He said Abdullah must tell "his friends" in Pakistan to stop exporting terror and meddling in Kashmir.

Shiv Sena leader Arvind Sawant also "deplored" Abdullah's comment, saying, "Kashmir is our issue. Kashmir is India's and we will resolve the issue within the country. Nobody else is required to intervene in our matter".

Union minister Giriraj Singh said it is the government's clear policy that it will "not tolerate any intervention" from a third party on the Kashmir issue.

"Till Pakistan keeps on funding terrorists, there would be no talks with Pakistan," he said.

"What do you mean by third party? What is the stand of the entire country? What is the resolution of Parliament?" he questioned, wondering whether Abdullah wants India to "bend its knees before Pakistan".

"I condemn this. I will ask him to apologise for such comments," he added.

BJP MP Subramanian Swamy said, "In my opinion Farooq Abdullah should go to some third country...He is not talking in favour of India. Even Pakistan will not accept him".

Claiming that dialogue was the only solution for Kashmir, Abdullah had said, "The way out is through dialogue. Use your friends... Use them for dialogue to resolve the issue".

"Till what time should we wait? Should we wait for a thousand years? You have to take the bull by the horns. You have to do it sometimes. They (Pakistan) have atom bomb, so have you. How many people will you kill? This is not the way," he had said.

"How many more wars will you fight? How much more will you damage India? The money you spent on buying planes, materials for forces ... If you spend it on poor farmers, India will prosper," he said.