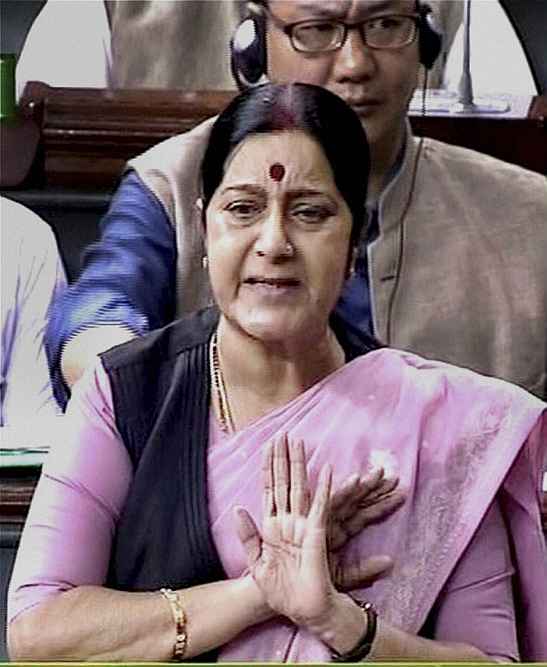 "Our region is vulnerable to a variety of disasters due to its geo-climatic conditions. To build regional capacities, India is hosting the first BIMSTEC Disaster Management Exercise in October 2017. This will help us develop quicker, coordinated and comprehensive responses to disasters, and provide timely relief and rehabilitation," Swaraj said at the 15th BIMSTEC Ministerial Meeting in Kathmandu.

She said BIMSTEC is a natural choice for India to fulfil its key foreign policy priorities of 'Neighbourhood First' and 'Act East'.

"We are meeting in a landmark year, when BIMSTEC is observing its 20th anniversary. BIMSTEC brings together like-minded countries with a common commitment for prosperity of its people representing one-fifth of world humanity. BIMSTEC is also one of the fastest growing regions in the world," Swaraj said.

"BIMSTEC enjoys the unique strengths of connecting South and South-East Asia. It links the ecologies of the Himalayas and the Bay of Bengal. With shared histories, values and ways of life, it is the natural platform, to build our common future. BIMSTEC represents our common desire for peace and development," she added.

Recalling the BRICS-BIMSTEC Outreach Summit in Goa last year, Swaraj said the leaders during the summit had had pledged to make BIMSTEC stronger, more effective and result oriented and agreed on an action agenda to achieve greater connectivity, trade, people-to-people contacts, and sustainable use of resources.

Speaking about the outcome of the first meeting of BIMSTEC National Security Chiefs in New Delhi this yea, she said holistic approach was adopted to tackle traditional and non-traditional security challenges, which threaten the region.

"We worked out collective strategies to counter the scourge of terrorism, violent extremism & transnational crimes, as also to strengthen our maritime & cyber security cooperation. Specific follow-up measures in these areas are now under progress," she said.

Asserting that Intra-regional tourism got a boost with the launch of the BIMSTEC Network of Tour Operators recently in New Delhi, Swaraj said that this first-of-its kind platform has brought industry and stakeholders from across the region together.

Swaraj also informed that New Delhi has further liberalized its tourist e-visa visa norms, which makes it easier for foreign tourists to visit neighbouring countries when they are on a trip to India.

Emphasising that enhanced connectivity is vital to achieving BIMSTECH's common goals of growth, employment & prosperity, she said there is there is need to put in place the enabling soft infrastructure such as the Framework Agreement on Transit, Trans-shipment and movement of Vehicular Traffic; & the Agreement on Coastal Shipping, at the earliest to achieve smoother cross-border flows of trade and people.

"Energy is considered the engine of economic development. Our region is blessed with abundant energy resources. I am happy to note, that cross-border exchange of power between India, Nepal, Bhutan & Bangladesh is on a rapid upswing. The BIMSTEC MOU on Grid Interconnection, which has been finalized, would further facilitate regional energy trade. In India, a massive programme to harness renewable energy is transforming our energy landscape. Let us build a strong renewable energy partnership to tackle climate change together, for a greener world tomorrow," she said.

Swaraj said that this network brings together ten top hospitals and medical institutes in the region to provide cutting edge tele-medicine services.

She said tThe BIMSTEC Task Force on Traditional Medicine would be meeting in India in October 2017 to strengthen the role of traditional medicine for holistic health care.

"To mark the 20th Anniversary, India is undertaking a wide range of initiatives, involving a number of institutions, industry associations, and think-tanks as stakeholders in BIMSTEC. These include high level multi-sectoral conferences; a trade and tourism expo; a Start-up Summit to boost innovation by bringing start-ups from the region together; a business conclave to showcase ready-to invest projects; and festivals on our Buddhism heritage and for our youth. These initiatives would not only promote trade, investments, innovation and people-to-people contacts, but would also enhance the visibility of "Brand BIMSTEC". We look forward to your presence in these events," she said. (ANI)

More Than 29 Million Hydroxychloroquine Doses Bought By US Come From India: Donald Trump