Mohamed Morsi, 67, hailed from Egypt's largest Islamist group, the now outlawed Muslim Brotherhood, and was elected president in 2012 in the country's first free elections following the ouster the year before of longtime autocrat Hosni Mubarak.

No One Listens To The Sole Superpower

Ever fewer countries, allies, or enemies, are paying attention, much less kowtowing, to the once-formidable power of the world’s last superpower. The list of defiant figures is lengthening.

A dictator, inability to compromise and resurgence of the Sunni-Shia divide threaten Syria

Having experienced the shock and grief of the Boston bombings, cannot we in the US empathise more with Iraqi victims and Syrian victims? 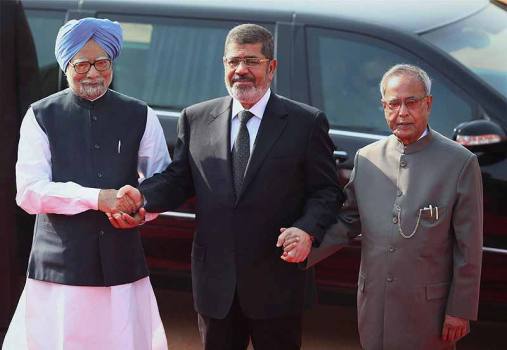 The MEA official spokesperson on the resolution on Sri Lanka, the provisions of the Vienna Convention and being bound by the directives of the SC on the Italian ambassador

It may well turn out that the victor of the elections, six weeks from now, will be Avigdor Lieberman. And that will be the beginning of a new chapter altogether.

Once And For All!

Move towards peace with the entire Palestinian people, including Fatah and Hamas—so we can really put an end to the violence,

The March Of Folly

I believe that a rejuvenated Arab world, in which moderate Islamic forces play an important role (as they do in Turkey), may form the environment for Israeli-Arab peace. If we desire peace.

The mere fact of Iran hosting the NAM summit – attended by all 120 members, a quarter represented by their heads of state, but also most of its 21 observers – contradicts the Western-inspired notion of its diplomatic isolation.

'I Hope The Opposition Will See Sense'

With a moderate stance, President Mohamed Morsi could signal a more active Egypt in foreign affairs