'This Has Very Little To Do With Religion'

'Afghan Taliban feel that the main target should be NATO and the West, and not the Pakistani state, on which, after all, they have relied for a long time' 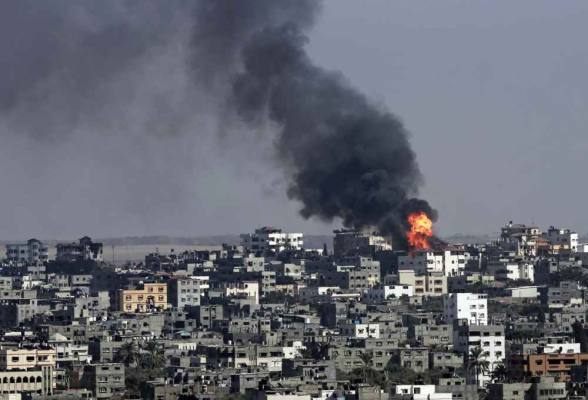 Blinded By Israel, Visionless In Gaza

A unanimous Senate vote is rare, so what explains being more loyal to Israel than quite a few critical Jewish Israelis in that country itself?

Can Obama administration truly break from past policy or will it just create a military-plus add-on to it? Only a total break from the catastrophe that George W. Bush, Dick Cheney, and Donald Rumsfeld created in Afghanistan will offer pathways to a v

The American War Moves To Pakistan

Its effects could be catastrophic, creating a severe crisis within the army and in Pakistan at large. It will only create a state of permanent mayhem in the region, resulting in ever more violence and terror, as well as heightened support for jihadi

It's a tragedy for a country on a road to more disasters. Torrents and foaming cataracts lie ahead. And it is a personal tragedy. The house of Bhutto has lost another member. Father, two sons and now a daughter have all died unnatural deaths.

'In Solidarity With Its [CPM's] Left Critics'

Our statement did not lend support to the CPM's actions in Nandigram or its recent economic policies in West Bengal, nor was that our intention. On the contrary, we asserted ... that we found them tragically wrong.

To Our Friends in Bengal

This statement was originally published in the Hindu on November 22, but since then one of the signatories, Susan George, has dissociated herself from it.

Time For A Regime Change

Blair's ideological zealotry has helped destroy Iraq, revive the Taliban in Afghanistan, increase the threat of terror in Britain and introduce repressive laws that were not enforced even in the second world war.

The Muslim world with two of its countries—Iraq and Afghanistan— directly occupied by Western troops does not need to be reminded of the language of the Crusades. Violence was and is not the prerogative of any single religion as the continuing Israel

This Is No Rah-Rah Revolt

This is not one of those carefully orchestrated "orange" affairs with its mass-produced placards, rah-rah gals and giant PR firms. It has nothing to do with religion. It is the culmination of decades of social, cultural and economic oppression. Somet

It is not that some of them are not doing good work in Pakistan, but the overall effect of this has been to atomize the tiny layer of left and liberal intellectuals, struggling to keep the money coming; with petty rivalries assuming exaggerated propo

This Is The Real Outrage

It's strange that the Danish imams and their friends abroad ignore the real tragedy and instead ensure that the cartoons are now being reprinted everywhere.

It is twenty-five years ago that John Lennon was murdered. This 1971 interview that is said to have inspired him to write the anthem by the above name first appeared in The Red Mole.

Out with the old, in with the new. The Iraqi elections were designed not to preserve the unity of Iraq but to re-establish the unity of the west

Sooner than anyone could have predicted the occupation has become untenable. Regime changes in Washington and London would be small punishment compared to what is being inflicted on Iraq.

A Patriarch Of Arab Literature

Abdelrehman Munif (1933-2004) was a storyteller without compare, who enriched the culture of the Arab world as a whole. He was a strong and independent-minded intellectual who refused to bend the knee before Prince or Colonel.

Those in the US and elsewhere who argued that the resistance was led by Saddam and the remnants of the old regime, will now get a big shock.