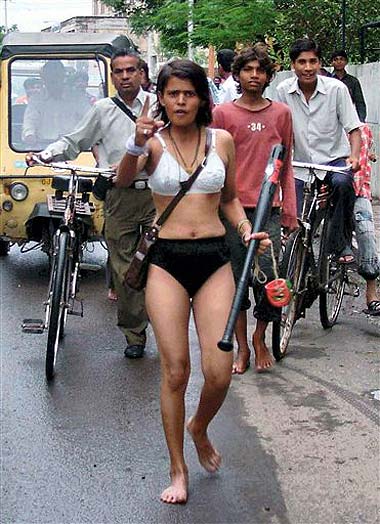 Pooja Chauhan, in her undergarments and carrying a baseball bat and bangles, gestures as she marches to the Police Commissioner's office in Rajkot, Gujarat, in this Wednesday, July 4 photo. Rajkot went into convulsions yesterday when alleged mental and physical abuse by her husband's family drove the 22-year-old woman to strip to her underwear and walk through the city in protest. Pooja said she had taken to this unique protest after being constantly harassed for not bringing dowry and for bearing a girl-child. She has also alleged it was the insensitivity of the police that drove her to take the step and had threatend to scale up her protest and march nude to the Police Commissioner's office if she did not get justice. After her protest march, the police finally registered an FIR and arrested her husband Pratapsinh Chauhan, parents-in-law and neighbours Veji Bharwad and Vinu Dalit for allegedly torturing her for dowry.