Lalu Prasad and Nitish Kumar have mastered the art of successfully running multi-party governments, with or without conforming to the ideals of coalition dharma

CPI-ML, the party that had once accused RJD MP Mohd Shahabuddin of masterminding the killing of former JNU stu­d­ents’ union president Chandrashekhar, is now an ally of Lalu Prasad Yadav. Across the pol­itical aisle, Nitish Kumar appears to have for­gotten all about his four-year separation from BJP over the projection of Narendra Modi as the NDA’s prime ministerial candidate.

Politics makes strange bedfellows, especially in the coalition era, when friends turn foes and vice-versa at the altar of electoral arithmetic. Who cou­­ld have thought that SP and BSP, once ‘sworn enemies’, would join forces ahead of the 2019 Lok Sabha elections in Uttar Pradesh, only to go their own ways in the ensuing assembly polls? And who could have expected Nitish Kumar to return to the BJP camp, less than two years after he led the Mahagath­ban­dhan to victory in the 2015 assembly polls in Bihar, vowing never to restore ties with his old ally?

ALSO READ: State Of The Union: How Centre-State Ties Have Fractured Over Time

Elections in India are akin to a T20 game, where winners are usually not known until the last ball is bowled. But in the era of multi-colour alliances, few leaders have mastered the art of successfully running multi-party coalition governments, with or without conforming to the ideals of coalition dharma, as the Bihar stalwarts—Lalu Prasad Yad­av and Nitish Kumar—have done.

Ahead of the 2009 general elections, Lalu Prasad Yadav had not-so-politely tur­ned down the request of Congress, his long-time ally, to spare even four out of the 40 parlia­m­ent­ary seats in Bihar, despite the fact that the gra­nd old party had four sitting Lok Sabha MPs from the state. “I can spare only three for you. Take it or leave it,” Lalu is learned to have told Bih­ar’s sulking Congressmen, forcing AICC president Sonia Gandhi to stomp out of the coalition in a huff.

Who could have expected Nitish Kumar to return to the BJP camp, less than two years after he led the MGB to victory in the 2015 assembly polls in Bihar?

In the same election, Nitish Kum­ar forced BJP to give up its claim to the Kishan­g­anj seat in favour of JDU. Until then, JDU and BJP had been contesting 24 and 16 seats in Bihar under a 60:40 formula, but Nitish demanded and got an additi­onal seat at the BJP’s exp­ense, on the pre­text that his party had better cha­nces in the Muslim-majo­rity constituency. That his party lost the polls from there is an altogether different matter.

Over the years, Nitish and Lalu have been heading regional outfits that have little or no presence outside their own state. Yet, they have always man­­aged to lord it over their ambitious ‘national’ allies such as BJP and Congress—either through diplomacy or, if needed, by arm-twisting. In the past 32 years, the two strongmen have tak­en turns to rule the eastern state with brute pow­er, by reducing their allies to playing second fiddle.

Nitish has been quite adept at it, with his vast experience of being part of different coalitions during the Atal-Advani era at the Cen­tre. Though his stock plummeted sharply after last year’s Bihar elections, which saw BJP emerging as the big brother for the first time in the history of their coalition, he continues to fend off BJP’s pre­s­sure tactics by keeping his ally guessing about his future moves. By raising his old demand of a special category status for Bihar recently, he has made it clear that despite his party’s reduced numbers, he won’t allow BJP to ride roughshod over him. It has occasionally fuelled speculation over the possibility of another somersault by him. Despite being numerically stronger than Nitish’s JDU in the assembly, BJP can do little about it. For, the possibility of Nitish’s jumping the NDA ship and hopping on to Lalu’s bandwagon, as he had done in 2013, can’t be called impossible.

Despite many setbacks due to multiple fodder scam cases, Lalu has refused to give ext­ra legroom to any of his allies, be it the Congress or the Left Front.

In the last assembly polls, RJD had won the max­imum 75 seats followed by BJP with 74. JDU finished a poor third with only 43 seats in the 243-­member House, but Nitish remains CM primarily because of the fact that RJD and BJP cannot afford to join forces with each oth­er. And both parties have to retain Nitish by their side to keep their rivals away from power in Bihar. The emergence of Tejashwi Prasad Yadav as the bona fide RJD leader has not altered the situation enough to rule out an RJD-JDU reunion at this juncture.

ALSO READ: Federalism And The Idea Of Regionalism

Apart from BJP, Nitish’s alliance consists of Jitam Ram Manjhi of the Hindustani Awam Mor­cha-Secular and Mukesh Sahni of Vikashsheel Insan Party, who keep raising one issue or another against their own government, but have also failed to rob the chief minister of his sleep despite his government’s slender majority in the assembly. 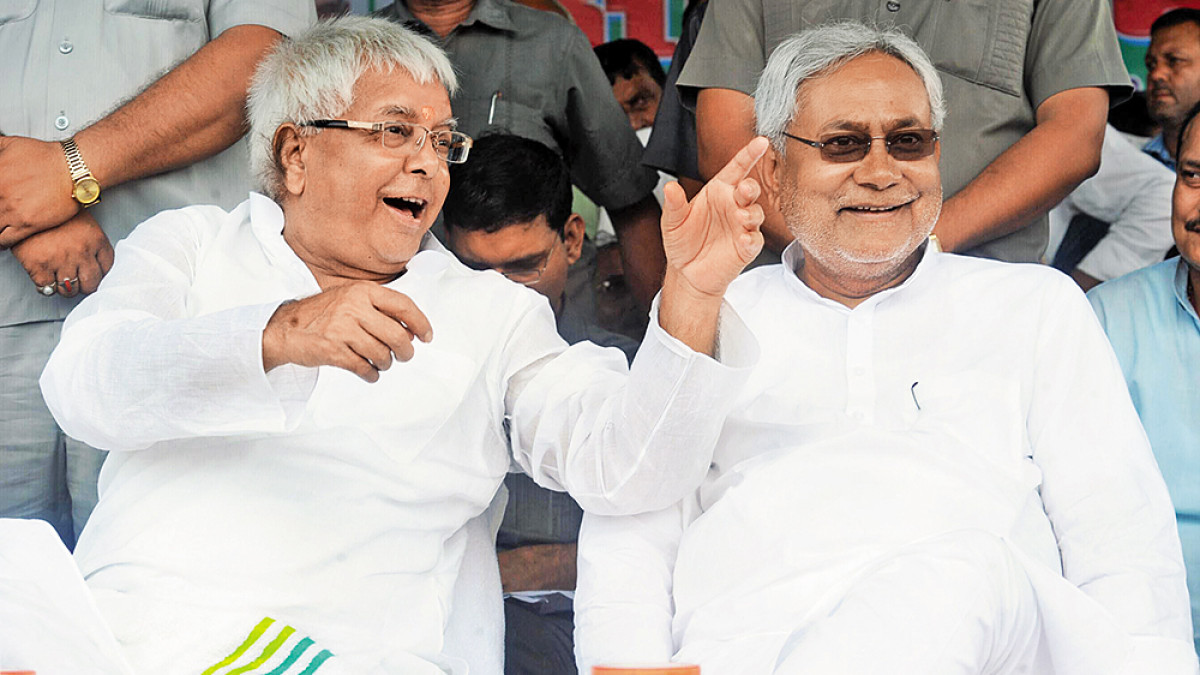 All smiles Lalu and Nitish at a joint rally in Hajipur, Bihar on August 12, 2014

Nitish, of course, has seen the fate of different non-­Congress governments headed by Deve Gow­da and Gujral at the Centre in the 1990s. Evide­n­tly, he knows that if he lets any of his allies dictate terms to him, he will be reduced to a titular head in both the government and the coalition.

ALSO READ: Punjab Haunted By The Past It Wants To Forget

Soon after coming to power in 2006, he had even offered to resign during an NDA meet when some BJP legislators questioned his style of funct­ion­i­ng. It forced his ally to retreat quickly. Nitish’s dominance in the coalition has since continued, tho­ugh BJP leaders such as state president Sanjay Jaiswal have lately become more critical of him.

Elsewhere, Lalu has continually faced setbacks due to his incarceration in multiple fodder scam cases. But he has also refused to give any ext­ra legroom to any of his allies, be it Congress or the Left Front. Congress, for one, has remained a secondary party in their alliance and, willy-nilly, has to kowtow to Lalu’s diktats. Incidentally, Lalu had come to power after ousting a Congress gove­rnment in 1990, and had even received BJP’s support to run his government in his early days. But Congress later agreed to play second fiddle to him just to keep BJP away from power.

Bihar’s previous experiments with coalition governments in 1967 and 1977 had fai­l­ed, but Nitish and Lalu pulled it off for three consecutive terms. Ironically, both owe their rise in politics to the Total Revolution spearheaded by socialist leader Jayaprakash Narayan against the erstwhile Indira Gandhi regime at the Centre. They could become regional powerhouses largely because of the continued neglect of the state by successive Congress regimes in Delhi.

In a federal structure, where all states should have moved forward together on the road to prosperity after Independence, Bihar was left to lag behind almost all other states, not by a few steps but by hundreds of miles. Even Jharkhand, which was car­ved out of it in 2000, marched ahe­ad of it on several parameters of development.

That is the primary reason why Nitish has been pressing for the special categ­ory status for Bihar, underscoring the need for incentives like a tax holiday, to enable Bihar to bridge the yawning gap with other states. As recent NITI Aayog data suggests, nothing appears to have changed in the past decade, though the Nitish government has chosen to dispute the findings. The BJP has countered his demand, but this hasn’t impacted their ties yet. Nitish knows where he should draw the line in the coalition.

(This appeared in the print edition as "The Coalition Instinct")

Right In The Centre: The New Power Structure In Dilli Durbar

Centre-State Relations: Has The Concurrent List Outlived Its Utility

Mumbai Muddle: Why Maharashtra And Delhi Are Frequently At Loggerheads

How Dravidian Politics Acts As Bulwark Against Centralism

Shifting The Goalposts: A Young Politician’s Battle To Save Goa And Its Way Of Life