Mumbai Muddle: Why Maharashtra And Delhi Are Frequently At Loggerheads

Relations between the MVA government and the BJP-led Centre have been strained for nearly two years. It has now snowballed into a public spat, spilling into areas of governance.

Cyclone Tauktae struck coastal Mah­arashtra on May 14, 2021, leaving devastation in its wake. A year ago on June 2, these same parts had been hit hard by Cyclone Nisarga, uprooting tall and sturdy trees, destroying standing crops and wrecking houses, as flood waters rushed into villages with a ven­g­e­ance. Livestock and belongings were washed away or destroyed. Overnight, both the well-off and the poor were rendered paupers.

Cyclone Tauktae had also hit neighbouring Gujarat. While both states looked to the Centre for immediate financial relief, Prime Minister Narendra Modi chose to review the destruction only in his home state, Gujarat. He conducted an aerial survey of Gujarat and Diu, leaving Mah­arashtra out of it, and then, announced a fin­ancial package of Rs 1,000 crore as immediate relief, again for Gujarat. A central team was lat­er sent to Maharashtra to study the destruct­ion, after which the PM had announced that fin­ancial relief would be disbursed.

ALSO READ: State Of The Union: How Centre-State Ties Have Fractured Over Time

The genesis of the dispute between PM Modi and Maharashtra chief minister Uddhav Thack­eray can be traced to the chaos surrounding government formation in the state after the Oct­ober 2019 assembly polls. Thackeray’s Shiv Sena had been an alliance partner of the BJP for over 25 years. The parties had even fought the 2019 Lok Sabha and assembly polls together. But, after the results of the assembly polls were declared, a tectonic shift took place in the relat­i­onship between Modi and Thackeray. It sou­red. Eventually, Thackeray became chief min­­i­ster of a post-poll alliance—the Maha Vikas Aghadi (MVA)—with Congress and NCP—both of which he had severely criticised during the campaign. In no time, there was a complete breakdown in the strained relationship bet­ween the two leaders. 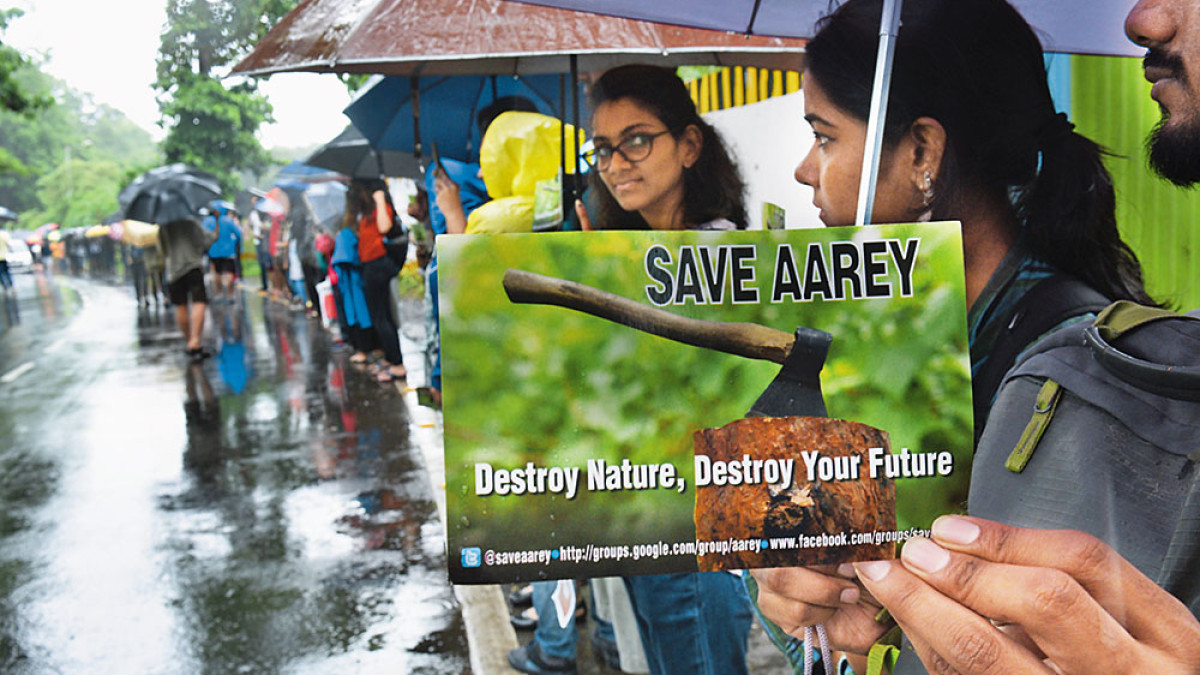 Protest to save Aarey forest

In his new avatar, Thackeray became a virulent critic of the PM. The consequent loss of trust was clearly visible during the Covid-19 pandemic, when active cases and deaths eleva­ted Maharashtra to the top. State health minister, Rajesh Tope, complained of step-motherly treatment by the Centre, citing shortages of medicines, oxygen and other aid. In April 2021, when the state’s vaccination drive was on, Tope again complained of a lower quota of vaccines allotted by the Centre, despite Maharashtra hav­ing the highest number of Covid cases in the country. He had then complained that BJP-ruled states of UP, MP, Gujarat and Haryana had received more vaccines and Covid-19 help.

Early on in the pandemic, the PM announced the first nationwide lockdown from March 24, 2020. As everything came to a grinding halt, Maharashtra, with its high population of migr­a­nts, mostly daily wagers, was hit hard. With no public transport including trains and inter-­sta­te buses, these labourers, largely from Uttar Pradesh, Bihar, Jharkhand, Karnataka and West Bengal were stuck without food or money in their pitiful rented accommodation, unable to return to their native villages. 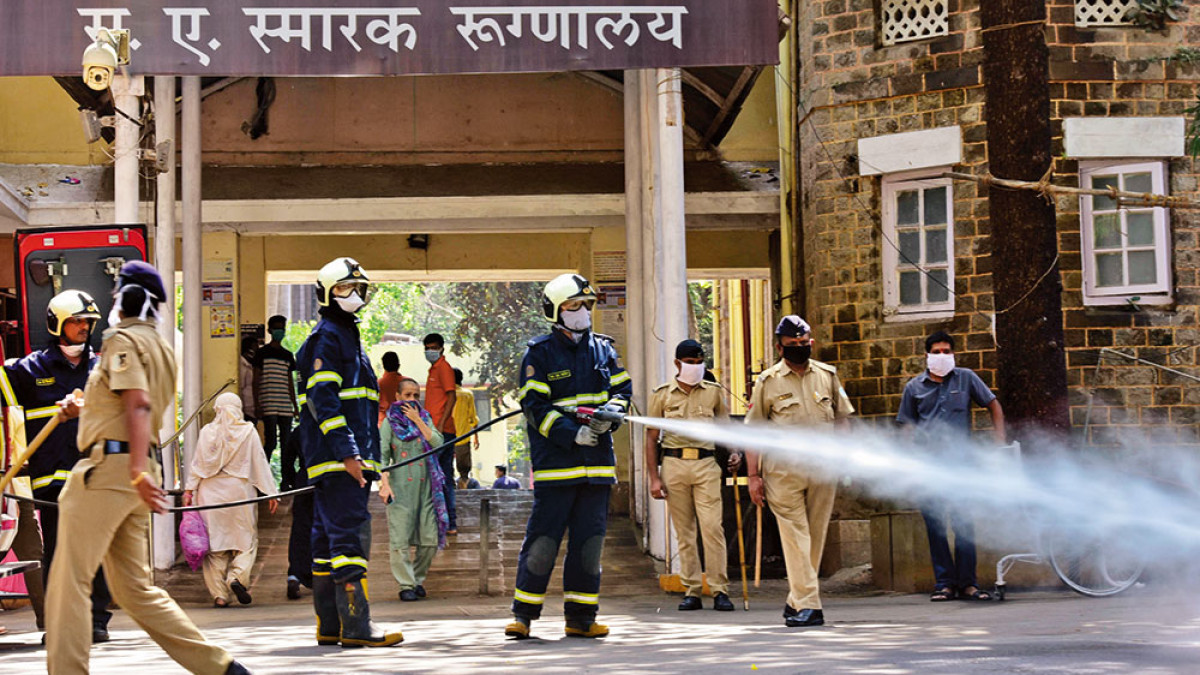 As the unplanned lockdown progressed, many of the scared and hungry migrants started out on foot to reach their villages. Many died of Cov­id and other ailments, some in accidents on the highways and rail lines. Thackeray made an imp­assioned plea to the Centre for trains on sel­ect routes to transport these migrants, but the delay cost many lives. An angry CM lashed out at the PM, saying he had never listened to Thackeray’s request for trains, adding fuel to the fire.

ALSO READ: Federalism And The Idea Of Regionalism

Yet another ongoing feud between the Centre and the Maharashtra government is the location of a car shed for Phase III of the Mumbai Metro. While the Centre is fixated on building it in Aarey Colony—a natural forest considered Mumbai’s green lungs—the state government is keen on land in Kanjurmarg. The discussions on the Metro car shed had started during the tenure of ex-BJP CM Devendra Fadnavis. The Shiv Sena was a partner in that government. Already, 2,141 trees had been felled for the project. But immediately after Thackeray took charge in October 2020, with his son Aaditya the minister of environment and forests, the Aarey Colony project was scrapped. Not to be outdone, the Centre has subsequently put a spanner in the shifting of the Metro car shed to Kanjurmarg, and the dispute continues. 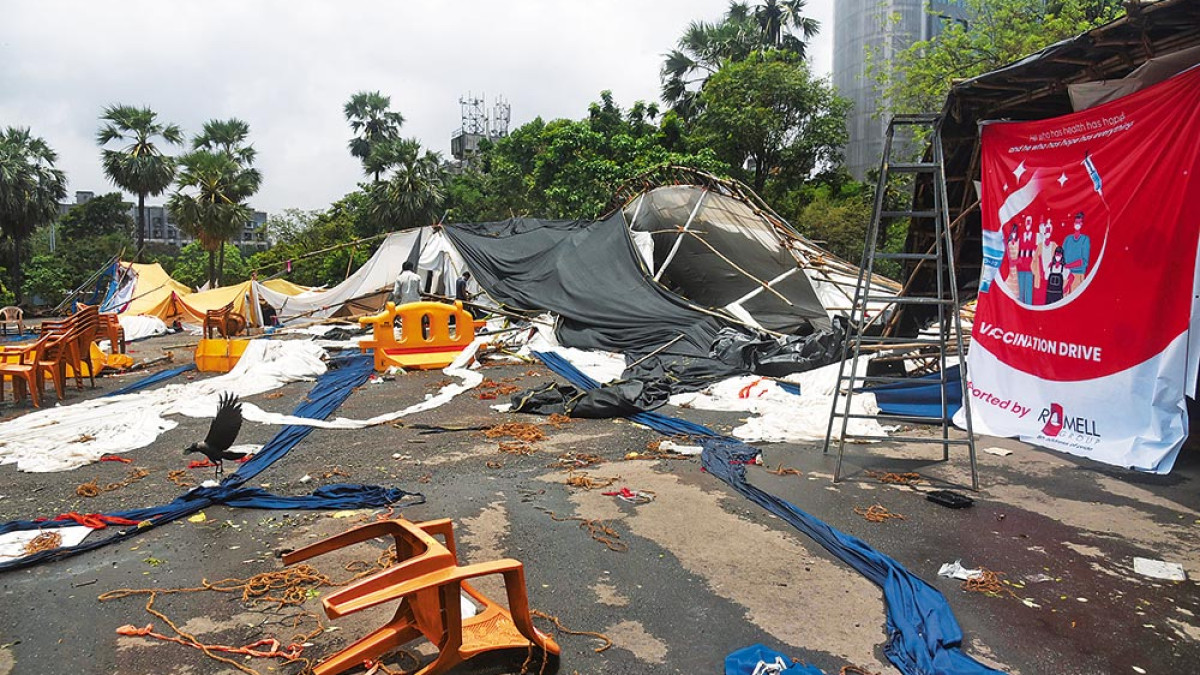 Destruction left behind by Cyclone Tauktae

In that same, action-packed month, the MVA also withdrew consent for CBI to probe corruption cases in the state, after the age­ncy opened probes into high-profile cases that took place months before October 2020. These inc­luded the Elgar Parishad probe, then being hand­led by Pune Police, which was handed over to the National Investigating Agency in July 2020, and the probe into the death of actor Sushant Singh Raj­put, which was earmarked to CBI in August 2020.

Soon, with Mumbai Crime Branch already conducting its investigation into the Rajput case, the NCB, led by then zonal director Sam­eer Wankhede, carried out a series of raids on Bollywood actors, including numerous A-list­ers. NCB claimed there were links bet­ween the late actor’s close friend Rhea Chakraborty and her brother Showik, who they accused of drug peddling, and arrested. With assembly polls in Bihar being held over the October-Nov­ember 2020 period, Rajput’s Bihari origin was played up. Expectedly, all that noise over Rajput receded after the polls.

ALSO READ: Punjab Haunted By The Past It Wants To Forget

Political analyst Parimal Maya Sudhakar of Pune’s MIT School of Government believes the clashes between the Centre and states are primarily due to personality cult politics. “The rise in tussles between the Centre and states is due to the centering of politics around one person. It is a conflict of cults—with PM Modi the pan-Indian cult for BJP, while the state CM is the regional cult. The more the regional cult grows, the more it is perceived as a threat by Modi, and vice-versa,” said Sudhakar. 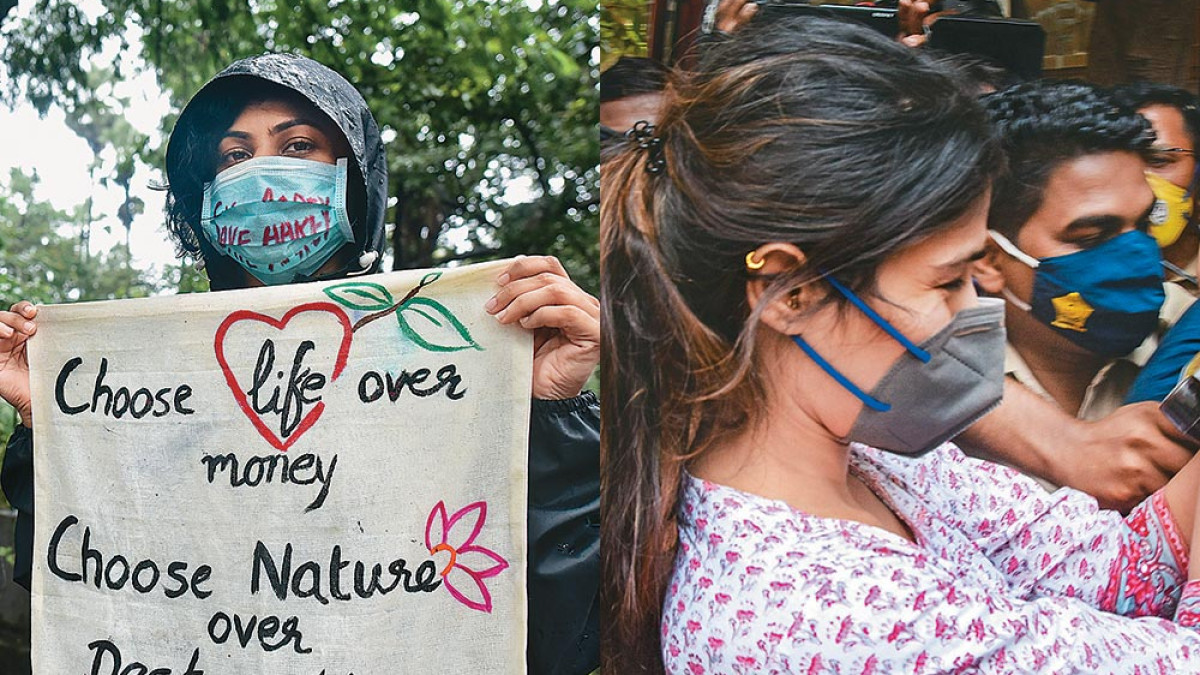 Partisan politics has led to rifts with the Centre in a number of states. Though BJP is comfortable at the national level, they have failed to win many states, especially on their own. “What they can’t control politically, they are trying to control bureaucratically, by their own interpretation of the Constitution and through governors they appoint. Using its Hindutva agenda, the BJP wants to culturally and linguistically dominate the states, which is greatly resented on ground,” said Sudhakar.

No wonder that simmering Centre-state relations have regularly been spilling over into public disputes. When the Centre enacted the three farm laws, it led to a year-long protest by farmers, after which they were repealed. Meanwhile, the states, including Maharashtra, had already refused to implement them.

Mohan Hirabai Hiralal (72), a believer in Mah­atma Gandhi and Vinoba Bhave’s thesis of people’s power, has been actively taking the local self-government movement to villages of Gad­chiroli and Chandrapur—districts with heightened Maoist activities. According to Hiralal, a harmonious Centre-state relationship is the key to constructive development. “The strain in the relationship between the Centre and states has increased. There are different political parties ruling the state and the Centre, so there will be friction, as there’s an underlying scramble for more political and financial power,” said Hiralal.

“In this scenario, central investigating agenc­ies have been weaponised like never before,” says Shiv Sena spokesman and Rajya Sab­ha MP Sanjay Raut. Critics in Maharashtra have been silenced by Enforce­m­ent Directorate (ED), Inc­ome Tax (IT), Cen­tral Bureau of Inve­stigation (CBI), Narcotics Con­trol Bureau (NCB) and National Invest­ig­ating Agency (NIA), which con­duct raids and launch probes against them with alacrity. A case in point is Raut himself. A virulent critic of Modi, Shah and the NDA gove­rnment at the Centre, he has been boxed into a corner after raids by ED, leading to arrests of his friends and family.

The ED has now started an investigation against his wife, Varsha, and her business partner Madhuri Raut, in the PMC bank fraud case, pertaining to a transfer of Rs 55 lakh in intere­st-free loan to her in 2010 and 2011 by Raut, whose husband Pravin Raut had already been arrested for money laundering by ED in the HDIL case. Then the ED raided the premises of businessman Sujit Patkar, business partner of 16 years with Sanjay Raut’s daughters Purvashi and Vidhita, in their wine company Magpie DFS Private Limited, in connection with an alleged land redevelopment scam worth Rs 1,034 crore.

Another Shiv Sena MLA caught in the ED crosshairs is Pratap Sarnaik, who has been a die-hard critic of Republic TV editor-in-chief Arnab Goswami. ED has raided Sarnaik and is also probing an alleged money-laundering angle.

Taking potshots at the Centre for the ED conducting raids on Shiv Sena, Congress and NCP leaders, their close confidantes, relatives and friends, Thackeray, not a person to be cowed down easily, alleged that the PMO will not rev­eal the manner in which PM Cares funds has been utilised. “The funds cannot be investiga­ted. If people question them, ED will be let loose on them,” Thackeray said recently.

ALSO READ: Right In The Centre: The New Power Structure In Dilli Durbar

One of the major flashpoints between the Cen­tre and the MVA government has been the office of the governor. The MVA alleges that he acts on behalf of the Centre while being the constitutional head of the state. Their ire is with Governor Bha­­gat Singh Koshyari circumventing protocol to meet state bureaucrats without intimating the state government. “The Governor has been interfering in the workings of the government for two years. He is not allo­wing this government to function,” says a senior MVA minister to Outlook.

A year-and-a-half ago, Uddhav Thackeray and his Cabinet had recommended a list of 12 members for the Maharashtra Legislative Council, to be nominated by the governor. Till now, the gov­­ernor has refused to clear the nominees, leaving 12 vacant seats in the Legislative Cou­n­cil. A petition has now been filed in Bombay high court, seeking directions to the governor to take action on the issue.

ALSO READ: How Dravidian Politics Acts As Bulwark Against Centralism

The Maharashtra Cabinet, too, has now taken on Koshyari, clearing amendments to the Mah­a­rashtra Public University Act (2016) that will impact the shortlisting of vice-chancellors at public universities in the state. According to the amendment, the state will select nominees and send the list to the Governor for approval. Sour­ces said this move was intended to circumscribe the power of the Governor—who is the chancellor of all these universities.

Clearly, no side is in any mood to blink first.

(This appeared in the print edition as "Mumbai Muddle")

Shifting The Goalposts: A Young Politician’s Battle To Save Goa And Its Way Of Life