Since joining Barcelona from Arsenal in January, Pierre-Emerick Aubameyang has scored five goals in three games for the Catalan giants.

Things are going Barcelona’s way again and, thanks to Pierre-Emerick Aubameyang, scoring is no longer a problem for the Catalan club. Aubameyang scored his fifth goal in three matches as Barcelona kept momentum with a reassuring 4-0 win over Athletic Bilbao in La Liga 2021-22 on Sunday. (More Football News)

Ousmane Dembélé, Luuk de Jong and Memphis Depay also scored for Barcelona, who was coming off a big win against Napoli in the Europa League 2021-22. Xavi Hernández’s team has won three in a row in all competitions — scoring four goals each time — and is back in fourth place in the Spanish league in the final Champions League spot.

“We’ve been doing a good job,” Xavi said. “The sensations are getting better and better. The team has been practicing very well and now the results are showing.” The win at Camp Nou moved Barcelona within a point of third-place Real Betis with a game in hand.

Barcelona’s gap to leader Real Madrid is 15 points. Aubameyang had scored in the 4-2 win against Napoli on Thursday and was coming off a hat-trick in the 4-1 win against Valencia in the league last week. The 32-year-old striker was signed from Arsenal in the last minute of the transfer window last month.

He scored from close range in the first half against Athletic and Dembélé added to the lead in the second for his first goal since being reinstated to the squad after refusing to leave in the transfer window.

De Jong sealed the victory with a header in the 90th and Depay closed the scoring in stoppage time for his first goal since November. This was his first appearance after being sidelined for almost a month and a half because of an injury.

The win kept Barcelona unbeaten in seven matches in all competitions, since a loss to Athletic in the round of 16 of the Copa del Rey in January. The Catalan club has outscored its opponents 12-3 in its last three games.

Athletic, sitting in eighth place, was coming off a 4-0 rout of Basque Country rival Real Sociedad in the league. Seventh-place Sociedad rebounded from the loss to Athletic with a 1-0 win over Osasuna.

The message “No to war” is being shown on the broadcast of all Spanish league matches. 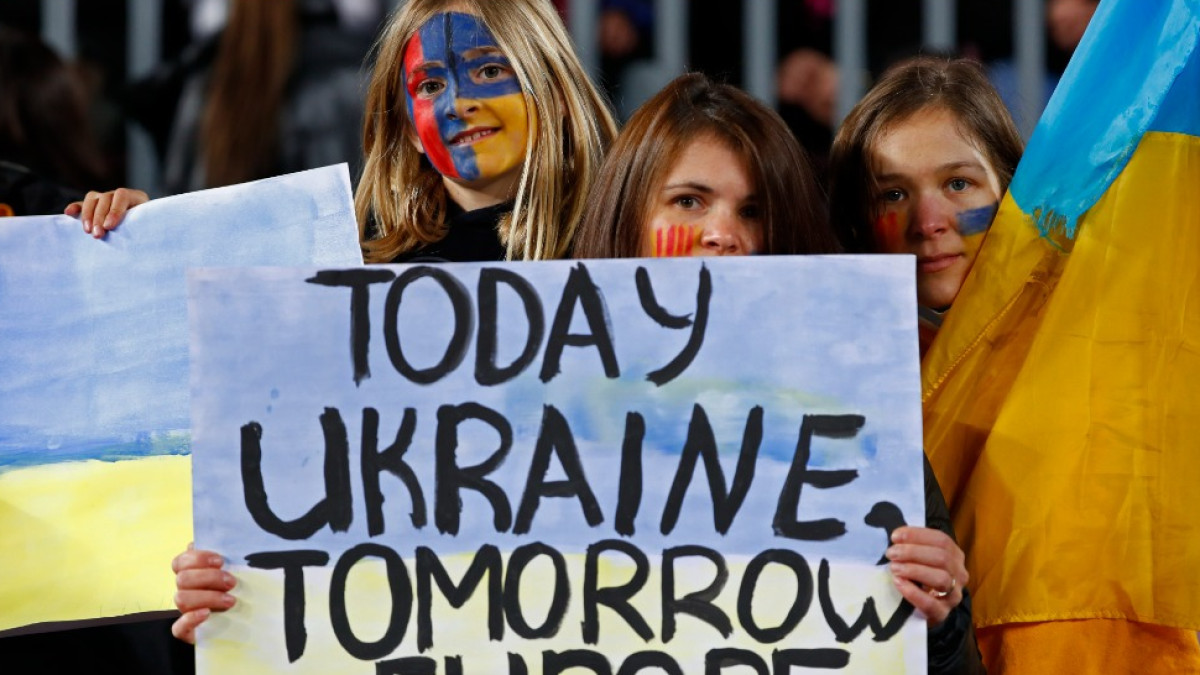 Two Barcelona supporters hold a sign in support of Ukraine during their La Liga 2021-22 match against Athletic Bilbao. (Photo: AP)

Sevilla beat Real Betis 2-1 in the Seville derby to stay within range of league leader Madrid.

It was the rivals’ first meeting since the previous derby had to be suspended because a Sevilla player was hit by a piece of PVC thrown by a Betis fan in the round of 16 of the Copa del Rey last month. Sevilla eventually lost when the match resumed a day later without fans.

The result kept Sevilla six points behind Madrid, which won 1-0 at Rayo Vallecano on Saturday. The win also allowed Sevilla to open up an eight-point gap to third-place Betis. “We are still alive,” Sevilla coach Julen Lopetegui said. “We deserved the three points today and now we have to prepare to try to win the next one as well.”

Sevilla have lost only once in its last eight matches in all competitions — to Dinamo Zagreb on Thursday in the Europa League, although it still advanced to the next round with the result. Manuel Pellegrini’s Betis, which also advanced in the Europa League on Thursday, had been unbeaten in five consecutive matches, with four wins.

With four goals from four shots, Yeremy Pino became the first Villarreal player to score four times in a league game. Pino scored a hat-trick before halftime and added another goal in the second half of Villarreal’s 5-1 rout of Espanyol at home.

The 19-year-old Spain forward had never scored more than a goal in his career. He is the third-youngest four-goal scorer in the history of the Spanish league. It was the eighth win for Villarreal in its last 11 league games, with its only loss at Elche in January.

Unai Emery’s team was coming off a 1-1 draw at home against Juventus in the first leg of the round of 16 of the Champions League. The win moved Villarreal to sixth place, three points behind fifth-place Atlético Madrid, which won 2-0 at Celta Vigo on Saturday.

Espanyol’s winless streak reached eight matches in all competitions, with five losses and three draws. It stayed in 14th place.