Nearly 1,000 people have died and around 60,000 homes have been destroyed across Pakistan in floods since mid-June, according to reports.

Around 200 Army personnel and three teams of the NDRF from Bhopal and Gujarat's Vadodara Surat are working to contain the leak. Close to 1 million houses have been totally or partially damaged because of floods, leaving millions of people homeless, according to Pakistani government.

Indian Women See Moon Through Sieve, Those In US, China Live In World Of Science: Rajasthan Minister

Women in China and the US are living in the world of science, but it is unfortunate that even today, women here on Karwa Chauth see through a sieve. 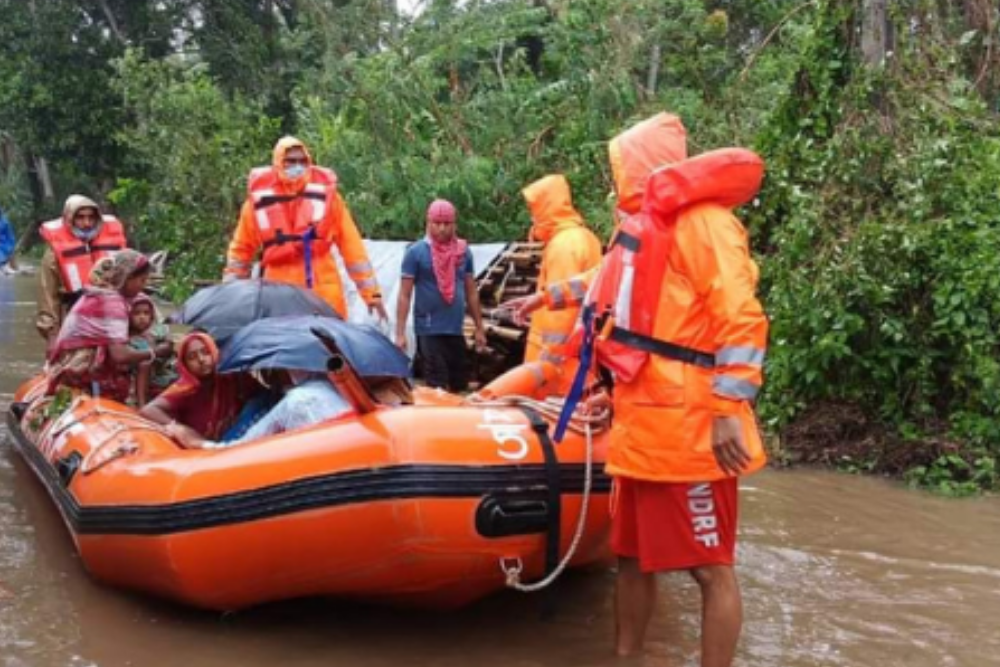 The drive would be conducted coordinating the Revenue and the Disaster Management Departments under the aegis of the local self government institutions in the state, he said. Through the drive, the impact of the natural... The top few floors of one of the two towers crashed into a boundary wall of a nearby building, barely 12 metres from residences, as per a report. Explained: How Unplanned Development And Disregard To Natural Water Bodies Cause Urban Flooding

Experts say flooding in urban and peri-urban areas are happening due to unplanned waste dumping and continuous disregard for natural recharge structures like ponds, wetlands, and tanks.

This was the second such incident in Dhrangadhra tehsil of Surendranagar district after a two-year-old boy was rescued in June.

Lahaul-Spiti district emergency operations centre (DEOC) informed that the flash flood occurred at Tindi on State Highway 26 in Keylong sub division due to...

All Families In Flood-Ravaged Yanam Will Get Cash Relief: Tamilisai

Addressing reporters in Yanam, an enclave in Andhra Pradesh belonging to Puducherry, the Lt Governor said that money and distribution of rice would be part of...

Damning The Himalayas: The Role Of Himalayan Dams In Climate Crisis

Climate scientists have failed to adequately acknowledge risks associated with large-scale hydropower development in the Himalayas.

A dozen deaths have been reported in 72 hours. Next 48 hours are predicted to bring more rains and landslides in the hill states, say weather experts.

Authorities are running 413 relief camps and distribution centres in 20 districts, where 2,78,060 people have taken shelter.

Maharashtra Chief Minister Eknath Shinde said that coordination among various agencies was necessary in the time of disaster and they must ensure there is no...

Assam Flood: The toll due to floods and landslides this year increased to 159 with eight more people dying in six districts – Nagaon, Lakhimpur, Barpeta,...

Manoj Sinha expressed satisfaction over the arrangements put in place by the Shri Amarnathji Shrine Board (SASB) and other departments for a smooth and...

Odisha CM Asks Officials To Be Ready For All Possible Disasters

Natural disasters like floods, cyclones, and droughts occur in the June-October period every year, and therefore the state administration must strengthen its...

The sensors have been installed at 10 specific locations where flooding occurs frequently, he said. He claimed that this new system has, perhaps, been...

A missing Israeli trekker has been reported in Himachal Pradesh.