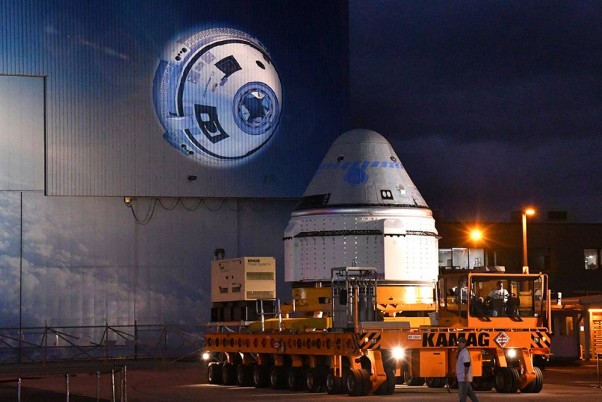 Boeing's Starliner spacecraft is rolled past a mural of itself on the side of the building at the Kennedy Space Center in Cape Canaveral, Florida, before dawn. The spaceship is scheduled to fly in December. 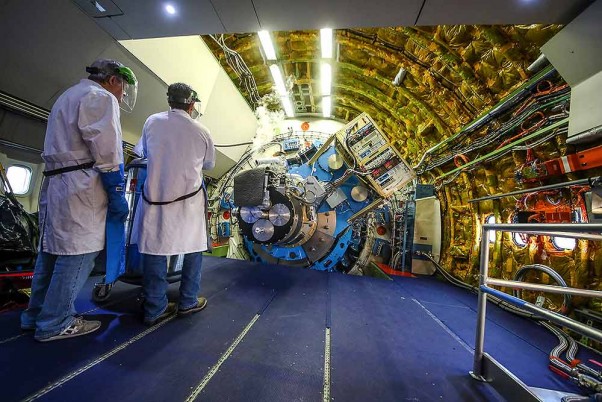 NASA researchers work inside the Boeing 747SP air carft 'SOFIA' (Stratospheric Observatory for Infrared Astronomy) at Stuttgart Airport. Sofia aircraft, which is a joint project of NASA and the German Aerospace Center (DLR), is the largest flying observatory in the world designed to observe the infrared universe and to provide data that can't be picked up by any other telescope on ground or in space. 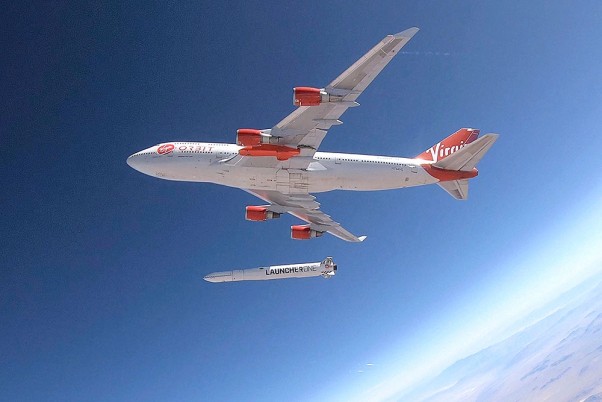 In this photo provided by Virgin Orbit, a rocket is dropped from a Boeing 747 airplane flying above Edwards Air Force Base in California. The "drop test," which did not involve firing the rocket motor, was part of a test of Virgin Orbit's air-launched satellite booster, and is considered to be a key step toward space missions. 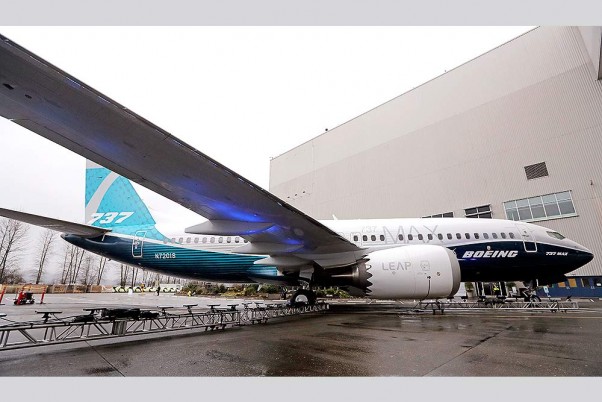 A Boeing 737 MAX 7, the newest version of Boeing's fastest-selling airplane, is displayed during a debut of the new jet in Renton, Wash. The company says that the airplane improves on the design of its predecessor, the 737-700, with more capability, range and seats. Following upcoming flight tests, it is expected to be delivered to airline customers beginning in 2019. 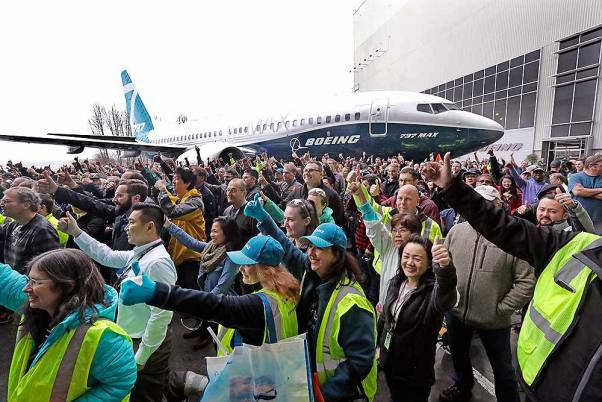 Boeing workers pose in front of a Boeing 737 MAX 7, the newest version of Boeing's fastest-selling airplane, for a group photo during a debut for employees and media of the new jet in Renton, Washington. The company says that the airplane improves on the design of its predecessor, the 737-700, with more capability, range and seats. Following upcoming flight tests, it is expected to be delivered to airline customers beginning in 2019. 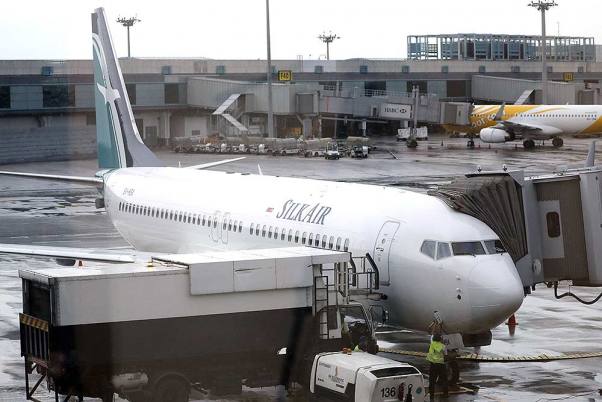 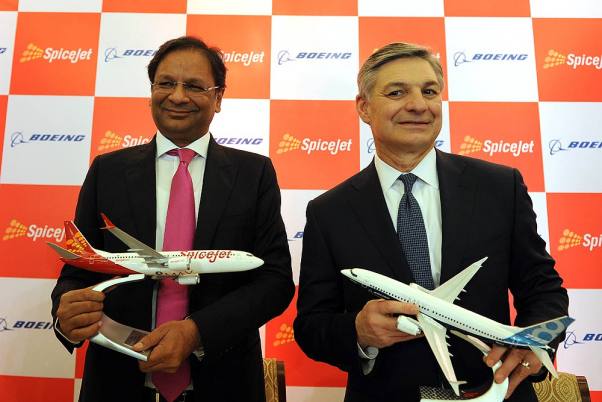 SpiceJet chairman Ajay Singh with Raymond L Conner, Vice Chairman of Boeing Company at a press conference to annouce a deal for purchase of 205 airplanes, in New Delhi. 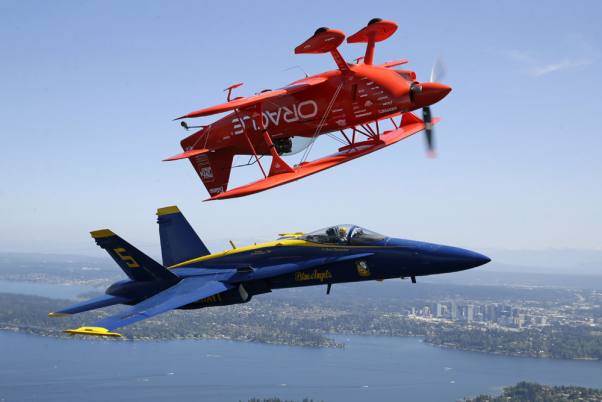 Aerobatic pilot Sean D. Tucker, top, flies inverted in his Team Oracle Challenger III biplane while in formation with U.S. Navy Lt. Ryan Chamberlain, the lead solo pilot for the Blue Angels, in a Boeing F/A-18 Hornet, near Seattle. Tucker, the Blue Angels, and other aerobatic acts are in town to preform in the annual Seafair Air Show, which will take place Aug. 5-7 over Lake Washington in Seattle. 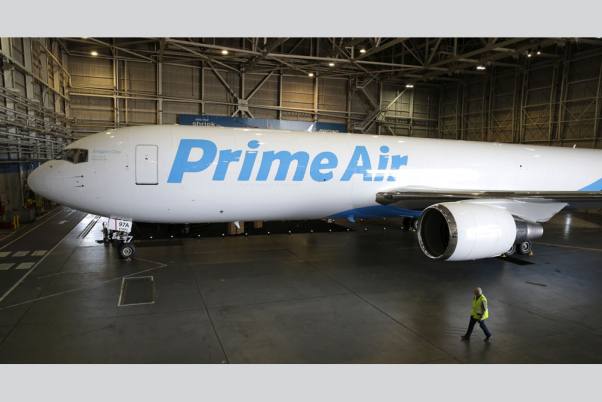 A worker walks past a Boeing 767 with an Amazon.com "Prime Air" livery on display, in a Boeing hangar in Seattle. Amazon unveiled its first branded cargo plane Thursday, one of 40 jetliners that will make up Amazon's own air transportation network of 40 Boeing jets leased from Atlas Air Worldwide Holdings and Air Transport Services Group Inc., which will operate the air cargo network. 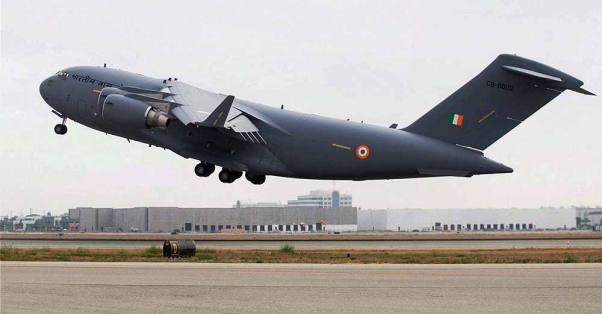 The second C-17 aircraft flying out after it was delivered to Indian Air Force by Boeing at Long Beach, California. 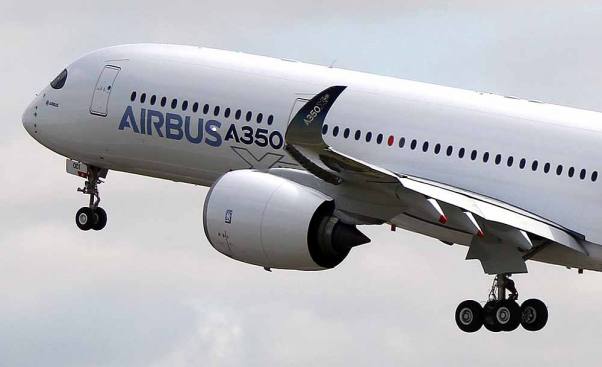 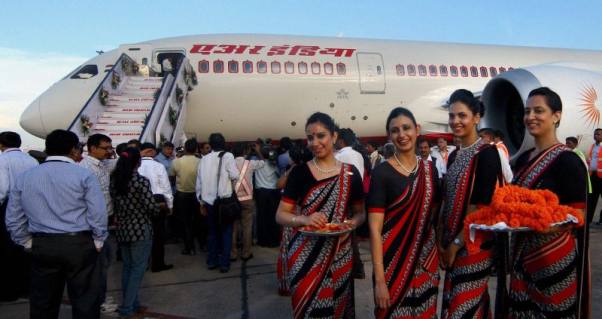 Air India's Dreamliner after it touched down at the IGI Airport in New Delhi. 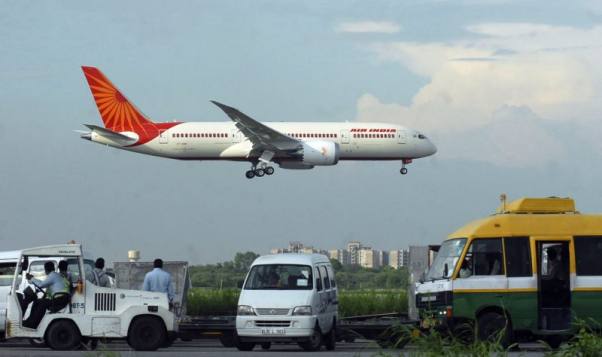 The Boeing 787 Dreamliner aircraft prepares to land at the Indira Gandhi International Airport in New Delhi. Air India has taken delivery of its first Boeing 787 from the company. It is the fifth airline worldwide to take delivery of a 787 and has 26 more on order.

A Boeing 787 Dreamliner passenger plane receives a water canon salute upon arrival at the Indira Gandhi International Airport in New Delhi. Air India has taken delivery of its first Boeing 787 from the company. It is the fifth airline worldwide to take delivery of a 787 and has 26 more on order. 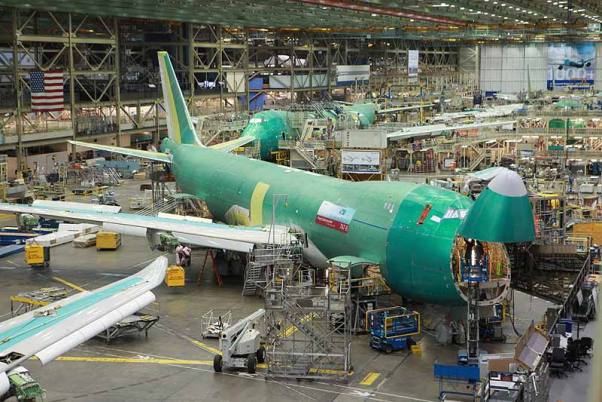 In this June 13, 2012 photo, workers on Boeing's 747-8 assembly line work inside the nose cone of a plane, in Everett, Washington. A spokesperson for Boeing said the company will be showcasing a full range of innovative new products, systems and services at The Farnborough International Airshow 2012. The show will take place in Farnborough, U.K., starting on July 9, 2012. 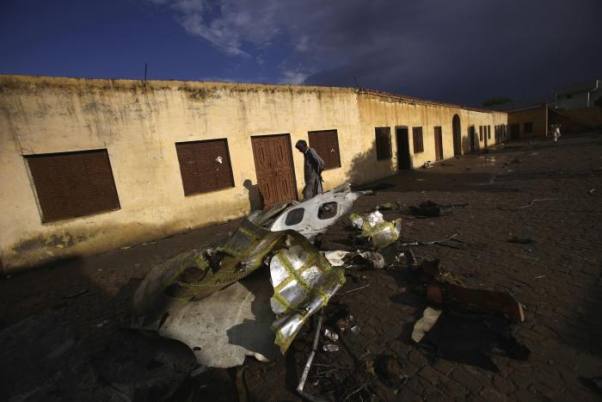 A man walks by the wreckage of a Bhoja Air Boeing 737 passenger plane that crashed, killing all 127 people on board, on the outskirts of Islamabad, Pakistan. Pakistan barred the head of the airline whose jet crashed near the capital from leaving the country, vowing to investigate the tragedy that revived fears about the safety of aviation in the country saddled by massive economic problems. 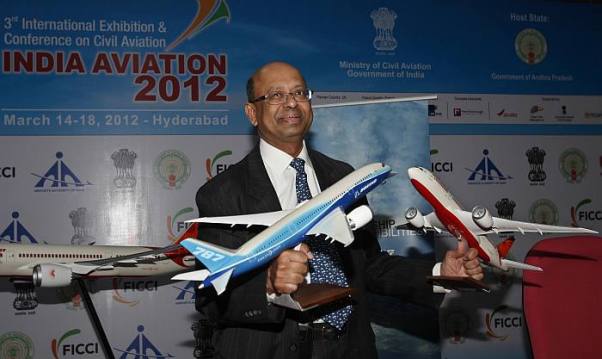 Boeing India President Dinesh A. Keskar holds replicas of aircrafts during a press conference on the opening day of the India Aviation show 2012 in Hyderabad. The third international exhibition and conference on civil Aviation, a five day event, is scheduled to run from March 14-18, where some 250 companies will showcase the latest global aerospace technology at the event. 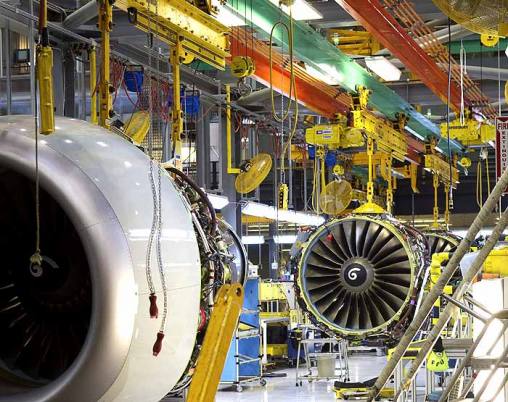 Boeing 737 engines stand at the company's factory in Renton, Washington. Boeing celebrated the increased production rate of 737 line to 35 planes per month. 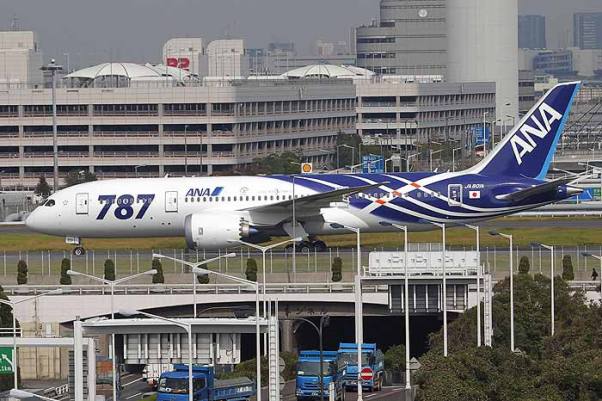 The first Boeing 787 plane delivered to a Japanese commercial customer taxis after its landing at Tokyo’s international airport at Haneda, following a flight from Everett, Wash. All Nippon Airways is the first customer to take delivery of the 787. 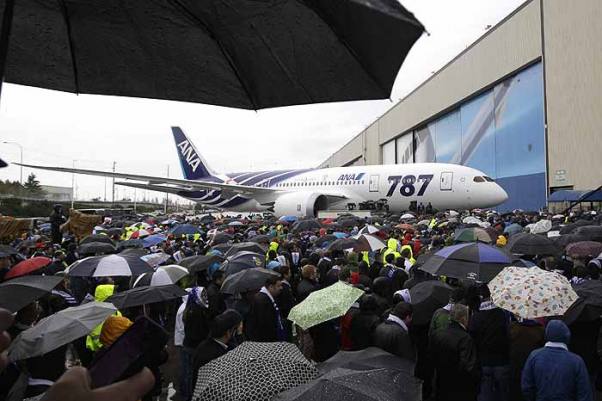 Attendees under umbrellas view a Boeing 787 airplane during a delivery celebration, in Everett, Washington. 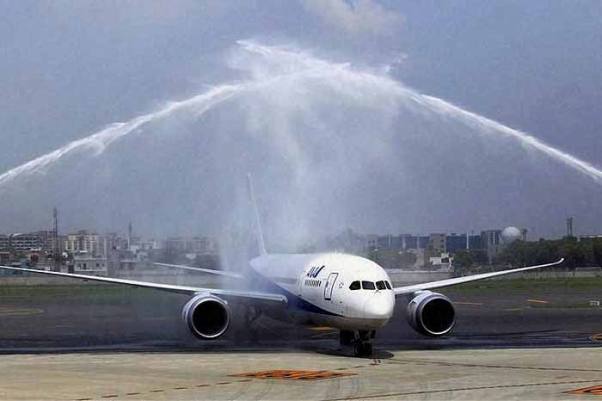 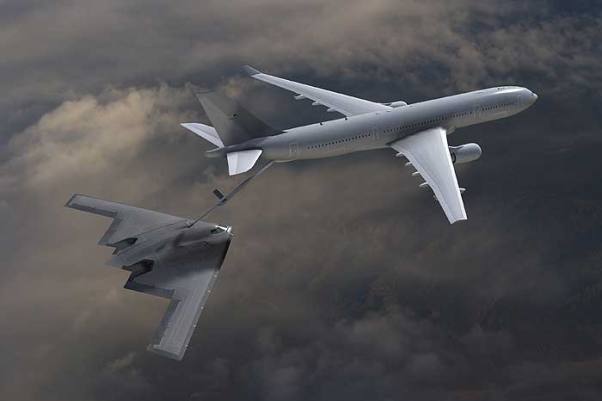 In this artist's depiction provided by Northrop Grumman Corporation, a KC-45A refuels a B-2 stealth bomber. Rival planemakers Boeing and the European defense contractor EADS submitted bids this week, Boeing on for the chance to build the new refueling plane to replace the Air Force's geriatric KC-135s. 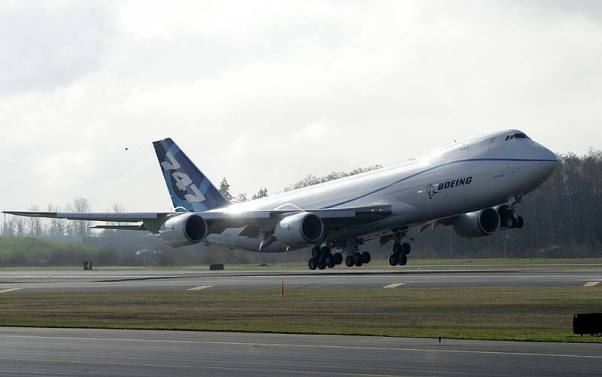 The Boeing 747-8 Freighter makes its first flight in Everett, Wash

Boeing employees cheer as a 787 Dreamliner takes off from the runway at Paine Field in Everett, Wash.