Hijab Row: How Artists Are Celebrating Women As Political Agents

The ‘Haq’ campaign by the Fearless Collective founded by artist Shilo Shiv Suleman is extending solidarity to all Muslim women fighting for their right to choice amid the ongoing hijab controversy.

More from Trisha Mukherjee
View All

Wrapped in an iridescent red shawl, an elderly woman is looking down, engrossed in reading a book. Over her eyes is a pair of red spectacles and on her head is a black headscarf, a hijab.

The seemingly ordinary portrait celebrates the extraordinary life of Sumana Bano (52), a physics lecturer. She was the first woman in her family to be educated, one of the few women in her university to study physics. She fought against all odds — took up two jobs to run her household after her father passed away, she took tuitions and embroidered clothes to make money, to achieve what and who she wanted to be.

Painted by artist Shilo Shiv Suleman, the artwork is part of a new campaign “Haq” by the Fearless Collective (founded by Suleman) that is extending solidarity to all Muslim women fighting for their right to choice amid the ongoing hijab row in the country.

The Karnataka government earlier this month introduced a ban on hijab in colleges across the state triggering outrage over what is being termed imposition of majoritarian values on the minorities, forcing young girls and women to choose between their right to education and their right to faith and choose what they wear.

As part of the Haq campaign, Suleman and her team make portraits of ordinary Muslim women, who have overcome numerous obstacles, asserted their voices at difficult crossroads in their lives to become who they are. The campaign celebrates these women as agents of their own lives.

The hijab row brings to light yet again the larger question of women’s agency over their identity and their right to exercise their choice - an issue that is being explored by several Indian artists. 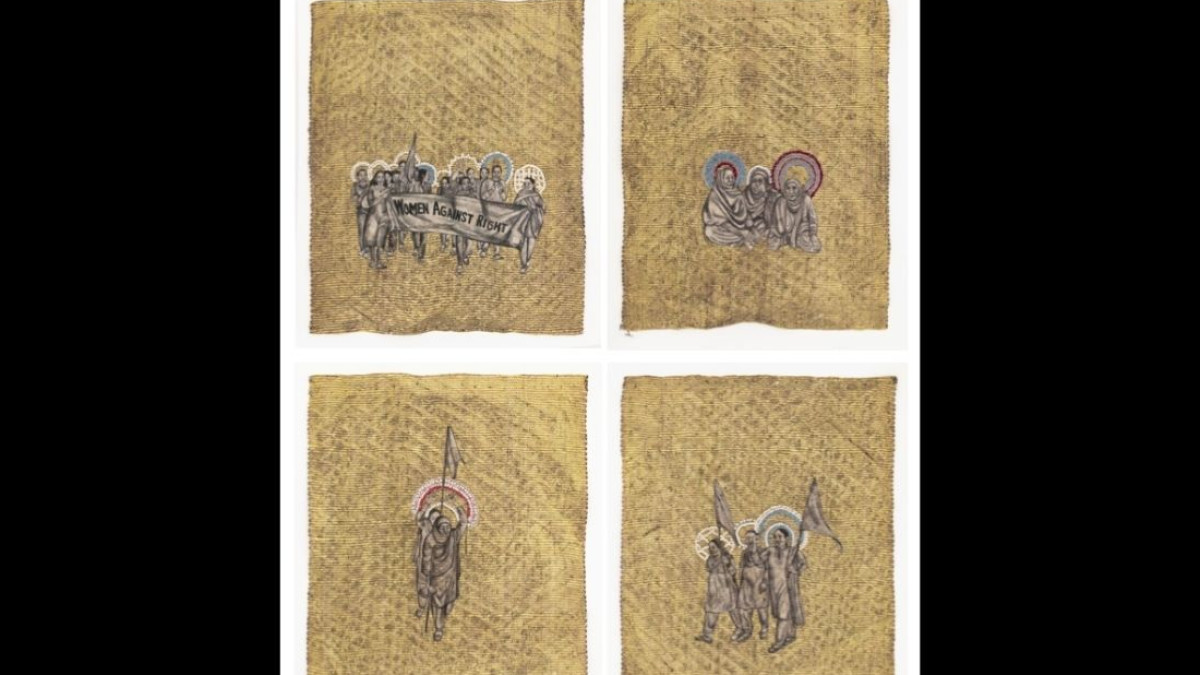 At the heart of the problem, believes artist Mayuri Chari, is the world’s misplaced perception of who or what a woman is. She is viewed either as an object of pleasure, or someone who needs to be shielded or protected.

It is this prevailing notion of the body politic that she challenges in her artwork “My Body My Freedom” (2021). In the 2021 work, she stitches across the canvas three nude female torsos, alongside which she scribbles a poem, also stitched.

Zaira Wasim Opens Up On The Hijab Controversy In Karnataka

“It is not to be treated as a holy temple, neither, it is available for others to visit as the purest place.” For Chari, a woman’s body is a “place where I live comfortably”.

An integral part of Chari’s practice is to reclaim women’s agency over their bodies.

In an exhibition in Mysuru in 2018 curated by Prabhakar Kamble, Mayuri had showcased an artwork titled, “I was not created for pleasure”. The work, a large piece of white fabric on which were stitched two naked female bodies aimed at challenging the singular perception of looking at a female body only as an object to be sexualised.

She says she wanted to alter that perception.

She recalls that while the exhibition was being put up, the gallery owner had objected to her work being included in the show, saying that the work was inappropriate for the gallery that was a “family place”. Ironically the show was titled, “Outsiders”.

Thanks to Kamble’s persistence, her work was exhibited but she had to tweak it a bit. She covered the original work, with a black cloth, with “Don’t Open, M Nude Inside” stitched across the fabric, almost instantly questioning the inexplicable need of the society to control women’s appearance.

While the issues of identity and agency have perennially been at the centre of women’s fight against patriarchy the last few years have seen women take to the streets like never before (in the recent past).

Be it the farmers' protest or the anti CAA movement in Shaheen Bagh, women have been asserting their identities, demanding their rights and reclaiming the spaces that were once denied to them, inspiring artists to explore the redefined idea of women’s agency.

Hyderabad based artist and art historian Varunika Saraf’s 12 work series “Jugni” captures this relentless strength of women to fight for their rights.

She spoofs the Russian icons of Madonna by replacing them with images of real-life women. She retains the original golden backdrop of Madonna and Child and creates the halo around these women using pearl seeds.

The artist says she found it strange that women continued to be thought of as beings who need to be “asked, told, or schooled to protest as if women don’t have agency of their own and they can’t decide”.

Recalling a court statement questioning the presence of women and children at the recent farmers' protest against the 2021 farm laws, Saraf says, “it was almost assuming that somebody has to get women to protest”. “This is what you heard in Shaheen Bagh as well.”

In all her works, she portrays women as “political agents”. 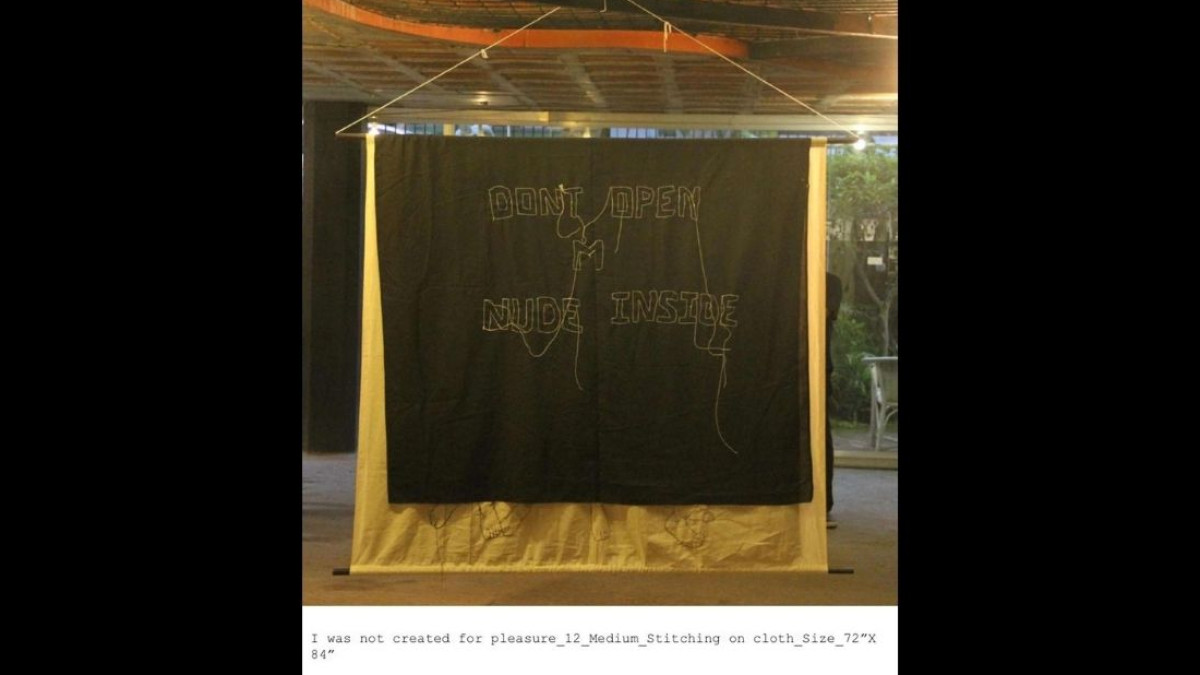 "I was not created for pleasure" by Mayuri Chari

“They know what they want and you have to respect women’s decisions,” she says.

For Mumbai-based artist Sarah Naqvi, who identifies as non-binary, queer, and a Muslim, all these identities go hand in hand, and their art is a way of documenting their own process of navigating through the intersection of these identities.

For Naqvi, the whole row around hijab in Karnataka is not really about just the headscarf.

“It's about having a constant agenda to make minorities into second-class citizens. It is systemic because it's been happening for the past three-four years.”

While Naqvi does not wear a hijab, they say wearing or not wearing the scarf is an individual choice.

“Faith is something that everyone has the right to practice but it's also an extremely personal thing and no state or institution or government has a say in the way you practice your faith,” they say.

To celebrate women’s agency over their own bodies and rights, Naqvi created the “Blanket of Solidarity” when the anti-CAA protests were underway at Shaheen Bagh. In the work, they quilt the image of a Muslim woman wearing a hijab with her fist in the air on a pink blanket.

“She's wearing a headscarf, but that's not the centre of emphasis. Her hand up in the air is an act of resistance. That's the imagery that emerges,” Naqvi says.