The Die Is Caste: Mobilisation Remains A Bankable Formula For Parties In Poll Fray

It remains to be seen whether mobilisation of castes will turn out to be the most crucial factor in the ongoing polls but the people queuing up at the polling stations want a government that will address real issues like inflation, unemployment, safety and security.

More from Harimohan Mishra
View All

Like every year, leaders of all hues, including Prime Minister Narendra Modi, sought to strike a chord with Ramdasia community gathered in Varanasi on the birth anniversary of Sant Ravidas on February 16. It was not without a reason that the date of polling in Punjab was earlier rescheduled from February 14 to February 20.

In Punjab, the Ramdasia Dalit community holds special importance because of its vote share of about 21 per cent of the total 32 per cent Dalit population. In Uttar Pradesh also, wooing the Dalit community can make a huge difference to the electoral prospects of any party.

In Punjab, where polling was held on February 20, Congress bet on Charanjit Singh Channi, its first and the only Dalit Chief Minister in the country at the moment. The Akali Dal-BSP alliance, Aam Aadmi Party and Bharatiya Janata Party also pinned their hopes on Dalit votes in the state assembly polls. But more than Punjab, it is Uttar Pradesh where it appears to have become a big challenge for every alliance in the poll fray to win over the all-important 22-23 per cent of Dalit votes.

It is not only about Dalits, though. Rampant mobilisation of all castes, be it forward, backward, poor or marginalised, is being attempted in the ongoing assembly elections, especially in Uttar Pradesh. Issues such as inflation, unemployment, economy, farm crisis and the horrors of the two waves of Coronavirus appear to have taken the back seat in the rough and tumble of electioneering.

Let alone the ruling parties, even the opposition seems to be resorting to caste mobilisation to hide their inadequacies by. Although the Opposition is trying its best to take on the ruling party by highlighting the government’s alleged failures, it appears to be banking on the caste arithmetic to romp home. 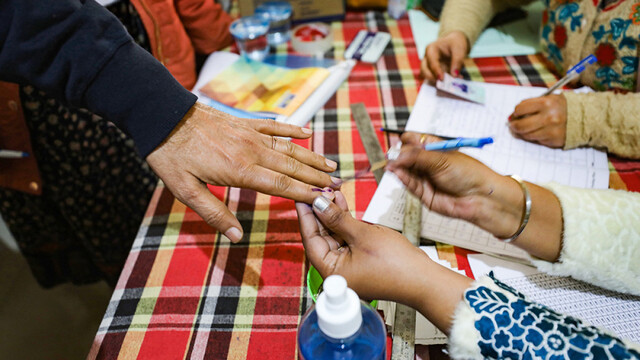 A voter gets his finger inked as he votes for Punjab Assembly elections, in Pathankot.

The all-important battle of Uttar Pradesh will have a huge impact not only on the state but also on the politics at the Centre. Not only this, it may also have a bearing on the presidential and vice-presidential elections to be held this year, not to speak of the 2024 Lok Sabha elections and all the state assembly elections to be held till then. It goes without saying that UP elections may well decide the future course of national politics. That is why the attempts of caste mobilisation is too perceptible there. It becomes clear by analysing some recent statements of various leaders on their campaign trail.

The impact of mobilisation is all the more pronounced in western Uttar Pradesh, where polling was held on February 10 and 14. It was especially noticed among Muslim, Jat, Gujar and Saini communities in the areas most affected by the peasant movement. The Jat, Gujar and Saini communities had turned to the BJP in the aftermath of the 2013 Muzaffarnagar riots, which helped it win three consecutive elections, the 2014 and 2019 Lok Sabha elections, and the 2017 assembly elections. But this time, the dominant Jats in the area appear to have switched their loyalties back to the Rashtriya Lok Dal (RLD), an ally of the Samajwadi Party.

As far as the Gujjars are concerned, they have expressed resentment against the saffron organisation over issues such as the peasant movement and the controversy over King Mihirdev’s statue. Also, one of the two Khaps of the Sainis has turned towards the SP-led alliance following the defection of its leader like Dharam Singh Saini, a minister in the Yogi government, who quit the BJP and joined SP recently. Nonetheless, Kashyap, Lodh and upper castes still remain solidly behind BJP. Also, a large number of Jatavs in this area are more or less with the BSP, but due to Mayawati's inaction, its youth votes have been split between the BJP and other alliances.

Another interesting thing happened during the second phase itself. From Bareilly to Shahjahanpur, the backward castes of Kashyap and Lodh, which rooted for the BJP, also showed an inclination towards the SP-alliance. The BJP has high hopes from the Central or Awadh region, but in the East, the fact that leaders like Swami Prasad Maurya, Dara Singh Chauhan, Lalji Verma are in its fold now may help the SP-led alliance. With the arrival of Harishankar Tiwari's son Vinay Tiwari, BJP’s Brahmin votes may also split.

The emphasis on the mobilisation of castes in the elections has been visible from the very beginning. This time, the SP has formed an alliance with smaller parties such as Rashtriya Lok Dal, All India Suheldev Samaj Party, Mahan Dal, Apna Dal (Communist), a Nishad Party. Apart from BJP ministers like Swami Prasad Maurya, Dara Singh Chauhan and Dharam Singh Saini, who broke away from the BJP, SP has inducted many influential leaders, who had left the BSP in 2016 to join the BJP. It has expanded its base by inducting Lalji Verma and many influential backward and Dalit caste leaders. The SP which had stitched alliances with Congress in 2017 and Bahujan Samaj Party in 2019 without any success, has tied up with small parties now.

It is a strategy almost similar to the one adopted by the then BJP President Amit Shah, which went a long way in ensuring the BJP's victory in successive elections after the Muzaffarnagar riots of 2013. By luring the non-Yadav backward castes and non-Jatav Dalit leaders away from the SP, BSP and Congress, the BJP had gained a significant edge in Bundelkhand as well as in central and eastern Uttar Pradesh.

The BJP benefited more from it in western Uttar Pradesh, where the Jat and Gujjar communities had come into its fold. In fact, after the demolition of Babri Masjid, many backward castes like Lodh, Koiri, a part of Kurmis had drawn towards the BJP due to leaders like former minister Kalyan Singh, Vinay Katiyar, Uma Bharti. Later, Kurmi's votes also went to the BJP with the addition of Apna Dal (Sonelal), whose Anupriya Patel is currently a Union minister.

After Modi was installed as the leader of the backward castes in 2014, the resentment among the most backward and non-Jatav Dalit castes was fanned by creating a perception that all the benefits of reservation are being taken away by the dominant castes. Also, there was a palpable resentment against the BSP and SP that had been in power for a long time.

All of that helped BJP register a record victory in Uttar Pradesh. It is often referred to as a miracle by Modi-Shah in the political circles, but the process to get rid of its age-old ‘Brahmin-Baniya party’ tag had begun in the BJP in the late 1990s by leaders like Govindacharya by bringing backward and Dalit castes into their fold.  It was called social engineering in contrast to social justice.

But this time, the consolidation of such forces looks shattered. Apart from Anupriya Patel's party and Dr. Sanjay Nishad's party, some small groups only have stayed with BJP, which had to struggle hard to persuade them to do so at the last moment. Nishad is said to be upset over the non-availability of reservation under the Scheduled Caste quota for his community, which was promised by the BJP earlier. Also, Anupriya's mother Krishna Patel has joined the SP alliance and is contesting from Pratapgarh while her younger daughter Pallavi Patel is in the fray in Sirathu against Deputy Chief Minister Keshav Dev Maurya, who was the BJP's backward face in 2017. 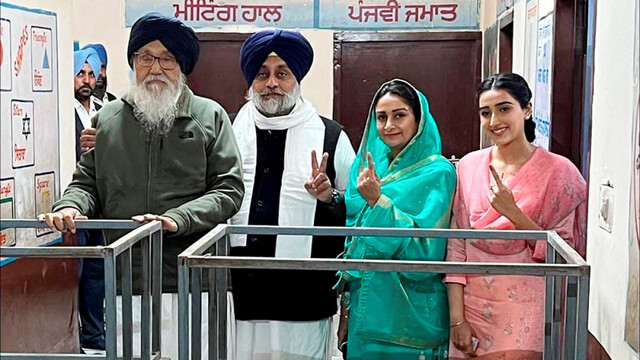 In fact, several backward leaders have complained that they were sidelined during the BJP rule in the past five years. According to political observers, Akhilesh sought to exploit such sentiments against BJP by widening the umbrella of his party for backward castes. It was apparently his way of getting his party to jettison the tag of a Yadav-Muslim party.

Interestingly, the SP-led alliance emerged as the main opposition against the BJP largely because Mayawati did not seem to be proactive enough in the election to prevent BSP's votes from getting scattered. Hence, even though the SP alliance did not make any special efforts to woo the Dalits, it may end up getting some benefits. Akhilesh

Now, the BJP is also trying hard on its part to get the Dalit votes. Earlier, it seemed to be confident of a split in the BSP votes in a triangular fight. But seeing the widespread disenchantment with the BSP among a section of Dalits, an attempt was made by BJP to send out a message in many areas that the BSP would ultimately join forces with the BJP. As of now, non-Jatav Dalits, however, still seem to be supporting the BJP, though the rape and murder of a Valmiki girl in Hathras can definitely cost it their votes in some areas. Incidentally, BJP is also playing the beneficiary card to woo the most backward castes and Dalits on UP. It is trying to mobilise those who have benefited from various government schemes.

As far as Congress is concerned, Priyanka Gandhi initially showed a lot of activism and created a lot of interest in women, but she could not make much headway. Hence, the election has become a two-way street between the BJP and the SP-led alliance.

It remains to be seen whether mobilisation of castes will turn out to be the most crucial factor in the assembly polls but the people queuing up at the polling stations undoubtedly want a government that will address real issues like inflation, unemployment, safety and security.