The Curious Case Of Women In Manipur Politics

At the fore on social and economic fronts, women are in the backseat when it comes to political representation

Grace Jajo’s voice first choked and then she broke into tears, a microphone in her hand, addressing a gathering at Manipur Press Club in Imphal, the capital of the northeast Indian state. It was February 6, three weeks before the first of the two-phase election in Manipur was scheduled.

“Today, the (withdrawal of) AFSPA is making it to the manifestos of every political party. But when the respected Irom Sharmila contested, she got only 90 votes. And that’s after 16 years of sacrifice! It’s a very emotional thing, to speak of this…”

Jajo, an independent journalist, was speaking on the ‘invisibility’ of women in Manipur’s political scene. She could not control her emotions once touching upon how Sharmila, known as Manipur’s ‘Iron Lady’, faced a humiliating electoral defeat in 2017.

“And look at how we treat the Muslim ladies. Najima Bibi got 33 votes! This is how you treat women! And just look at how parties are using AFSPA now, every political party. Shame on you!” Jajo said, trying to hold back tears before she could no more.

For a tourist in Manipur, her statement may come as a surprise – having seen women everywhere in the front, from managing markets to in the statues that dominate the city space – until one takes a look at the electoral records.

'Breadwinner But Not Leader': Warring Identities Of Women In Manipuri Politics

Sharmila had ended her 16-year-long hunger strike seeking the withdrawal of the Armed Forces Special Powers Act (APSPA), one of the biggest sentimental issues for Manipur’s people, in 2016 and launched her own party. She herself contested against the Congress’ Okram Ibobi Singh, who had been the chief minister for 15 years. Najima Bibi was also a candidate fielded by her party.

But its disastrous result in the 2017 assembly elections led Sharmila to quit politics, ostensibly with a broken heart.

In this 50 year's history of the modern Manipur state - it became a state from Union Territory in 1972 – it has had only six women elected to the 60-seat assembly. The Lok Sabha election for the two seats of Inner Manipur and Outer Manipur has been held since 1952 but only one woman has made it to the Parliament.

Of the six MLAs, four were wives of influential politicians, including chief ministers, and one's spouse heads an armed insurgent group.

This year has seen the highest number of women contestants and the numbers are still abysmally low - 17 out of 265 candidates are women. That’s only 6.41% of the total contestants in fray. In 2017, only 10 women contested and two won – Akoijam Mirabai of the Congress from Patsoi in Imphal West district and Nemcha Kipgen of the BJP from Kangpokpi in the eponymous district. Both had won the 2012 election as well.

This year, they are in the fray to become the first among women in Manipur to get elected for a third time. Both of them had served in ministerial roles - Mirabani in Okram Ibobi Singh’s Congress government between 2012 and 2017 and Kipgen a three-year term in the BJP’s N Biren Singh government since 2017.

However, critics have always said that behind Kipgen’s victory has been the influence of her husband - Semma T Thangboi Kipgen, the head of the Kuki rebel group United People’s Front that has a suspension of operation agreement with the government at present.

“The women of Munnipore and not confined as in Hindostan. They manage all the domestic concerns; nay more than that, they are more supporters of their families than their husbands are, and in many cases, they support them entirely,” wrote William McCulloch in his book, Account of the Valley of Munnipore and of the Hill Tribes, which was published from Calcutta in 1859. By Hindostan, he most likely referred to as ‘mainland India.’

McCulloch was not just another tourist - apart from serving the East India Company’s army in various capacities from lieutenant, captain and major to lieutenant-colonel in different parts of India and especially in the northeast, he also served as the Company’s political agent in Manipur. And his observations cannot be said to be wrong.

The state has consistently had higher female sex ratio than India’s national average, more female voters than male since the 1990s, and is known for a leading role of women in economic activities and social and civil rights movements – from the women-led movements ‘Nupi Lan’ of 1904 and 1938 against British forces and the Meira Paibi movement of women torchbearers and the anti-alcoholism movement of Nisha Bandh from the late 1970s to the solely women-run trading hub of Ima Market in Imphal. Not to forget sports in which females have enjoyed a better track record
over males.

And yet, Manipur’s ratio of women members of the assembly and the parliament is as skewed as it can get.

“Men in Manipur allow and encourage women to share social and economic responsibilities but not the political space. Families would hardly allow a woman to get an election ticket. I wanted to be in politics. I knew it from a young age. So, I remained a spinster,” Akoijam Mirabai, a rare species among politicians in Manipur, told this correspondent, battling a busy schedule of the electoral campaign.

Rare, because she is among the very few who did not benefit from the influence of a man.

Women’s door for the Manipur assembly opened as late as 1991 and it required a grand tragedy. Hangmila Shaiza made her way to the Assembly riding on the sympathy wave that swept the Ukhrul constituency in the eponymous hill district after her brother-in-law, Lungshim Shaiza, was assassinated in the midst of his election campaign in 1990. Her husband, Lungshim’s elder brother Yangmaso, was a two-time chief minister of Manipur who too was assassinated by the same insurgent group, National Socialist Council of Nagaland (NSCN), in 1984.

K Apabi Devi too got her chance after her husband, Keisham Bira Singh of the Congress, died in a plane crash in 1991. She was fielded and elected from Oinam in the bypoll.

In 2002, Wahengbam Leima Devi, wife of Congress leader Wahengbam Angou Singh who had been a Speaker in the Assembly and later a Rajya Sabha member, was the sole woman MLA. She also achieved the feat of being the first female minister in the state, in the first Ibobi government.

The first and the only woman MP so far, Kim Gangte, did not have any family backing either. A human rights activist, she won the 1998 election on the Communist Party of India ticket. Later, though, she switched from the Janata Dal (United), Manipur People's Party and the Trinamool Congress to the BJP and finally the Nationalist People's Party and has lost much of her political weight.

Given this context, how confident is Thounaojam Brinda, one of the star candidates in the twelfth Manipur assembly election, about winning? Without saying anything about possibilities, she gave a cryptic reply:

“We have to win, we have to succeed.”

“Women have taken a leading role in all spheres of life in Manipur, except for politics, because electoral politics in Manipur is dominated by money and muscle power and women do not have access to either. It’s high time the right women entered politics and end the dominance of these two menaces - the power of black money and muscles,” she said, speaking to this correspondence during a door to door campaign in her constituency, Yaiskul, in Imphal East district in the Imphal valley where the elections are scheduled in the first phase, on February 28.

Contesting on a Janata Dal (United)’s ticket, she is taking on the incumbent Bharatiya Janata Party (BJP) MLA Thokchom Satyabrata Singh, whom chief minister N Biren Singh inducted in his cabinet in 2020 as a minister in charge of the departments of consumer affairs, food and public distribution, law and legislative affairs, and labour and employment. 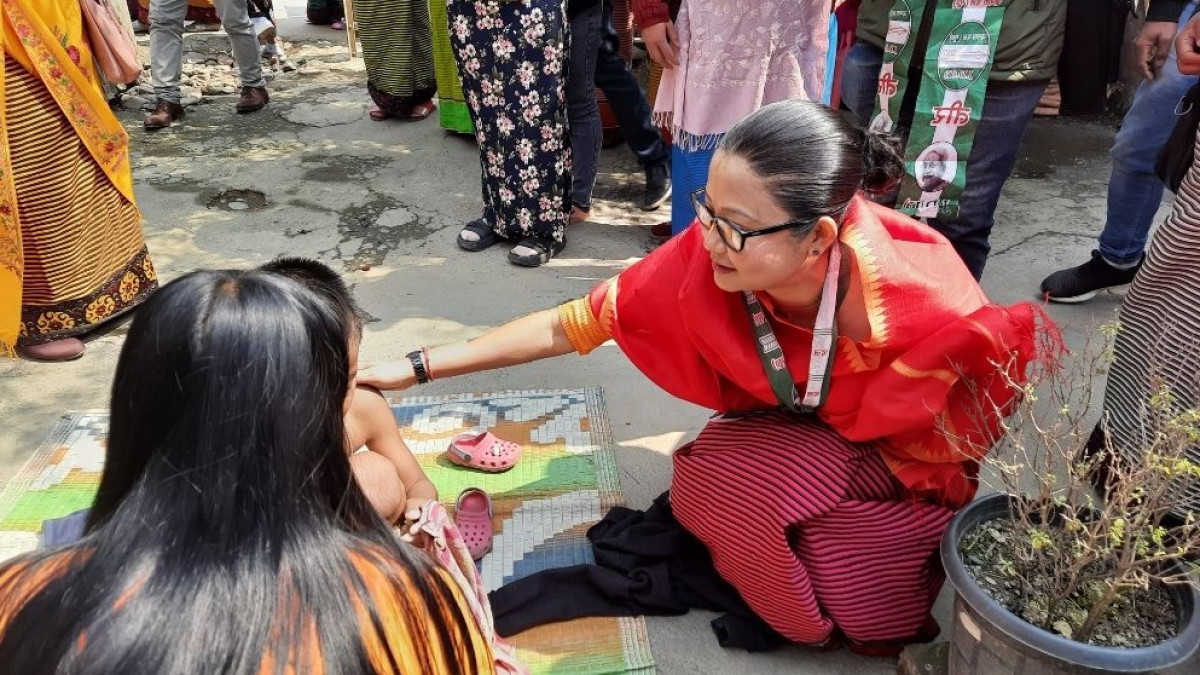 But Brinda is no ordinary candidate. An award-winning policewoman and celebrated crusader against drug rackets, she is also a daughter-in-law of Rajkumar Meghen, the founder-chairman of Manipur’s oldest and largest insurgent group, the United National Liberation Front (UNLF). Meghen, who was arrested in Myanmar in 2010 and handed over to India, returned to Imphal in 2019 after spending nearly a decade in jail.

Meghen, also known as Sana Yaima, or ‘son of the soil’, is a legend among the Meitei people, the Hindu Vaishnavite community that make Manipur’s largest community and are based in the valley. He has not endorsed Brinda’s participation in electoral politics - his organisation is still waging a war to ensure Manipur’s ‘sovereignty’.

But Brinda also has her own identity and own achievements to bank on. Women from different age groups make the lion’s share of her campaign teams. She has gained a great deal of media attention for sure. 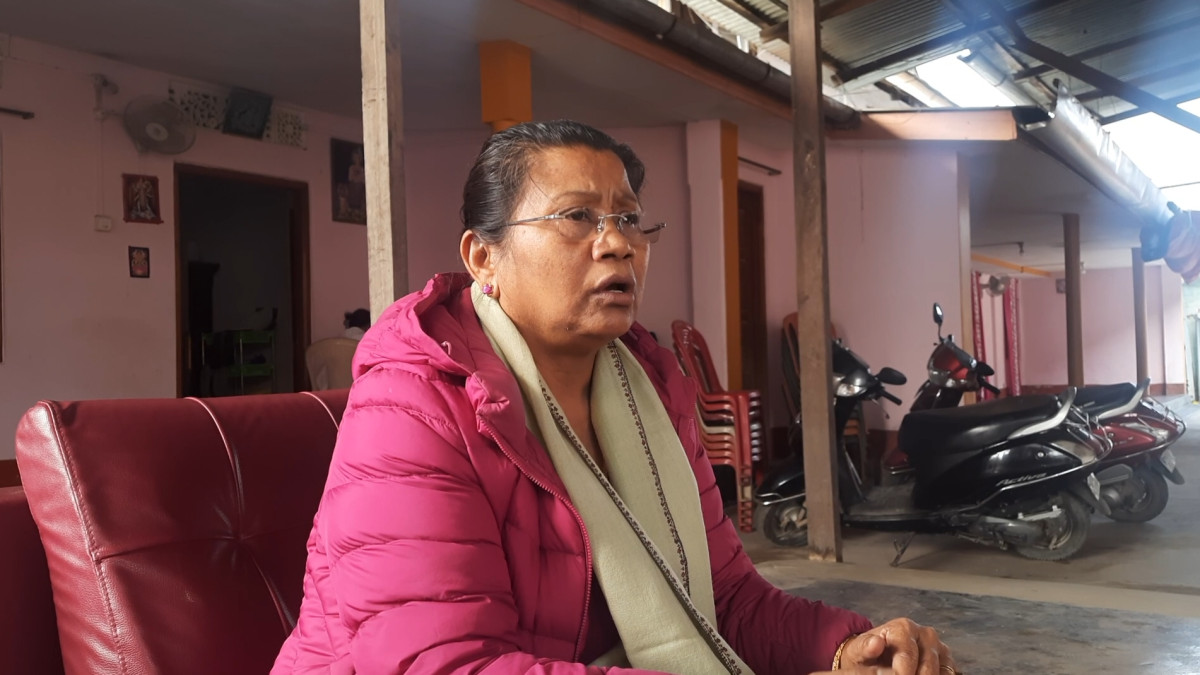 The story, however, will remain incomplete without speaking
of Adhikarimayum Sharda Devi, a woman politician from Brinda's constituency, Yaiskul, who would leave no stones unturned to defeat her.

Sharda Devi, who has been with the BJP since the mid-1990s, and without much family backing to speak about, was appointed as the BJP's Manipur unit president last year. That was a historic move - a major party in the state getting a woman chief.

"With my appointment, the BJP made it clear that it intended to empower women. Our manifesto also took special care of women's issues. We will change the gender dynamics in politics," she said, sounding gratuitous and confident.

How many of these 17 candidates would win remains to be seen. So far, the highest number of women MLAs has been 3. No one knows if that track record can be improved. But one candidate's victory is possibly a foregone conclusion - S S Olish, contesting from Chandel on a BJP ticket. She has previously contested the elections twice from the same seat as independent but this time its different. She is a member of the BJP's state executive and known to be 'very close' to the incumbent chief minister. "She is Biren Singh's top priority candidate. None can defeat her," said a BJP worker at Chandel, unwilling to be named.