The win takes Real Madrid to 60 points at the top of the La Liga 2021-22 table, nine points clear of second-placed Sevilla. Benzema scored in 83rd minute.

Like so many times this season, when Karim Benzema and Vinícius Júnior click for Real Madrid, defenses crumble against the leaders of La Liga 2021-22. (More Football News)

Benzema scored late from an assist by Vinícius to snatch Madrid a 1-0 win at Rayo Vallecano on Saturday, helping to increase the gap over second-place Sevilla to nine points. Atlético Madrid took a stand against Russia’s invasion of Ukraine before beating Celta Vigo 2-0.

Before kickoff, Atletico’s Wanda Metropolitano Stadium was lit with the yellow and blue colours of the Ukrainian flag and bore the message “Stop War.” It then flashed the same message inside the stadium during the team introductions.

Also in the Spanish capital, the stands of Rayo’s Vallecas Stadium displayed signs against the war with a Ukrainian flag hung by supporters.

The La Liga included the message “NO A LA GUERRA” (“No to the War”) next to the score at the top of the screen of all televised broadcasts of Spain’s first- and second-division league games this weekend.

Benzema and Vinícius finally unlocked Rayo’s defense in the 83rd minute when a passing exchange inside a packed area between the strike partners left the France striker clear to score the winner.

“(Benzema and Vinícius) have been playing together for four years and, being the great players they are, they understand one another to perfection on the field,” said Madrid goalkeeper Thibaut Courtois, who made two big saves to maintain the stalemate until Benzema broke through.

Played clear by Benzema’s short throughball, Vinícius generously squared the ball back to the heart of the area after having drawn goalkeeper Luka Zidane off his line. Benzema only had to tap in the ball.

It was Benzema’s league-leading 19th goal. He has scored 26 goals in 31 games across all competitions for his club this campaign. Vinícius, who is enjoying a breakout campaign at age 21, has added 13 league goals for Carlo Ancelotti’s side.

Sevilla face an always-tough derby with third-place Real Betis on Sunday, just six weeks after their Copa del Rey clash was marred by a Betis fan hitting a Sevilla player in the head with a piece of PVC. 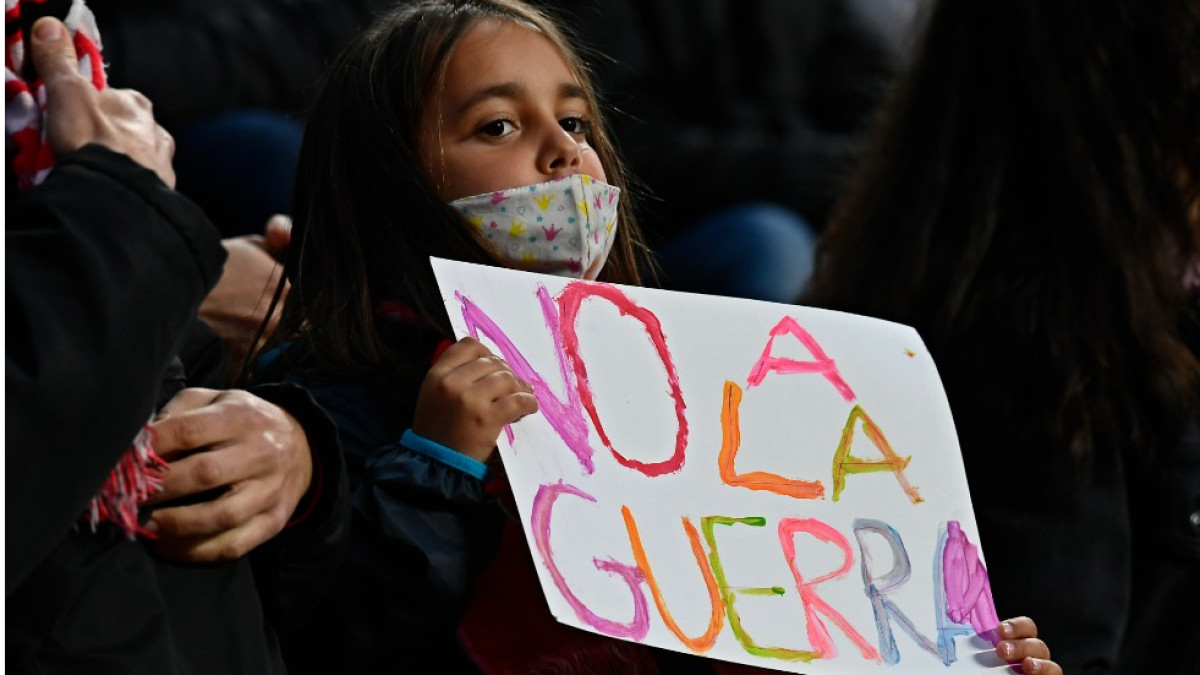 A young supporter holds a message reading 'No to the War' on the stands during Rayo Vallecano vs Real Madrid tie in La Liga 2021-22. (Photo: AP)

On Thursday, Rayo visit Betis aiming to overturn a 2-1 loss in the return leg of their Copa del Rey semifinal. Madrid, meanwhile, will play Real Sociedad next weekend before it hosts Paris Saint-Germain on March 9 needing to come back from a 1-0 defeat in their Champions League round-of-16 tie.

Playing with 10 men for an hour, Getafe rallied for a 2-2 draw at home with Alavés in a comeback led by Enes Unal’s brace that included an astounding strike from near the touchline.

After Jorge Cuenca was shown a direct red for a dangerous tackle, Alavés twice went ahead with goals by Gonzalo Escalante and Edgar Méndez.

Each time Unal brought the hosts back, first with a header and then with a superb strike from a tight angle on the right flank. His scorcher screamed over goalkeeper Fernando Pacheco and landed just inside the post in the 72nd.

“That goal goes in once every 50 times, and he pulled it off,” Escalante said about Unal’s second goal. “It was a great goal and we have to congratulate him for it.”

Unal has become the league’s hottest scorer with braces in three of his last four matches. After going without a goal in his first 10 games of the season, the 24-year-old Turkey striker has found the net 13 times in 15 appearances. His career-high for an entire season was eight goals in 2019-20.

Renan Lodi scored twice from two assists by Geoffrey Kondogbia to lead his team to victory over Celta as Atlético climbed back past Barcelona into fourth place.

Lodi, who had seen his playing time reduced this season, excelled as a left wing back with new signing Reinildo Mandava covering his back as a third center-half. The Brazilian twice latched on to long passes from Kondogbia to score in the 36th and 60th.

Valencia’s Gabriel Paulista struck an early goal from well outside the area to help beat Mallorca 1-0 in the defender’s first match after being sidelined for four months due to a right hamstring injury. Mallorca coach Luis García was sent off in the final minutes for protesting.