The last time Eden Gardens hosted a T20I was between India and New Zealand in November.

The three-match India vs West Indies T20 international series in Kolkata will see 75 per cent spectator attendance at the Eden Gardens after the Government of West Bengal issued newly updated regulations on Monday. (More Cricket News)

Meanwhile, Gujarat Cricket Association has announced that all the three ODIs in Ahmedabad will be played behind closed doors. The first ODI on February 6 will also mark India's 1000th ODI appearance.

As per a West Bengal government notification issued on Monday, “all indoor and outdoor sports activities will be allowed with 75 per cent of the capacity of the venue” which means a crowd attendance of around 50,000 can be expected.

The last time Eden Gardens hosted a T20 international was in November when India defeated New Zealand by 73 runs to clinch the series 3-0 with 70 per cent attendance. It was also the first time international cricket returned to Eden Gardens since the Covid-19 pandemic started.

West Indies, who defeated England 3-2 at home in T20 internationals, have already left for India. The Kieron Pollard-led side will play three ODIs in Ahmedabad on February 6, 9 and 11 before flying to Kolkata for the shortest format. Eden Gardens will host the T20s on February 16, 18 and 20.

As per the original fixture, the West Indies were slated to play three ODIs in Ahmedabad, Jaipur and Kolkata and three T20Is in Cuttack, Visakhapatnam, Thiruvananthapuram. But with the rising cases of COVID-19 in the country and also to cut on travel, the BCCI decided to hot West Indies in two venues.

“We are thankful to the honourable Chief Minister Mamata Banerjee, chief secretary and Government of West Bengal for announcing the resumption of sporting activities as well as for allowing 75 per cent of the capacity of spectators back to the stadium,” Cricket Association of Bengal (CAB) president Avishek Dalmiya said in a statement. 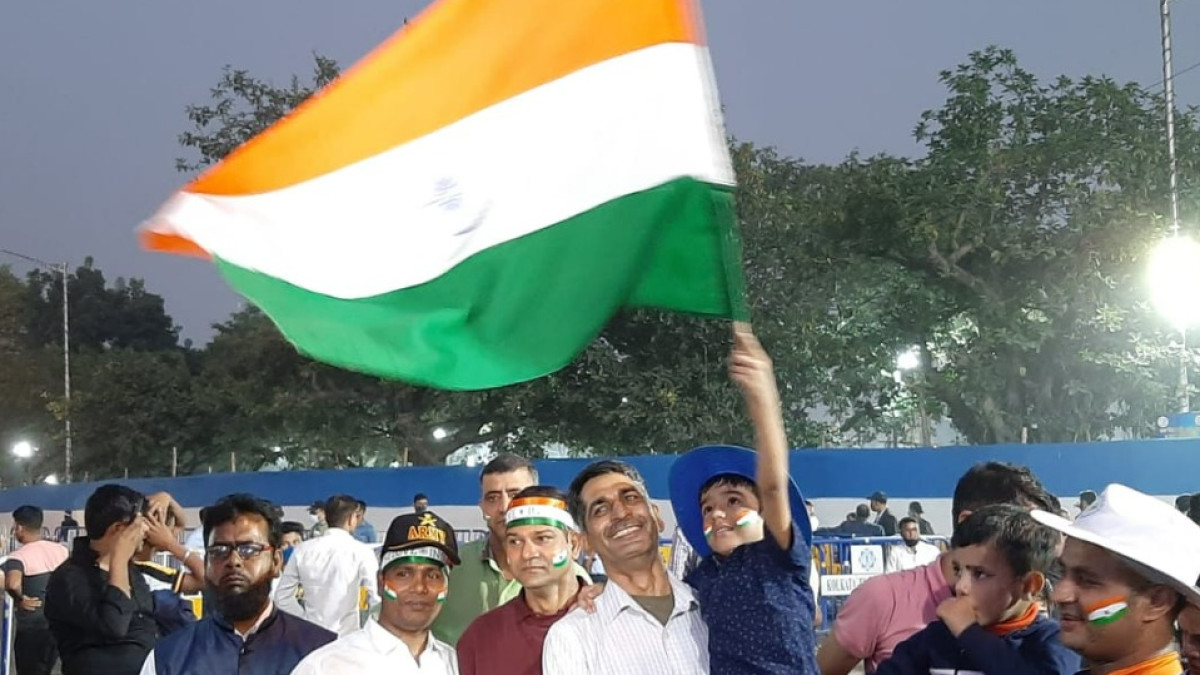 A child waves the Indian flag outside the Eden Gardens in Kolkata before the India vs New Zealand 3rd T20I in November. (Photo: Outlook)

“We feel that it will give a fresh lease of life to the sportspersons of the state. This time too, CAB is confident that it will be able to successfully host the three T20Is against the West Indies in a similar manner,” Dalmiya added.

Cricket at the Eden Gardens means a boost in the livelihood of several shop owners at the adjacent Dr Bidhan Chandra Roy Market, popularly known as Maidan Market in the Esplanade region. The shops wore a deserted look back in November when New Zealand visited since the majority didn’t have any idea of Rohit Sharma and Co. touching down in the City of Joy.

This time, the scenario is expected to be different. Moreover, it’s three games compared to last time’s one. Meanwhile, Kolkata has seen a dip in COVID-19 cases as compared to the start of the year. On January 31, Kolkata logged recorded 179 new Covid cases compared to 7,484 recorded on January 7, according to The Telegraph Online.