More from Nilanjan Mukhopadhyay
View All

Announcements on successive days by the warring self-styled community representatives unveiled the likely turn of events in 1989, insofar as the dispute over the shrine in Ayodhya was concerned. The newly formed AIBMAC (All India Babri Masjid Action Committee) declared in the Indian capital on 31 January that it was forming hifajati dastas or ‘defence squads’ to protect the mosque from attempts of the VHP activists to demolish it. Their leaders announced that secret squads would be ‘trained adequately to sneak into the inner ring’ of the shrine and ‘maintain a vigil’ to prevent ‘assembly of VHP activists with the aim of demolishing the mosque’. Undeniably, the plan, if allowed to go through by the government, had the potential of setting off nationwide violence. But even before a coherent response could be articulated to this announcement, the other, and the unambiguously more potent, declaration was made by the VHP at Allahabad where the Maha Kumbha Mela was being held. In hindsight, there appears little doubt that the calendar of events was planned in advance by the dramatis personae on both sides and they merely went through preordained motions at formal meetings.

On 1 February 1989, not just the VHP’s, but the entire Sangh Parivar’s most ambitious religiopolitical campaign since the stormy anti-cow-slaughter agitation in 1966 was announced. Leaders declared they would conduct the shilanyas ceremony to symbolically lay the foundation of a new Ram temple at Ayodhya on 9 November 1989.

The chosen date coincided with the annual festival of devothan ekadashi, the day when gods are believed to rise from slumber. The foundation-laying ceremony was a novel ritual in the Indian political theatre and it was scheduled right in the middle of the election season so as to extract maximum political benefit for the BJP by ensuring that the Ram temple matter became a significant talking point in electoral discourse. Pilgrims in tens of thousands traditionally gathered in the temple town during devothan ekadashi. The VHP was thereby assured of a base level of crowds in Ayodhya for the ceremony. Yet, it left no stone unturned to mobilize support and eventually succeeded in assembling a sea of humanity. 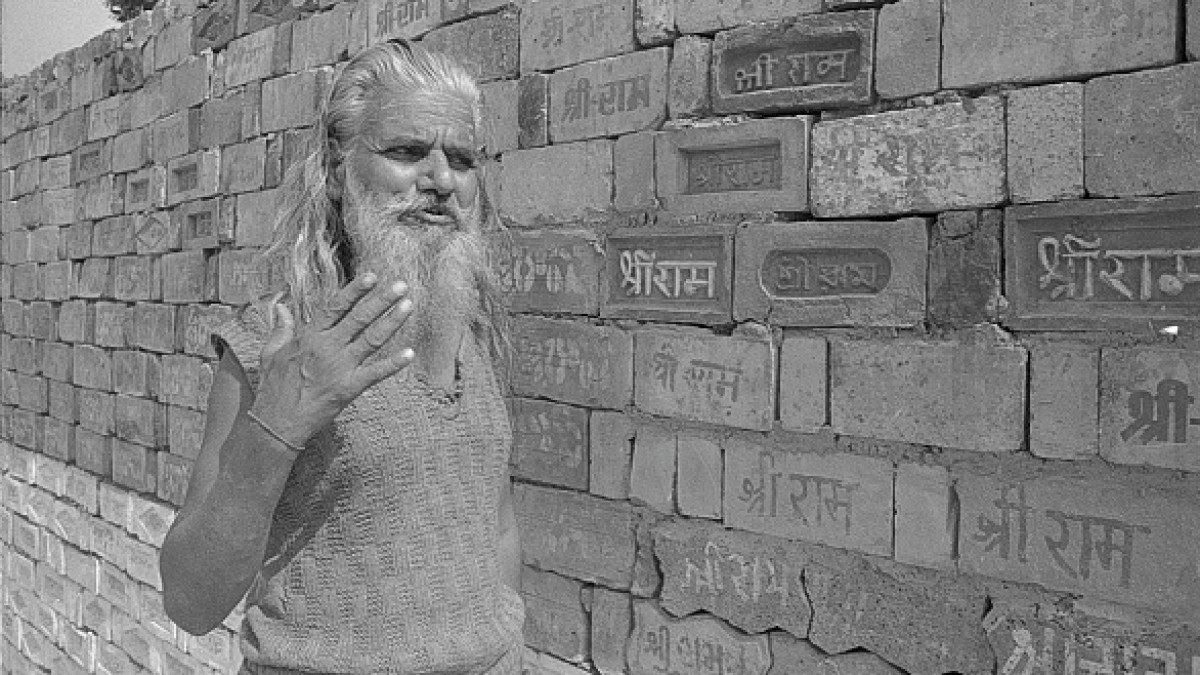 This was done by a mass campaign, called Ram Shila Pujan, for which specially manufactured bricks, with Shri Ram written on them, were consecrated in religious rituals performed in hundreds of thousands of cities, towns and villages following which they were eventually transported to Ayodhya in processions to be used for constructing the temple. The two programmes, the shilanyas and the Ram Shila Pujan, appeared ludicrous initially because the VHP was apparently jumping the gun by laying the foundation of the temple much before a judicial verdict.

Moreover, the land around the Babri Masjid was also disputed because the legal cases involved multiple plots of land. Furthermore, the brick consecration ceremony had no precedence and there was no certainty that people would get enthused with it.

Shahabuddin was one of the few who foresaw the likely impact. It was dusk on a cold February evening when I parked my bike in the driveway of his modest official Janpath residence. Those days reporters could walk in on politicians known to them during ‘civil’ hours. Shahabuddin, as usual, peered at me through piles of newspapers, magazines, books and official reports while sitting on his CPWD chair. Pleasantries over, I informed him about the VHP announcements. His face turned ashen when I told him about the shilanyas and Ram Shila Pujan programmes, providing further details about the Ram Shila Yatras to Ayodhya. ‘With this programme, the VHP has ensured that it will never have to look backwards on their road to Ayodhya,’ he said softly. I must have had a quizzical look on my face for he explained, the shila pujan would give Hindus, even in remote reaches of India, a chance to ‘participate’ in the agitation. Shahabuddin was not alarmist in his response for the VHP too believed that successful execution of the Ram shila programme would ‘give a sense of belonging to the Hindus at large’.

From 1853 To Today, A Timeline Of Babri Masjid Saga

It turned out exactly as the VHP had predicted. The very act of ‘touching’ the bricks gave people a sense of participation without even stirring from their homes. The token money they paid as offering provided a sense of having contributed to the cause of the Ram temple.

VHP reports later recounted that during the shila pujan programme specially printed coupons in denominations of Rs 1.25, Rs 5 and Rs 10 were sold. These coupons were often proudly displayed by people as noted by this writer and several other reporters. The VHP was clear that this was another reach-out and the intention was to ensure that every person participating in shila pujan rituals contributed at least Rs 1.25. The campaign was replicated in early 2021 with the door-to-door nationwide fund-raiser from 15 January till the end of February to raise further resources for the cash-rich Shri Ram Janmbhoomi Teerth Kshetra Trust.

The campaign led to communal violence in some states although fortuitously not on the scale of 1989. Following instructions of RSS chief Mohan Bhagwat that not a ‘single house’ should be missed, VHP activists went from house to house, amid the pandemic, seeking funds. RSS leaders declared they ‘expected’ every Indian family, regardless of religious faith, to donate for the temple. The Indian media reported that stickers were pasted in houses of families who donated. Absence of donor stickers marked those who did not contribute for the temple. In history, there are numerous instances of mobs targeting homes that were previously marked out. 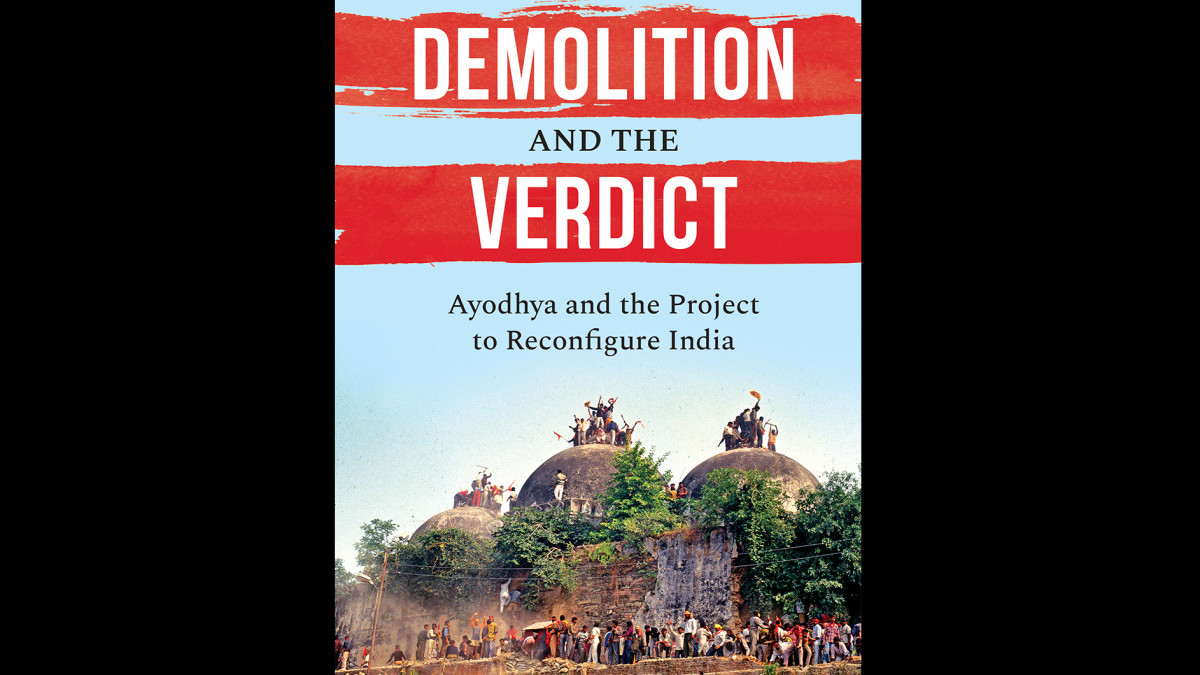 Book cover of 'The Demolition and the Verdict' by Nilanjan Mukhopadhyay

People’s response to the two mass-contact programmes, separated by almost thirty-two years, highlights the dramatic rise in the support for Hindutva over this period. The shila pujan campaign was to seek support for a demand that had the backing for just one section of Hindu society.

It was partisan in nature and there was no socio-political consensus on the demands of the Ayodhya agitation. Several parties and groups of people who principally supported the claim for a Ram temple at Ayodhya did not back the confrontation set up with this drive.

In contrast to the sectional backing for shila pujan, the fund-raiser in 2021 was not opposed by the majority of mainstream political parties. The campaign was given legitimacy by the State when the President of India became the first donor, albeit in his personal capacity. Several other public personalities who held public offices followed. This marked a blurring of lines between religion and state on the one hand and religious activity and political campaigns on the other hand. The entire fund-raiser was treated as a national programme with the tacit backing of the State.

The above was an excerpt from The Demolition And The Verdict: Ayodhya And The Project To Reconfigure India by Nilanjan Mukhopadhyay (Speaking Tiger Books, Rs 699, pp 336)