Outlook goes to ground in the temple-town Ayodhya. The political mood is mixed in the saffron strong-hold. Will the new tourist driven economy make a difference to the city? We explore.

More from Ashutosh Bhardwaj
View All

Ayodhya is the seat of perhaps the most stoic of the Hindu deities, but the elections here are loud and layered, with one factor downplaying the other. To begin with, there's visible support for the BJP over the temple’s construction. Local economy has surged following a manifold increase in the tourist footfall. The construction has enhanced people’s faith in both Prime Minister Narendra Modi as well as Uttar Pradesh Yogi Adityanath.

However, it has also brought in the city a large number of mahants, supported and patronised by Adityanath, which has drawn the ire of the existing Brahmin establishment. “Anybody in saffron robes is now a mahant in Ayodhya. It’s annoying,” says an influential Brahmin.

The boast that Adityanath visited Ayodhya “40 times” during his tenure as the CM has also not gone well with the city’s Brahmins who see in it an encroachment of a Thakur in their territory. They are angry with Adityanath for giving attention to new mahants. It was perhaps thus that Adityanath who was once believed to have been contesting from Ayodhya later shifted to his safe home seat of Gorakhpur. 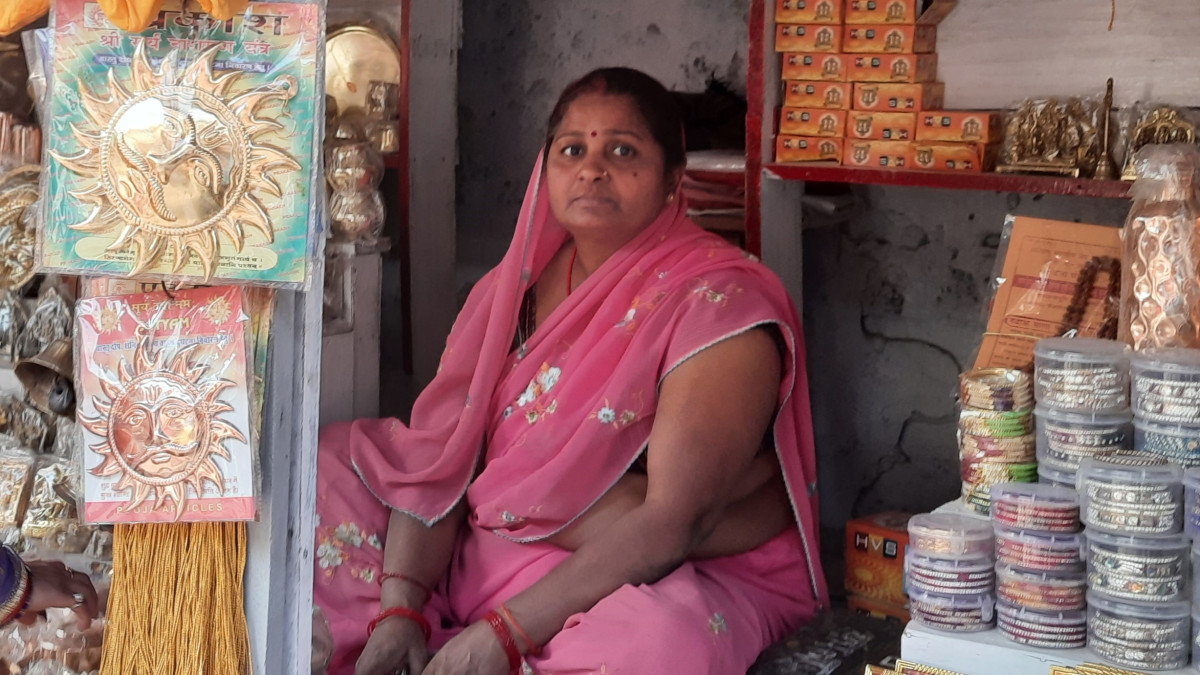 Then there is Samajwadi Party candidate Tej Narain Pandey, a Brahmin who has personal rapport with a number of influential members of his community. To make things more difficult for the BJP, many people are unhappy with the sitting MLA and party’s candidate Ved Prakash Gupta who, they say, is rarely visible in the area.

It brings the slogan one now hears among Ayodhya’s BJP members: “Jo chahe haar jao, lekin yahan mat haro (Lose whatever you want, but don’t lose here).” It explains the constituency’s significance for the BJP, as well as the party’s despair. Several senior RSS and BJP leaders have been camping in Ayodhya for the elections. After all, it was the temple movement that brought the party to power, both in Uttar Pradesh and in the centre.  “If there’s still resentment after the construction of the temple, you can imagine the situation,” says a local Brahmin leader.

The situation is strikingly similar to Mathura where several BJP supporters were unhappy with the sitting party MLA Srikant Sharma, but said that they would vote for Yogi. In Ayodhya, however, some BJP voters also seem unhappy with Yogi.

Ayodhya saw two road-shows ilast week, by CM Adityanath as well as by the CM aspirant Akhilesh Yadav. Both the rallies were marked by saffron slogans. Akhilesh has been frequently using the Hindu imagery in this election. When the BJP had raked the issue of Mathura in January, he had responded by saying that “Krishna comes to my dreams”. In Ayodhya this week, he wore saffron and wielded a mace with a priest by his side.

Ram Temple To Be Ready By 2025, But Devotees Will Be Allowed Earlier

A little distance from the temple complex is Karsevak Puram, built by Vishwa Hindu Parishad in the memory of those killed during the police firing in 1990 when they were attempting to reach the Babri mosque. At Karsevak Puram are large cutouts of RSS Sarsanghchalaks and VHP leaders, who spearheaded the temple movement, besides that famous image of men atop the mosque on December 6, 1992, just before it was razed. One of the VHP members who was present at the spot on that day now lives in Karsevak Puram. Purushottam Narain Singh, 85, joined RSS in 1950 and became pracharak in 1958, dedicating his life for the Sangh. Recalling the demolition, he says: “It was a daiviya shakti (divine power) that made that happen.”

But Ayodhya has had some other moments too, and perhaps the finest one is the part of the city’s lore. The court case about the ownership of the complex had two prime litigants, Hashim Ansari for the mosque and Ramchandra Paramhans for the temple. Both of them would often go together in a rickshaw or tonga for the court hearing.

Life comes to the town

Ayodhya is one of the five seats in the Ayodhya Lok Sabha constituency. The BJP won all five in 2017. A total of 60 seats in 11 districts go for vote today. The saffron party had won 48 of these in 2017, whereas Samajwadi Party had 42 in 2012, including Pandey from Ayodhya.

Amid the electoral buzz, Indradev Singh (12) sells flags and banners of Rama and Hanumana at the temple complex. With the beginning of the temple construction many new vendors have come up, and the most prominent seems to be flags and banners. Singh’s father, a rickshaw-puller, died during the lockdown. He broke his hip in an accident, but couldn’t get proper medicare due to the lockdown. His mentally challenged mother and elder sister stay at home. Both the siblings dropped out of the school after their father's death.

Temple has brought some life to the town. This reporter was in Ayodhya during Diwali of 2016 on a reporting assignment. It was surprising to find that the festival was bereft of the lights one associates with it in other parts of northern India. Diwali in Ayodhya, locals said, has often been “fiki" (flavourless). Compared to the other famous and vibrant temple cities like Mathura and Kashi, Ayodhya looked desolate and melancholic. 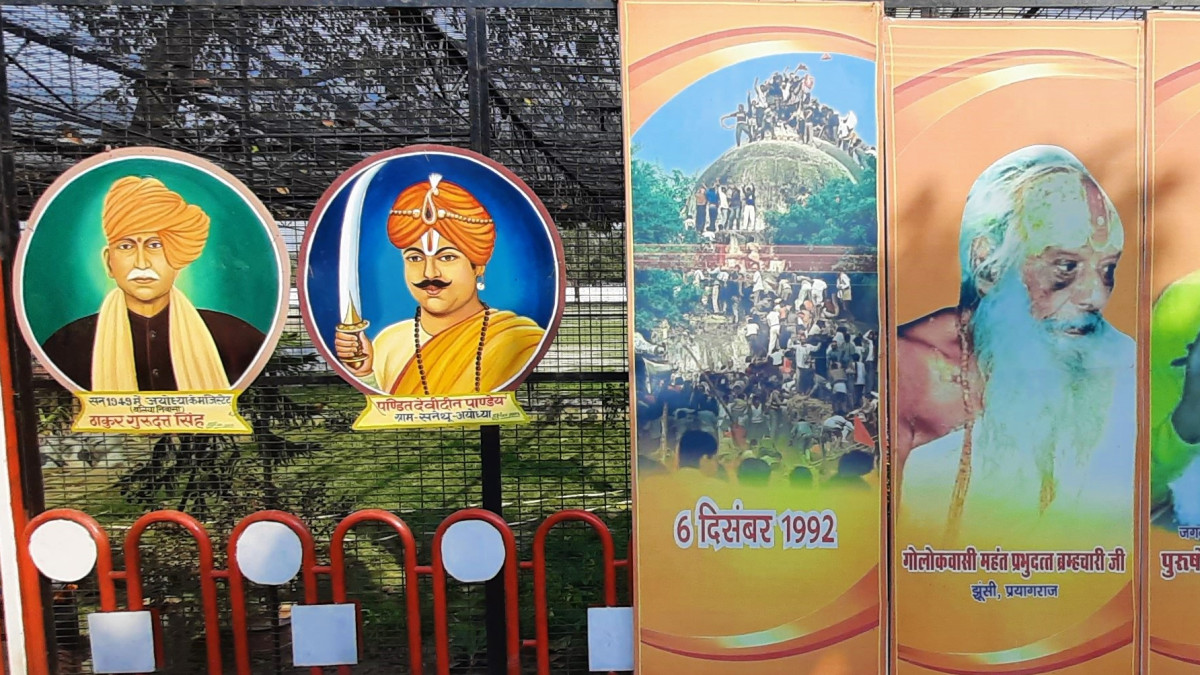 They called it Sita ka shraap (the curse of Sita). “When Sita was wrongfully accused and banished from Ayodhya on account of a washerman, the inhabitants of this city were cursed that they would never prosper. Ayodhya carries the burden of that curse,” said Shubhangie Mishra, a young member of Ayodhya’s erstwhile royal family.

The city now looks boisterous. “Tourists have increased manifold after the foundation stone was laid,” says Sudha Pandey, who runs a shop at the temple complex.

That reminds of what Mahant Satyendra Das, the head priest of the them makeshift Rama temple, had once told this reporter about Sita’s curse. “If you cause injustice to a true saint, even if she doesn’t say anything, you will inevitably be hit by her curse.” “Rishiyon ki kshama shraap se bhaari (A sage’s forgiveness is heavier than her curse). Ayodhya has been in ruins since,” he had said, insisting that her curse is felt periodically.

How does the temple construction impact the “curse”? Ayodhya is waiting for the answer.