No Pay And False Promises: Watch The Plight Of Delhi's Anganwadi Workers

The Anganwadi workers alleged that they have been deprived of their minimum wage and held the AAP government accountable for making false promises over the ages.

More from Shreya Basak
View All


Rajni is among 10,000 Anganwadi workers, who took out a rally in Civil Lines, Delhi, on Friday demanding a raise in their wages. The rally, which was organised by the Delhi State Anganwadi Workers and Helpers Union, was part of the “indefinite” protest that has been going on since January 31 in front of Vikas Bhawan and entered its 12th day today.

For over a week, the Union has been demanding an increment in the honorarium of the women workforce in addition to being formally recognised as employees. The workers say that they are deprived of their minimum wage and blame the Arvind Kejriwal government for making false promises over the ages. 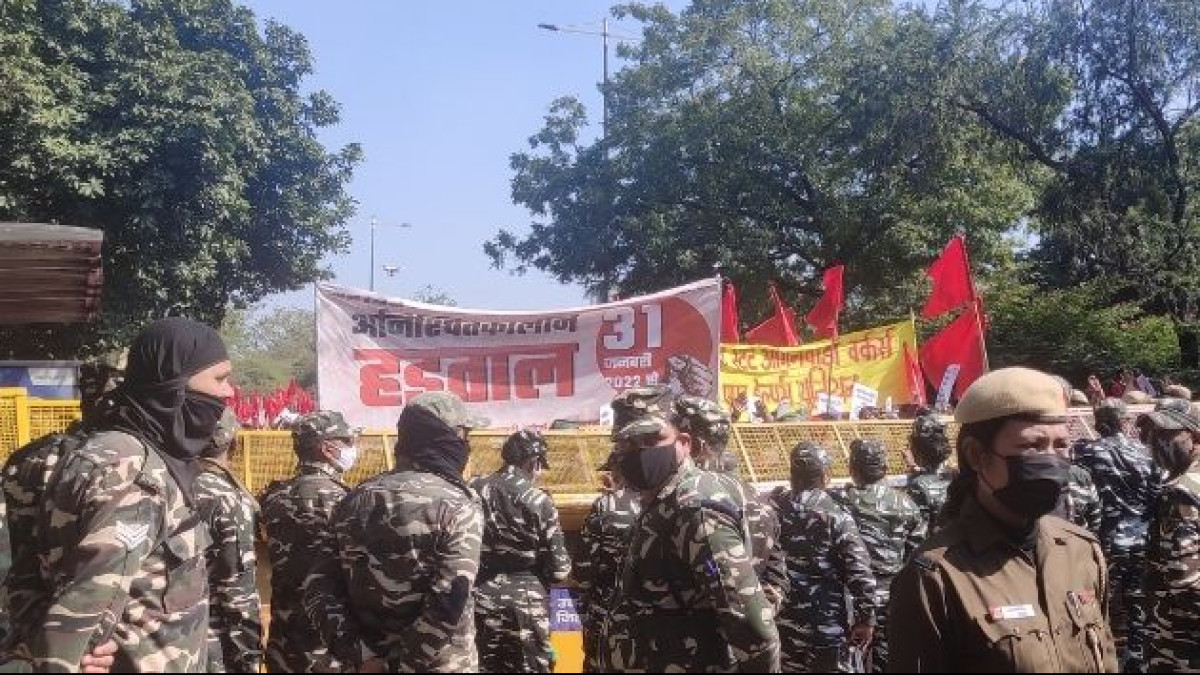 A placard at the protest site in Civil Lines, Delhi. (Credit: Shreya Basak)

Assembly Polls 2022: Promises Galore But Where Are The Jobs?

“We don’t even get Rs 5,000 a month. Our monthly income is that low. And at times, the money gets delayed by two to four months. I have three children at home and my husband suffers from physical disabilities. Being the sole earner of the family, how will my ends meet?”, said a visibly worried Sunita as she spoke to Outlook. Sunita has been an Anganwadi worker for over 10 years, but she has enjoyed little to no benefits to date.

Anganwadi workers and helpers are part of the government’s Integrated Child Development Program, which was first started in 1975. They are employed by the government to look after the primary healthcare, immunisation, meals, and preschool education of children under 6 years of age.

As many as 11,000 Anganwadi workers in Delhi are paid Rs 9,678 and 11,000 helpers are paid Rs 4,839 per month. But they demand that the amount be increased to Rs 25,000 for workers and rs 20,000 for helpers. The last increment was made in 2017. Over five years, Anganwadi workers, who were declared as frontline workers during the harrowing Covid-19 second wave, are raging against the AAP government.

“While the AAP (Aam Admi Party) government is busy making tall promises of jobs and employments in poll-bound states, has Kejriwal noticed the state of the women workers in his own state?” asked Lalita, who has two daughters at home and has not been able to pay her rent for nearly two months now.

“Our demands are at two levels. While the state government must increase their honorarium, the Centre must recognise them as formal sector workers, so that they also have benefits including pension, dearance allowance and so on,” said, Amit, a representative of the Union. 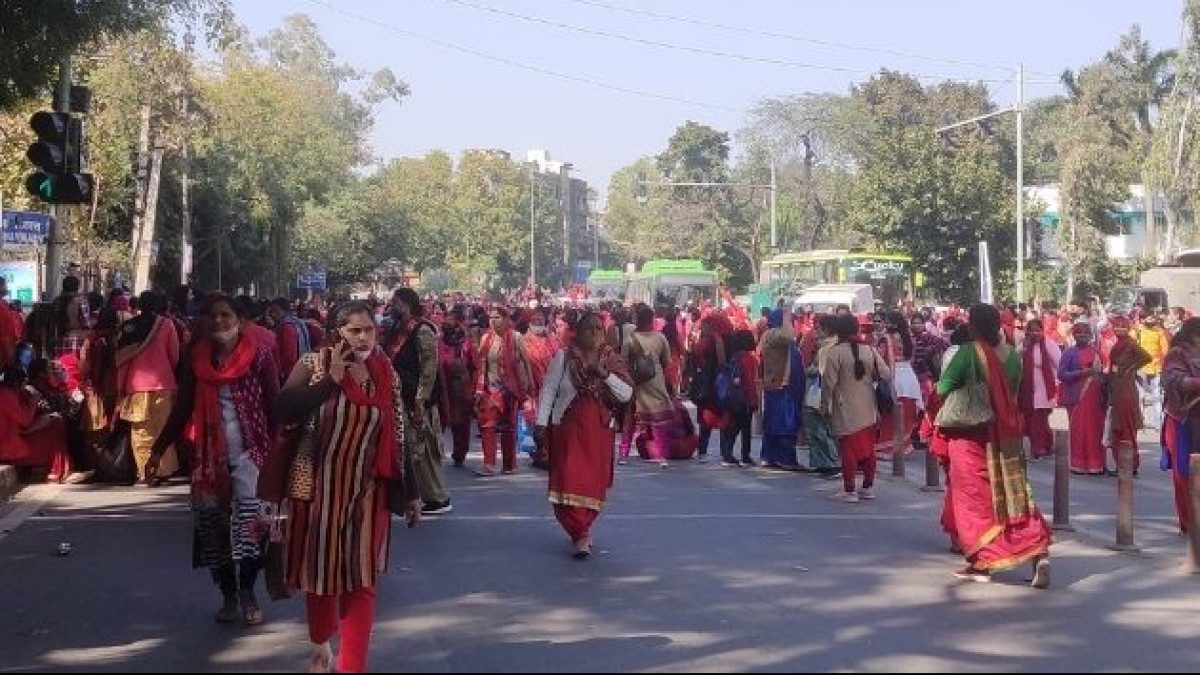 The woman workforce in the rally. (Credit: Shreya Basak)

“Even the phones given by the Kejriwal government in 2017-18, do not even function properly. Most of us do not even have cell phones, yet, we have to spend from our own pockets for internet charges because we are required to update data on the Poshan Tracker app. Forget about reimbursements of any kind,” said Ragini, an Anganwadi worker from Delhi.

During Covid-19, the Anganwadi workers were made to visit homes, distribute food, volunteer at Centres, carry out vaccination drives to remote places, arrange food for infants, yet no safety protocols were followed for them. The women raised an alarm over the lack of compensation and safety.

Ragini added, “Not even a single mask was given to us. From our convenience fees to our savings, that was spent on aiding others, nothing ever was reimbursed.”

And not just wages, but no holidays. The workers are eligible for 20 holidays in a year. However, with every holiday they take, a sum is allegedly deducted from their already, low, pending wage.

“There are no specific work hours as well. We are supposed to work from 9 am to 2 pm. However, even at 12 at night, our supervisor calls us and demands the work to be done. At the Centres, they deliberately get our food late and make our stay till 5 pm,” alleged Rajni.

They say that they are called at any time of the day and must be available at all times. When they are late even by a few minutes, they are not paid for the day.

Whereas most Anganwadi workers in India are women, the men are often assigned as their supervisors, making situations more uncomfortable for them. Often these supervisors threaten to fire them if they refuse to comply with a superior’s order. 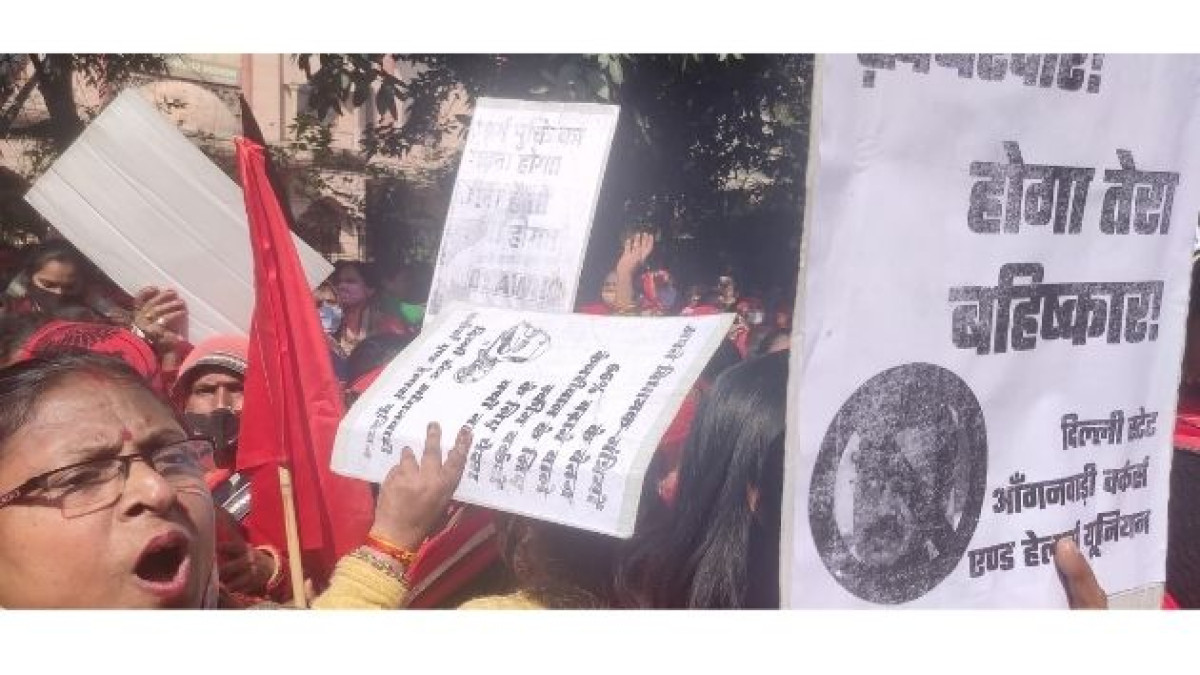 Workers alleged that they are forced to attend political campaigns of AAP, to add on to their crowd, whereas, the anger against the government flares up every day.

“We are made to do much extra work in lieu of false promises and money. Even a meagre amount of Rs 30 is not paid to us, even if promised. Where do we go? How do we manage,” said several healthcare workers.

Anganwadi protest in the past

The Delhi Anganwadi Workers and Helpers Union led by Shivani started their struggle against the low wages paid to the women workers in June 2017.

The workforce is paid in terms of honorarium as against salaries paid to the formal sector workforce. According to reports, the honorarium paid does not meet the wage standards of Indian Labour Regulations and there have been various movements at local, and national levels, with the support of various trade unions, to bring in fair wages for the Anganwadi workers and helpers and recognise them as formal sector workers.

In 2017, a similar protest was taken out by the Anganwadi workers demanding an increment in their wages. And it did yield results. Following this protest, the workers’ wages were increased from Rs 2500 and Rs 5000, quite an abysmal amount. The strike was called due to the alleged non-implementation of a legally binding agreement made by the Kejriwal government in July 2015, which clearly stipulated that the honorarium of workers and helpers will be increased. However, it still replicates the fact that the increased honorarium doesn’t serve the basic need of a decent livelihood for workers and helpers in a metropolis. 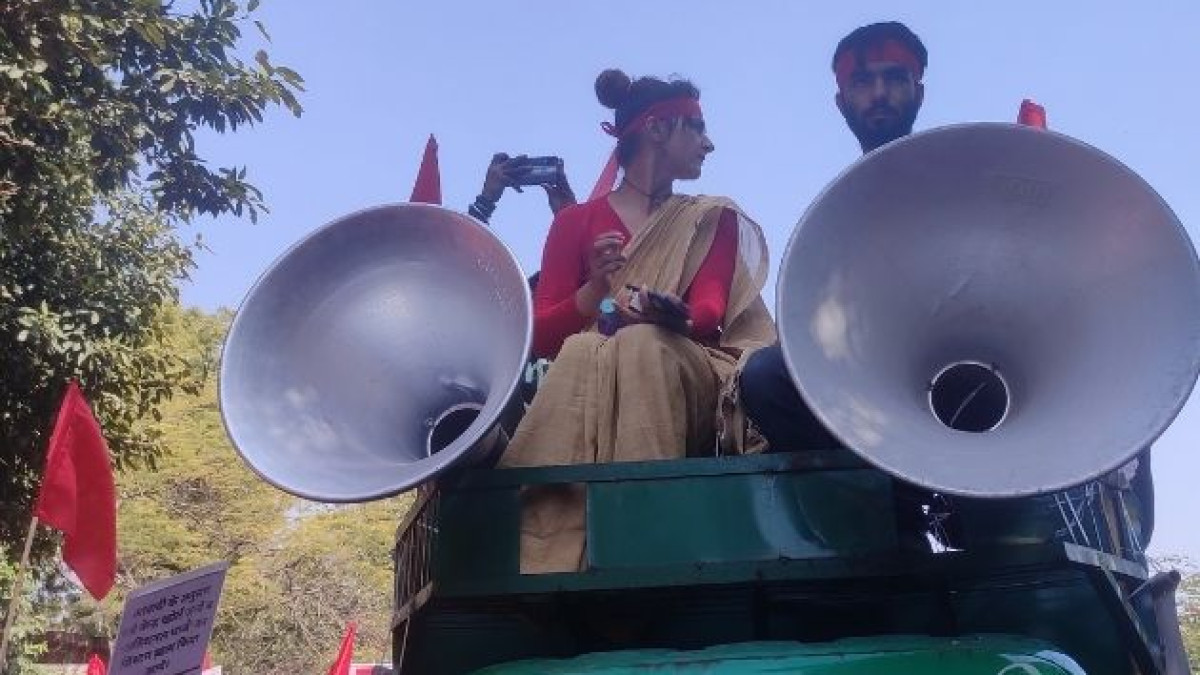 Shivani and another co-worker sitting on top of a vehicle at the protest site on February 11, 2022. (Credit: Shreya Basak)

In September 2021, the Delhi Anganwadi workers had staged another protest demanding adequate honorarium and release of arrears. The Delhi ministry had assured them that their demands would be made, but that too went in vain.

To date, the workers reiterate that the promise made by Prime Minister Narendra Modi in 2018 to increase the wages of Anganwadi and Asha workers have not been met till now.