The observations made by the Allahabad High Court in its bail order contradict the conclusion drawn by the Supreme Court-appointed SIT which had described the Lakhimpur Kheri incident as a clear conspiracy.

“Indubitably, no firearm injury has been found on the body of the deceased or any other person, except the injury of the hitting from the vehicle. Furthermore, in case, the story of the prosecution is accepted, thousands of protesters gathered at the place of incident and there might be a possibility that the driver tried to speed up the vehicle to save himself, on account of which, the incident had taken place,” Justice Rajeev Singh noted in his order while granting bail to Ashish Mishra. “While considering the overall facts of the case, this Court cannot shut its eyes to the killing of three persons sitting in the Thar vehicle, including the driver, who was killed by the protesters.”

Allegedly, Mishra was driving the SUV that ran over four farmers at Lakhimpur Kheri during a farmers’ protest march against three controversial farm laws, on October 3. The first information report registered by the Uttar Pradesh police the next day named Ashish Mishra as an accused besides “15-20 unknown persons.” But he was arrested five days after the incident.

Several viral videos of the incident had shown an SUV ramming peacefully protesting farmers and crushing them without breaking speed. In the retaliatory violence, four others, including two BJP workers, were allegedly killed by the infuriated mob. 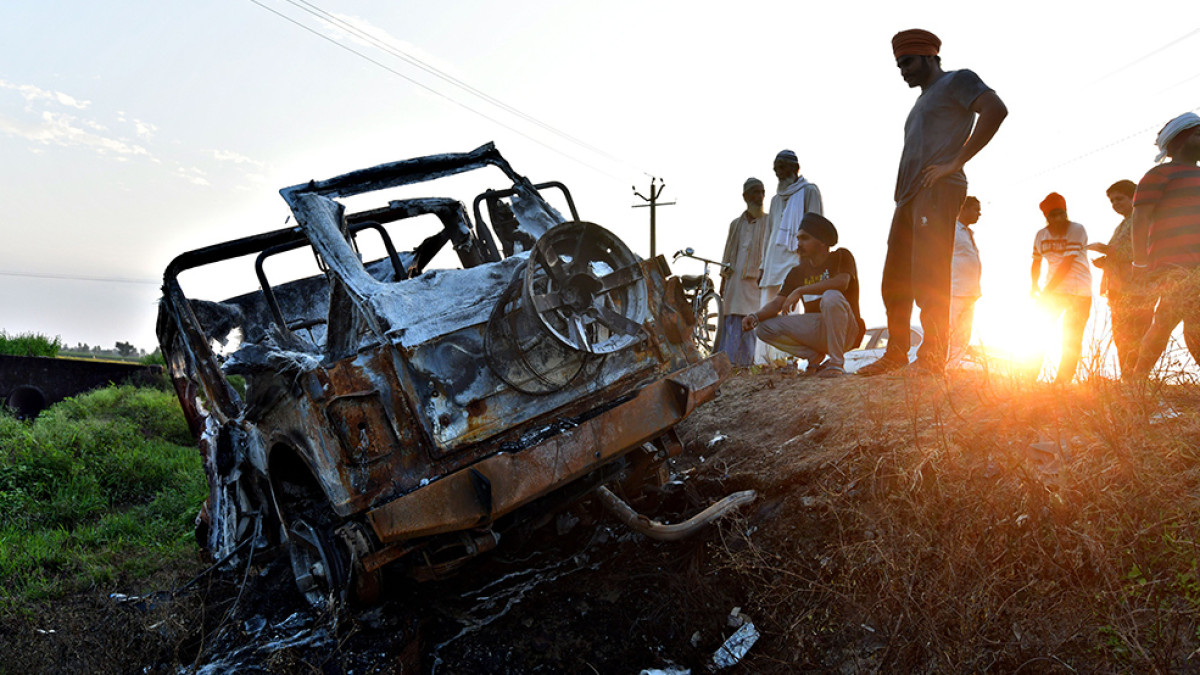 Arguing for Mishra, senior counsel GD Chaturvedi asserted that there was no evidence on the record that proved that the driver mowed down the farmers on the orders of Mishra.

Mishra in his bail plea had argued that he was not in his car at the time of the incident, claiming he was attending a Dangal in a village about 4 kilometers from the place of the incident. But at the same time, he has also asserted that he had a right to self-defence under section 97/103 of IPC if the prosecution's story was assumed to be true.

Pertinently, a special investigation team (SIT) appointed by the Supreme Court had concluded that the incident was not an accident, but was a clear conspiracy.  The SIT had submitted before the local Chief Judicial Magistrate on December 13 that the violence was a “planned conspiracy” and not a result of criminal negligence as claimed earlier. It had also recommended that the previous penal provisions be replaced with more stringent sections like 307 (attempt to murder), 326 (voluntarily causing injuries by dangerous weapons), 34 (acts by several persons with common intentions) and sections 3/25/30 of the Arms Act.

Sharply reacting to the court order, All India Kisan Sabha (AIKS) said in a statement, “This is extremely unfortunate. The High Court judgement is not only a gross miscarriage of justice but goes against every recognised norm of justice.”

Immediately after the Lakhimpur Kheri massacre, the Samyukta Kisan Morcha and AIKS had called for the instant dismissal from the Cabinet and arrest of the Union Minister of State for Home Affairs Ajay Mishra Teni under charges of murder and conspiracy.

"We have full faith in the judiciary. We are going to challenge the bail order in the Supreme Court," Rakesh Tikait, a prominent farmers' leader wrote on Twitter. Earlier, speaking to the media, he alleged that Mishra got bail as he was associated with the central government.

In December last year, the Parliament witnessed several protests by the Opposition leaders, demanding discussion on the Lakhimpur Kheri violence of October 3 — seeking the resignation of the Union Minister of State for Home Ajay Mishra Teni.

“Although over four months have passed after this horrific massacre, Prime Minister Narendra Modi and Home Minister Amit Shah have thrown all political morality to the winds and have retained Ajay Mishra Teni as Union Minister,” said Ashok Dhawale, president of the AIKS. “On top of that comes today's judgement granting bail to Ashish Mishra Teni.”

Billing the BJP as an “anti-people, pro-corporate and authoritarian party”, Dhawale called upon the farmers and the people of Uttar Pradesh, Uttarakhand, Punjab, Goa and Manipur to redouble their determination and efforts to resoundingly defeat the party in the ensuing state assembly elections.

Recently, the collective leadership of the SKM that spearheaded the year long farmers’ movement last year, announced it would campaign against the BJP in Uttar Pradesh and Uttarakhand. It had accused the Narendra Modi government of backtracking on the assurances given to the organization in its letter of December 9, 2021, on the basis of which the farmers had been suspended their agitation.