From Kangana Ranaut To Kamal Haasan: Seven Celebrities Who Commented On The Karnataka Hijab Controversy

On December 31, girls of the Government PU College protested about not being allowed to attend classes for the past 15 days on account of wearing a Hijab to the college.

A series controversy and debate spiralled up across the country in December 2021 when a group of six Muslim girls were barred from entering a pre-university college in Karnataka’s Udupi district. A series of protests and comments followed the communally sensitive issue. The debate over whether educational institutions can impose strict dress codes that may infringe on students' rights spread to other colleges in the state.

On December 31, girls of the Government PU College protested about not being allowed to attend classes for the past 15 days on accounts of wearing Hijab (religious scarf in Islam) to the college. The development committee of the college, in a meeting with the students, requested them to follow the dress code of the college. However, the girls decided to refrain from attending the college and filed a writ petition in the Karnataka High Court and approached the National Human Rights Commission.

The matter escalated to other state colleges when a group of boys in Mukundapur’s Government PU College went sporting orange scarfs to the college in protest against some girls attending the classes wearing Hijab.

The MLA of Mukundapur, Halady Srinivas Shetty, held a meeting with parents and students requesting them to comply with the college’s dress code till any decision was taken on the matter by the government.

The row took a different turn when a group of boys of I.D.S.G Government College in Chikmagalur turned up in the college premise adorning blue scarves and narrating slogans of ‘Jai Bhim’ in support of Muslim girls wearing Hijab.

The Karnataka government has appealed to all the students to follow the college dress code till the time a decision is taken by the state High Court. The state Chief Minister, Basavaraj Bommai, had earlier declared a three-day closure, starting from February 9, for all schools and colleges across the state.

The matter has taken a political angle with parties commenting against each other. The question in hand is the matter of religious freedom in the country and how far it can be exercised. Many Bollywood celebrities too commented on the issue expressing their viewpoints.

Will Take Up Hijab Matter At 'Appropriate Time': Supreme Court

Sharing a post on Facebook, Kangana Ranaut wrote about her views on the issue, "This is Iraq, in less than 50 years it has turned from bikinis to burkha, if u want to show courage show it by not wearing burkha in Afghanistan, learn to break free don’t cage yourself, India is a blessing enjoy your freedom, don’t try to turn it also into a nightmare please.” Her comment received a lash from actress Shabana Azmi.

Richa Chadha had commented on the issue, "Raise your sons better! A bunch of ugly, cowards attacking a lone woman in a pack and feeling proud of it? WHAT LOSERS! Shameful. They'll be jobless, more frustrated and penniless in a few years. What poor upbringing! No sympathy, no redemption for them (sic)."

Actress-politician, Hema Malini, in conversation with ANI said that schools are for education and that religious matters should not be discussed there. She went on to say that every school has a dress code that should be followed. She even said that outside of school, you can wear whatever you want.

Actress Sonam Kapoor Ahuja took notice of the ongoing unrest in the state of Karnataka over whether students should be allowed to wear hijab in educational institutions. She took to Instagram to share a photo of a man wearing a turban and a woman wearing a hijab, with the caption "Why can a turban be a choice but a hijab can't." 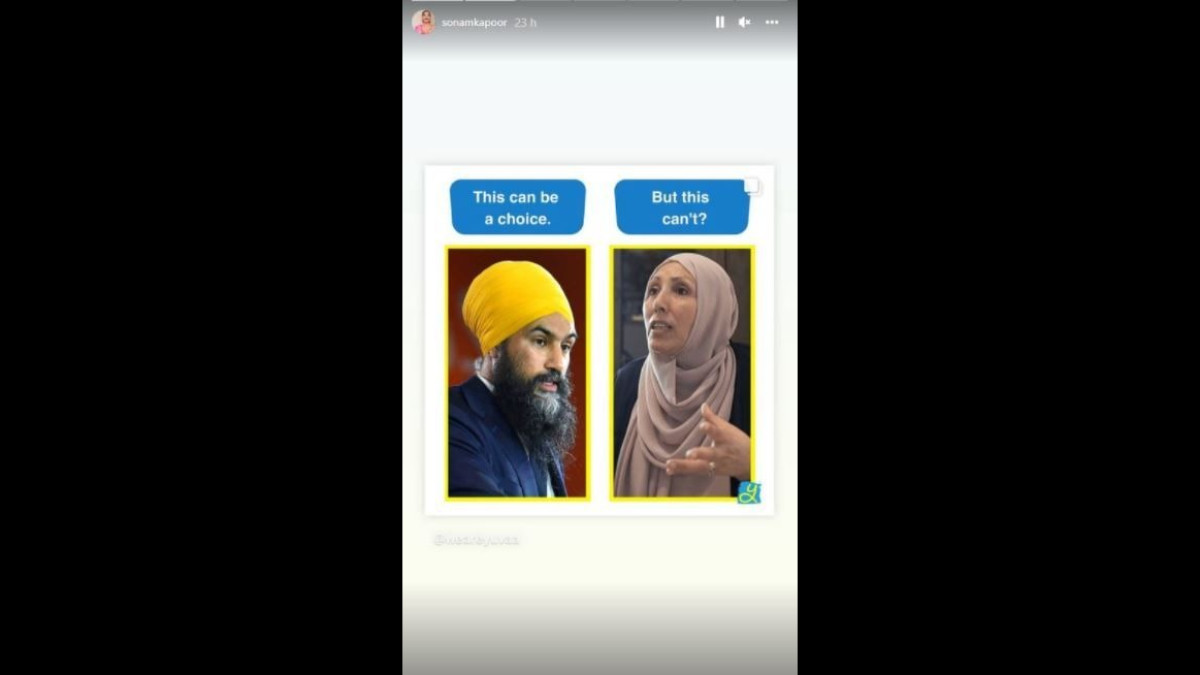 Lyricist and screenwriter, Javed Akhtar, who is known for coming upfront with his opinions too commented on the issue on Twitter.

I have never been in favour of Hijab or Burqa. I still stand by that but at the same time I have nothing but deep contempt for these mobs of hooligans who are trying to intimidate a small group of girls and that too unsuccessfully. Is this their idea of “MANLINESS” . What a pity

In another tweet replying to a Twitter user, Akhtar wrote, "Secular people like me have the right to oppose burqa n hijab (we have always done that) but not those who themselves have saffron shawls on their shoulders. Aren’t they of the same ideology that caused violence against Hindu girls in Mangalore for having coffee in a restaurant."

Actor turned politician, Kamal Haasan, on February 9 took to his Twitter page to express his views on the hIjab row in Karnataka. He tweeted in regional language which read, “What’s happening in Karnataka is causing me distress. A poisonous wall of communalism is being raised among innocent students. What’s happening in our neighbouring state should not come to Tamil Nadu. It is time for all progressive forces to be more vigilant than before.”