The Rohit Sharma-led India scripted a double whitewash against West Indies on Sunday at Eden Gardens. The hosts won both the ODIs and T20s with similar 3-0 margins.

Harshal Patel, Venkatesh Iyer, Shardul Thakur and Deepak Chahar shared nine wickets between them after Suryakumar Yadav’s brutal 31-ball 65 as India beat West Indies by 17 runs to complete a 3-0 whitewash in the T20 series at the Eden Gardens on Sunday.

Chasing 185 to win, West Indies were in the game as long as Nicholas Pooran was in the middle. But his dismissal for a 47-ball 61 in the 18th over sealed the encounter for Men in Blue in a half-packed Eden Gardens.

Chahar removed both the openers Kyle Mayers and Shai Hope for single digits before Rovman Powell joined hands with Pooran for a 47-run stand to steady the Caribbean ship. Powell, whose unbeaten 68 nearly won West Indies the second T20 on Friday, failed to capitalise on his start before falling for 14-ball 25.

Venkatesh removed big-hitting Pollard and Jason Holder to break the West Indian backbone. Fabian Allen tried his best with a 21-ball 29 but that wasn’t enough as West Indies could only manage 167/9. With this win, India completed series sweep over West Indies in both the ODIs and T20s.

Unlike the previous game where India dropped as many as two catches, Rohit Sharma’s men showed a much-improved show on the field. The one-handed catch by Rohit Sharma to dismiss Dominic Drakes in the final over of the game was a treat to watch.

Patel finished with 3 for 22 while Venkatesh (2/23), Chahar (2/15) and Thakur (2/33) took wickets apiece. Young leg-spinner Ravi Bishnoi, who had impressed in the first two matches, went wicketless in his four overs conceding 29 runs. Debutant Avesh Khan was the costliest with 42 runs in his four overs. 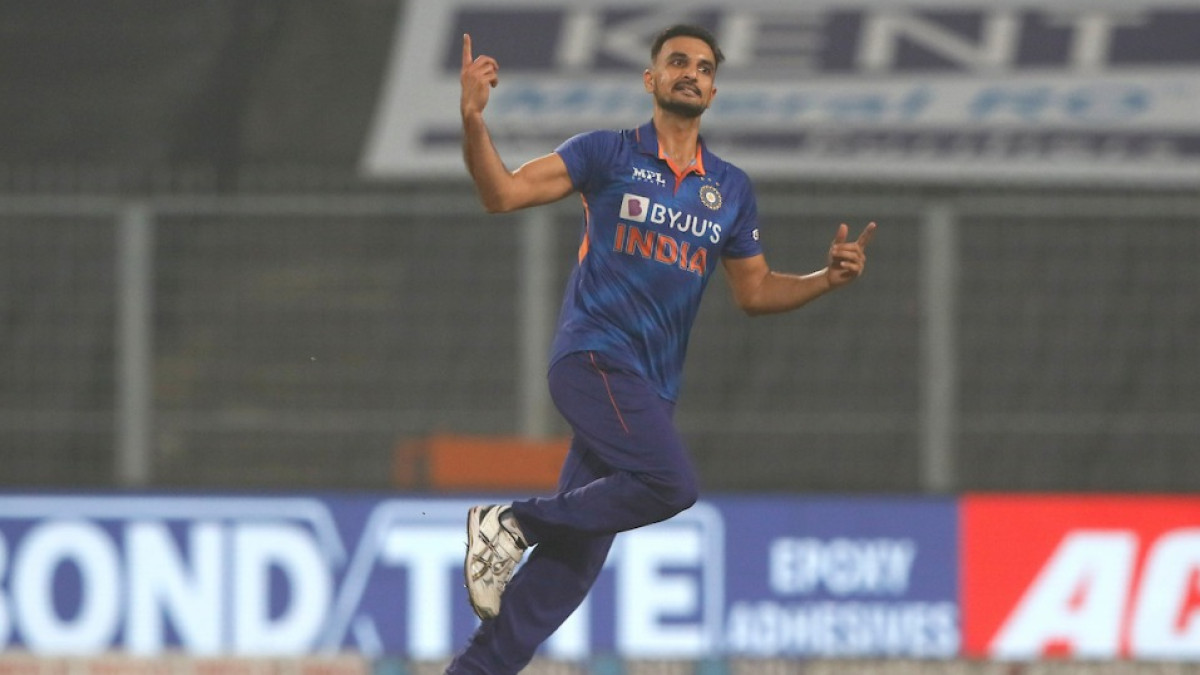 Harshal Patel celebrateds one of his three wickets against the West Indies in the 3rd T20 against West Indies on Sunday at Eden Gardens. (Photo: BCCI)

Earlier, Suryakumar Yadav and Venkatesh Iyer unleashed their brutal self with a 91-run fifth-wicket stand to power India to a challenging 184/5 in 20 overs. The duo came together in the 14th over and hit a combined five fours and nine sixes to take the game away from West Indies.

Suryakumar, in particular, was most brutal as he hit three sixes in the final over against Dominic Shepherd before being out on the last ball for a 31-ball 65. Venkatesh Iyer, who played a crucial cameo in the last match, was at his best in this match too.

The left-hander remained unbeaten on 19-ball 35 that was studded with four fours and a six. In the last five overs India scored 86 runs.

It was a new-look Indian batting order on display with Ishan Kishan opening the batting with Ruturaj Gaikwad, while Shreyas Iyer batted at No 3, and skipper Rohit Sharma dropped him down the order at No 4.

Opening the batting Gaikwad was out cheaply for just four while Shreyas was unable to capitalise on the start and was dismissed for 16-ball 25. Ishan Kishan played a much slower innings with 35 off 31 balls that included five fours.

India will next play a three-match T20 series against Sri Lanka starting with the first game in Lucknow on February 24. They are expected to fly out of the city on a chartered flight on Monday.