More from Outlook Bureau
View All

The ongoing Adivasi protests in Bastar have taken a new turn with the alleged detention of several leaders of Mulwasi Bachao Manch, an organisation formed after the killing of Adivasis in Silger, Sukma, last May. These leaders were going from Bastar to the capital Raipur to meet the Governor last week when nine of them were allegedly detained in Kondagaon district and brought to Sukma.

Demanding their immediate release, the Manch soon issued a statement that “it is a conspiracy to falsely implicate these leaders under various cases”.

However, Bastar IG P Sundar Raj said that these leaders broke the covid protocol that was enforced following the increase in cases in the first week of January. “They were asked to disperse their gathering as Section 144 of CrPC had been invoked in the areas they were holding the protests. But they ignored all the safety protocols," he said.

"Nine persons belonging to one such Adivasi group was brought for recording their statement. Four tested positive,” the IG said, adding that “they have not been arrested, nor kept in detention.”

Of the four who tested positive; Manch’s president Raghu Midiyami is from Sukma district, whereas Sunita Pataam, Rajendra Mandavi and Anjali Mandavi are Bijapur residents. They are currently admitted at Sukma’s district hospital.

“The remaining five, who tested negative, were allowed to leave on January 22 and asked to remain in home isolation for a week,” said Sundar Raj. After they complete their quarantine period, they will be presented before a magistrate for violating the curfew.

However, it is still not clear that while these Adivasis had been holding protests in various parts of in interior villages of south Bastar, why they were held several hundred kilometres towards the north in Kondagaon. If the issue was of breaking the covid protocol, they should have been held at the protest sites and not when they were travelling to Raipur.

Chhattisgarh: Naxals Kill Man At Kanker Village; Accuse Him Of Being Police Informer 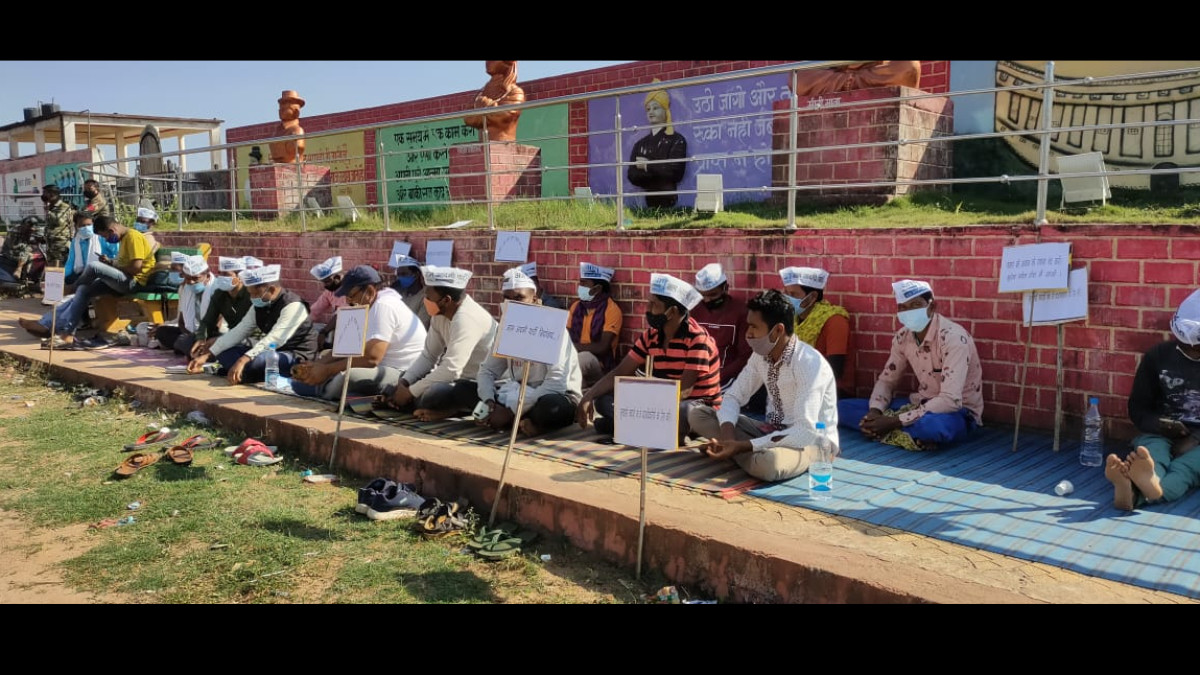 AAP members on a dharna against the 'detention' of Adivasis in Kanker on Saturday. (Credit: Rohit Kaimro)

On May 17 last year, three persons — Kawasi Wagha, Korsa Bhima and Uika Pandu — had died after the police had opened fire on Adivasis protesting the opening of a new police camp in Silger village of Sukma. Poonam Someli, a pregnant woman who was injured during the stampede following the firing, died a few days later. Soon the protests took a massive turn as Adivasis from distant villages marched to Silger.

As the Silger protests intensified, some young Adivasis formed Mulwasi Bachao Manch and took their movement to various other parts of Bastar. They received quick support from the local population and mobilised large gatherings at different places. There've been regular Adivasi protests against the police excesses in the Naxal-affected Bastar, but the scale and the magnitude and speed of the ongoing movement have left both the administration and the police surprised. The seven districts of the Adivasi zone of Bastar, most of which is forested, form an area bigger than Kerala.

The main demands of the Manch include the removal of police camps from Bastar, allowing mining rights to be with natives, fresh enquiry of various fake encounters in Bastar and registration of cases against the guilty policemen. Among the places they are holding protests in a zone bigger than Kerala include Singaram (Sukma), Elmagunda (Sukma), Gompad (Sukma), Pusnar (Bijapur), Dharamaram (Bijapur), Naodi (Dantewada), Desa Ghati (Narayanpur).

“We have spread across Bastar, we have units at several blocks, we have committees at block and district level. We are holding protests all over Bastar.” Azad Musaki, a Manch leader said.