A Walk On Asia's Largest Freshwater Lake In J&K

The lake looks like a huge land surface having some freshwater streams here and there. In these streams, shikaras move in lanes making them highways of sorts within the lake.

From its shoreline, Wular Lake is soothing to the eyes. It is breathtakingly beautiful. The vast and expansive lake, surrounded by snowclad mountain peaks, looks full of water currents crisscrossing in intricate patterns. A number of fishermen and women in dozens of boats are fishing on one side of the lake closer to the shore. They beat drums apparently to push fish one side before laying their nets. You feel it is the season of festivity within the waterbody. But half an hour deep inside the water body, you find the lake turning into small water streams in the middle of a huge siltation field.

If it will remain in the same situation for the next few years, we can have cricket ground in the middle of the lake, says 19-year-boatman Aamir Ahmad Dar with a smile on his face. Dar, after rowing his boat 2 km inside the waterbody, touched accumulated silt, making it difficult for his boat to navigate. He shouted at another shikarawalla and asked him the way out from silted water. He showed him a way warning him to avoid the silted area. After paddling shikara to some distance, it reaches to 12 ft water path. On both sides of the waterway are vast stretches of the ground made of silt, with people walking around it. Like in the agriculture fields, fishermen were levelling, smoothing and shaping and marking the surface of the lake and then making inlets for water supply into it for water chestnut extraction.

The lake looks like a huge land surface having some freshwater streams here and there. In these streams, shikaras move in lanes making them highways of sorts within the lake. 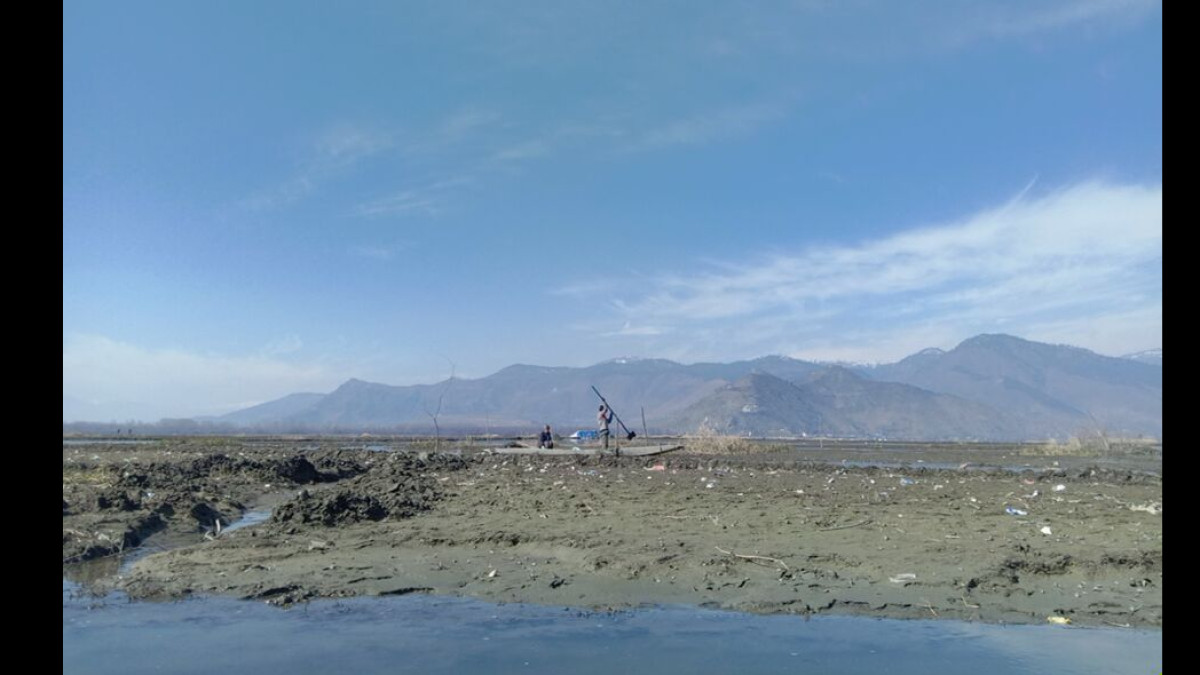 'Why Is China Ramping Up Infra Near Ladakh?' Pangong Lake Bridge Raises Concerns In Chushul

Baba says around ten years ago siltation of the lake was not as limitless as it is at the present. “I feel every year the siltation area grows by kilometres,” he says. He says chestnut extraction is a hard job on silted surfaces. “It consumes more time and you extract very less quantity of water chestnuts. In running water, extraction of chestnuts is an easy job,” he adds. 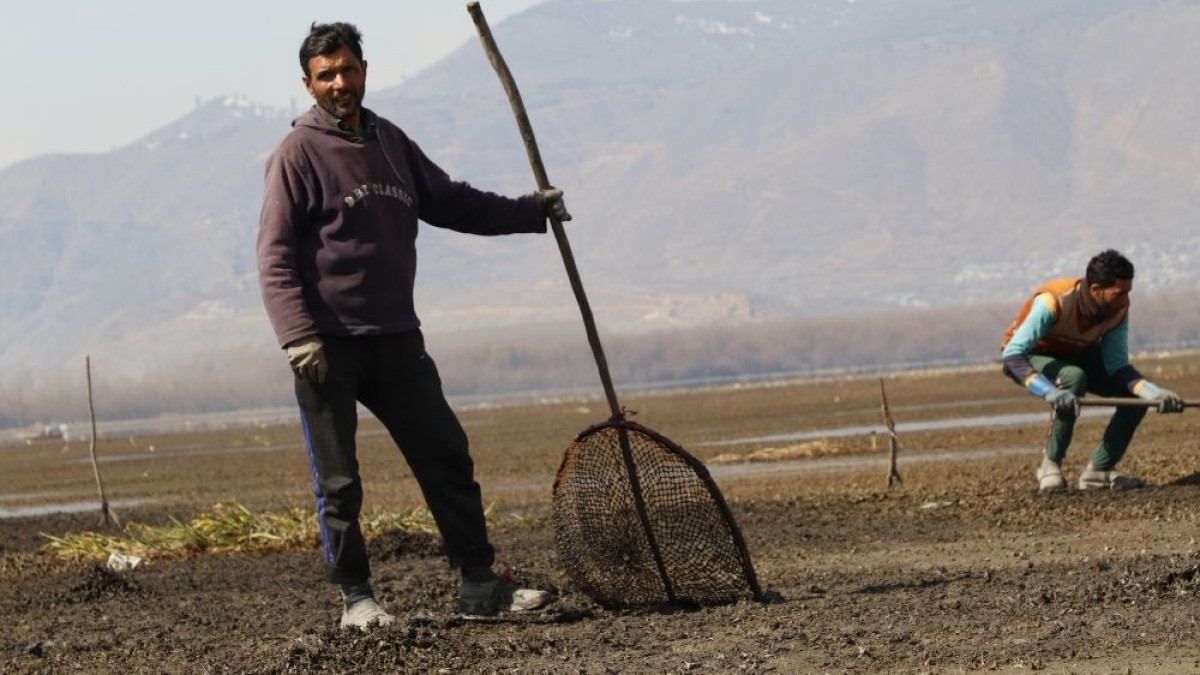 In the lake, there is four months season for chestnut harvesting from November 15 to February 28.

Abdul Rashid, 65, says the siltation area in the lake increased during the past two decades. He says he had been extracting water chestnuts for the past five decades but it is only in the past two decades the siltation area is growing. But he says it shouldn’t be a matter of concern. “It will take another 200 years for this type of siltation to cover the lake. I don’t think it is much of an issue. The basic issue is water chestnut extraction licences. The licence should be made free and it should be valid throughout the year,” he says paddling his shikara from the waterway.

However, many in the young generation like Dar don’t share elderly man’s optimism. “The vast siltation fields on the lake look scary,” says Dar.

Some officials of the Wular Conservation & Management Authority (WUCMA) also see the vast siltation filled lake as a non-issue. A senior official of the WUCMA says the lake is spanning over an area of 130 sq. km. The whole area, he says, is properly demarcated and only 27 sq. km is critically silted. “Wetland is not a swimming pool. The siltation is also important and above all silt is the main constituent of the water body,” says the official pleading anonymity.

He says since WUCMA was formed a few years ago, the authority has done geo-tagging of 130 sq km, demarcating the whole wetland. “I think that is a feat in itself that should be acknowledged instead of laying whole focus on siltation and felling of willow trees,” he adds. In spite of such voices, the government is not taking the growing siltation of 27 sq. km lightly.

Once upon a time, lake originally, according to a 2007 study of conservation group Wetlands International, covered an area of nearly 218 square kilometres (84 square miles), including 58 sq km of marshland. It shrank in size by 45 per cent over a century as it was drained for agriculture and willow plantations. 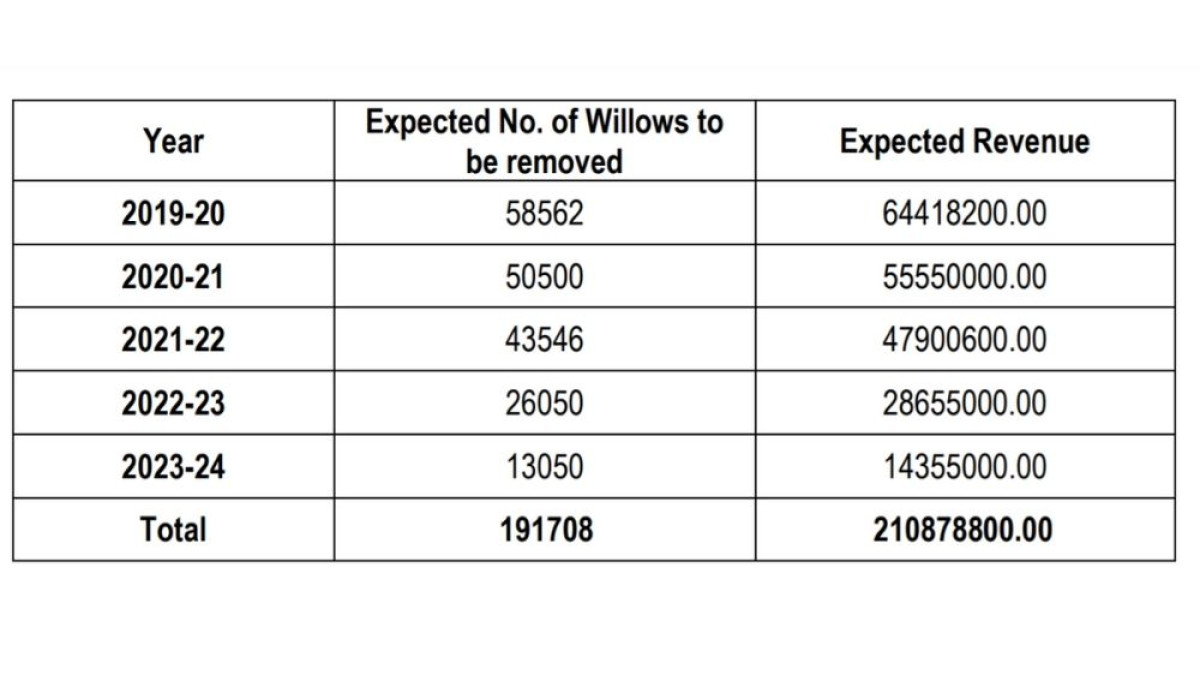 Another study of 2016 by Wetlands International says widespread reclamation and drainage of the lake and its marshes for agriculture, settlements and plantations contributed to shrinkage of the lake area and degradation of the natural resources it provides to wetland-dependent communities.

“During 1911-2008, the overall water spread and marsh areas shrunk by over half, reducing one-fifth of the area’s water storage capacity. Floods and droughts have increased as the water regulation capacity of the wetland have been diminished both due to shrinkage in the area as well as loss in water-holding capacity. This has increased the risk of floods and drought for both local and downstream communities,” the report reads.

A WUCMA report named, “Action Plan for Removal of Willows from Wular Lake”  says willow plantation has severely altered the hydrological processes of Wular lake. It says willow plantations act as barriers to silt-laden waters of the river Jhelum forcing it to discharge the sediment load into the lake and thereby inducing loss of water holding capacity.”

“A spatial analysis of the sedimentation pattern within the wetland clearly indicates rapid siltation along the fringes of the plantation areas. The detritus from the plantations have also accelerated nutrient enrichment of the waterbody leading to water quality deterioration.”

“The project is near completion and 3.10 sq km has been restored and 63 lakhs cubic metres of silt removed restoring the carrying capacity of the lake,” says an official. The official says the WUCMA will be issuing another tender for dredging and removing silt from the lake.

There are an estimated number of 21.50 lakh willow trees within the Wular lake covering an area of 27.30 sq km. This is as per a survey done in 2007 assessed using remote sensing imageries. The estimation of the number of willow trees is based on an assumption of an average plantation density of 1000 trees per ha. The government expects to earn around Rs Rs. 228 crores on the sale of these willows. In the past year around one lakh, willows were felled.

While the government is spending most of the funds on dredging as siltation in the lake is seen as a major concern, the government is also roping the National Institute of Hydrology for Wular conservation. The NIH will see whether siltation is really an issue. The NIH will be carrying out a comprehensive study of lake hydrology, radioisotopic studies to provide a clear roadmap about the historical siltation patterns of the lake. “That will show us whether siltation really is a problem or not,” says an official.

The lake has reduced from about 158 sq km in 1911 to 87 sq km in 2007. How? There are no concrete answers. But from the shoreline, especially from the hillock near Watlab, Wular Lake looks enchanting and serene. One prefers to stay here for long to watch it for hours. That is what people are doing: viewing the lake from the shoreline.