Married at 12, widowed in her 30s and separated from her sons, Bundi Devi could be the last person at Umreth village, high up in the Garhwal hills.

“I don’t see a human face or hear a human voice for days or even months. I talk to myself or the stars. When I’m sick or ailing, I look up at the sky and talk to God. He listens to me and cures me. I have no hope left from living beings. They are just aliens to me.”

This is Bundi Devi, the Dadi of Umreth, one of Uttarakhand’s many ghost villages. She could be the last inhabitant of her village. Her husband died 50 years back, but she brought up her two sons single-handedly, got them educated. Both are now employed in different towns of Uttarakhand, where they live with their own families. The entire village, which used to have six to seven families, is deserted. Across the hilly state, there are officially 1,564 ghost villages that are uninhibited, and 650 others with less than 50 per cent population.


Devi, around 82 years old, lives alone. Her house has three small rooms, but two of them are in ruins and unusable. Her existence is limited to a single room of the dilapidated house with walls crumbling, plaster peeling, doors cracking and roof exposed to fallen dry leaves and broken branches of the trees, and forests around her house. As the roof of her room often leaks during rains, she has got it covered with a long plastic sheet.

Her room—which has an old cot and also doubles as her kitchen, is blackened with soot from the firewood oven she uses to cook her meals. There is a small window in the front but no ventilation, as she fears reptiles will creep in. She has put a cord with dry leaves fixed to it on the door, believing this will ward off all evil spirits.

Wild animals roam around the house during the daytime, but she doesn’t confront them. They quietly make their move after resting in the abandoned commons, she says.

Migration of people from villages in Uttarakhand leads to ghost villages

Her house could be easily spotted from the other end of the nearby village, which is the last motorable point. There are more than two dozen other scattered villages in the hilly belt, half of these without inhabitants. There is no road, only a treacherous footpath.

She occasionally laughs while talking, feeling enthralled at receiving a visitor. Then, just as suddenly, she breaks into uncontrollable tears as emotions overflow while she recalls her plight, which she knows is not going to improve as she grows older and her eyesight fails. There is no medical resource at hand, nor anyone who can take her for a health or eye check-up.

Moments later, she showers blessings on this reporter for coming to visit her. “I’ll be dead before you come next time. Nobody visits me. It’s natural, given how difficult it is to reach this village,” she says.

She’s not wrong. To reach there, one has to travel through a forest, climb a rugged mountainside overgrown with wild shrubs and bushes, and even cross a glacier-fed river—Jakha, a tributary of the Ganga. 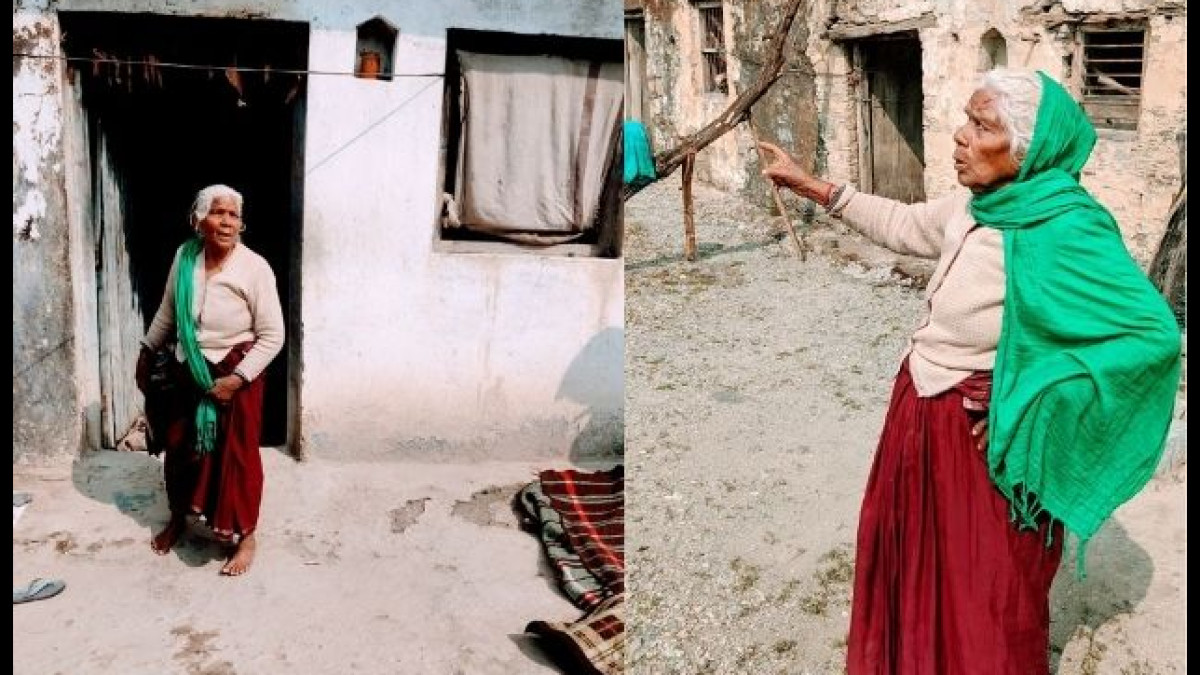 Only some years ago, former Uttarakhand Chief Minister Trivendra Singh Rawat inaugurated his dream tourism project—Suryadhar Lake, just a few kilometres downstream on the Jakha. It now looks like Rs60 crore of public money has washed down the drain, as the project has failed to take off.

Had he spent half the amount to build link roads, set-up irrigation facilities, open schools and made arrangements for jobs to bring back the families of locals like Bundi Devi, he would have been remembered for generations, feels Mohit Uniyal, a young social activist working on livelihood and migration issues.

There are hundreds of ghost villages in Uttarakhand. Men and women have left the remote and inaccessible stretches surrounded by rugged jungles to seek better lives for themselves elsewhere.

Says Rajesh Pandey, a Dehradun journalist who visited Devi six months ago, “Dadi is a living legend in Dehradun district. When I visited her, she brought the cot out of the room all by herself to receive me, while she sat on the ground to narrate her painful story. She even offered to cook something for me. I believe there are such sad stories in most ghost villages of Uttarakhand. If not the government, some local groups or panchayats should help them out to somehow end their loneliness. It’s awful.”

The other village this reporter visited—Sabhuwala—3-4 km from Umreth, is connected by a small bridge laid over the Jakhan river. There are only three families left, despite huge cultivable land with a minor irrigation scheme commissioned long back during the time when Uttarakhand was part of Uttar Pradesh.

When asked if she isn’t afraid of ghosts, she reacts furiously. “Am I not human? Of course, I am afraid. All those dead bodies that were cremated on the river bank keep frequenting their deserted homes. But I’m protected by God and can deal with those fears.”

Bundi Devi says she has seen leopards, snakes and other wild animals in front of her house even during the daytime. When the sun goes down and it’s dark, she closes her door.

Her son, who lives in Rishikesh, visits her once in three months with rations and other essentials, including groceries, packets of instant noodles which she likes, and biscuits. She stores everything in an old steel trunk next to her cot. She doesn’t own a cellphone, radio or TV. In case of emergency, she walks down to the nearest village—where locals help her make a call to her son, who organises help. Of course, that is a rare event.

How does she know the time, as she doesn’t have a wall clock or watch? Bundi Devi smiles. “Stars tell me the time. During the day, I look at shadows of trees.”

Bundi Devi’s personal story is also quite heart-rending. She got married at the age of 12 to Gyan Dass, for whom it was his second marriage. They had two sons but her husband died when she was in her 30s. Thereafter, she brought up both sons on her own.

When they grew up and moved out, Bundi Devi chose to remain in the village. But gradually, the rest of her neighbours deserted the village, leaving her all alone. She is mentally agile. Gets up early to sweep her room and a small lawn in front of her house. There is a drinking water supply to her house. She takes a bath and goes to the temple barely 50 m away, to offer puja.

“I cook and eat only once a day. With age, I don’t do much work. Earlier, I used to grow cereals, and have planted a few mango trees and a guava tree. Next time you come, I’ll get some fruits for you,” she says. 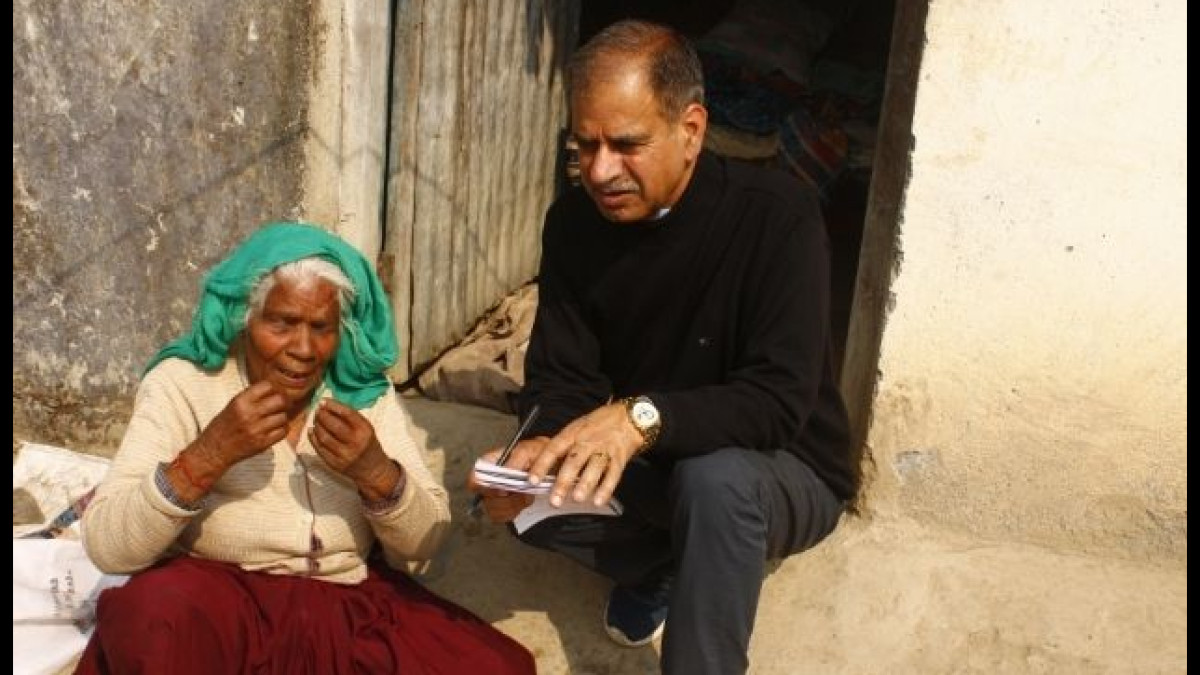 Thankfully, she says, she had her Aadhar card made, through which she gets a regular old-age pension of Rs 1,200 per month, which goes directly to her bank account. She proudly shows her PNB passbook with a balance of over Rs 10,000.

“I don’t need money, I have told the local gram pradhan who came asking for votes. Instead, I said the government should repair or rebuild my house before it collapses,” she says.

She did not go to vote in the state assembly polls held on February 14.

“Why should I vote? What has the government or MLA done for me? I was born before Independence and still continue to live an era of deprivation, dejection and poverty. When my own has left me to live this pitiable life, who else will offer me support,” says Bundi Devi, as her voice chokes with emotions.

As per the report of the Uttarakhand government’s Migration Commission, set up in 2018, there are 6-7 hill districts of Garhwal that have reported the highest migration during the past 10 years. And the process hasn’t stopped.

Mohit Uniyal claims most of these elderly people in the abandoned villages want someone to talk to them and attend to their health issues. “The government must work out an action plan quickly. Most facts about migration have been documented. It’s time to act on the report,” he says.