50 Years Of Arunachal Pradesh: Glimpses Of The Celebrations

The month-long festivities celebrations surrounding 50 years of Arunachal Pradesh's existence concluded in Itanagar on the occasion of the state's 36th Statehood Day on February 20, 2022, with cultural events galore and a special theatrical performance

More from Ot Staff
View All

An array of sights and sounds filled the air as Arunachal Pradesh celebrated its 36th Statehood Day on Sunday (February 20, 2022). The celebrations also coincided with the culmination of the month-long festivities marking 50 years since it was renamed from the erstwhile North-East Frontier Agency (NEFA).

While the celebrations kicked-off a month ago on January 20 at Ziro, the place where the official change from NEFA to Arunachal Pradesh was announced, it formally ended a month later at a brand new stadium built near the state capital Itanagar at Yupia in Papum Pare district.

Whether planned as such or not, the celebrations adhered to the official themes—‘Celebrating Past' and 'Nurturing Future’. However, it wasn’t just the events of the inaugural and final days that were centred around the themes.

The original plan was to hold a number of events involving travelling bands of artists and cultural troupes who were supposed to travel across the five first districts of Arunachal Pradesh—Kameng, Subansiri, Siang, Lohit and Tirap. But, with the rising number of COVID-19 cases, the organisers had to scrape the original plans and cancel the roving aspect of the celebrations. Ultimately, the inaugural ceremony was held at Ziro, while the closing events were held in and around Itanagar, although Sunday did witness celebrations across the 26 districts that comprise the state presently.

At the Golden Jubilee Outdoor Stadium at Yupia, cultural troupes of nearly all the 26 major tribes and over 100 smaller tribes performed folk songs and dances that have been part of their culture for ages.The Tapu War Dance of the Adi tribesmen, the muzzle-loaded gunfires of the Wancho and the Yak Dance of the Monpa offered glimpses to the state’s rich and varied cultures that are rooted in traditions. 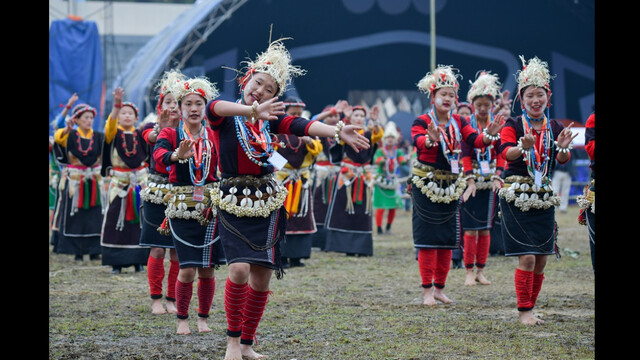 Considering the cultural melting pot that is Arunachal Pradesh, it is no surprise that the indigenous people of the state have to use Assamese, English and Hindi as a language of communication amongst themselves. Little wonder then that the state’s de facto official song is a Hindi song called "Arunachal Hamara" that was penned by the legendary Assamese singer Bhupen Hazarika, who was born here.

As the performances of the tribes concluded, the cultural troupes congregated to dance to the song as it blared from the large speakers at the outdoor amphitheatre. In fact, Prime Minister Narendra Modi even recited a few lines from the song for his recorded message that was telecast at the stadium. And while the massive synchronised dance harked to the days of yore, the people behind the talent show Arunachal Idol brought together singers from the state who later took to the stage to perform an updated rendition of the song. Appearing in the 1977 film Mera Dharam, Meri Maa, directed by Hazarika himself, the film continues to be a fixture at state-sponsored events four decades later.

50 Years of Arunachal Pradesh: A Theatrical Production Shows the Journey of the State From Its Inception

50 Years of Arunachal Pradesh: What The State Has in Store for Its Golden-Jubilee Celebrations

50 Years of Arunachal Pradesh: How the State Inaugurated Its Month-Long, Golden Jubilee Celebrations

The venue where the closing day’s events were held mainly promotes popular, modern-day sports such as cricket and football. But, on Sunday, it also hosted athletes playing ancient, indigenous games, including variations of tug-of-war where, instead of a rope, a bamboo shaft is used. Instead of tugging on it, the shaft is twisted to make the opponent fall over. However, what really got the crowd going was the Apatani sport of Boa Benii, where the participants must attempt to swing as high as they can from a rope tied to a babo, a T-shaped wooden pole. 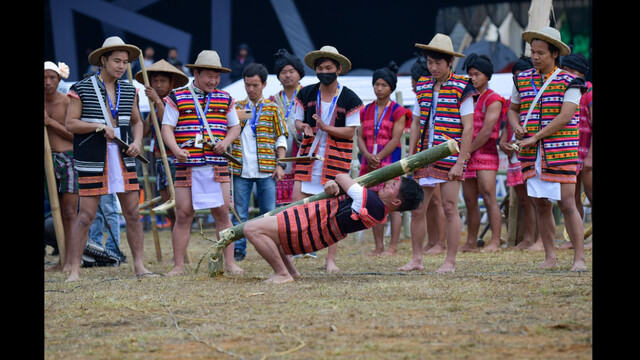 Speaking to the audience, chief minister Pema Khandu spoke of how the government has plans to bring development to the state. He also extended his gratitude to past chief ministers who, he said, had a much more difficult path ahead of them. On Sunday, past chief ministers, living and dead, were honoured, as well as the first set of parliamentarians and legislators of the state. The Statehood Day also witnessed the felicitation of the late Verrier Elwin, the legendary anthropologist who, for years, worked with the indigenous people of the state and was the anthropological advisor to the government of NEFA. The state government also honoured its history by awarding the Arunachal Ratna to the late K. A. A. Raja, the first lieutenant governor of the state. 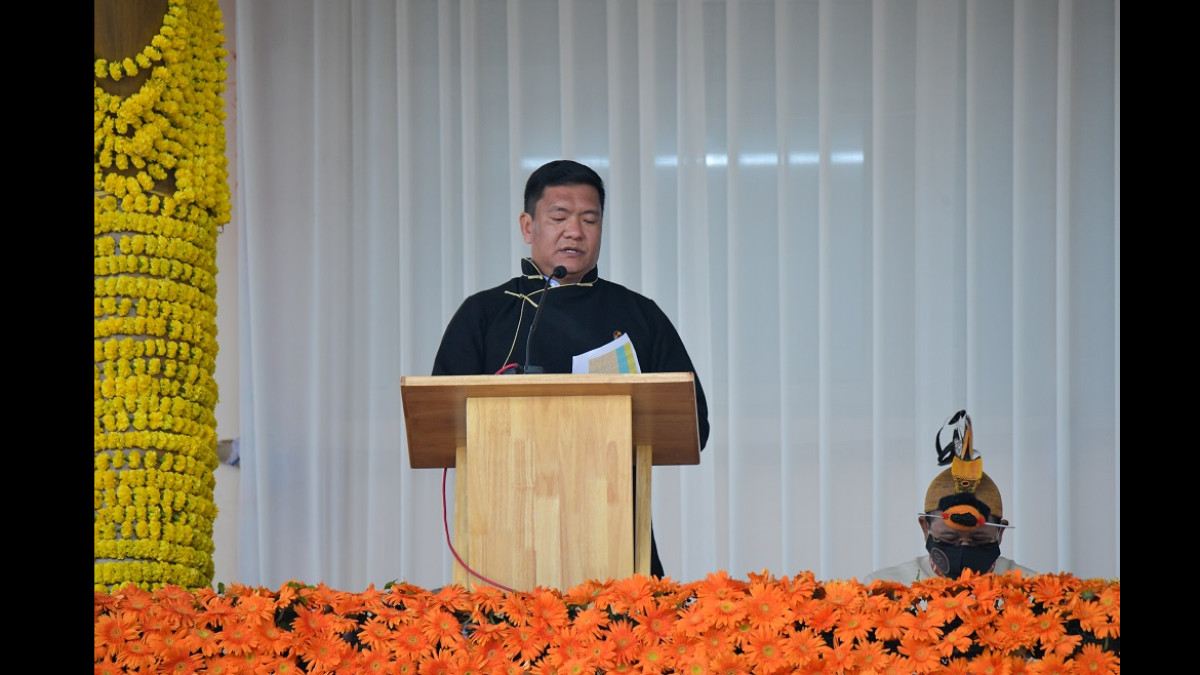 Legislative Assembly speaker and the chairman of the 50 Years of Arunachal Pradesh Celebration Committee, Pasang D. Sona, took inspiration from John F. Kennedy, calling upon the people to ask not what your country can do for you, but what you can do for your country. The Governor of the state, Brigadier (Retired) (Dr) B. D. Mishra, called for the strengthening of value systems, preserving indigenous faith and learning from tribal traditions.

As the formal events winded down by twilight, the stage was lit up for more ‘modern’ performances by artists and groups such as the Arunachal Independent Musicians Forum Collective, Nagaland’s Abdon Mech, Arunachal’s Taba Chake and crooner Jubin Nautiyal. 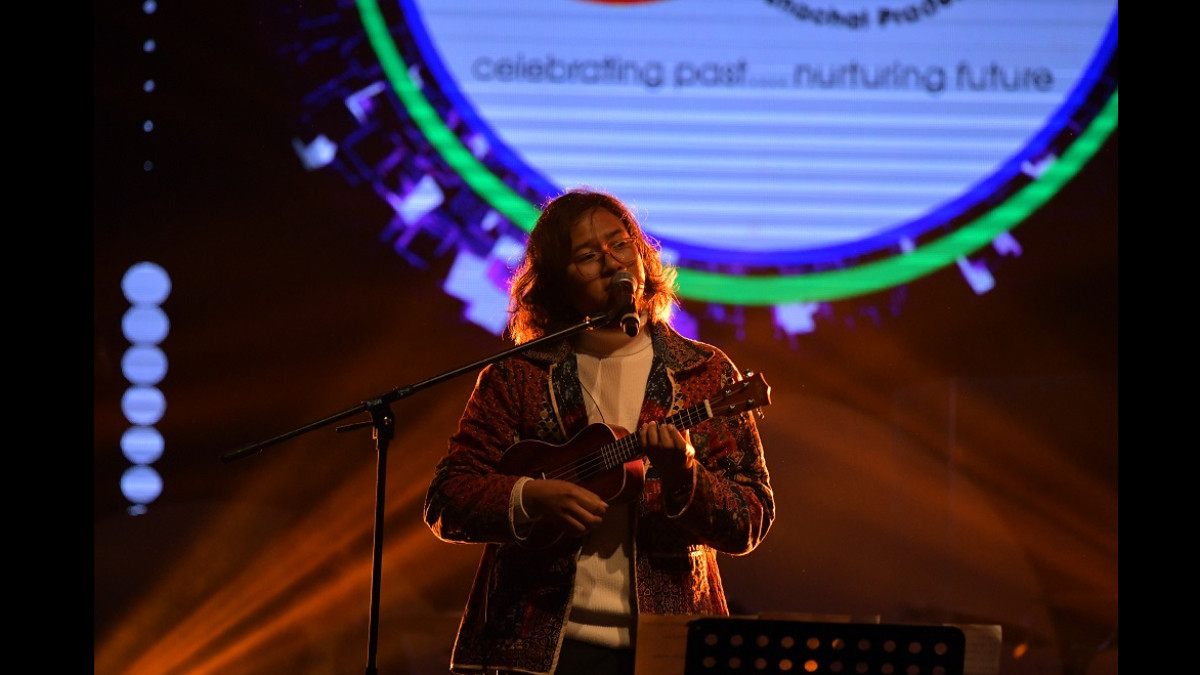 Taba Chake, the popular, independent musician from Arunachal Pradesh, performs during the evening celebrations of the state's 36th Statehood Day

The evening’s audience, mostly made up of the younger demographic, also briefly got a glimpse of actor Sanjay Dutt who was roped in December last year as the brand ambassador for the state. In his characteristic style, Dutt said he was happy to be here. The state government has said that Dutt’s personal struggles with drug abuse was a deciding factor in making him the brand ambassador for its Arunachal Against Substance Abuse campaign that will run throughout the year.

Dutt said that he wanted to see India become drug-free, and that he wants to start that campaign from Arunachal. “Arunachal Pradesh should be drug-free. I don’t want any drugs here. We will start from here and be an example for the rest of India,” he said, adding that the real 'high' is in being with friends, family, and in “this beautiful state”.

In the lead-up to Sunday’s finale, seminars and conclaves covering topics as varied as the state’s history, the effects of climate change and building a sustainable future and workshops on films were held. Award-winning film director Imtiaz Ali, who has directed films like Jab We Met and Rockstar, also spoke to filmmakers from the state during a workshop on the penultimate day.

Ali was also in the audience on February 19 when the play, Arunachal, Ek Safarnama - A Vision Reborn, premiered in the state capital. A relatively unknown art form in the state, theatre productions are a rarity even in urban centres. When the play premiered, audience members could be heard laughing in splits and sniffling as they fought back their tears. Noted writer and Padma Shree-recipient Y. D. Thongchi praised the technical execution of the production, while journalist Indu Chuku said she was left enamoured by it.

The play takes its audience through a journey of the past 50 years through the personification of Arunachal Pradesh and the highs and lows the state has undergone. 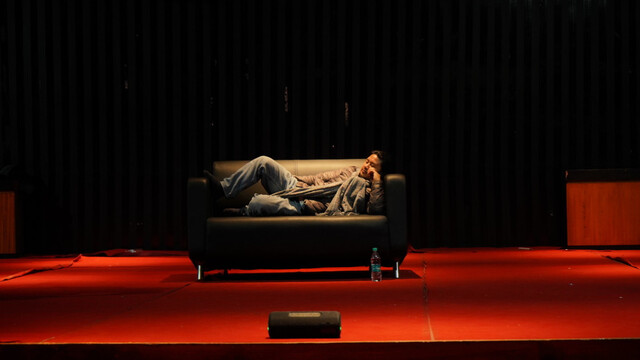 The play promises to embody a contemporary approach

Duyu Tabyo, the play’s scriptwriter, said that efforts were made to “put in elements of how us tribals were introduced to changes in our way of living and towards modernity”.  “Most importantly, we have tried to keep the essence of the ingrown innocence of the tribal populace of our state. The play is about how, through globalisation and inevitable change, we are slowly disintegrating our roots and cultures,” he said. With hardly any formally trained actors, Tabyo said that the production team and the actors improvised a lot.

Director Riken Ngomle, an assistant professor at the National School of Drama (NSD), New Delhi, said that the motive behind the play was retrospection. “The idea was to explore the meaningful connection between the events that have happened before and after the formation of Arunachal Pradesh in 1972. Yes, there has been extensive development because of urbanisation. There is no denying that it all happened for the greater good. The education system has improved, we have better roads and infrastructure now, social evils are starting to disappear, people are breaking out of harsh superstitions and stereotypes,” he said.

“But this development did come with its own share of hurdles and problems. The so-called modern culture is overshadowing our traditional values and leading our historical culture to extinction. Our culture was built on oral traditions. Our folk tales, songs, dances and poetry were not just symbols of celebration but carriers of our philosophies and morals. To abandon them is to abandon our true nature,” Ngomle added. 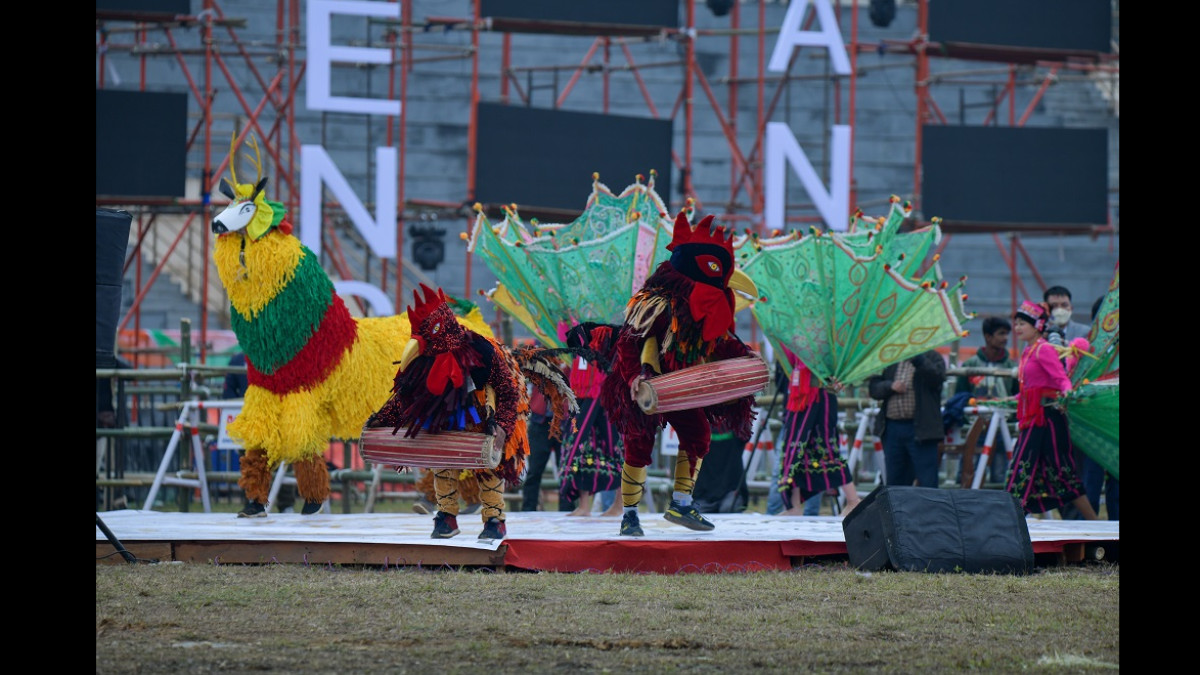 A scene from the cultural performances on the morning of February 20, 2022

Tabyo added that the hope is that audience reflects on how tribal society has evolved over the years and is “slowly losing its identity through inevitable changes”.  “We hope to leave the audience with a question and to think what needs to be done to preserve our language and identity before it is too late,” he said.

As the audience was emptying the DK Convention Centre, where the play premiered, legislator Gabriel D. Wangsu remarked how it took him back to the days of yore when the state was still called NEFA. A fitting reminder, perhaps, that as Arunachal Pradesh heads into the future, remembering its past will be ever more important.