In her poetry collection, ‘Noise Cancellation,’ Jhilam Chattaraj cleverly recasts the concept of reducing background noise within the paradigm of meaningful living, insulated against the humdrum of daily existence

‘Noise Cancellation’ by Jhilam Chattaraj explores refreshingly quirky perceptions in an era when gloomy thoughts of disease and death have seeped into the recesses of our consciousness.  The most redeeming aspect of her poetry lies in the fact that it can be relished by readers without expending extraneous critical thought, while at the same time inspiring them to perceive apparently mundane things in a different light. In a recent online book launch, the poet commented upon the significance of the title in very relatable terms. She recalled an incident dating back to 2019 when she came across the term “noise cancellation” while purchasing a new pair of headphones. Jhilam has cleverly recast the concept of reducing background noise through advanced technology for better auditory experience within the paradigm of meaningful living, insulated against the humdrum of daily existence. The poem, “Noise Cancellation,” thus heavily relies on monosyllables. It aims to create the effect of reduced distraction and pursue a ‘sustainable consciousness’:

Ears pour nude noise
on palms that swell and spill.

Bones bloom on strange beds,
they don’t fear this storm.

Sea of rage, sick with a slab of glass,
phones turn the key; 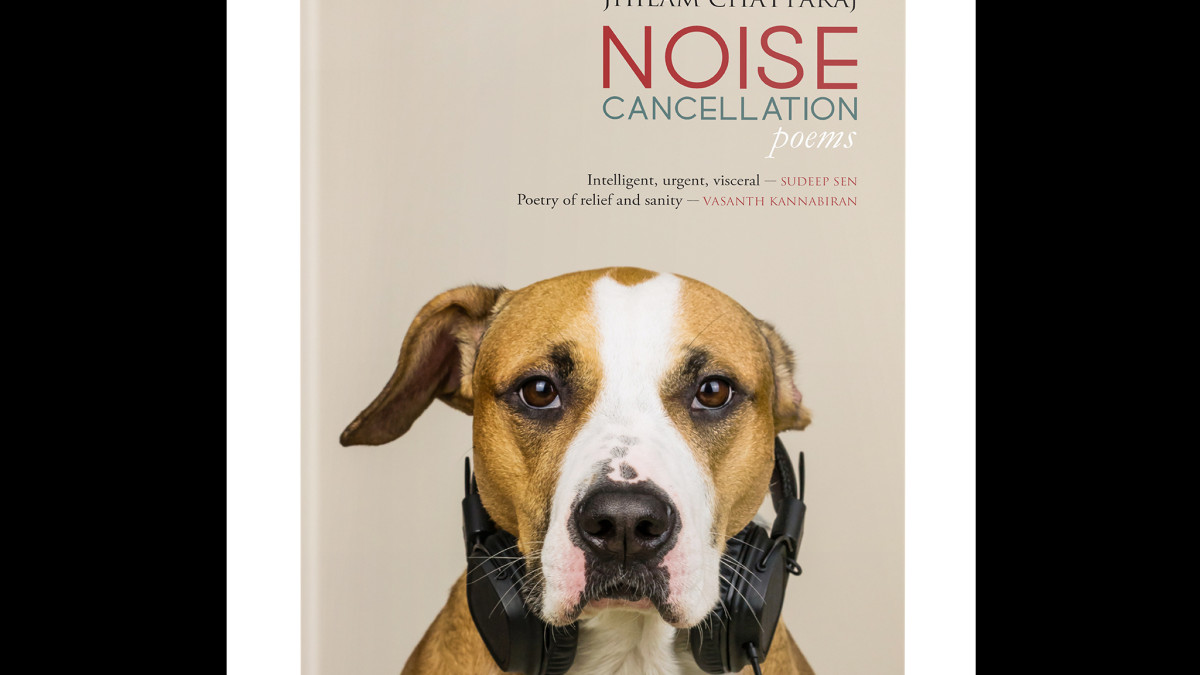 In the first section of the book, titled ‘Active Noise Control,’ Jhilam’s poems unfold one after the other like different songs shuffling on within a playlist. However disparate they might apparently seem in their range of subject-matters, the connecting strain lies in the lucidity of expression that characterizes every single poem. For instance, the poem, “Phuchka,” explores the delectable street food along with the cultural politics around it:
Phuchka/Gupchup/ Patashe
Golgappe/ Paani puri/Tikki

Eldest street queen; social eating
from the palms of northern men.
I remember his eyes, his trembling hands
when cities chased him, the ‘dirty migrant.’

India bleeding
between north and south.

Jhilam is visceral in her exploration of human nature; from the poignant acceptance of death in the poem, “A Universe without Your Ringtone” to a philosophic commentary on communal violence in “Park Street, Kolkata, 28 February 2020.” She critiques capitalist expansion into the Indian handloom sector in ‘Block Prints.’ She evokes the spectre of British Imperialism through personal histories in “The Boy who loved the British.”
The poet’s attitude towards the pandemic is multifaceted. In poems like “I ran the marathon without shoes,” she acknowledges the radically altered dynamics of living, teaching and interpersonal relationships. Poems like “Lizards” and “Transition” highlight the necessity to look beyond the material realities of life and delve into a more contemplative mood of assessing its nit grits.
In the second section, ‘Portraits in Pods’, Jhilam weaves a series of Cinquain variants. These short poems with their delicate syllabic pattern, 2.4.6.8.2 leave a lasting impression on the reader’s consciousness:

Father,
not house, a blue
postcard, the smell of blue
ink, curl of your fingers—warmest
infolds.

Ordinary cuisines, objects of daily use, places, situations and people are presented with a new sheen, making them endearing aspects of human life rather than banal trivia to be unceremoniously dismissed.

The poems come across as a distinct blend of Romanticism and a Modernist sense of isolation, anxiety and despair. Sensitive issues of gender discrimination, sexism, stultifying patriarchal norms and domesticity are tactfully played out within a broad spectrum of contemporary concerns. However, the author’s stance is not that of a preacher or an outright revolutionary but rather that of a keen observer and critic who is aware of her own socio-political ideologies as she questions the worn-out kinks within the system. Her approach is darkly comic, especially in poems like, “The Windmill” and “Lipstick.”
Despite possessing a palpably Indian flavour, Noise Cancellation also has an undeniable touch of the cosmopolitan in the author’s outlook, thereby enabling her poetry to achieve universality in its appeal. Certain terms such as ‘khunti’ and ‘sheel-noda’ have been transliterated directly onto the pages in order to retain their cultural essence, which remains curiously interesting for those who are newly introduced to them.

In a nutshell, past, present and speculations on the future, cerebrally comingle to weave an intricate fabric of memory, consciousness, smells, sights, sounds and desire. Each sensation is tinged with beauty, and a refreshing sense of genial humour.

(Stella Chitralekha Biswas is a doctoral student at the Centre for Comparative Literature and Translation Studies, Central University of Gujarat. Views expressed in this article are personal and may not necessarily reflect the views of Outlook Magazine)