Kerala Temples And The Fascinating Art of Mural Painting

Kerala’s tradition of mural paintings dates back to the seventh and eighth centuries, with temples, palaces and churches here boasting of these rich artworks.

More from Pooja Pande
View All

It was a random visit to an 8th century Shiva temple at Todeekalam temple in Thalassery, that left me completely awestruck. It’s a small place in the Kannur district, notorious for numerous political murders, that form the quintessential part of lives here in the northern part of Kerala. Little had I known that this journey would be a life-altering one for me. First look at the walls embellished with Kerala murals seems to have inspired, not only my mind but also my soul. Characteristic warmth, elaborate ornamentation and subtle shading of these paintings captured my imagination and I decided instantly to go every mile to learn this art.

It set me on a journey of exploration and research. I found out that Kerala had a rich and long tradition in mural arts dating back to the seventh and eighth centuries, with temples, palaces and churches boasting of these rich mural paintings, the oldest being found in the 9th-century rock-cut cave temple of Thrunanadikkara (now in Tamil Nadu).

Measured Love: They Found Each Other In The Darkness of Things-Part II

Zen And The Art Of Share-Auto Rides: Pandemic Notes

The depiction of Gods were illustrations of stories from mythological texts dating back to ancient times like Ramayana and Mahabharata. Other traditional texts these artists followed were the 15th-century Tantrasamuchhaya on temple architecture written by Narayana and 16th-century Shilparatna by Sreekumara. Legends and episodes from Puranas, epics and folklore inspire these murals. For example, the depiction of Girija-Kalyanam meaning Shiva’s wedding with Girija at the famous Mattancherry Palace in Kochi is based on the epic poem Kumara-sambhava by Kalidasa. Episodes from SrimadBagvadGita have inspired the murals ofPadmanabhapuram Palace and Krishnapuram Palace. 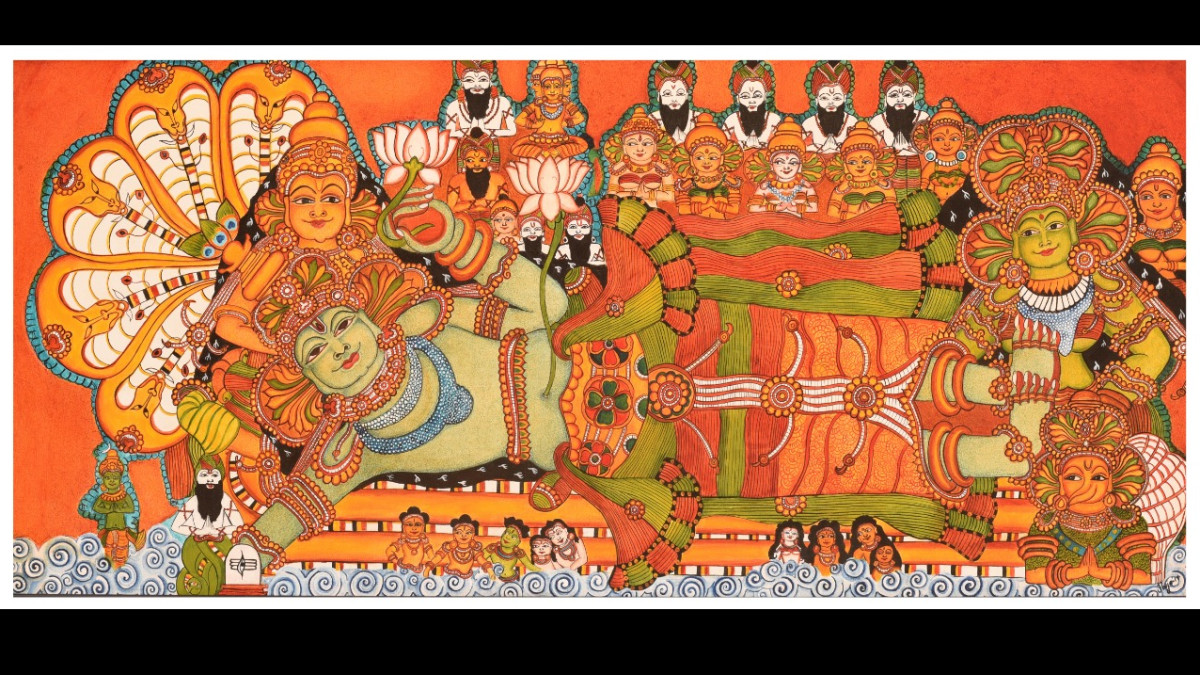 The headdresses are exuberant and elaborate. An important source for this kind of correct and realistic representation of Gods and Goddesses is based on the Dhyana-shlokas. It describes in precise form the physiognomy, facial and bodily expressions like the posture, details of eyes, head and limbs and also ornaments and objects in its hands etc. There are more than 2000 Dhyan shlokas that help the artist visualize the true picture of the deity. The compositions require strict adherence to the precise proportion, pose and background. For instance, the face is to be divided into three sections, the neck is to be one-fourth of the face, the length of the chest is to be equal to that of the face and so on.

On further enquiry, it became clear that the preparation of the walls for these paintings itself required special expertise for people had to undergo training to learn the art of preparing the walls. Plaster of a mixture of lime and sand is prepared in the ratio 1:2 and applied on the walls. It is followed by 25 to 30 washes of a mixture of quick lime and juice of tender coconut. 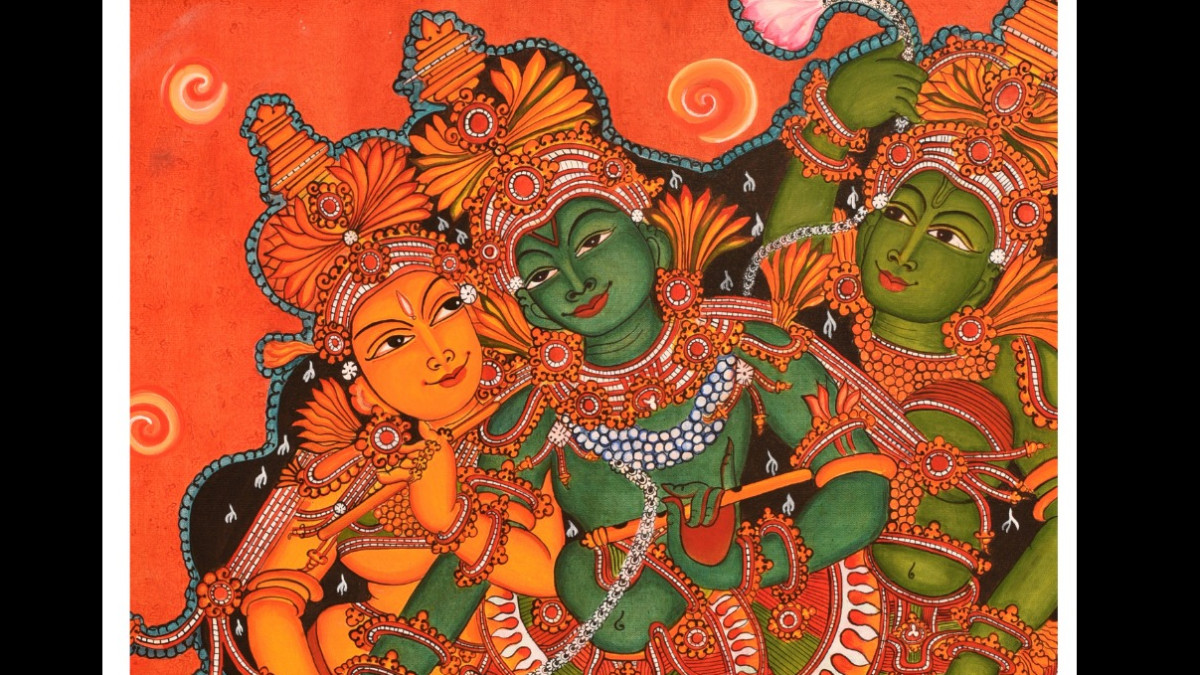 What was very intriguing about these paintings is the usage of only five colours or pancha-varna i.e ochre-yellow, ochre-red, white, black and green. The source of these colours includes lime for white and soot of oil lamps for black colour. Red and yellow colour is derived from laterite soil and green colour is obtained by mixing the dried pigment extracted from Nellamari plant mixed with a mineral called Eravikkara. The colours chosen for various characters like Shiva, Vishnu, Ram etc. are on the basis of their characteristic features like green for ‘Sattvic’ or balanced, red for ‘Rajasic’ or powerful and white for ‘tamasic’ or inert.

The borders of these paintings are also decorated with reliefs including birds, animals, flowers, creepers etc. Wooden utensils are used for mixing the colours and the binding media is derived from tender coconut water and Neem tree. As far as the painting brushes were concerned, flat brushes were made from the hair found on the ears of calves, medium ones from the goat’s hair and the fine ones were made from delicate blades of grass. 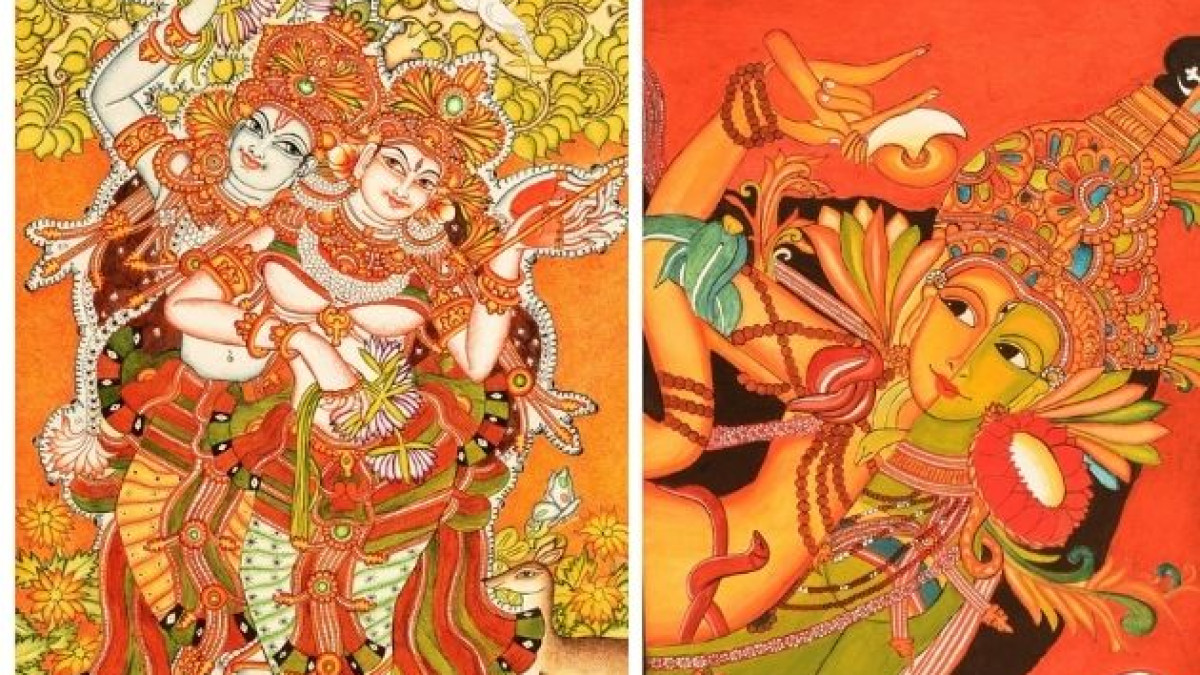 Knowledge about all these unique features of Kerala’stemple art made it quite an interesting venture and during the course of exhibitions I found out that there was very little knowledge among people about this beautiful art form. It made sense to pursue it with even more vigour and enthusiasm. And it would not be wrong to say that today I am proud that I could finally master the art through formal training. I have also held a number of exhibitions, if not for show, but for bringing this art form into the mainstream.