Meera And Lalla, Two Women Mystics And Their Poems Of Love, Longing, Surrender

Meera’s songs are not only popular in Merta, her hometown but across the country. Her songs have been recorded by Indian classical vocalists and by several popular Bollywood singers and musicians.

The serpentine lanes of Merta city, nestled in the western half of the desert state of Rajasthan are still bustling with the memories of mystic poet Meera Bai, even though five centuries have passed since she lived. Merta town, 200kms away from Jaipur is the home town of Meera Bai, a 16th-century mystic poet and devotee of Lord Krishna.

"Paayoji maine Ram Ratan dhan paayo (I have been given the richness of Lord's name blessing”, a famous Meera bhajan reverberates inside a giant book shop as one strolls past small tea stalls and vendors selling flowers in the lane leading to the Meera Bai temple. During the 500-metre walk, one encounters happy strangers who are eager to narrate legends associated with the mystic. Most of the shops nearby have miniature wooden figures and artworks of Meera Bai in her famous prayer position- clutching an ektara (a musical instrument with one string), with a dazed look on her face in the devotion of Lord Krishna, whom she endearingly called Giridhar.

At the end of the lane is a giant Meera temple also known as Charbhuja temple and next to the temple- is a gate built of red sandstone leading to Meera Bai Smarak or Meera Bai Memorial built of which has her life-size portraits, poetry and paintings depicting her life. 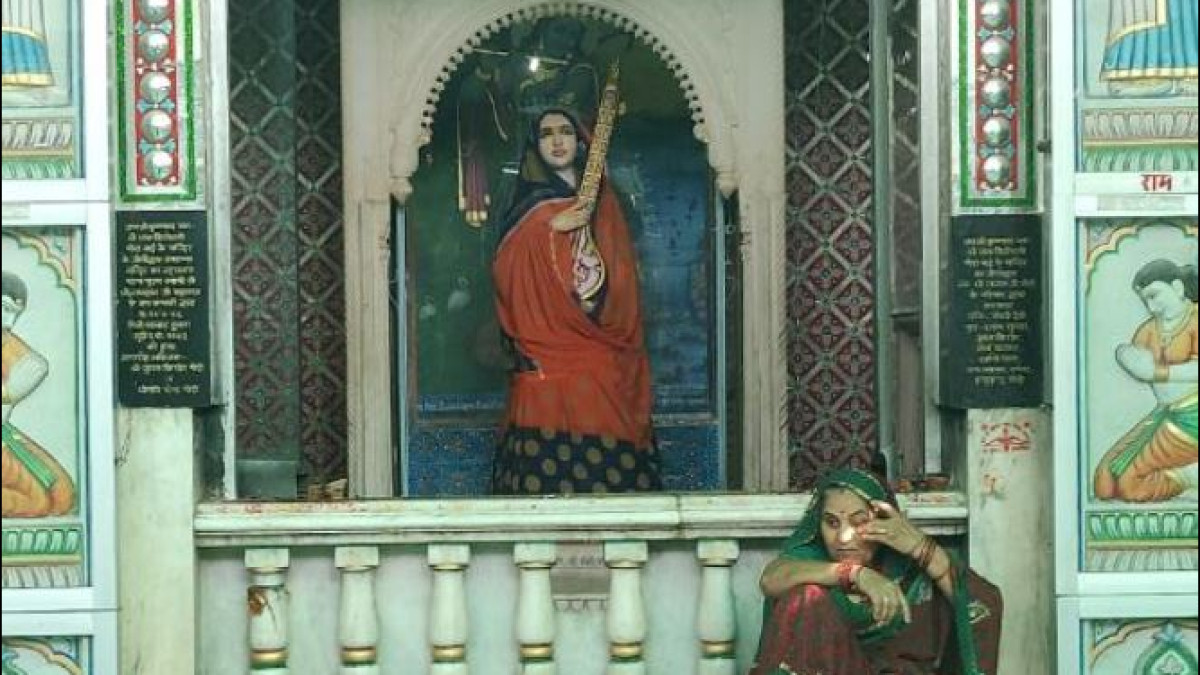 Inside the temple is the main idol of Meera Bai holding the Ektaara and seen behind her is Lord Krishna playing the flute. In the corner of the temple decorated with mirrors, a group of local women is reciting a Meera bhajan, “mohan aao to sari, madhav ra mandir mein, meera bai ekli khadi, girdhar aao to sari”.

“In this temple instead of traditional hymns, we recite Meera’s songs of love and longing for Krishna. We come here every day, sit and recite her songs. Even at home while doing chores, I keep humming these songs and so does my daughter and granddaughter”, said Durga Bai Rathore, a dweller from Merta city who visits the temple regularly told Outlook.

“This is a temple of love which reminds us about the life and sacrifice of Meera Bai a poet, singer, dancer and devotee of Lord Krishna. Her life is a struggle against a patriarchal society that opposed her love and devotion for Krishna. She was a poet and a rebel too. Her story empowers us”, added Durga.

Meera’s songs are not only popular in Merta, her hometown but across the country. Her songs have been recorded by Indian classical vocalists and by several popular Bollywood singers and musicians. They are sung everywhere: in temples, music festivals and in films. She is one of the prominent voices of the Bhakti Movement: a movement of religious reformation, her life has been turned into feature films, dance, dramas, and plays.

Rajasthan based author Madhav Hada who has written books on the life and poetry of Meera believes, even after five centuries Meera’s story and her compositions are revered and not outdated.  “Meera's story influenced many of her followers and so did her songs. Many devotional songs composed today are inspired by the original lyrics and songs written by Meera” said Hada who was a former professor of Hindi at Mohanlal Sukhadia University in Udaipur.

In his book, Hada establishes her as an empowered princess and a poised human being as opposed to merely a saint immersed in devotion. “Meera is a rebel, a devotee and a poet. She led an eventful life. Meera believed ‘Soney Kaat na lagey’. (Gold never rusts)”, Hada, the author of the book Meera Vs Meera, told Outlook.

Calling her poetry as an equaliser for communities. Hada who has also compiled anthologies of Meera Bai’s poetry titled Meera Rachana Sanchayan in 2017 added, "Meera was a Rajput princess but her songs are equally popular in marginalised communities too especially among the Meghwal community".

Talking about Meera's early life Rajasthan's noted historian Rima Hooja states that she was born in the royal family in Marwar, Rajasthan and when she was five, her mother died, and she was brought up by her grandfather. In her teen's she was married unwillingly to Bhoj Raj, a prince of Mewar, a Rajput royal. But she found married life oppressive and wanted instead to devote her life to Lord Krishna, who she believed was her true husband. She composed songs in his praise and sang them in temples dancing in ecstasy and rapture. " In her compositions, she has used metaphors such as Girdhar, Dark-skinned, Hari, and Govinda while referring to Krishna. Krishna is approached by devotees in different forms, but Meera refers to him romantically as a worshipper - her beloved - who she can scold but she belongs to him. She writes ' mujhe darshan nahi de rahe ho, par mei aapki hoon' (you are not revealing yourself to me, but I belong to you", explains Rima Hooja, author of the book A history of Rajasthan.

According to John Stratton Hawley,  Professor of Religion at Barnard College, Columbia University, the nature of Meera's poetry is complete surrender as she speaks of a personal relationship with Krishna as her lover and God.

"After making me fall for you so hard, where are you going?
Until the day I see you, no repose: my life, like a fish, washed onshore, flails in agony.
For your sake I'll make myself a yogini, I'll hurl myself to death on the saw of Kashi.
Mira's Lord is the clever Mountain Lifter, and I am his, a slave to his lotus feet",  - A composition of Mira translated by John Stratton Hawley 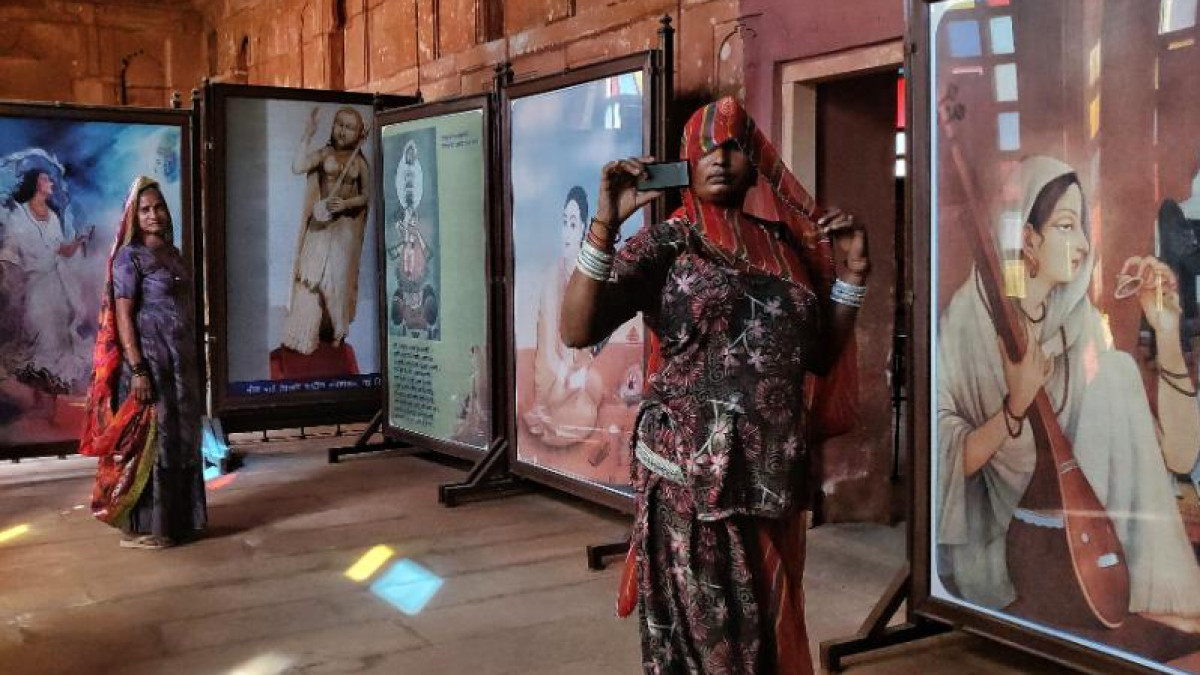 Women in odhani walk past a painting of Meera Bai inside the Meera Memorial in Merta city in Rajasthan, the hometown of Meera Bai - Tabeenah Anjum/Outlook Photo

While Meera’s love songs for Krishna blossomed in the desert, before her birth in the fourteenth century, in the Kashmir valley a mystic Lalla Ded - Lalleshwari or Lalla Yogini for Hindus and Lalla Arifa for Muslims -was born in Pandrethan, 10 kilometres away from Srinagar.
Even after seven centuries, Lalla Ded is arguably Kashmir's best known spiritual and literary figure who is instrumental to the body of vernacular mysticism in the region, and a harmonising influence and crucial link between traditional mysticism, Shaivism and Sufism. Lalla a Kashmiri Shaivite mystic was a devotee of Lord Shiva, her poems known as vakhs are among the earliest known manifestations of Kashmiri literature. There are a total of 258 vakhs 'sentences' written in Kashmiri attributed to Lalla.

Author Ranjit Hoskote in his book I Lalla (the translation of the poem of Lal Ded) writes Lalla's poems shimmer with their author's experience of being a yogini trained in devotional practices of Kashmiri Saivite mysticism. Hoskote writes, "Lall's poetry is fortified by a palpable first-hand experience of illumination. In some poems, she transmits the teachings that are the fruit of her experience. She enacts the theatre of her devotion in different registers. She yearns, she demands, she laments and can be irritable with the divine and yet throw herself at its mercy and sing of unabashed passion ". Citing as an example is one of her vakhs, - translated in English by Hoskote,

"Wrapped in yourself, you hid from me,
All day I looked for you
and when I found you hiding inside me,
I ran wild, playing now me, now you"

An author of the book 'The Mystic and the lyric' Neerja Mattoo believes that the poetry of Lalla Ded continues to be relevant as she had a catholic vision and love for human beings and a desire to uplift them.  "Her vakhs are referred to in the present times, even though we have a different breed of people now. Lalla Ded continues to be tolerant, accommodating and yet is a bold voice who speaks for marginalised communities and celebrates the work of craftsmen, potters in her composition. She has given voice to a woman and her words are even now carried",  Neerja Mattoo who was professor of  English at Government College for Women in Srinagar told Outlook.

"Another contribution of Lal Ded is to make philosophy of Shaivism open to all by bringing it out from the closets of Brahminism. When she talks about the yogi practice of breath control she mentions how saw the supreme lord who she will not let go of. The metaphors she uses denote her resilience, surrender, longing and yearning. While poets and researchers from across countries continue to translate and write about Lalla Ded, in Kashmir, her birthplace, her poems are sacred and synonyms for resilience", added Mattoo.