UP Elections 2022: Owaisi Has Nothing To Lose, Everything To Gain

In his poll speeches, Asaduddin Owaisi, President of the All India Majlis-e-Ittehadul Muslimeen, invokes Islam and Allah in speeches, repeats that there is no difference between Samajwadi Party and the Bharatiya Janata Party, Akhilesh Yadav and Yogi Adityanath.

He has his presence in his home state; he tried his luck in Bihar and fared well there. He is now trying his luck in Uttar Pradesh, his most ambitious political bid.  Asaduddin Owaisi, President of the All India Majlis-e-Ittehadul Muslimeen, invokes Islam and Allah in speeches, repeats that there is no difference between Samajwadi Party and the Bharatiya Janata Party, Akhilesh Yadav and Yogi Adityanath. He refers to Yogi Adityanath as baba. He says Samajwad of Samajwadi Party and Sab Ka Sath Sab Ka Vikas of the Bharatiya Janata Party have not touched Muslims. He asks Muslims to give talaq, talaq and talaq to BJP and SP.

He is not participating in UP elections for the first time. His party contested 38 seats in UP in 2017 and lost all of them with overall vote share of 0.24 percent. This time he is out with full force. He doesn’t want to be called a Muslim leader only but wants to be seen as a Muslim leader.

Speech after speech in UP, he projects Babu Singh Kushwaha of Bhagidari Parivartan Morcha as Chief Minister, leaving deputy chief ministership for a Muslim candidate. He says it is not the last time he is in the UP. “I have come to UP the first time but not the last time. I will come again and again,” he says, thus slowly Owaisi is projecting as AIMIM pan India party.

In the run-up to the election, Owaisi, was a regular visitor to the state, holding meetings. In almost all his speeches before and during the present election campaign, Owaisi has hit out at both the BJP and the SP and repeatedly says the SP doesn’t want an “independent leadership of Muslims in UP”. He argues that since both secular and Hindu rightwing parties do have not anything for Muslims, why a Muslim party or a Muslim leader shouldn’t lead them. 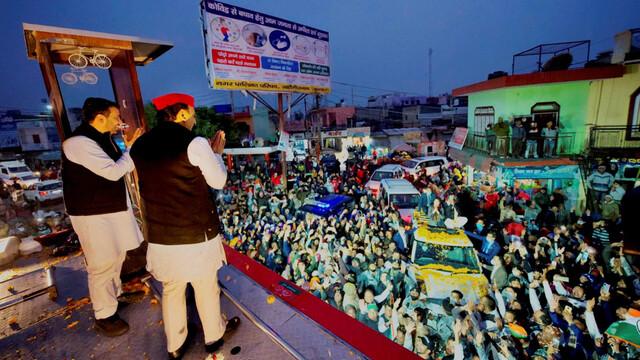 “If you ask baba (Yogi), he says Owaisi is promoting the Talibani mindset in the Uttar Pradesh. If you ask Akhilesh whether Muslim women should have the right to wear Hijab if they wish so, Akhilesh will say I didn’t hear it. How long you will shower Akhilesh with perfume. Shower it on us, we will spread its fragrance throughout the country,” Owaisi said in his recent speech at Kannauj district.
“Once I leave the venue, the SP workers will come to you to tell you Owaisi’s speech might have made you emotional and it will benefit BJP. Do tell Samajwadi Party how Akhilesh’s wife lost in 2019 when we were not even in the fray. Your vote is not going to the BJP but it shows Akhilesh Yadav’s workers are enjoying tea in Modi’s lap.”

“Defeat SP and the BJP, and strengthen Owaisi and Kushwaha.”

Deoband Assembly constituency, the seat of the top Islamic seminary of Darul Uloom, has been at the centre of the high-pitched battle between the ruling BJP and opposition parties ever since Chief Minister Yogi Adityanath laid the foundation of the Anti-Terrorism Squad here. Muslims see it as a move to divide the electorate.

Of the approximately 3 lakh voters in the Deoband constituency, around 1.2 lakh are estimated to be Muslims. Despite having a massive Muslim population, the Deoband has gone to the BJP in the 2017 Assembly elections. The BJP’s Brijesh Singh Rawat defeated BSP’s Majid Ali by 29,400 votes. It went to fresh elections on February 14.

Most of the Muslims and parties opposed to the BJP blame the AIMIM for dividing the Muslim votes to favour the ruling party.
The Samajwadi Party, which has seemingly enjoyed a monopoly over the Muslim votes so far, has withdrawn Maviya Ali in the constituency and instead fielded Kartikey Rana, a Rajput.

The SP candidate Kartikey Rana has dismissed the AIMIM in recently held elections, calling it the “Vote-katwa and B-Team” of the BJP.

“No one takes AIMIM seriously as everyone knows it is the B-Team of the BJP,” Kartikey says.

AIMIM has fielded Umair Masoodi from the prominent Masoodi family of Deoband. His father, Masood Madani, is a political figure in the area who had enjoyed a ministerial position in the Uttarakhand government. His association with Mahmood Madani of the Jamiat Ulama-i-Hind and Arshad Madani, who is the principal seminary of Darul Uloom, is not lost on anyone despite claims that both families have severed ties.

At a time when the right-wing forces propagate the Muslim population is growing and one day a Muslim would be Prime Minister, Owaisi doesn’t hesitate to add some fodder to their imagined fear.  “I may not be alive to see this, but one day a woman wearing hijab will become the prime minister of this country,” he says.

He knows that Muslims, who make up 19 per cent of UP’s population, are likely to be a decisive factor in around 60-70 seats, where their population is between 35 to 50 per cent. That is why the SP calls him BJP’s B-team but he doesn’t shy away from responding to the charges. He sarcastically dismisses the SP criticism, saying the SP needs votes of Muslims and backwards castes but not them.
“The SP wants that the minority should lay the red carpet for it, take batons for it and Akhilesh Yadav should earn benefits of these sacrifices. This will not happen,” he adds. And his next target is the BJP. He says even though the BJP talks about Sabka Saath, Sabka Vikas, its Chief Minister Baba has supported only his tribe. “And in the same way, when Samajwadi Party forms the government in the UP, in the name of Samajwad, the party does parivarvad (nepotism) only. That is why you have chance and opportunity.”
In his latest address in Kannauj district of Uttar Pradesh, while seeking votes for Bhagidari Parivartan Morcha, he went further saying if there would a blessing of the people of UP, the state will have Bhagidari Parivartan Morcha Chief Minister and his name will be Babu Singh Kushwaha. “We have also decided there will be three deputy chief ministers including one from minority and the other two from backward classes,” he says and the crowd cheers.
But perhaps realism dawns on him soon. In the next sentence, he spells out his motives for coming to Uttar Pradesh. “If All India Majlis-e-Ittehadul Muslimeen has come to the UP, we have not come for politics or business. I have come here with the blessing of God. I will be coming here as I have prayers of people. And my motive to come to UP is that you people should be made leaders, you should get your due, when we talk about social justice, we mean to say, we should get our share in the politics, in education, in jobs and also even in contractors.”
“But the BJP and the SP doesn’t want to give any share to the minorities and the backwards castes.”
With Babu Singh Kushwaha on his side, he says that he has got the platform to raise his voice against the oppressed and for the oppressed. To lift the mood of people, he brings Kushwaha back into discourse saying if Yogi and Modi will be defeated in the UP, it won’t be Akhilesh who will defeat them, it will be Babu Singh Kushwaha.  “Owaisi and Babu Singh Kushwaha have joined their hearts. They are at one stage. Now you have to join together and make them win in the polls. So that we will take the battle of social justice forward in the UP,” he says.
Owaisi argues that for the backwardness of the Muslim community all parties who ruled the UP from Samajwadi Party to Mayawati's Bahujan Samaj Party to the Bharatiya Janata Party’s rule are responsible. “In UP minority Muslims are most backward, less landholding is with Muslims, educationally Muslims are most backward. When our community is most backward what Samajwad and sab ka vikas, the SP and the BJP is talking about. In India poor doesn’t get their right by begging but by fighting. I don’t care about my life. The oppressors fired bullets thinking  Owaisi will die. Oppressors will fire again but as along my God wishes me alive I will be alive. Four rounds of fire will not silence me. If it would have killed me, you would have carried forward my message,” Owaisi says as the mood turns emotional.
“A Minister went to the family of a person who fired at me. Why they are in love with those who opened fire? Is it the way to fight against Mafia Raj? I swear by my God and Prophet (PBUH) I pledged in the Parliament I don’t need security, my Allah will save me,” he said.
“They sent their Minister to the family of one who fired at me and then say my life is under threat.”
Owaisi asks Muslim women if they wear Hijab and Naqaab, they must wear them with pride.
“It is our constitutional right. Whether I see that day or not, but that girl who was shouted at for wearing Hijab one day she will become Prime Minister of the country,” Owaisi says.