At a time when the country is sliding into reactionary politics, an alliance of over 80 civil society organizations has brought the focus back on governance and time-bound redress of public grievances.

For Keshar Devi, a middle-aged widow, a monthly pension of Rs1,500 was the only financial support in her life. But it was stopped in September 2020, abruptly. A resident of Rajasthan’s Barar panchayat, Devi can’t read and write. To find out the reasons, a few months later, she visited the office of Mazdoor Kisan Shakti Sangathan (MKSS) — a people’s organisation and part of the growing non-party political process in India — at Bhim in Rajasamand district. When the matter was taken up with the authorities concerned, her claim was found to be “Cancelled” and reason marked as “Death”.

But this is not an isolated case where a person has been barred from getting the promised benefits under a government welfare scheme following their death in the digital records. In fact, in many such cases, the beneficiaries got their pensions restored with a new sanction number following the efforts of the Sangathan. But they were unable to recover their due amount lost for the period in between when they were fraudulently declared dead.

Rain Likely On Jan 21, 22 In Parts Of Rajasthan: MeT Dept

Seeking justice for such people and ensuring social accountability, ahead of the upcoming budget session, the Sangathan in collaboration with the Soochna Evum Rozgar Adhikar Abhiyan has urged the state government to bring the Rajasthan Transparency and Social Accountability Bill. Additionally, the Abhiyan—which is an alliance of nearly 80 social movements and networks — has stressed the inclusion of certain safeguards for the whistleblowers in the proposed law.

“Rajasthan has given the country Right to Information law and National Rural Employment Guarantee Act (NREGA). It can show the way forward for a legal framework that ensures people the right to hold government accountable for its mandate,” Nikhil Dey of the MKSS, told Outlook, adding that “at a time when the country seems obsessed with the communalism and reactionary politics, we want the focus back on governance and day to day problems of the common masses.” 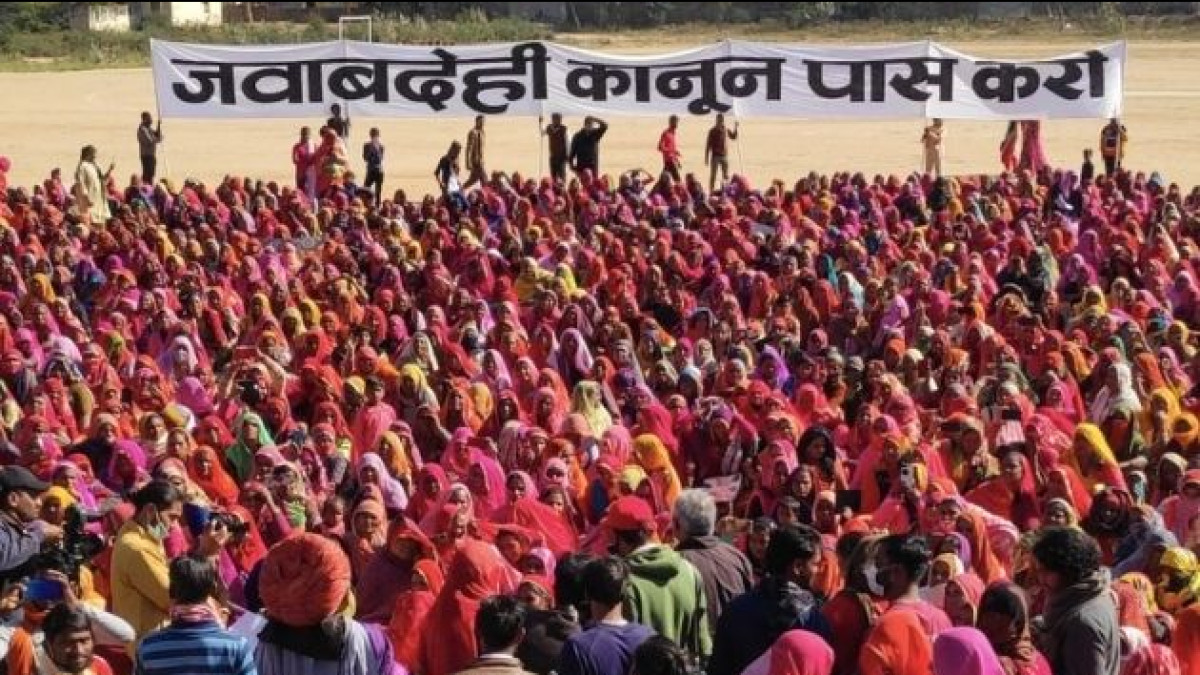 The proposed law aims at delineating the minimum standards of service delivery, making provisions for citizens’ right to be heard, their grievances acknowledged and their time-bound redress.

Like the RTI Act, the accountability bill seeks to ensure that accountability flows from the administration to the people. It relies upon legal provisions under the Right of Citizens for Time-Bound Delivery of Goods and Services and Redressal of their Grievances Bill, 2011 and the Right to Hearing Act of the Rajasthan government.

“All this is brought together in an interwoven legal framework,” Dey informed. “The law is based on the experience post the RTI era. Such a law could in a true sense of the term be RTI Part-II, taking us from transparency to accountability to the people.”

As per the proposed law, all public officials are mandated by their departments and superior authorities to carry out their duties as per the citizens’ charter and job chart.

There is also a provision for a general grievance officer in every public office for every department at the state, district, block and gram panchayat level. The proposed law also mandates a time-bound action over registered grievances. As per its provisions, a complainant can appeal to an independent district grievance redress authority, which will serve as the first appellate authority. An appeal against the order or inaction of the authority will rest with the state public grievance redress commission.

Both the authority and the commission will operate independently. They will have the authority to impose penalties and award compensation.

Also, every social sector programme is required to put aside one per cent of its total budget for transparency, public participation and monitoring. It stipulates the setting up of independent information and facilitation centres at the gram panchayat and block level besides calling for a social audit directorate to carry out periodic audits of government programmes and the departments. 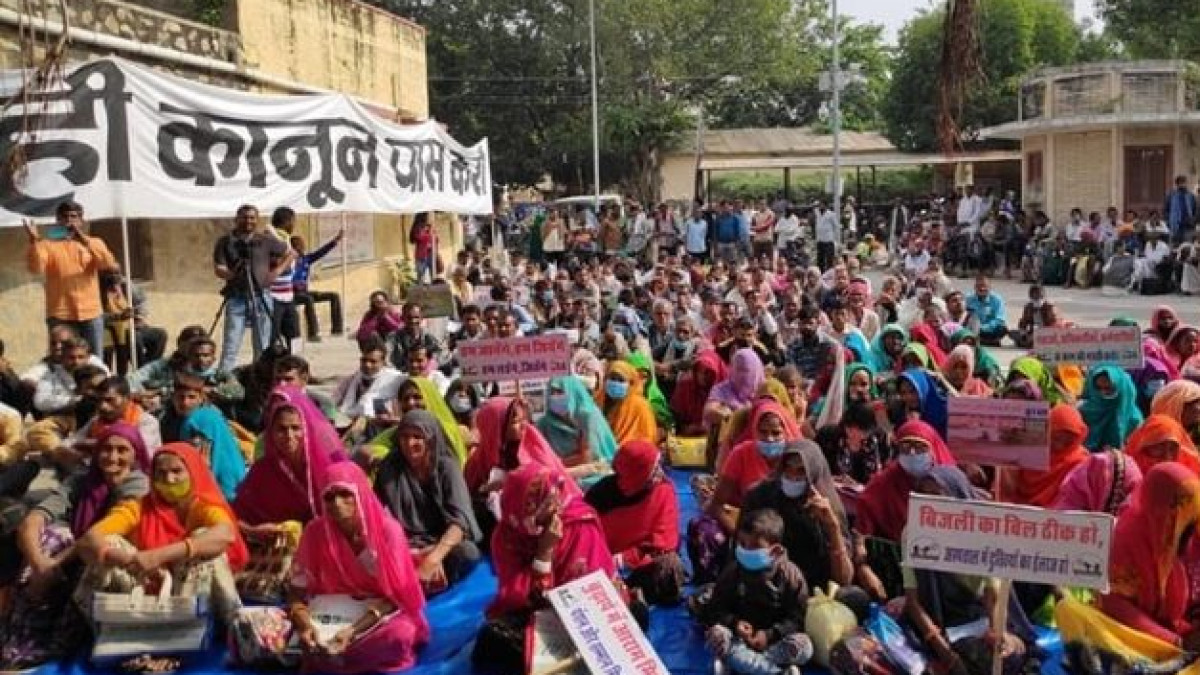 In the latest incident in December last year, the hands and legs of a 30-year-old RTI activist from Barmer, Amra Ram Godara, were broken and pierced with nails. He had highlighted huge corruption in the execution of developmental works granted under NREGA in Kupliya panchayat. Taking cognizance of the matter, the Rural Development and Panchayatiraj Department, ordered a probe on December 24, 2021.

Apart from Amra Ram, many other RTI activists have come under attack for exposing corruption-related crimes in the state, according to a fact-finding report by the Peoples’ Union for Civil Liberties (PUCL).

“Several RTI activists are facing attacks and threats but we hardly see any action against the perpetrators,” the report said, deploring, “Only those who try to expose corruption end up getting slapped with the false police cases against them.”

In the past, Rajasthan’s Rural Development and Panchayatiraj Department had said on the record that corruption complaints regarding the work commissioned under MGNREGA result in acrimony between the complainant and local panchayat representatives. In an order dated March 12, 2012, the department directed that wherever the complainants or government officials are attacked or any crime is committed against them in such cases, a probe panel from the head office would conduct an investigation against the entire panchayat under the police protection.

“When the accountability law gets implemented, a complainant will always be at the risk of getting attacked or victimised,” said Nikhil Dey, adding that “over 100 RTI users have been killed across the country so far since the implementation of the RTI law”.

Dey added, “We have asked the state government to either bring in a standalone law or incorporate such provisions in the accountability law that protect the complainants.”

Notably, the Whistle-Blowers Protection Act, 2014, notified on May 12, 2014, has not been implemented so far. In 2019, the Union Ministry of Personnel, Public Grievances and Pensions had clarified that the law required further amendments aimed at safeguarding against disclosures affecting sovereignty and integrity of India, Security of the State, etc. before being introduced. The law, which provides a mechanism to investigate alleged corruption and misuse of power by the public servants, also promises protection to anyone who exposes wrongdoings in the government bodies, projects and offices.

In Rajasthan, the civil society groups have been campaigning for the accountability law for the last over ten years. Earlier, in 2015-16, the Soochna Evum Rozgar Adhikar Abhiyan had organized a hundred-day long “Jawabdehi Yatra” through all 33 districts of the state during the BJP rule. This was followed by a 22-day long “Jawab Do Dharna” in Jaipur.

The Indian National Congress had promised to bring an accountability law in its 2018 state assembly election manifesto. And Chief Minister Ashok Gehlot had reiterated his government’s commitment to passing the law in his maiden budget speech in 2019.

Thereafter, a committee led by former Additional Chief Secretary, Ram Lubhaya, was constituted to prepare a draft Bill, which submitted its report and a draft bill to the government in February 2020.

Referring to the report and the draft bill, Aruna Roy, a noted social activist, wrote a letter to Chief Minister, Ashok Gehlot, on December 19, 2021. “It is unfortunate that during the last three years, the government of Rajasthan has still not introduced the accountability bill in the assembly for passage and implementation. We are puzzled by learning unofficially that another committee has been set up to examine how to implement the law,” the letter read, adding that “It only seems like another step to delay passage of the law. We are therefore left with no choice but to strengthen the campaign until this critical legislation is enacted and brought into effect.”

On December 20, 2021, Roy flagged off the Jawabdehi Yatra that aimed at covering all 33 districts of Rajasthan. The outreach programme included nukkadsabhas, plays and songs to create awareness amongst local communities about the need for an accountability law. The Yatra that was scheduled to conclude on February 2 in Jaipur, however, had to be paused midway due to a surge in Covid-19 cases.

“Though the march has been called off, we haven’t stopped our campaign,” Roy said. “We are holding small meetings as per the Covid-19 protocol besides using social media to spread our message.”

Ideally, the government officials should be answerable to the citizens in a democratic country, said Mukesh Nirvasit, who is joint secretary of the Rajasthan Asangthit Mazdoor Union, which is also a constituent of the Abhiyan. But what is happening in India is that “the government functionaries remain accountable to their seniors and elected representatives only. This needs to be changed,” Nirvasit said, stressing the urgent need for the enactment of social accountability law.

Kavita Srivastava, a Jaipur based noted human rights activist and PUCL national general secretary, underscored the correlation between majoritarian hate crimes and bad governance. “The sanity will only come when we try to ensure that the ordinary people, who are completely oppressed, are enabled to exercise their right to life with dignity,” she told Outlook. “That is why we need accountability law — which is not just restricted to basic government services such as water, electricity, ration or MGNREGA wages and the social welfare schemes.”