A Stream In Kashmir Disappears Into Sinkhole, Kills Trout In Large Numbers

A stream in Kashmir disappears in a sinkhole, leaves downstream dry and kills famed trout in large numbers.

A stream in South Kashmir’s Anantnag district is going into a sinkhole since February 11. It has led to the large scale death of trout fish, especially brown and wild trout downstream.

As the water is flowing into the sinkhole continuously, there is the possibility of a large network of underground cavities or water-holding reservoirs causing further anxiety among people living around.

People fear in the coming months' water will not be available for agriculture fields. They visit the sinkhole regularly.

The government has issued a statement asking the media that their reportage of sinkhole has the potential to “adversely affect law and order in the region.”

The sinkhole has developed in Brengi village Wandevalgam (Kokernag) in Anantnag district, around 80 km south of Srinagar. On Feb 11, a vertical sinkhole occurred in the middle of a river bed draining run of the stream water into it leaving downstream dry, killing trout fish in large numbers. Around 50 cusecs of water is draining into the sinkhole as the water discharge remains low during the winters. From March onwards water level in the river is likely to rise after the melting of ice and snow on mountains.

Brengi stream had large scale brown and wild trout. Trout has around 122 years old history in Kashmir and it is an interesting read. The first consignment of 10,000 trout eggs sent by the Duke of Bedford to the then Maharaja Pratap Singh in 1899, perished on the way. But Maharaja did not give up. Another batch of the trout fingerlings brought to Valley a year after by the angler Frank J Mitchel survived. Mitchel owned a carpet factory in Kashmir.

Mitchel reared the fingerlings in the Dachigam stream and later released them in other streams of the Valley. Though the five varieties of fish were brought to the state, only two of them, Brown and Rainbow trout adapted to the Valley’s climate. What is more, the fish has developed a better taste than its western counterpart.

Trout farming is one of the major activities of the department. The annual trout production touches 262 tonnes. After trout’s introduction in the Valley’s streams, it took J&K another eighty years to think of farming the trout. It was only in the early 1980s that the fisheries department, for the first time established an ambitious trout project at Kokernag with the assistance of the then European Economic Commission. It is the second-largest trout fish farm in Asia. The annual production from the farm has reached a whopping 125 tons. Officials say the sinkhole is happening at the different streams and it will not have any impact on the farm.

From Karnataka To Kashmir, How BJP Bats For And Against Hijab 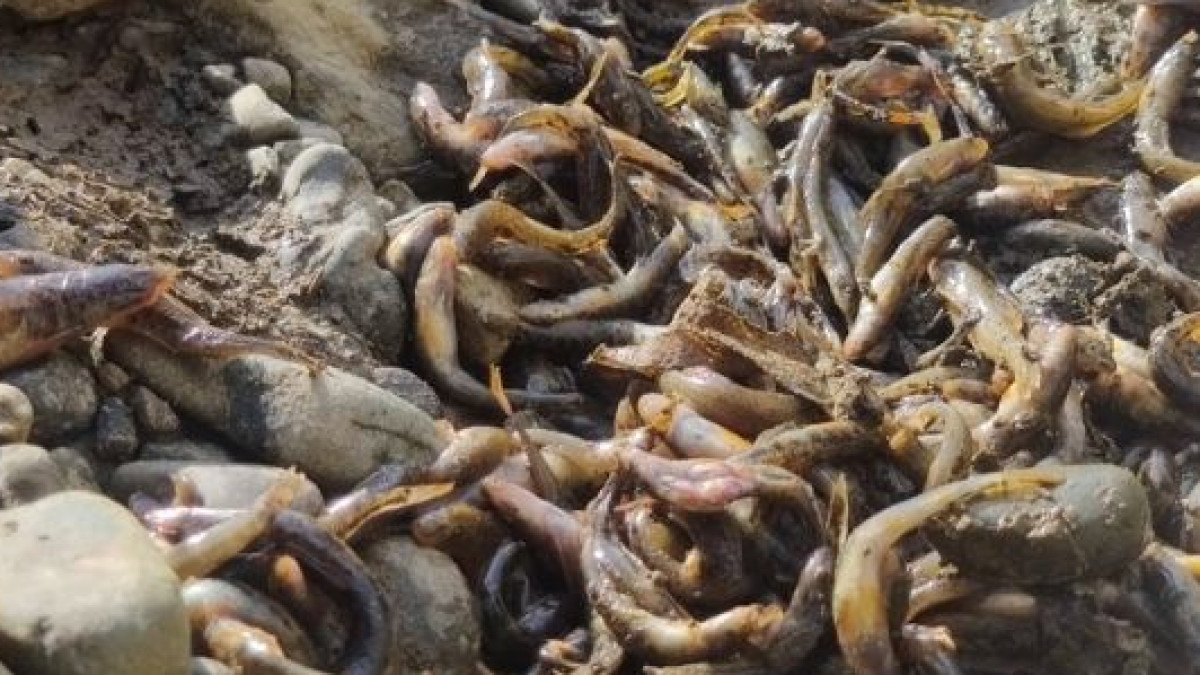 Teams from the National Institute of Technology, Srinagar; the Department of the Earth Sciences University of Kashmir; the Fisheries Department and the Geology and Mining Department, visited the sinkhole and conducted technical tests.

The teams reported to the administration that a sinkhole is a naturally occurring geological event, a result of the chemical weathering of rock formation. At the site of the sinkhole, the underlying rock formation in the area is soluble limestone (Triassic limestone). Dissolution over long periods creates cavities in the rocks and these may cave in gradually or suddenly. The teams say the underlying cavern is about 100m long downstream.

Locals say the Brengi stream irrigates thousands of kanals of agricultural and horticultural lands and drying up of it poses a serious threat to these areas. A lecturer of Fisheries Sciences posted on Facebook: “It's very disheartening to see a particular habitat dying a suffocating death. Imagine our homes, we live in are burning & all the oxygen available only accelerates the rate of burning but we can't take that in the breath."

The authorities warned media persons against moving close to the sinkhole. The advisory says it hasn’t been ascertained the water going into the sinkhole is actually of Brengi river. “Without verification through, the administration or an expert such news reporting has the potential to adversely affect law and order in the region.” “Hence all media persons are advised not to mention in their news any unsolicited and unverified reports.” Another advisory from administration says it has been observed that despite restrictions being imposed on any assembly of general public or movement of individuals near sinkhole at Wandevalgam by Sub Divisional Magistrate Kokernag, a number of media personnel continue to move close to and into the sinkhole, posing threat to their own life. “This, in turn, attracts general public near the sinkhole which increases the threat to life and makes crowd control difficult for the administration,” reads the advisory. “Hence all media personnel are hereby advised and warned not to violate the restrictions imposed around the sinkhole.” It says action under relevant sections of law shall be taken against anyone found violating the order. 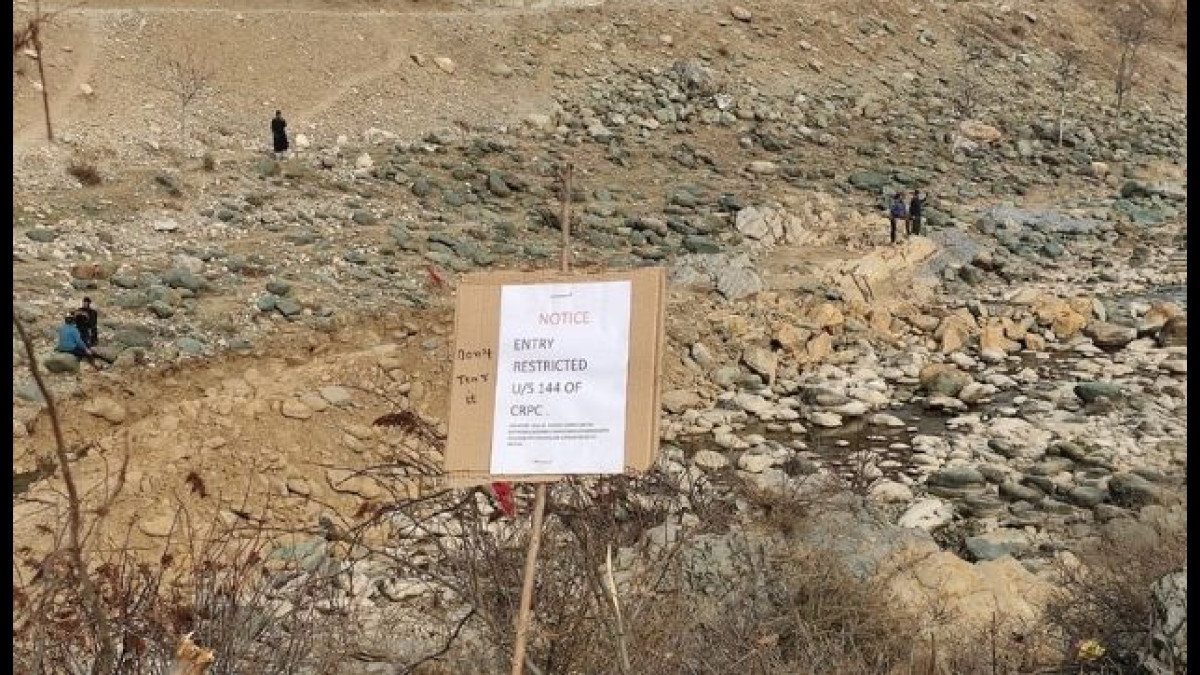 Piyush Singla, deputy commissioner Anantnag, says on Feb 11, at around 4 p.m, a sinkhole was reported to have emerged on the Bringi Nallah at Wandevalgam in Kokernag sub-division of Anantnag district disrupting the entire flow in the stream. While immediate mitigation measures were initiated by the district administration, efforts are being made to understand the scientific cause of the event, Singla’s statement reads.

“While one intervention available was to immediately fill the sinkhole and divert the stream, however, given that sinkholes are naturally occurring geological events and pose no immediate danger, it was decided to investigate into the event scientifically and ensure that the intervention is scientifically rational and is not counterproductive,” the DC says. 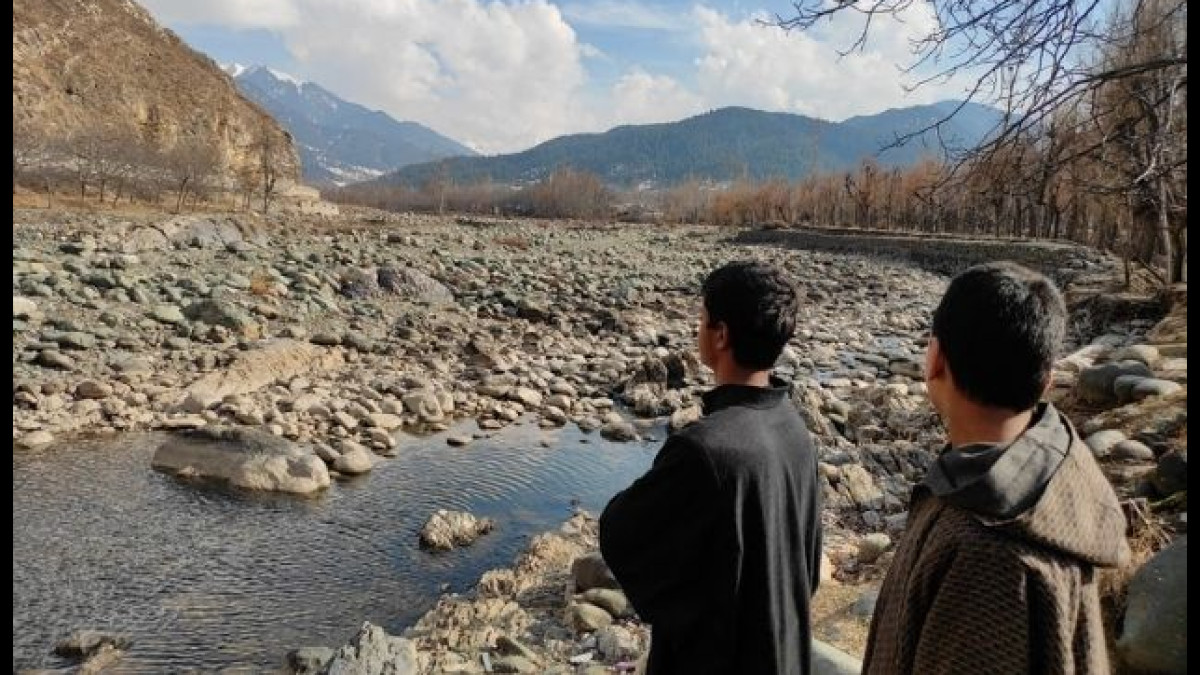 People of the valley in front of the stream. (Credit: Muneeb  ul Islam)

He says a similar event occurred 27 years ago and the same was the source of Achabal spring and it was necessary to ensure that the present sinkhole is investigated to prevent unintended drying of springs in any other part.

“A similar fact has also been recorded by Sir Lawrence in Valley of Kashmir where he mentions that Brang river which disappears in the fissures of limestone at Dewalgam is the real source of Achabal spring,” he adds.

“In the meantime, appropriate measures to fill the sinkhole and creation of another diversion is being done shortly in consultation with technical and engineering experts,” reads the statement. It says that DC has been personally monitoring the day to day unfolding of activities and a constant briefing from task force members is being taken.