Actor-director Farhan Akhtar recently got married to actress-singer Shibani Dandekar. They left us impressed with their wedding pictures. Newlyweds couple gave us a sneak peek into their big day. A few days after their wedding, Dandekar showed off her new tattoo which has an Akhtar connection.

Earlier Dandekar had tattooed Farhan Akhtar’s name on her neck but post their wedding, she got her wedding date tattooed on her arms. Dandekar chose the date to be written in Roman numerals for the tattoo. The tattoo read, “XXI-II-XXII”. Dandekar and Akhtar registered their marriage on February 21.

Have a look at her previous tattoo here: 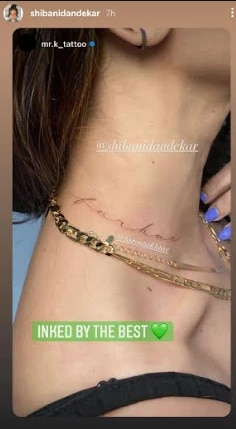 Farhan Akhtar and Shibani Dandekar’s wedding took place at Javed Akhtar and Shabana Azmi's Khandala farmhouse on February 19. The two even threw a bash in the residence of their good friend Ritesh Sidhwani. The who's who of Bollywood was present to attend the party.