Over the past hundred years, since war memorials became popular globally, their purpose and significance have changed, from sites for triumphant nationalism to that of sombre reflection. ‘New’ India, though, seems to be in a hurry to return to the past.

More from Asad Ashraf
View All

A recent video, doing the rounds on social media, shows protestors climbing the Cenotaph at the National War Memorial in Ottawa, the capital of Canada. Another video shows people shouting “Freedom” while jumping off the Tomb of the Unknown Soldier there. People had gathered there to protest recent Covid-19 vaccine mandates.

The incident drew flak from the top Canadian military brass, the Chief of Defence Staff, and minister Anita Anand. She described the Tomb of the Unknown Soldier and National War Memorial as sacred sites. However, thousands of miles away, Indian Twitterati also reacted to it and said they were grateful their government wouldn’t allow such a thing to happen in India.

“Shocking and Disgraceful: Protesters in the Canadian capital danced on the tomb of Unknown soldiers and desecrated their National War Memorial. I am proud to live in India where something like this is unthinkable and can never happen,” wrote Dr Ashok Seth, Chairman, Fortis Escorts Heart Institute, on Twitter. “Every Indian has utmost respect, reverence and gratefulness to our soldiers who gave up their lives so that we live happily. Jai Hind,” he added in the same Twitter thread. 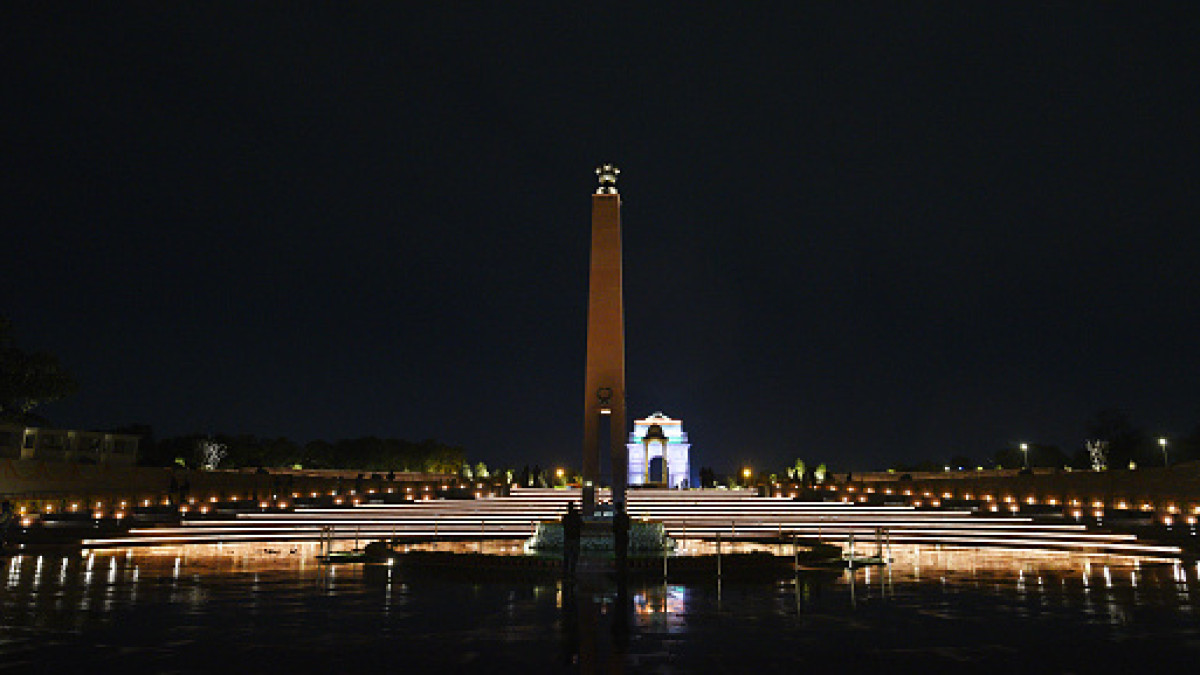 Meanwhile, Indian Prime Minister Narendra Modi urged Indians to visit our own National War Memorial with their families on his 85th Mann ki Baat radio show. “Some veterans wrote to me that Amar Jawan Jyoti is a symbol of their sacrifice. We have seen that the Amar Jawan Jyoti near India Gate and the eternal flame at the National War Memorial have been merged into one. On this emotional moment, many countrymen and families of martyrs had tears in their eyes,” the PM said.

Inaugurated in 2019, India’s National War Memorial was in the news recently after the decision of the authorities to ‘merge’ the “eternal flame” at Amar Jawan Jyoti near India Gate with the one at the new memorial, which has details of soldiers who sacrificed their lives in wars since independence.

The decision to merge the flames by extinguishing the one at Amar Jawan Jyoti has not gone down well with the Opposition. They accuse the government of betraying soldiers who lost their lives in the 1971 India-Pakistan war that led to the formation of Bangladesh.

Amar Jawan Jyoti was established in 1972 to commemorate India’s victory over Pakistan in the 1971 war. The then-PM Indira Gandhi inaugurated it on Republic Day in 1972. The perpetual flame at Amar Jawan Jyoti beneath India Gate in central Delhi symbolised the nation’s homage to troops who died in numerous wars and conflicts for the country. The flame was kept burning continuously for the past 50 years.

Politics Of Identity: Why It Works and Why It Doesn’t

Talking to Outlook, former Air Vice Marshal Kapil Kak recalled the history of war memorials and the politics surrounding these. “Several communities and nations started building war memorials after the First World War. However, sentiments and emotions surrounding war memorials have evolved over the years. Initially seen as celebratory structures, they are now understood as tributes to soldiers who lost their lives in war and conflicts,” explained Kak.

Discussions over constructing a war memorial in India were around since 1961, but it was approved for construction only in 2015, a year after the Modi government came to power.

Commenting on the emotional appeal of war memorials and the prevalent political discourse in India, the former Air Vice Marshal asserted that war memorials conventionally denote the soldiers’ sacrifice for the nation, to connect with an emotional chord in the masses by evoking national pride, military courage and nationalism. Nevertheless, he noted, the India’s ruling dispensation is engaging in more visible politics around military symbols than any in the past.

“A war memorial, through physical structures, often arouses national pride and military valour among countrymen. It reminds the people of the sacrifices made by soldiers to protect the motherland, and there is nothing wrong with it. Also, this is a global phenomenon and not confined to India. However, the current political dispensation in India wants to spearhead a new thought that combines both militarism and muscularity,” Kak said.

“One doesn’t understand why the two flames—one at Amar Jawan Jyoti, the other at the National War Museum—couldn’t burn simultaneously,” he added, accusing BJP of appropriating Netaji Subhash Chandra Bose, a Congressman for most of his life.

“This entire notion of setting up a hologram of Netaji Subhash Chandra Bose—who was a Congressman for most of his life—under the canopy, looks like an attempt to appropriate and use him as a new icon for the ruling dispensation, to project its muscular militaristic approach to nationalism,” he further added.

He also expressed solidarity with families praying at the Amar Jawan Jyoti in memory of their near and dear ones who lost their lives in the 1971 war with Pakistan. 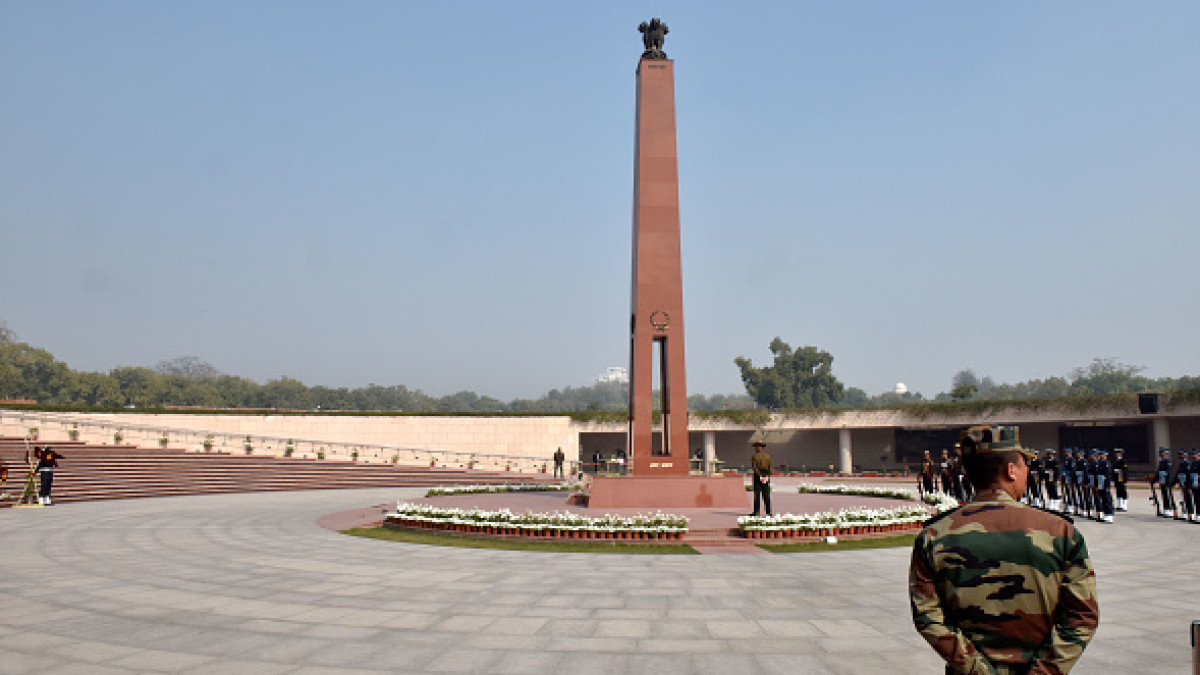 In a research paper titled “War Memorial as Political Memory”, scholar James Mayo argues that sentiment, utility, social purpose and historical interpretations all contribute to the definition of war memorials. Honour and humanitarianism are exclusively sacred in memorials, although social goals of identification and service can be used to communicate sacred and non-sacred attitudes for war memories. When physical surroundings, emotional expressions and social purposes are united in memorials, war memory becomes a part of everyday life or a celebration of the past.

More recently, the government of India has also emphasised building memorials of war in the form of statues, hospitals and schools in conflict zones. On February 1, 2020, the Indian Army and Assam Rifles unveiled “Veer Smriti”, a “combined” memorial in Nagaland’s Mokokchung, to commemorate the lives of 357 soldiers lost in counter-insurgency operations. In a written statement, the Assam Rifles said, “It was vital to have a memorial that was appropriate of the supreme sacrifice made by our troops in uniform, and that also stands as a light of motivation for future generations in the state and country”.

A part of the Naga intelligentsia had issued angry objections to this. Several Naga writers and professors signed a statement, stating, “We are surprised and offended by this calculative insensitivity”. They saw it as a violation of the peace accord signed between Naga armed groups and the government of India.

The Kashmir administration has also recently announced that its council met under the chairmanship of Lieutenant-Governor Manoj Sinha and approved a move to rename schools, roads and buildings after “martyrs and eminent persons”, as part of the Indian government’s Azadi Ka Amrit Mahotsav initiative, to commemorate the country’s 75th anniversary of independence.

Commenting on the need and intent to create war memorials in conflict zones, Dhananjay Tripathi, a faculty of International Relations at South Asian University, New Delhi said it boosts the morale of soldiers stationed there. Also, it is an attempt to change the political narrative of the conflict.

“War memorials are a national symbol for any country. When we imagine a nation, the nation’s defense is of paramount importance—at times even considered sacred. So the sacrifice of soldiers are consistently praised and, at times, even worshipped. So naturally, this boosts the morale of soldiers stationed in conflict zones,” Tripathi says.

In a recent column for a newspaper, ex-Army veteran Sushant Singh, a senior fellow at the Centre for Policy Research, stated that the Indian Army has a complex legacy and needs to accept and live with it. One should celebrate the bravery and sacrifices of Indian soldiers, whether they fought under the British, the Mughals or the Azad Hind Fauj. A modern India has to be expansive enough to honour all those fallen in battle.

“Any politics that tries to deal with the complex legacy of India’s army simply diminishes and undermines India. It gives us a moment to reflect on the real purpose of war memorials in the 21st century. When war monuments were first built after World War I, it was a different world, with another set of values and norms. Unless afflicted by insecurities of parochial nationalism, modern societies scarcely celebrate wars. Instead, remembering wars are moments of reflection about losses and the subsequent pain that society had to undergo because of the conflict. India claims to be the land of Buddha and Gandhi, and can afford to glorify peace now,” he had written in the column for Deccan Herald.

When Outlook contacted him to comment on the ongoing tussle around the National War Memorial, Sushant maintained that he stands by what he had written.