Throughout his awe-inspiring stint in theatre and cinema, K Balachander has told stories that would be considered brave even by today's standards, but always found a way to make them commercially viable. One of those stories gave actor Rajinikanth his name. Part 14 of 'Sands of Time' delves into the life and times of K Balachander.

There is an anecdote a film buff friend likes to tell during our nightly chats on cinema and other similar vices. He had a colleague, a Tamilian who happened to be at a soiree attended by Mani Ratnam and AR Rahman. As these two legends, film fans themselves, turned into excited teenagers talking about a certain K Balachander, a bystander wondered what the fuss was all about. He asked this friend of my friend if he knows who these gentlemen were talking about. Our man said with a lot of flourish, “Of course! It’s K. Balachander. He is like the Yash Chopra of Tamil cinema.” Mani Ratnam is said to have taken umbrage to this lopsided comparison. Balachander is not to be compared with anyone else, he said. That man stands on his own.

As a child, Kailasam Balachander was so passionate about watching films that he rode a bicycle for over 12 kilometres to the nearest town, which had the only cinema hall he had access to. There was something about flickering images dancing around on the screen that captured his imagination. Driven by an urge to tell stories of his own, he turned to the only medium accessible to him at the time: plays. Balachander used to stage popular plays at home engaging the other kids as actors, with him doubling as a director. As he advanced in years, Balachander started writing plays of his own. During his university days at Allamalai, he staged many of his own plays and acted in them as well. This obsession carried on to his stint at the Accountant General’s office where he found employment. He set up an amateur theatre group there as well. Some of his creations made history, such as Server Sundaram and Major Chandrakanth. Both of these plays found their way to the big screen much before Balachander himself graduated to film directing.

Phani Majumdar made a Hindi movie adaptation of Major Chandrakanth called Oonche Log (1965). It was a powerful story about a blind army major harbouring a fugitive in his house, a man who was on the run after killing the major’s own son. In Oonche Log, Ashok Kumar played the blind Major Chandrakanth while his son Rajinikanth was played by Feroz Khan, a character and a name which was to attain great significance for film lovers of the Indian subcontinent. Soon, Balachander’s playwriting skills were noticed and he started writing professionally. It was the great MG Ramachandran, aka MGR, who hired him to write dialogues for his film Deiva Thaai (1964). Within a year, KB Sir (as the Tamil film industry came to know him) directed his first film, Neerkumizhi (1965), adapted from a play written by him. Balachander was incredibly prolific even in his first decade, during which he made over 25 films, including a cinematic adaptation of his own Major Chandrakanth. Between the 70s to the 90s, Indian cinema was populated by women characters who were either sex objects or walking-talking doormats, not only gleefully accepting but celebrating the sati-savitri stereotype. In this era, there were but a handful of filmmakers who bucked this trend. K Balachander was definitely one of them. His filmography is filled with women of blood, flesh and bones who were central to the narrative. 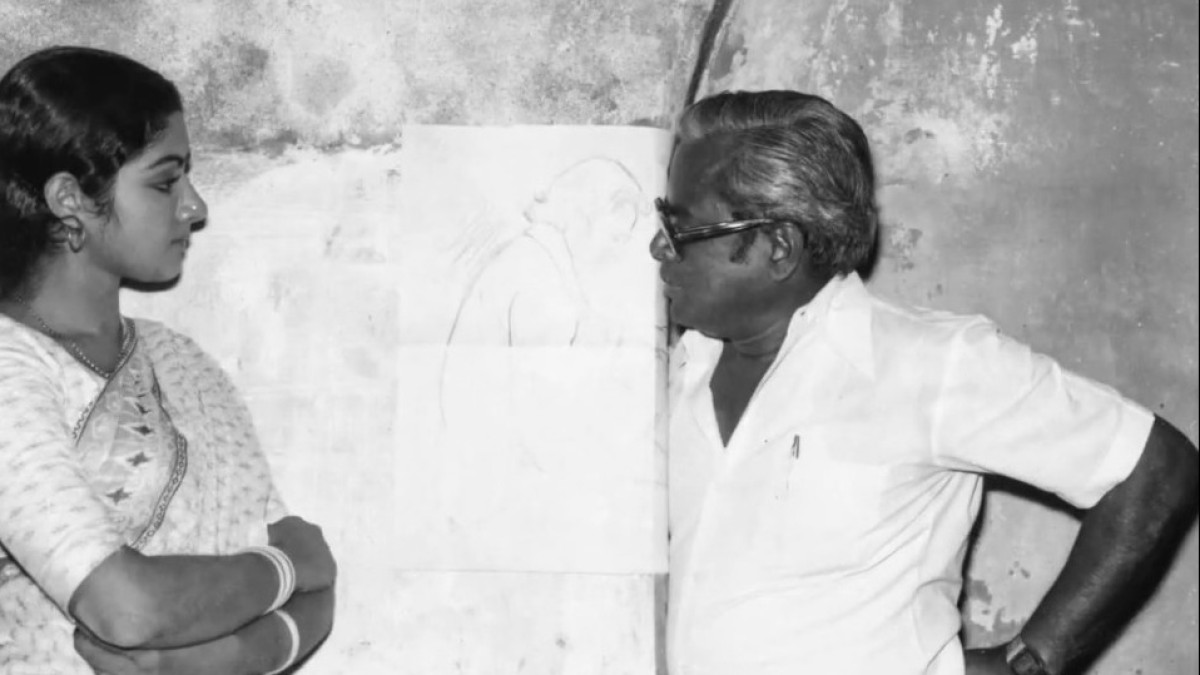 One such film was Arangetram (1973), about a woman who took to prostitution to put food on the table for her ever-hungry family. But later when they are made aware of her “indignity”, they - including her brother who she put through medical school - turn their backs on her. While the protagonist was played by Prameela, Balachander brought in a young actor to play the evil brother. This 19-year-old had already made waves in the industry when he was all of six, by winning a President’s Gold Medal for his heartwarming performance as a child actor in Kalathur Kannamma (1960). As he grew older, Kamal Hassan started assisting the choreographer Thangappan. And when master Thangappan himself took up the director’s mantle for Ammai Vallankanni (1971), Kamal not only assisted him in directing but also played a cameo as...Jesus Christ.

After a plethora of such uncredited cameos, along came Balachander to cast him in Arangetram, followed by another negative role in Sollathaan Ninaikkiren (1973), and an interesting supporting role in Aval Oru Thodar Kathai (1974). The latter contains echoes of Ritwik Ghatak’s seminal Meghe Dhaka Tara (1960) about an ill-fated woman who sacrifices everything for the family she is doomed to “provide for” - a recurring theme in KB’s movies. Kamal Hassan’s proverbial moment in the sun came with Apoorva Raagangal (1975), in which Balachander pitted him with another young man he had just discovered.

On a chance meeting with Balachander on campus, Shivaji Rao Gaekwad expressed his desire to work for him. At the time, Shivaji could speak Kannada, but not a lot of Tamil, the language Balachander made his films in. KB was struck by the boy’s features and the way he conducted himself. He asked Shivaji Rao to learn Tamil. Shivaji went back to Bangalore, practised with his friend Raja Bhadar who was a native Tamil speaker, and was back in twenty days flat, fluently speaking the language. KB was suitably impressed and cast him for his upcoming film Apoorva Raagangal(1975). But he had to rechristen Shivaji, for obvious reasons. He named him after a character from his aforementioned play/ film Major Chandrakanth. In the Hindi version Oonche Log, the role was played by Feroz Khan. The name was Rajinikanth. (Yes. Rajinikanth was named after a role which was played by Feroz Khan. The irony is staggering.) In Apoorva Raagangal, Kamal Hassan was obsessed with an older woman and Rajinikanth was the ex-husband of said woman. It had a complex plot, allowing these new actors a lot to sink their teeth in.

KB was about to launch his next film, which was a remake of the Telugu film O Seeta Katha (1974), a unique revenge drama. For the lead, he was looking to launch a new heroine. It was during this time that a child actress called Sridevi caught his attention. He ended up casting the teenager as the female lead in Moondru Mudichu (1976). This turned out to be one of the most noteworthy roles in her entire career, showing us a glimmer of what she was capable of. What Sridevi achieved in that film, big bad Bollywood was rarely able to accomplish with all her histrionics. 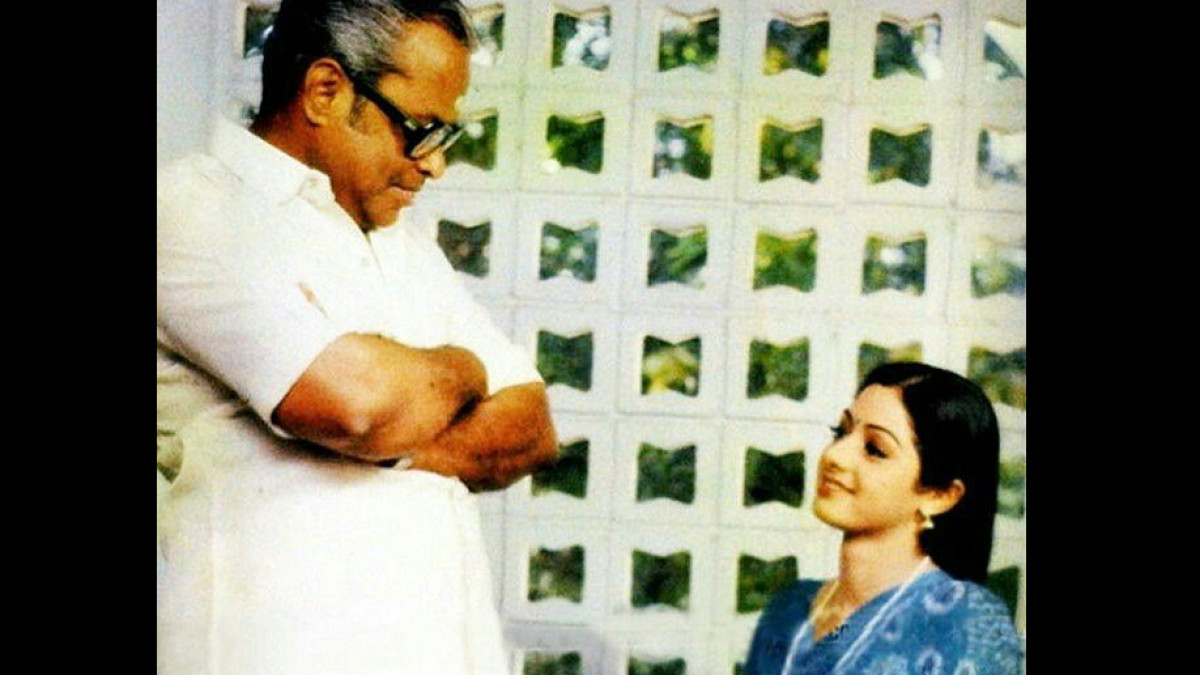 Sridevi with her mentor K Balachander

Selvi (Sridevi) is in a relationship with Balaji (Kamal Hassan), but his shady friend and roommate Prasad (Rajinikanth) has a roving eye, always trying to act fresh with her when he is not around. Selvi tries to warn Balaji but he ignores her since Prasad seems perfectly amiable in his presence. Prasad also sleeps around with other women, often taking advantage of their weaknesses. Selvi knows this but she’s helpless as Balaji won’t hear a word against his friend. When they decide to go for a boating trip on the lake, Balaji invites Prasad, if only to demonstrate that he could be trusted. In a display of sheer brutality, Prasad throws his friend off the boat, knowing full well that he can’t swim. Selvi watches in horror as her lover drowns before her eyes as the vile Prasad looks on.

In an attempt to pick up the pieces of her life, Selvi accepts a position as a governess in a mansion where an elderly widower (N.Vishwanathan aka “Calcutta” Vishwanathan) lives with his young children. When his eldest son comes visiting, she discovers to her shock that he is Prasad. Burning with rage and an all-consuming desire to avenge her lover, Selvi convinces the elderly man to marry her instead. She not only becomes the lady of the house, but a stepmother to the man who went to extreme lengths to seduce her. She rubs it in every time they encounter each other, insisting that he call her mother. It was the ultimate revenge. And thus, in her very first outing as a heroine, Sridevi ended up playing Rajinikanth’s stepmother. Just take a second let it sink in.

These fascinating stories featuring formidable women in the lead were all cooked up by the keen mind Balachander possessed. All this while, his south Indian films continued to be remade in Hindi. Mehmood’s Main Sunder Hoon (1971) and Lakhon Me Ek were tamer retellings of Server Sundaram (1964) and Ethir Neechal (1968), while Teen Bahuraniyan (1968) was remade from Bama Vijayam (1967). Haar Jeet (1972) was fashioned after Thamarai Nenjam (1968). Eventually, KB decided to remake his own films for Bollywood, beginning with Arangetram, which he remade into Aaina (1977), starring Rajesh Khanna and Mumtaz. But it was the remake of his Telugu film Maro Charitra (1978) that really brought him to the attention of the average Hindi film viewer. Maro Charitra featured a Tamil boy (Kamal Hassan) falling for a Telugu girl (Saritha), but their families refuse to allow the match due to cultural differences. KB reimagined it in Hindi as Ek Duuje Ke Liye (1981), which remains a Bollywood classic, and went on to win a National Film Award. He followed it up with Ek Nayi Paheli (Apoorva Raagangal) and Zara Si Zindagi (Varumayin Neram Sivappu) for which he collaborated with Gulzar. In the latter, there was a genuine attempt to transpose the idea to north India, and the Bharatiyar-quoting intellectual from the original becomes a Kabir and Ghalib-spouting rebel.

There were some scenes entirely rewritten for the Hindi version, which didn’t even exist in the original Tamil film. While a rather competent film in its own right, Zara Si Zindagi didn’t get even close to the kind of success Ek Duuje Ke Liye witnessed. But that didn’t matter. KB continued to make popular films with unconventional storylines in Tamil, attaining a legendary status and became a veritable institution in Tamil cinema.

Tamil cinema lovers like to say that it never had a strong arthouse tradition. But while sticking to the tried and tested ambit of popular cinema, K Balachander continued to push the envelope by telling stories that challenged convention and prevailing cultural mores. And in that, he stands tall.