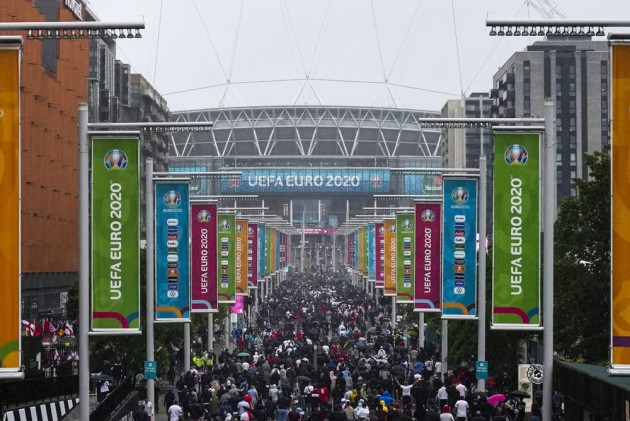 After eight round of 16 matches, with extra-time settling three of those and one needing a penalty shoot-out, eight teams have progressed to the quarter-finals of UEFA Euro 2020. (More Football News)

In the first knock-out, Denmark produced a clinical performance to blank Wales 4-0 in Amsterdam, then Italy conceded their first goal of the campaign before surviving an extra-time humdinger against Austria in London, 2-1.

In the first shock of the tournament, Czech Republic stunned 10-man Netherlands 2-0 after Matthijs de Ligt was sent off for a deliberate handball in Budapest. Then a clash of heavyweights in Seville witnessed Thorgan Hazard, younger brother Real Madrid star Eden stealing the thunder to send Cristiano Ronaldo's defending champions Portugal packing.

But it was only the warm-up. On a crazy Monday, Spain escaped with a 5-3 win over Croatia after leading 3-1 in the normal time. Ronaldo's Juventus team-mate Alvaro Morata, who got threats, making amends for his misses with a 100th-minute goal. Three minutes later, Mikel Oyarzabal buried one to settle the issue in Copenhagen.

Then came the mother of all shocks. World champions France conceded an early goal, then make it a 3-1 lead with Karim Benzema and Paul Pogba scoring for Le Bleus even as Switzerland missed a penalty. With nine minutes left in the regulation time, Haris Seferovic got his second to make it 2-3. Mario Gavranovic, coming in for Xherdan Shaqiri, forced an extra-time in Bucharest with a 90th-minute goal. After 30 minutes of stalemate, the tie was decided by a Yann Sommer blocked against Kylian Mbappe penalty in the shoot-out.

On the final night of round of 16, England ended their 55-year wait to beat Germany in a tournament knock-out in front of a boisterous Wembley crowd with Raheem Sterling and Harry scoring in a 2-0 win. Hours later, at Hampden Park, Ukraine shocked Sweden with a very late extra-time winner.

Surprisingly, none of the teams from the so-called Group of Death survived. France, Germany and Portugal were knocked out; while Hungary failed to make the last 16.

Group A, B and D still have two teams each left in the competition -- Italy and Switzerland, Belgium and Denmark, and England and Czech Republic respectively; while Group C and E have one each Ukraine and Spain respectively.

So, who play whom in the quarter-finals

All matches will be telecast live on Sony Sports Network. Live streaming will be available on SonyLIV.