Italy have been drawn in Group A for Euro 2020, along with Turkey, Wales and Switzerland. Here's Azzurri preview 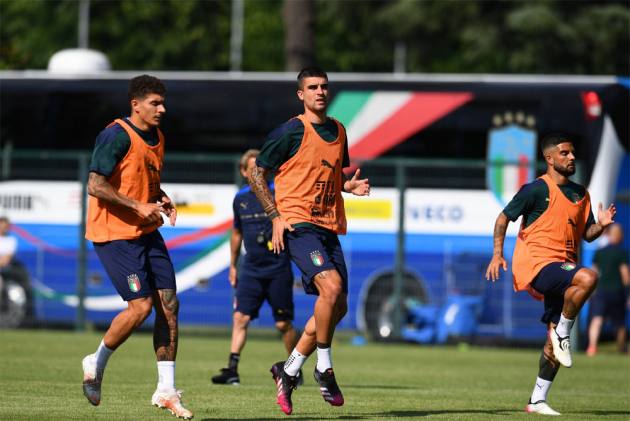 Four-time world champions Italy are not the hot favourites for the rescheduled EURO 2020, but they are crrently on a 26-match unbeaten run — the second-longest streak in the team’s history, trailing only a 30-match stretch from 1935-39 under Vittorio Pozzo. (More Football News | Final Team)

In three years, Azzurri have gone from failing to qualify for the FIFA World Cup to a perfect qualifying campaign for the 2020 European Championship. It’s a transformation that came sooner than expected under coach Roberto Mancini, who has found the right mix of younger players and veterans to create optimism around a team that had lost all of their confidence.

Italy are in Group A along with Switzerland, Turkey and Wales. They have the honor of hosting the tournament’s opening match against Turkey on June 11 at the Stadio Olimpico in Rome. Then, Mancini's men take on Switzerland on June 16 and Wales on June 20.

In the current form, they should top the group. Italy’s only European Championship title came in 1968. And Mancini believes Italy can aim for the title, which would provide relief for one of the countries hardest hit by the coronavirus pandemic.

“We want to provide a reason for the entire nation to celebrate,” Mancini said, “especially considering what we’ve been through over the last year and a half.”

Should Italy win Group A, they will take on the runners-up from Group C, containing the Netherlands, Ukraine, Austria and North Macedonia.

While alternating center forwards Ciro Immobile and Andrea Belotti are supposed to take care of the scoring, Italy’s strength is their large group of diminutive but highly effective wingers and midfielders.

Left winger Lorenzo Insigne is considered Italy’s most talented player and his lack of use during the failed qualifying campaign for the 2018 World Cup — especially when he was benched during the playoff loss to Sweden — irked fans to no end.

On the other wing, there’s Federico Chiesa, the son of former Italy striker Enrico Chiesa, while Federico Bernardeschi remains another strong option in attack.

Then in midfield there are endless options with Nicolo Barella, Jorginho, Manuel Locatelli, Lorenzo Pellegrini and Matteo Pessina — plus Marco Verratti and Stefano Sensi, injuries permitting.

Insigne, Verratti, Sensi, Barella and Chiesa all stand 5-foot-9 (1.75 meters) or under.

Captain Giorgio Chiellini and Bonucci are the only members of the team with more than 100 appearances. No other players called up have even made 50 appearances.

What’s more is that both Chiellini and Bonucci remain starters in defense, although they now have reliable backups in cancer survivor Francesco Acerbi, Gianluca Mancini and Alessandro Bastoni — who have established themselves at Lazio, Roma and Inter, respectively.

Besides Buffon, the biggest name missing is that of Mario Balotelli. Now 30, the striker who led Italy to the Euro 2012 final plays for Monza in Serie B after a series of on- and off-the-field problems.

After years away from the national team, Balotelli was called up when Mancini was first hired in 2018 but then lost his way again.

“I was hoping that he would feel pride in showing that he could return to being the player that he showed he can be,” Mancini said. “Unfortunately, though, Mario didn’t do much to return to his top level. And that remains a big disappointment.”

Another key player missing is 21-year-old midfielder Nicolo Zaniolo, who tore ligaments in both knees in separate injuries last year and is still recovering.

Italy was hard hit by the coronavirus. And Azzurri were no different. Mancini had to coach games remotely in November when he was under quarantine after testing positive for COVID-19, even though he was asymptomatic.

Newly hired assistant Daniele De Rossi was hospitalized for more than a month with pneumonia symptoms after he was one of four staff members who contracted the virus during World Cup qualifying matches in March.

Several players have also struggled with COVID-19, notably Verratti, who tested positive in both January and April. Verratti then injured his right knee in early May but team physicians believe he can return during the tournament.