The first time you travel solo is always a special memory. Back in 2003, I packed my bags to go and stay in a log cabin in Darjeeling. The trip was full of surprises.

2003. I was a city reporter in Calcutta when the travel bug first hit me. I had to venture on a completely unescorted, solo trip. Other than work trips within the range of a hundred kilometers going somewhere for nothing but fun was till then, out of question.

But where would I explore my sense of freedom and stretch my wings? I decided to go to Darjeeling - the hill top beauty that crowns Bengal and which I had always heard stories of. A friend’s father who was posted in the hill station as a bureaucrat, had just vacated his accommodation. The house was still empty as the new district magistrate had still not moved in. Which meant, that I could live in the log house by myself, at least for a week. This was also the first time I was visiting a hill station ever. 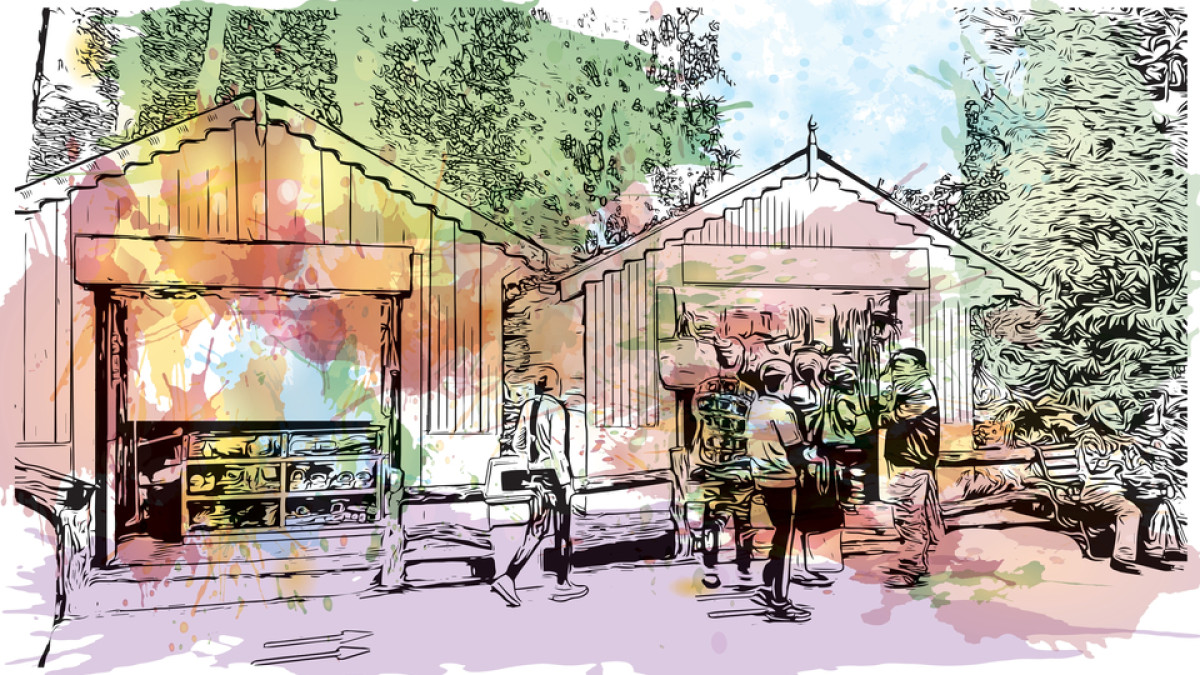 So, I took a train to New Jalpaiguri and then hopped on to a range rover service that took through a sharp mountain drive to Darjeeling. The sharp hairpin curves of the hill drive was gut wrenching initially.

Finally, the vehicle took us to Darjeeling. It was an April morning and there still a nip in the air by afternoon. A porter approached and asked where I wanted to go. Tulip Terrace, I said.

That is everything I was told by my friend and I also was told that I should go to the bungalow of an official and pick up the keys for Tulip Terrace which was to be my address for the week. The porter somehow managed to find the house.

It was right next to a cliff and at a distance, a bunch of school kids were playing in the playground.

I dropped by luggage at the gate. There was no soul around and called my friend who said that the keys were waiting for me. I walked up to the other house where I was supposed to pick my keys, the person there asked me my name and happily gave me the key and introduced me to a guard named Sanjay.

Sanjay was from Nepal but had settled in Darjeeling he told me on the way to Tulip Terrace.

Bali Opens its Doors to Foreign Travellers from February 4

My Vegan Holidays: Travellers and Adventurers Share Their Tips, Hacks and Stories

He unlocked the main door and there I walked into a sprawling bungalow. There was a drawing room with a fireplace which seemed to have been unused for years.

Then he took me inside and showed the bed room which was right at the end of the house. It had glass windows through which sun was streaming into the room. The bed was clean and covered with a white bedsheet. The wooden floor was covered with a wall to wall green carpet. However everytime I would step, there would be a hollow thud.

There was a small door on the opposite end which was locked. I was quickly informed that the house did not have a functional water heating system or a kitchen, but warm water for drinking will be supplied by Sanjay every morning. Thus giving me this brief, Sanjay vanished. It was already around 3pm and I decided to change into fresh clothes and then go and check out the mall.

I was also very hungry. At the mall, I checked all the curio shops selling jewellery, scarves and masks. It was fascinating. I walked a bit ahead and discovered a Glenary’s. I ordered some food and a pot of Darjeeling tea. Through the windows the sun drenched mountains were making a picturesque view. I do not remember how many refills of tea I had asked for, taken in by the beauty of the valley below. The hillside slowly lit up like a cluster of stars. I decided to get back to Tulip Terrace. It was past seven and it was dark. All shops had shut down there was nothing in the mall area except for a few people talking loudly to each other near a shop with half its shutter down.

They were speaking the local language. And then I froze. I could not recognise the road I had to take to get back to the bungalow. I had picked two paranthas from a shop next to Glenary’s which was going to be my dinner.

With nothing but my gut feeling as a map and radar, I took off on a lane which I thought should lead me back. With a vague recollection, I started walking down a lane which seemed familiar and then quickly, I discovered it was a wrong route. I walked back to the main road again. 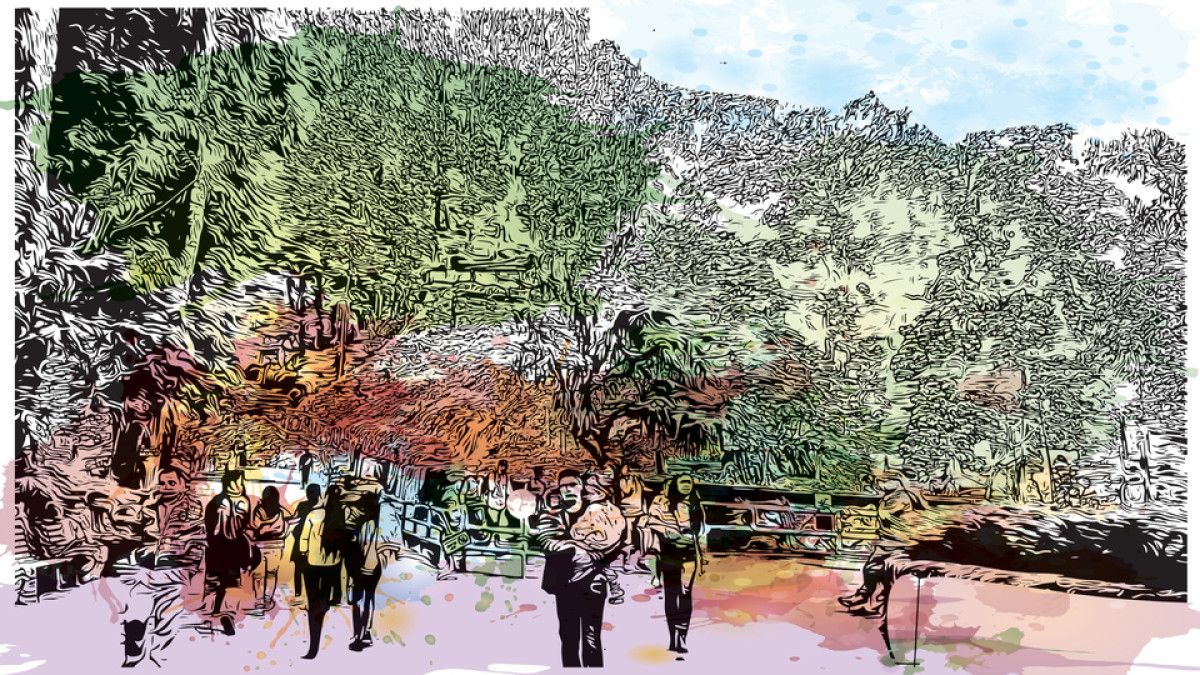 As I tried to figure out the right way, I heard a whirl of motorcycles. A group of local boys started following me as I walked. At this point I felt a little scared. Anyway, they said something to each other which I could not understand and then speeded off. A strong wind had started blowing by then. The road was pitch-dark and there was no sign of Tulip Terrace.

After sometime I finally found the fork that I realised would take me to the bungalow. The place looked nothing like how it looked at 3pm. It was silent. The school was shut obviously. I unlocked the door and switched on the lights. Locked the door behind and went straight to the bedroom. It was very cold and there was also no room heating. I quickly ate the paranthas. And got under the quilt.

Just when I thought that I was finally safe, something else started. I caught some strange noise, from the other side of the locked door. Something, like approaching footsteps and then as if the feet were crushing dry leaves under them. I thought I would faint. What if the door burst open and some unnatural creature walked right into my bedroom.

On the outside there was a raging storm. The tall deodars were swaying wildly and the wind rustling through the leaves was making a strange orchestra combined with a drunken brawl between a two men, which was floating into the air and blending in. I had no prayers to pray and such a situation. I left the lights on and don’t know how or when, went off to sleep.

In the morning, I heard the doorbell. I was happy to find myself alive after the nightmare of the previous night. I went to the zoo. There was Sanjay. Dutifully reporting to work with a bottle of hot water. I thanked him and then he asked me how my day went and if everything was okay. I just casually threw him a question — everything was fine Sanjay, but at night, I heard this strange noise opposite my bedroom as if someone was walking right outside it. What could it be?

"Oh it was me madam. My room is on the other side. I came to eat dinner before going back for my night duty at the ADM’s house..."

I have felt scared many times while travelling solo afterwards, but never as much as how I felt at the Tulip Terrace.