How an ecclesiastical hymn, sung with different versions in various parts of the world, became the anthem of Bangladesh cricket.

The International Mother Language Day is celebrated worldwide in commemoration of Bangladesh's epic Liberation War triumph in 1971 for their people's uncompromising fight to protect their native language of Bengali. (More Cricket News)

After the birth of the South Asian nation following its independence from Pakistan, the Bangladesh government chose a song that was also penned and composed by the writer of India's national anthem and the first non-European recipient of the Nobel Prize for Literature, Rabindranath Tagore.

Interestingly, even though Tagore's "Amar Sonar Bangla" (My Golden Bengal) has been instilling conviction and generating patriotism as the national anthem of Bangladesh for half a century, the country's national team cricketers have additionally embraced another Bengali song as their victory anthem.

The translated Bengali song of "Amra Korbo Joy" (We Shall Overcome) had once again gone viral after the Bangladesh cricket team's historic maiden win against New Zealand at Mount Maunganui in January this year. The viral video of celebrations captured inside the Bangladesh dressing room showed the cricketers relishing the moment of glory with "Amar Korbo Joy" on their lips.

As its English translation read, the song too is a literal translation of the eponymous English anthem popularised worldwide by American troubadour and activist Pete Seeger. Hailed as the "most powerful song of the twentieth century" by the Library of Congress in the US, Pete Seeger's "We shall overcome" was not only a chartbuster gospel song but an emotion of thousands of racially discriminated, disenfranchised and racially segregated African Americans in the US who made it an anthem of the American civil rights movement.

The song subsequently spread its wings to lend voice to protests for rights across the globe, including the Northern Ireland Civil Rights movement (1968-1978), the Velvet Revolution in Prague, and the student protests in Tiananmen Square in Beijing in 1989.

A Passage To India From US

If Pete Seeger rephrased the song, known for its long history of undergoing evolutions and modifications, by inserting "shall" in place of "will" to its present form from its erstwhile version of "We'll overcome" and performed to an august audience that included Martin Luther King, Jr. and Rosa Parks, among others at the Highlander Folk School in Tennessee in 1956, an inimitable Joan Baez blew people's mind with her power-packed rendition of "We shall overcome" at the Lincoln Memorial during A Philip Randolph's 1963 March on Washington, the same event at which Martin Luther King, Jr. gave his historic "I Have A Dream" speech.

In the swinging sixties, Seeger had visited Kolkata as a tourist, but his mesmerizing live gig at the Park Circus Maidan in 1963, swayed a generation of Bengalis and etched an indelible mark in Bengal's contemporary music. Seeger's singalong style of the soul-stirring subaltern psalm of "We shall overcome" stood out in India's politically vibrant cultural capital pregnant with a carefree Communist soul and a rebel socialist spirit.

In 1965, one of eastern India's most prolific music maestros, Hemanga Biswas, created the near-perfect Bengali translation of "We shall overcome" – "Amra Korbo Joy." Interestingly, Biswas, who was born in Sylhet (now in Bangladesh) and later settled in Assam, was also credited to have translated the international anthem of the Communists, "The Internationale," from French and spiritedly adapted it to Bengali music as "Jago jago jago sorbohara" (Wake up, wake up, wake up, proletariat).

But Biswas's patriotism-evoking lyrics were taken to another level by his collaborator and one of the first and original singers of "Amra korbo joy," Bhupen Hazarika. The rich baritone of Hazarika, whose own Assamese and Bengali version of Paul Robeson's "Ol' Man River" became a cult classic in Assam, Bengal and Bangladesh, elevated "Amra korbo joy" as an anthem of activism, stirring nationalism and sub-nationalism in eastern India.

Historically, around the same time, Indian poet Girija Kumar Mathur translated the song in Hindi as "Hum honge kaamyab," which too became a popular song during the 1970s and 80s and made a cameo appearance as a background song in the iconic climax scenes of Kundan Shah's black comedy "Jaane Bhi Do Yaaro" in 1983.

Meanwhile, the song "Ek din surjer bhor" (One day the sun will rise), penned by eminent lyricist of the era Shibdash Bandyopadhyay and recorded by the Calcutta Youth Choir led by Ruma Guha Thakurta during the 1971 Bangladesh War of Independence, was another Bengali translated version of "We shall overcome" that gained some popularities with the original song's universal appeal and social messaging style.

Interestingly, Gana sangeet or mass music, sung en masse and chorally to mobilize the masses, was predominantly in vogue in Bengal in the 1960s and 70s, thanks to the Indian Communist movements and their cultural arms like the Indian Peoples' Theatre Association (IPTA) and its various offspring. "Amra korbo joy" was a perfect fit for such Gana sangeet groups or choirs.

Its peppy tune and powerful messaging eventually stood out as the song of hoi polloi, invading every household in West Bengal and, subsequently, Bangladesh. The invigorating song was wholeheartedly embraced by the rebellious Bengalis of then East Pakistan. Their fight was for the rights of the Bengali language, and "Amra korbo joy" readily became one of the cultural war cries against the language oppressors.

Once East Pakistan emerged as an independent nation of Bangladesh, spearheaded by Bangabandhu Sheikh Mujibur Rahman and aided by India, the erstwhile song of protests got readily transformed into an anthem of pride and triumph in the south Asian nation. "Amra korbo joy" has been ingrained in the ethos of Bangladesh since then. Their cricketers have been no exception.

With the erstwhile whipping boys of world cricket starting to win against the formidable sides, the cult song about the resolve and passion for overcoming all odds had entered the Bangladesh dressing room as the unofficial victory song in 2007 – the watershed year when they dumped a fancied Indian side out of the World Cup in the Caribbean.

However, the song came of age a decade later, in 2017, when Bangladesh scripted a slew of historic wins against some of their biggest rivals. The dream-coming-true victories made "Amra korbo joy" an apt anthem for the Bangladesh cricketers to celebrate those momentous occasions.

The song just caught on hogging the limelight. "Amra korbo joy" was hymned in the Bangladesh dressing room after they clinched a memorable win against Sri Lanka in their 100th Test in Colombo in March 2017. The Bangla Tigers once again brought the Seeger anthem to their lips during the ICC Champions Trophy in the English summer of 2017.

After holding their breath in a huddle to watch England edging out Australia in a thrilling tie and thus ensuring Bangladesh's qualification to the semi-final, the underdog country's cricketers broke into a celebration with "Amra korbo joy." 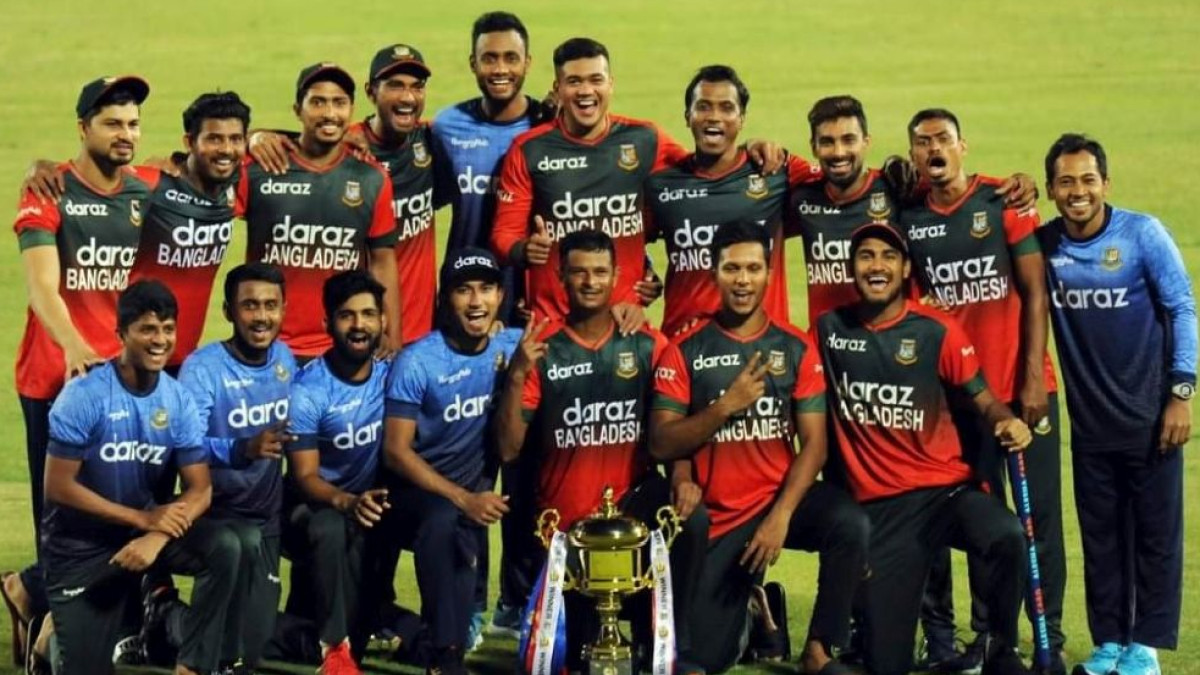 Amra Korbo Joy is a song sung by the Bangladesh cricketers after every success story. (Facebook)

Incidentally, it was Bangladesh's strike bowler Taskin Ahmed who emotionally started singing the popular song with his teammates jubilantly joining the chorus and enthusiastically singing the Bengali song aloud.

The cricketers then uploaded the video on Facebook, which acquired millions of hits, ahead of their semi-final clash against neighbours India. The victory didn't come against a superior Indian side in the much-anticipated semi-final, but the Bengali song showcasing the never-say-die attitude continued to stay on with Bangladesh cricket.

A couple of months later, Bangladesh cricketers catapulted "Amra korbo joy" to almost an anthem status when the erstwhile minnows of Test cricket earned a historic first victory in the five-day format over Australia in Dhaka in August 2017. It was Taskin again who had posted a video of his side's singing celebrations on his Facebook page even though he wasn't in the playing eleven. The viral video showed some of the Bangladesh cricketers were beating a bench with their bats while the rest of the team was belting out the song, profoundly expressing joy and enthusiasm for one of their biggest victories.

Last year, when the Bangla Tigers sensationally walloped the Australians to win the T20 home series, "Amra korbo joy" was not only sung by the men's team but also reportedly angered Aussie head coach Justin Langer after the viral video of the song was uploaded on the official website of Cricket Australia (CA).

Langer got into a heated exchange with a digital media operator of CA over the song. The Bangladesh women's team too joined the singing party as they exuberantly sang "Amra korbo joy" aloud in Harare, Zimbabwe, in November last year, after remarkably beating Pakistan to start their campaign in the World Cup Qualifiers on a resounding note.

But the opening week of this pandemic-stricken new year with renewing hopes saw the anthem being reverberated across the cricketing world after veteran wicket-keeper-batsman Mushfiqur Rahim, arguably the man who belted out the rendition of "Amra korbo joy" more than any of his compatriots from the Bangladesh cricket team, hit the winning boundary to accomplish a fairy-tale victory against the Black Caps last month, making the anthem music to the ears of cricket fans worldwide once again.

Nonetheless, music, as they say, is a language that transcends all barriers. And the song that was translated from an African American gospel with a striking similarity to the first four bars of the eighteenth-century Christian hymn of "O Sanctissima" from Italy has found a place in the hearts of a bunch of cricketers from a Bengali-speaking Islamic country in another part of the world, has emphatically manifested that universal spirit and global appeal.

(Suvam Pal is a media professional and a published author. Views are personal)