That's some bowling performance. Alzarri Joseph now holds the record for best bowling figures in IPL. And he used only 3.4 overs. David Warner, Vijay Shankar, Deepak Hooda, Rashid Khan, Bhuvneshwar Kumar and Siddarth Kaul were his victims. The previous best belonged to Sohail Tanvir. The Pakistan pacer took 6/14 for Rajasthan Royals against Chennai Super Kings in the inaugural edition of the tournament. 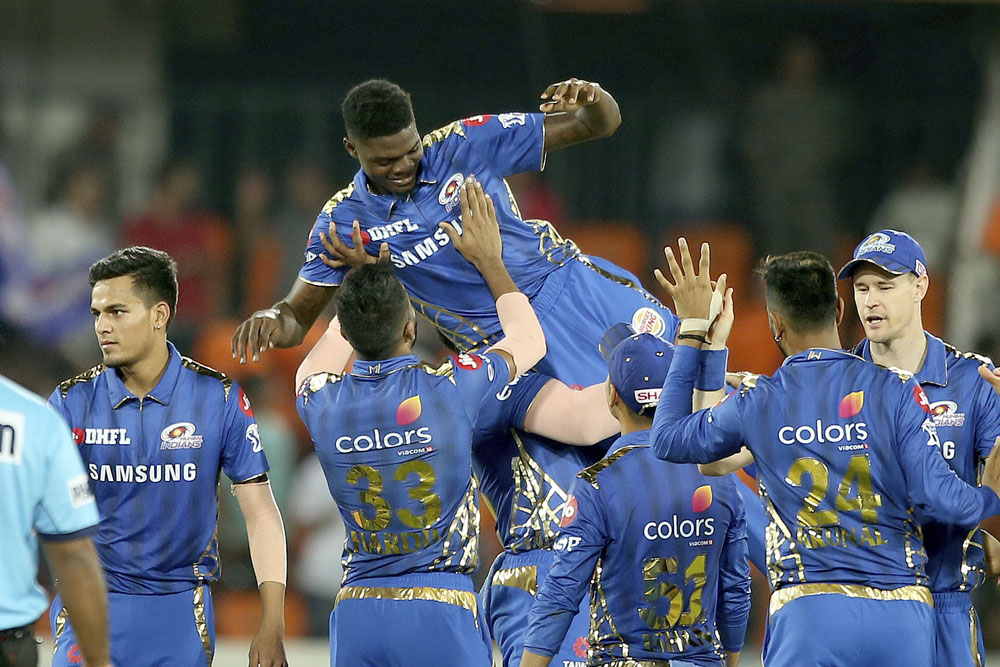 HERE's the list of top-five bowling figures in IPL.

Earlier, Keiron Pollard hammered an unbeaten 46 off 26 balls to help Mumbai post a fighting total of 136/7. Hyderabad were well on course to limit Mumbai to a sub-120 total before Pollard's brute power came to the fore and enabled the visitors to collect 39 crucial runs off the final 12 balls.

11:17 PM IST: And a four-for for debutant Alzarri Joseph and on a hat-trick. Sunrisers running out of wickets. Caught and bowled to dismiss Rashid Khan. Five runs and two wickets from his third over. SHR-89/7 after 16 overs. 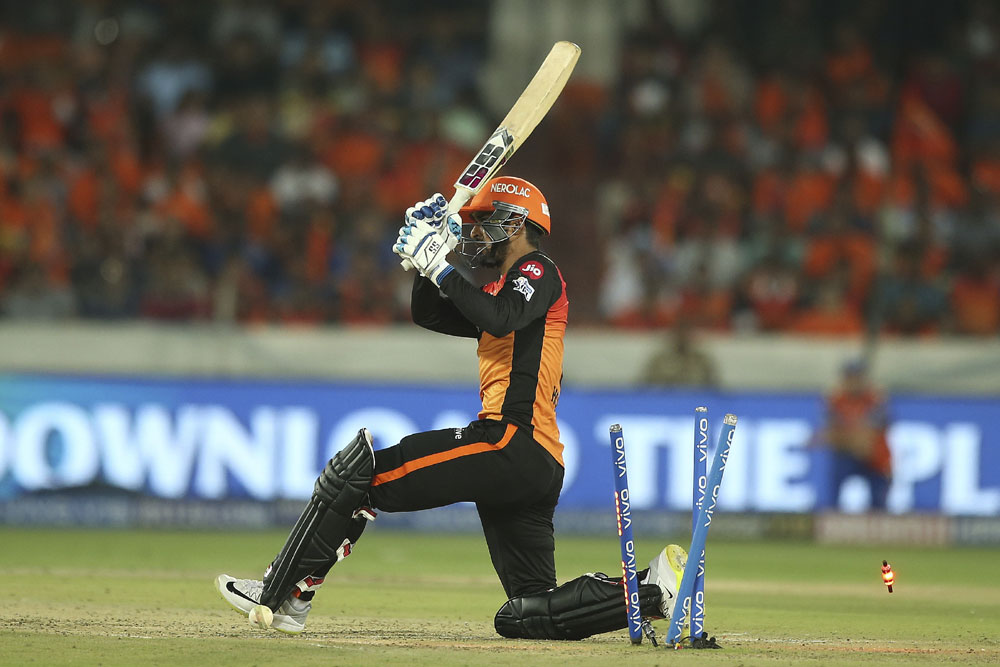 10:54 PM IST: This is becoming one-way traffic. Rahul Chahar had Yusuf Pathan (0 off 4) caught at deep square leg by Ishan Kishan. FoW-62/5 (11.2 Over). Top-edged and gone. New man Mohammad Nabi starts his innings with a four, off the third ball, to deep backward point. Seven runs and a wicket from the over. SHR-68/5 after 12 overs. They need 69 from 48. 21 runs and two wickets in the last four overs.

10:49 PM IST: Rohit Sharma pulls off a stunning catch at mid-wicket. Straight to him very powerfully but MI captain holds onto it. FoW-61/4 (10.3 Over). Manish Pandey out for 16 off 21. Yusuf Pathan is the new man for SRH. A wicket and two runs from Jason Behrendorff's third over. SHR-61/4 after 11 overs.

10:44 PM IST: After ten overs, Hyderabad are 59/3. Still need another 78 runs from f60 balls. Five runs from Krunal Pandya's second over. Manish Pandey and Deepak Hooda are unbeaten on 15 and six.

10:39 PM IST: Hardik Pandya concedes seven runs from his first over - a double, then five singles. SHR-54/3 after nine overs. They need another 83 runs from 66 balls. Time out.

10:35 PM IST: Krunal Pandya gets his first over. Tidy one, four singles. New SRH batsmen Manish Pandey and Deepak Hooda in the middle of rebuilding the innings. SHR-47/3. They need 90 runs from 72 balls.

10:26 PM IST: Rahul Chahar almost gets his second, but Kieron Pollard drops Vijay Shankar at long-off off the second ball. Too easy for the big man but slippery. Shankar then hits the fourth ball for a four. Six runs from the over. SRH-39/2 after six overs. 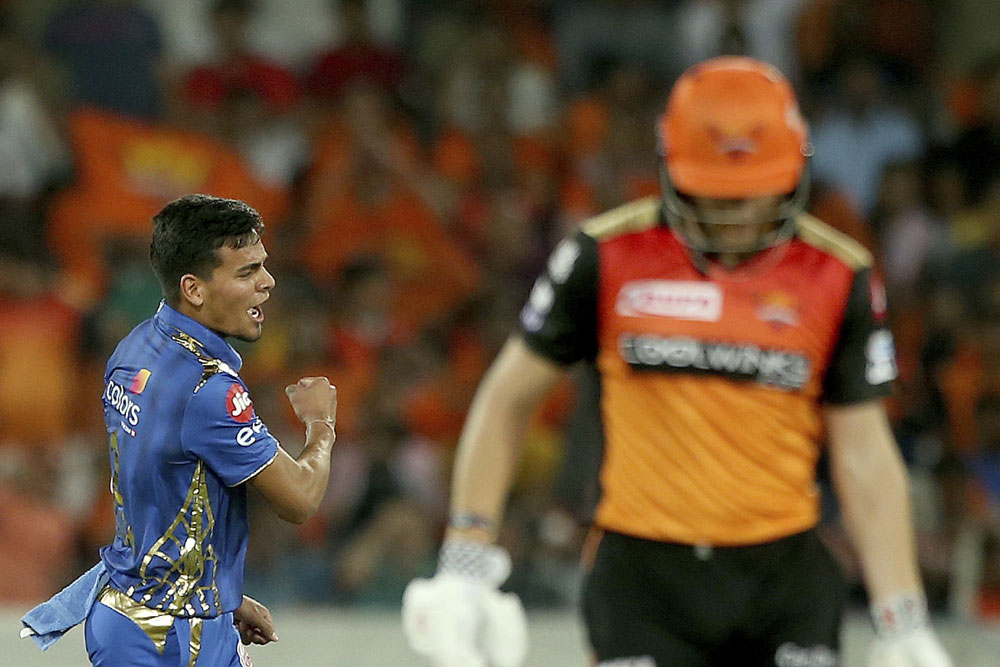 10:16 PM IST: Rahul Chahar strikes in his first over as Hyderabad lose first wicket in the power play for the first time this season. He had Jonny Bairstow caught by Jasprit Bumrah at short third man.  FoW-33/1 (3.4 Over).

10:12 PM IST: 13 runs from Jason Behrendorff's second over. Jonny Bairstow hits back-to-back fours after David Warner started the over with a four. SRH-27/0 after three overs. They need another 110 runs.

10:02 PM IST: Jason Behrendorff starts the proceedings. Eight runs from the over, including a four off the fifth ball, hit by Jonny Bairstow through cover.

9:43 PM IST: Bhuvneshwar Kumar starts the last over with a wide, down leg. A four over extra cover as Kieron Pollard continues to accumulate runs for MI. A dot ball, then Pollard and Alzarri Joseph run for a double. A six over deep square leg boundary. Mohammad Nabi drops and it goes for a six. Pollard finishes with a four, thanks to a misfield by Sandeep Sharma at long on. 19 runs from the over. Bhuvi's figures: 4-0-31-1. Pollard remained unbeaten on 46 off 26, with two fours and four sixes. MI-136/7. 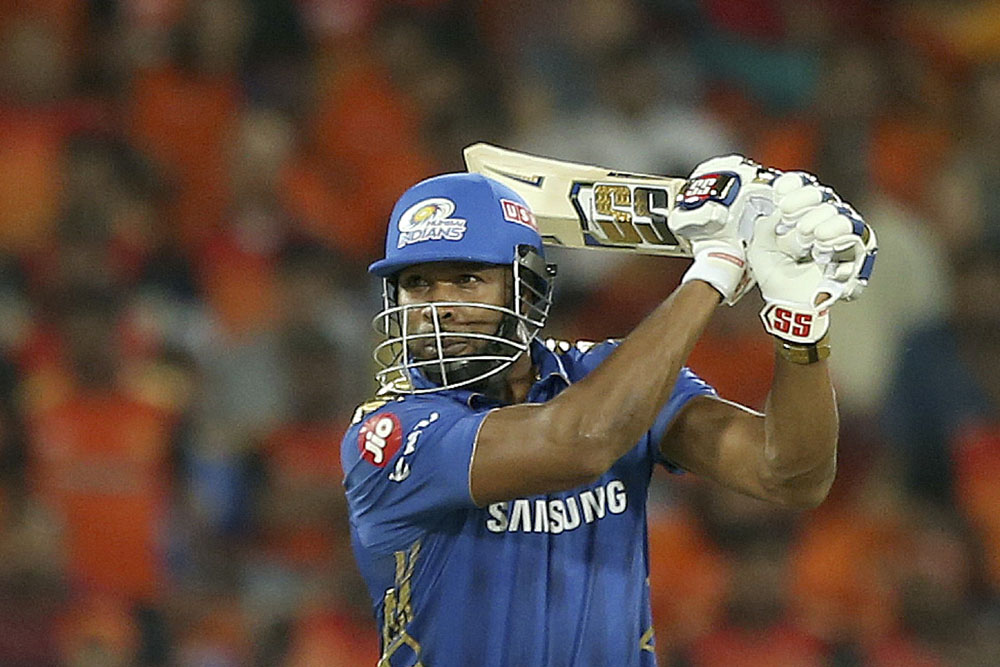 9:38 PM IST: Late fireworks from Kieron Pollard. A six to start the penultimate over, then another off the third ball. A front-foot no ball and a free hit. Low full toss, and Pollard smoked it over long-on. 19 runs from four balls. Another full toss, but Pollard misses it. Another full toss, for a single. 20 runs from it. MI-117/7 with one over to go.  Siddarth Kaul's figures: 4-0-34-2.

9:33 PM IST: New man Rahul Chahar lasts only seven balls. Caught behind and his interesting innings comes to an end. 10 off seven, with two fours. Eight runs and a wicket from Bhuvneshwar Kumar's third over. Earlier in the over, Rashid Khan dropped Kieron Pollard at sweeper cover. That happened off the second ball. MI-97/7 after 18 overs. 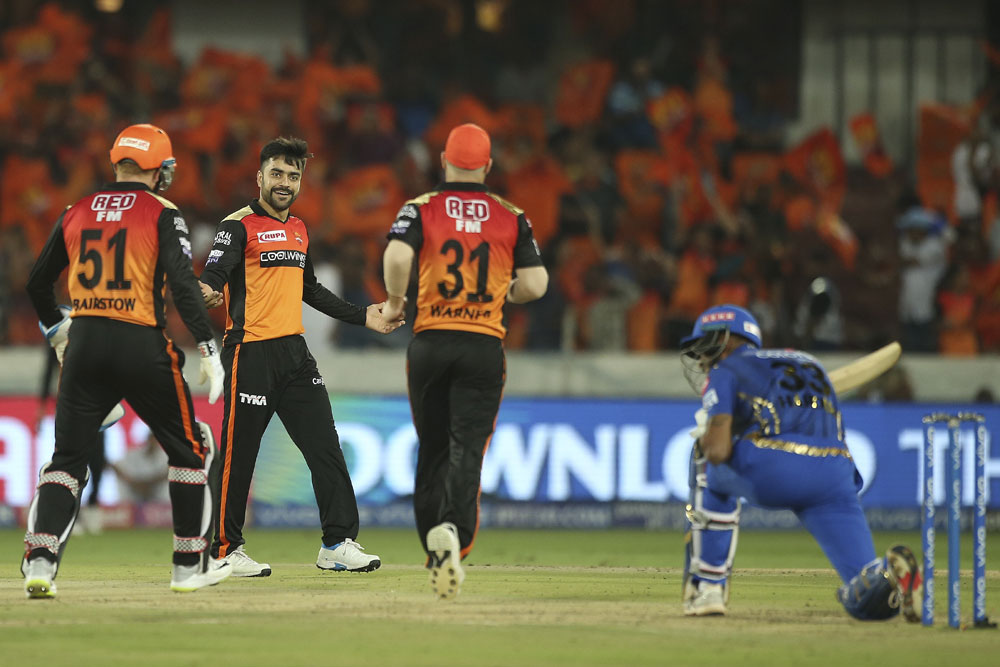 9:24 PM IST: Mumbai Indians are running out of options here. 16 runs in the last four overs, that's four an over. Both Kieron Pollard and Hardik Pandya are effectively tied down by SRH bowlers. MI-80/5 after 16 overs.

9:19 PM IST: Rashid Khan is toying with Hardik Pandya. Kieron Pollard also fails to counter the crafty Afghan spinner. Just three runs from the 15th over. MI-75/5. Both the batsmen are on identical scores of six from eight balls each.

9:07 PM IST: Brilliant work from Jonny Bairstow. Great presence of mind to initiate second run out attempt by uprooting the stump after he initially disturbed it. Ishan Kishan run out. FoW-65/5 (12.5 Over). Great over from Rashid Khan. Three runs and a wicket. Kieron Pollard is joined by Hardik Pandya. 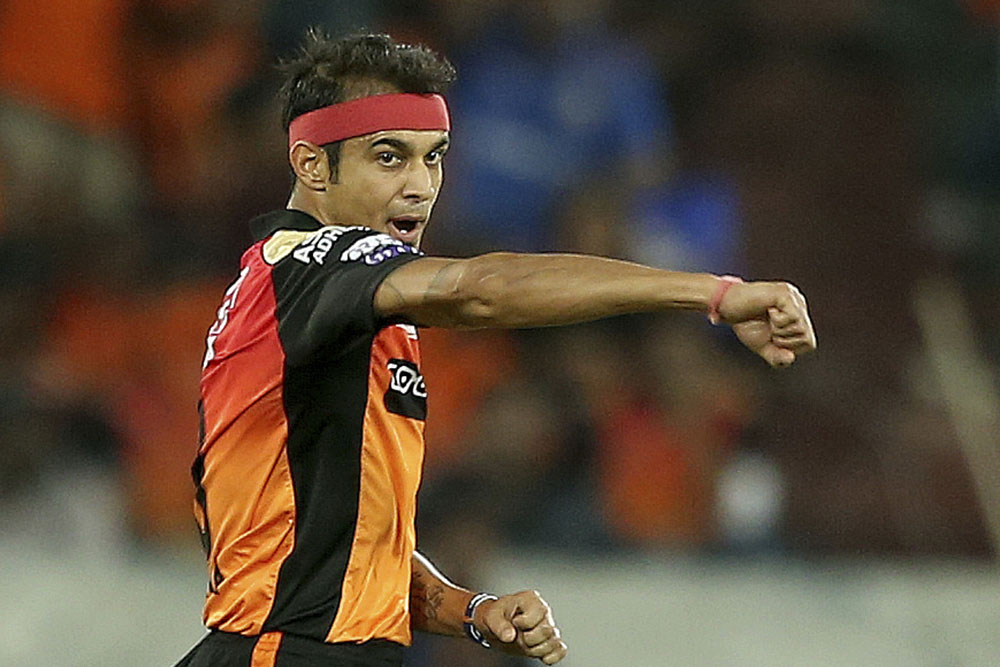 8:58 PM IST: Siddarth Kaul on with his second over and gets his second scalp. The medium pacer had Krunal Pandya caught behind. Pull shot gone horribly wrong. FoW-63/4 (11.4 Over). 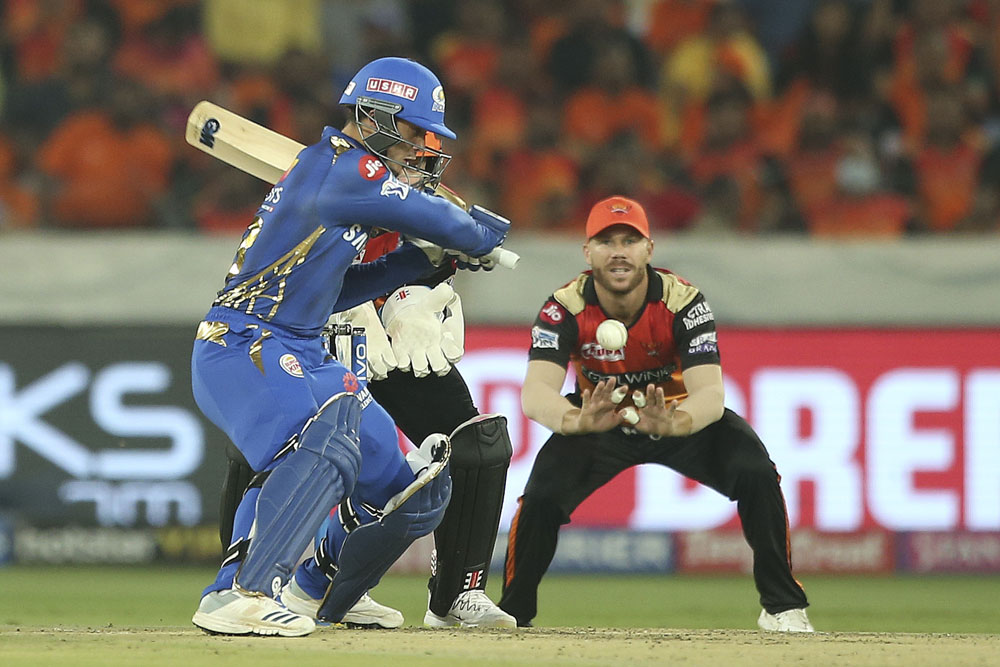 8:38 PM IST: Yusuf Pathan gets his first over. Eight runs from it. Four singles and a boundary, hit by Quinton de Kock off the second over, to deep fine leg. MI-38/2 after seven overs.

8:30 PM IST: Sandeep Sharma gets his first scalp of the night, traps Suryakumar Yadav in front. MI reviewed but it's umpire's call. FoW-28/2 (4.6 Over). Ishan Kishan is the new man for Mumbai. 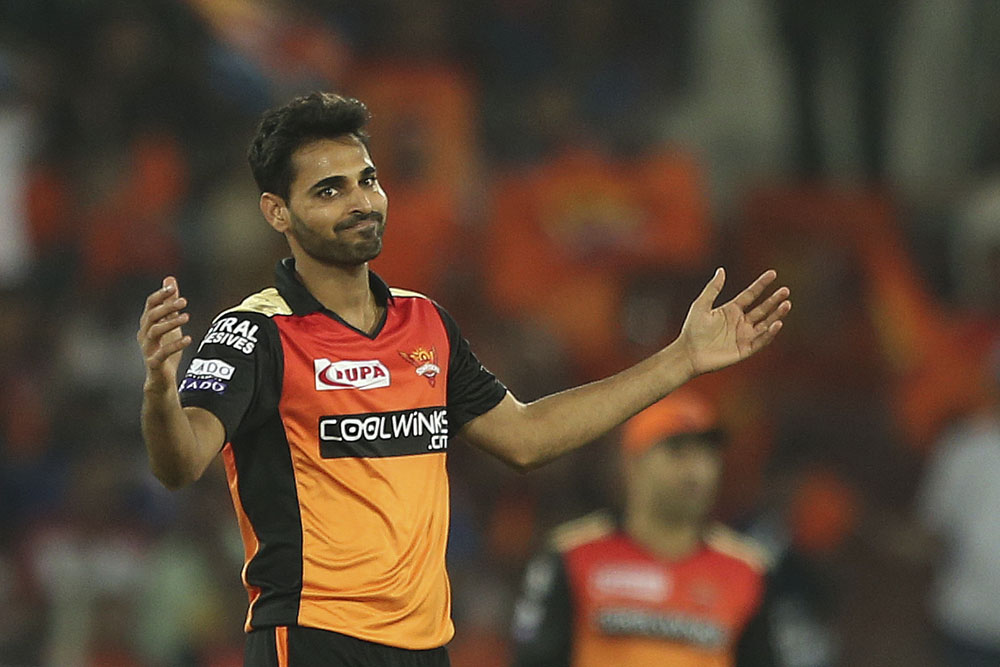 8:16 PM IST: Nine runs from Bhuvi's second over, including a six off the fourth ball hit by Quinton de Kock. MI-19/0 after three overs.

8:11 PM IST: Rohit Sharma is not to be deterred by those chances. He hits Sandeep Sharma for a six over deep square leg, off the second ball. Nine runs from the over. MI-10/0 after two overs. 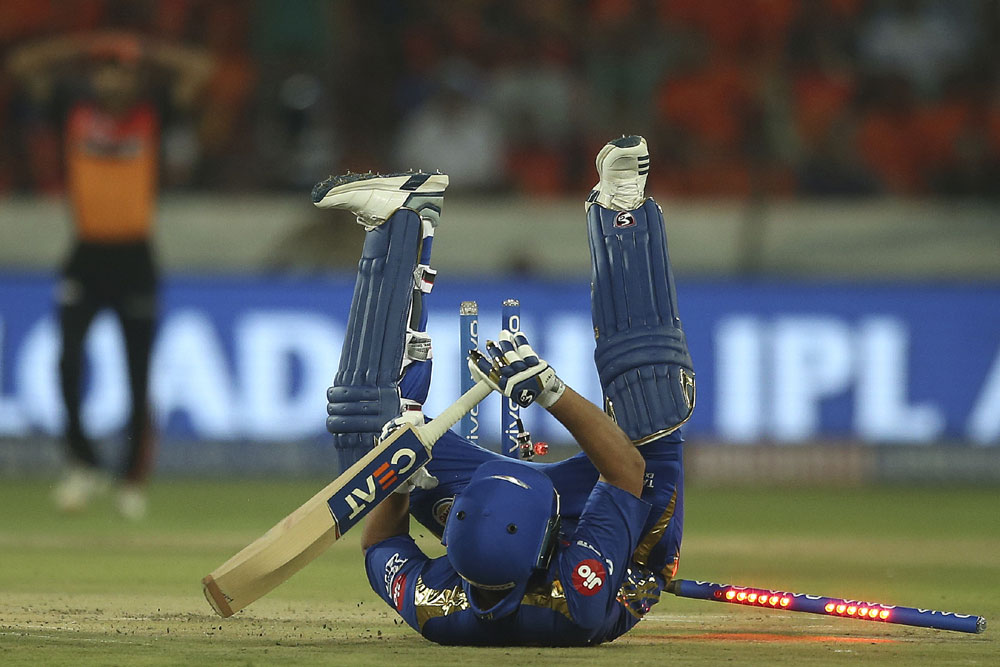 Mumbai Indians captain Rohit Sharma falls on the ground in an attempt to make it to the crease against Sunrisers Hyderabad. (AP Photo/ Mahesh Kumar A.)

8:06 PM IST: What an opening over. Rohit Sharma survives an LBW call off the fifth ball and Siddarth Kaul drops the Mumbai captain the very next ball. One run from Bhuvneshwar Kumar's first over.

7:33 PM IST: SunRisers Hyderabad have won the toss and have opted to field.

7:00 PM IST: SRH opener David Warner is the leading scorer this season with 264. For MI, Quinton de Kock leads the chart with 114 runs. It will also be interesting two see how Mohammad Nabi and Jasprit Bumrah perform today.

6:47 PM IST: Bhuvneshwar Kumar needs two wickets to become the first SHR player to take 100 IPL wickets, while Jasprit Bumrah is two away from becoming third highest wicket-taker for MI. He has 70 scalps. 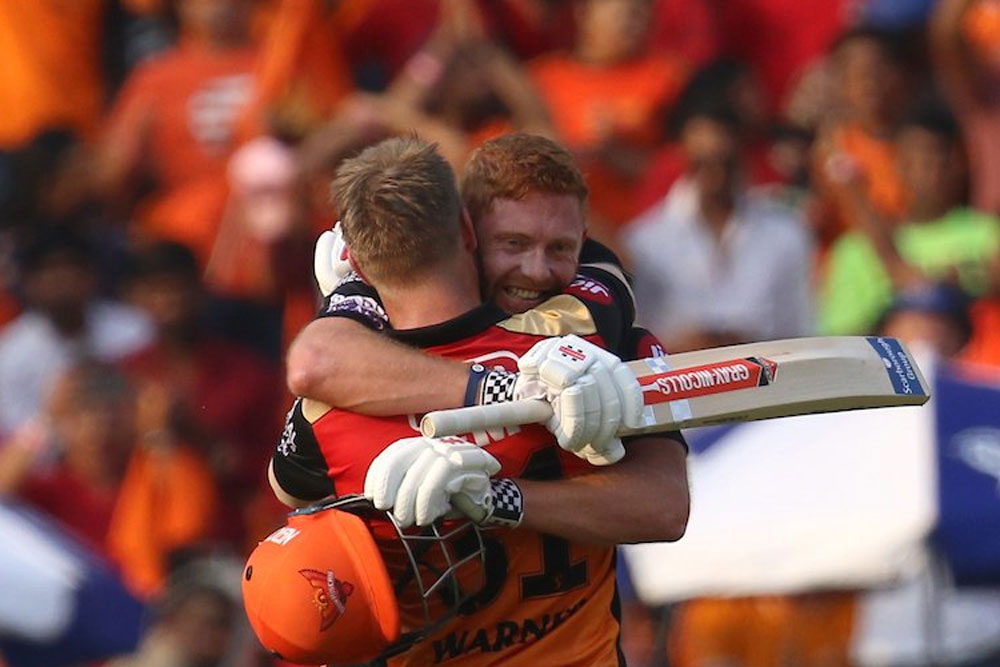 Warner and Bairstow are the best opening pair in IPL 2019 so far. AP photo.

After losing their match to Kolkata Knight Riders (KKR), SRH have won three on the bounce, defeating Rajasthan Royals, Royal Challengers Bangalore and Delhi Capitals (DC). And the star performers for the 2016 champions are the openers David Warner and Jonny Bairstow and Afghan allrounder Mohammad Nabi.

For Mumbai, currently sixth in the table started with a defeat. But after four matches, they have two wins. The start-studded hope for a good show from the likes of Hardik Pandya, Kieron Pollard, Jasprit Bumrah and of course skipper Rohit Sharma.