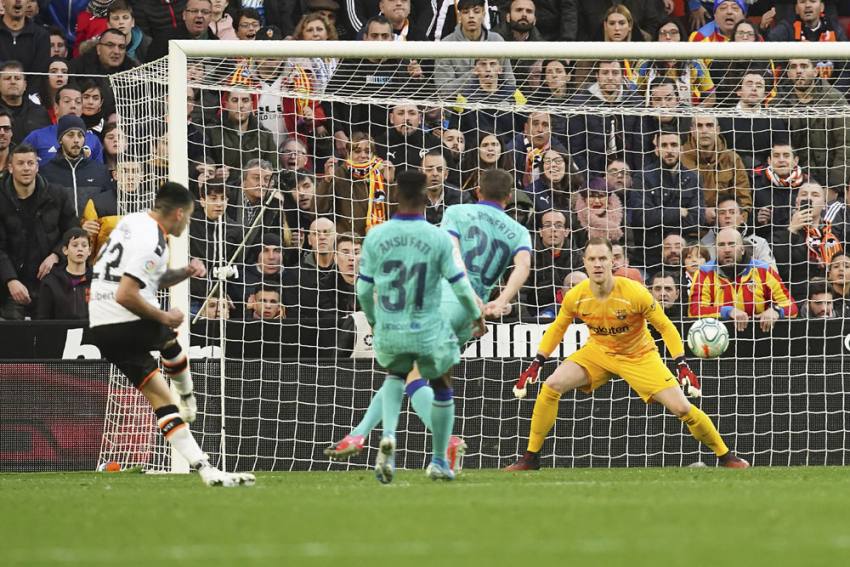 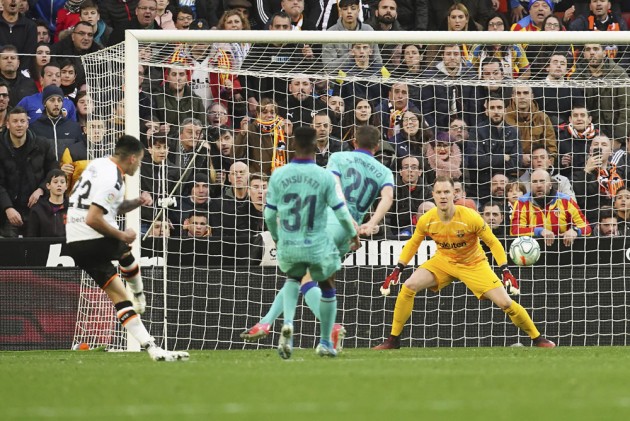 Valencia came into Saturday's clash having beaten Barca in just one of their past 10 meetings in all competitions, winning last season's Copa del Rey final, while their most recent league success at the Mestalla came in February 2007.

But the Blaugrana were on the back foot from the outset this time around and, while Marc-Andre ter Stegen saved a first-half spot-kick, Gomez made amends as his strike shortly after the restart went in off Jordi Alba.

Setien's side belatedly rallied, but after scraping past Granada and Ibiza in the coach's first two games in charge, their luck ran out, Gomez on target again with 13 minutes remaining.

Real Madrid, not in action against Real Valladolid until Sunday, now have the opportunity to pull three points clear of their bitter rivals at the top of the table.

4 - Jordi Alba has scored four own goals in #LaLiga in the 21st Century, more than any other Barcelona's player in the competition. Unlucky#valenciabarca #Barcelona#LaLiga pic.twitter.com/ebZH8v90uT

Gerard Pique gifted Valencia a huge opportunity to take the lead after 12 minutes, his poor clearance prompting an attack that ended with the Barcelona defender clumsily chopping down Jose Gaya inside the area.

However, Ter Stegen came to his team-mate's rescue, brilliantly springing to his left to save Gomez's penalty.

Ter Stegen remained by far the busier of the two goalkeepers and awkwardly helped Gomez's fierce drive onto the crossbar before parrying Kevin Gameiro's follow-up wide.

Barca did not truly threaten until the opening seconds of the second half when Ansu Fati ran onto Lionel Messi's pass on the edge of the area but shot just wide.

It was Valencia who soon led as the off-colour away side struggled to clear, allowing Gomez to shoot hard and low from the right-hand side of the area, his effort deflecting off Alba to wrong-foot Ter Stegen and loop into the roof of the net.

Messi drilled past the right-hand post and sent a lob narrowly over the top, before Jaume Domenech was equal to a 20-yard free-kick as Barca's spell of dominance came too late to rescue a result.

Instead, Gomez got his second goal, providing a clinical finish beyond the rooted Ter Stegen at the end of a Valencia counter-attack.

What does it mean? Concerns for Quique

Despite the narrow nature of the scoreline, there was an enormous amount of goodwill for Setien when his reign began with a win over Granada. But less than a week later, things are a little less rosy. Barca scarcely deserved the late victory in Ibiza and were completely outplayed here, provoking some early questions for the new coach.

Valencia forward Gomez has now scored or assisted in five of his past six LaLiga appearances against Barcelona. He was at the centre of his side's best work throughout. After missing a penalty, the Uruguay international was unfortunate to strike the crossbar when Ter Stegen's handling was uncertain but then netted a double.

Barca stalwart Pique did not start well, giving away a penalty, and hardly improved from there. Ter Stegen had to be alert to gather on the line, preventing a potential own goal, and then Pique failed to clear effectively in the build-up to the first goal.

- Lionel Messi had the joint-most shots without scoring in a LaLiga game for Barcelona (11).

- Barca have conceded 25 goals in LaLiga this season. They have not conceded as many goals at this stage since 2003-04 (26 goals) when they were second at the end of the season.

- Barca's Gerard Pique has conceded two penalties against Valencia in his LaLiga career, more than versus any team. However, none of those penalties have been converted.

Valencia go to Cultural Leonesa in the Copa del Rey on Wednesday, hoping not to follow Atletico Madrid in crashing out at the hands of the minnows. Barcelona host Leganes in the same competition the following day.