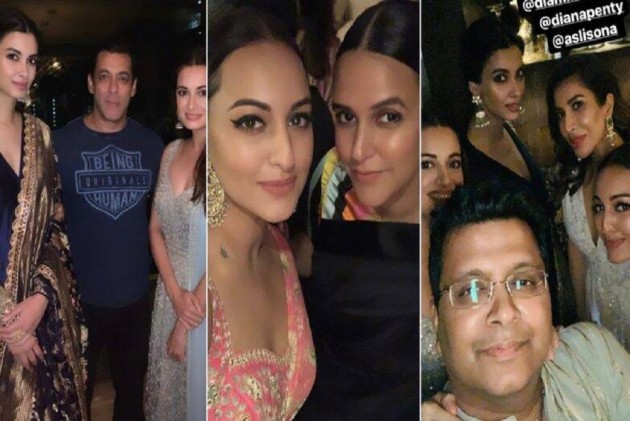 The festival of lights, Diwali is right around the corner and the Diwali parties of Bollywood celebrities have already begun. During Diwali, each and everyone in Bollywood dresses up in their best Indian attire looking stunning. Last night, celebs graced the Diwali party hosted by the producer Ramesh Taurani and who's who of Bollywood were present at the do. Salman Khan, Sonakshi Sinha, Dia Mirza, Sriram Raghavan, Vicky Kaushal, Nushrat Bharucha, Sunny Singh, Tusshar Kapoor, Jackky Bhagnani, Aftab Shivdasani, Preity Zinta, Rakul Preet, Shriya Saran, Kunal Kemmu and Soha Ali Khan, Tamannaah Bhatia, Angad Bedi and Neha Dhupia, Milap Zaveri and more attended the bash.

Everyone looked gorgeous and were having fun at the party. On the work front, Sonakshi will be seen in Prabhudheva directorial Dabangg 3 starring Salman Khan and Saiee Manjrekar. The movie's trailer was launched yesterday. Dabangg 3 is all set to hit screens on 20th December 2019.