Meet The Other Virat, The President's Dark Horse That Retired On R-Day

Virat, the black horse of the President's Bodyguard (PBG) who served several Presidents of India since 2003, retired from service on the 73rd Republic Day.

While Virat Kohli's retirement from Indian test cricket captaincy may be big national news, another dark horse named Virat has been making waves with his retirement after nearly two decades of service. Virat, the black stallion of the President of India's Bodyguard Commandant retired from service on January 26 this year. Virat is a Hanoverian horse, a German breed known to produce horses fit for competitive sports, and has been part of the President's Bodyguard (PBG) for 19 years since 2003.

A favourite at Republic Day parades, the stallion has attended the event 13 times during his service. The horse, who was the Mount of Colonel Anup Tiwary, had been awarded the Chief of the Army Staff Commendation earlier this year on January 15, annually observed as Army Day. Virat is the first horse to receive the commendation for exceptional service and abilities, a category that is usually dominated by dogs. In fact, two other dogs, Heena and Darmi were also awarded the honour for their exceptional service. 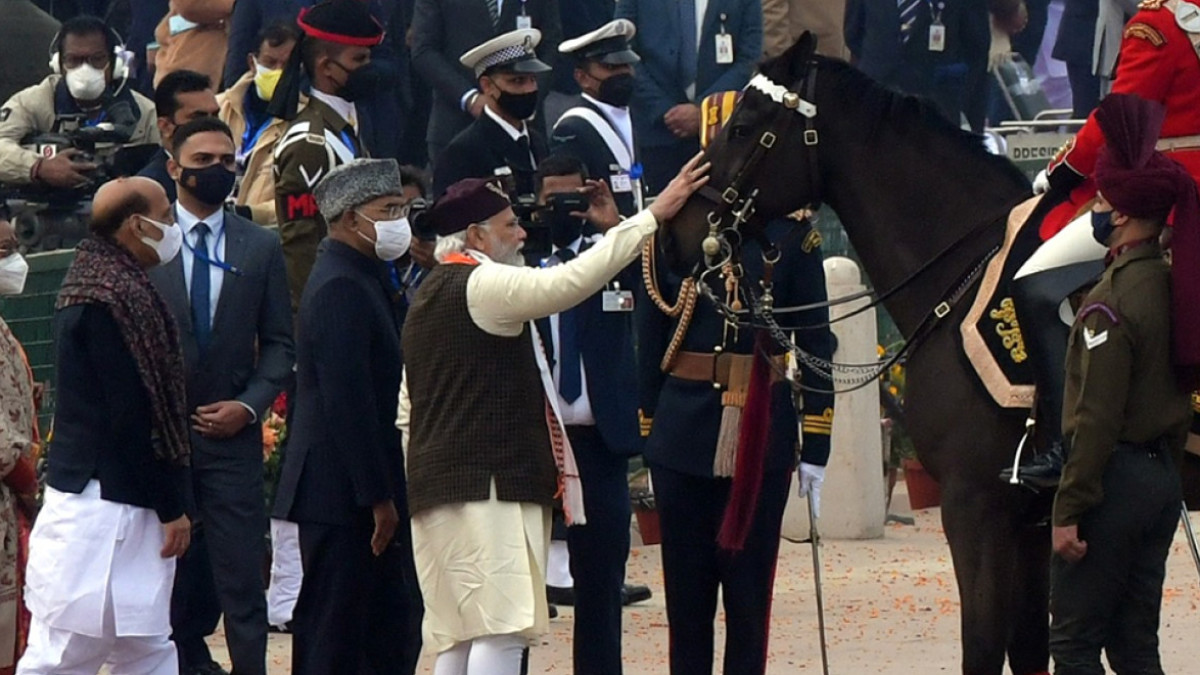 Magnificent Flypast At Republic Day Parade, Celebrations Scaled Down Due To Covid Scare

Virat has been the trusty steed of several Presidents before Kovind and is known for his patience and agility despite his age. He is called as a "charger" by officials who handle him. On Wednesday, when India celebrated the 73rd Republic Day, the horse was bid farewell by a host of illustrious patrons including President Ram Nath Kovind, Prime Minister Narendra Modi and Defence Minister Rajnath Singh. The stallion earned a pat on his back from the PM himself. A video of the interaction has been going viral on social media.

Virat's COAS commendation award was accepted by Tiwari on the horse's behalf at the end of the parade. Crowds cheered from their stands as the horse walked up to received the honour.

Virat might be the first horse to win the Army Staff Commendation but horses have been given awards and special honours in India before as well. Rio, the 22-year-old horse of the Indian Army's 61 Cavalry regiment - the world's only active horse regiment, received a special recommendation last year after making his 18th appearance at the 72nd Republic Day parade in 2021. The animal also received a pat on his back from the Indian Army Chief General MM Naravane for providing exemplary services.

While horses have the privilege of being given names in the army, mules used by the forces often do not get any recognition or name (they are simply known by their hoof numbers). However, Pendogi, a war mule that joined the Indian armed force's Animal Transport Unit as a  'Mountain Mule' (MA) in 1962, was not only given a name but also heaped with awards including the ceremonial velvet rug presented by the army for exceptional valour. Pendongi has also been honoured recently after a new lounge at Delhi's Central Army Service Corps mess.

Significance of horses in R-Day parades

Virat was a part of a contingent of 200 horses that escorted the President to Rajpath during the Republic Day parade in New Delhi and then back to Rashtrapati Bhawan. The horses are flagged with other troops, security vehicles and bodyguards. There are special requirements for horses to become part of the team of Presidential escorts. Only horses who are over at least 15.5 hands height are selected for the special ceremonial contingent, Indian Express reported.

The horses usually arrive with the Presidential vehicle - traditionally a string of armoured Limousines carrying the President and other security forces. However, in 2014, then President Pranab Mukherjee had raised debate after he made a return to the original horse-drawn buggy that had been discontinued from use 30 years ago to arrive at the Parade.

The horses that are part of the Presidential escort are bred by Remount Veterinary Corps. The 44 Military Veterinary Hospital takes care of their health and physical fitness.