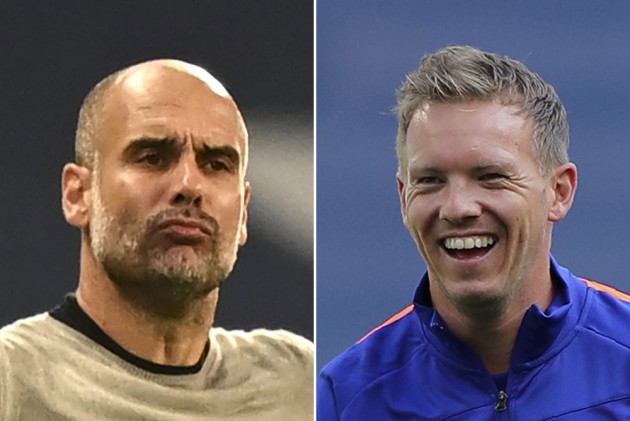 RB Leipzig coach Julian Nagelsmann does not believe Pep Guardiola made a mistake by making tactical tweaks to his Manchester City side in their surprise defeat to Lyon. (More Football News)

City exited the Champions League on Saturday, with Lyon progressing to the last four – where they will meet an imperious-looking Bayern Munich – with a 3-1 win.

Raheem Sterling missed a glorious opportunity when City were 2-1 down, with Moussa Dembele subsequently making sure of Lyon's progression with his second goal.

Seemingly in an attempt to match Lyon's system, Guardiola switched to a 3-4-3 shape for Saturday's clash.

But his tinkering backfired, with Guardiola coming in for some criticism for altering the system, while Lyon coach Rudi Garcia claimed his side "won the tactical battle."

Nagelsmann, however, insists it was individual moments, rather than the tactics, which ultimately cost City.

"The idea he basically had was not too complicated," Nagelsmann, who often alternates between using a back three and back four, told a news conference ahead of Leipzig's semi-final against Paris Saint-Germain.

"In the end, it's individual situations. In my opinion, it is a bit too easy to always blame the formation for something like that.

3 - Since progressing from his first seven Champions League quarter-finals as a manager with Barcelona and FC Bayern München, Pep Guardiola has been eliminated in each of his three appearances at this stage of the competition with Man City (17-18, 18-19 & 19-20). Crushing. #UCL pic.twitter.com/szeEW7qLWG

"If City had won, everyone would have said 'world-class tactics!' Now he has surprised everyone.' It's a tightrope.

"In a knockout game you often have to make tactical adjustments that you might not make in the league. If necessary, you can take a point with you. That doesn't work in the Champions League. Every coach has to be there to find your own way."

Leipzig booked their place in the semi-finals with a 2-1 win over Atletico Madrid, while PSG overcame Atalanta in dramatic fashion.

Nagelsmann is expecting a stern challenge, especially with Neymar and Kylian Mbappe both likely to start for PSG, yet believes his side are playing with more verve and resilience than they showed in the closing stages of the Bundesliga season.

"I think that in the Bundesliga the players were tired and struggling to catch up," he said. "They were strange times.

"They are hungry for victory and against Atletico Madrid it was possible to see that. We are happy, but we still want to take more steps and the players are prepared.

"[PSG's] quality is very high, so it will be a collective effort. We will try to impose our game and be brave. We want to try to put them under pressure, we have this potential, with many young players, and we are going to show it."