Manchester City are out of the Champions League at the quarter-final stage again, and it's difficult to look past Pep Guardiola and Ederson 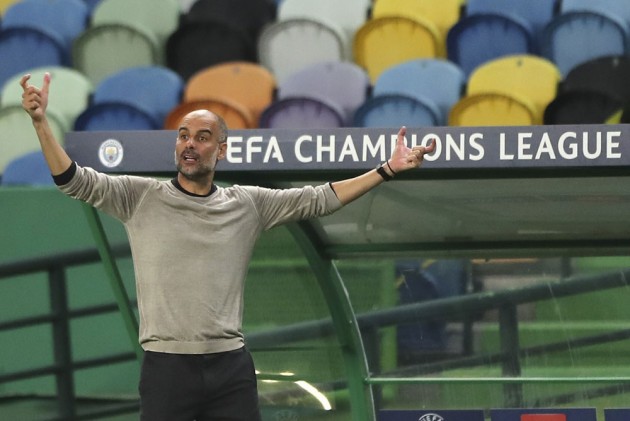 For the third successive season, Manchester City's quest for a maiden Champions League crown ends at the quarter-final stage, and once again questions will be asked of Pep Guardiola. (More Football News)

The Catalan coach, a visionary and the man regarded as the finest tactician in football, was brought in to take City to the next level – winning the Champions League – but familiar criticism will be levelled at him following Saturday's shock 3-1 defeat to Lyon.

That's the same Lyon who finished seventh in Ligue 1 and had played just two competitive matches since March.

Guardiola has made a habit of tinkering with his set-up for the biggest matches in recent years, so much so that his meddling – however curious – was almost to be expected here.

Were his decisions crucial? That's debatable. Were they influential? Absolutely.

Eric Garcia was given the responsibility of starting at centre-back, though once the match began the rest of Guardiola's line-up – and the fact Fernandinho dropped in as a third central defender – became clearer.

But what didn't make much sense was City's high line and why they had deferred from their strongest set-up and starting XI – Riyad Mahrez, David Silva and Bernardo Silva were all among those on the bench.

As for their defence, a layman could have pointed out that Lyon's forward pairing of Karl Toko Ekambi and Memphis Depay, as well as left wing-back Maxwel Cornet, have plenty of pace. Surely a high line would play right into their hands?

Such a backline set-up was on display, and punished on several occasions, in Bayern Munich's 8-2 win over Barcelona 24 hours earlier and it wasn't especially surprising to see Lyon exploit this when taking the lead.

After all, Lyon had already threatened with passes over City's defence when Toko Ekambi raced clear in the 24th minute. And although Garcia's last-ditch tackle was exceptional, Cornet was on hand to squeeze a delightful curled effort inside the left post with Ederson out of his goal.

City did enjoy a promising flurry late in the first half, but beyond Kevin De Bruyne and Raheem Sterling, there was very little craft on display from them.

Guardiola's side were then met with a wonderful intensity after the break, as if Rudi Garcia had told his youthful Lyon this was the opportunity of a lifetime.

It did not initially lead to much from an attacking sense, rather an increased solidity at the back – City had 71 per cent of the possession between half-time and the 60th minute but failed to create a single clear chance.

Houssem Aouar and Maxence Caqueret, the fledgling pairing in midfield, were exceptional with their effective harrying off the ball and ability to ease pressure once in possession.

Though for a time, once City had levelled through De Bruyne – teed up by Sterling – it looked as though there would be only one winner. The Premier League giants would surely have too much from there.

But Lyon suddenly sprung into life, as if they had just been hibernating, conserving energy in case a late burst was required.

Granted, there was certainly a hint of fortune about Lyon's second goal. Moussa Dembele got it, but he was helped by poor goalkeeping from Ederson and VAR, with the officials deciding he hadn't fouled Aymeric Laporte in the build-up and the offside Toko Ekambi was not interfering with play.

But from City's perspective, it saw their high line exposed yet again.

Sterling's seemingly impossible miss soon after summed up their day, and Lyon took advantage – Dembele tucking in his second a minute later after another Ederson howler.

Defeat robs Guardiola of a semi-final against his former club Bayern Munich, the dream last-four clash of many a neutral – though, on the evidence of this, Die Roten might have been in for another landslide victory such were City's defensive issues.

For all of Guardiola's qualities, several times before he has been accused of overcomplicating life for himself in games of this magnitude. He might have changed his set-up back in time against Real Madrid, but here it set the tone for the rest of the night.

His tinkering seemed unnecessary. City have more than enough ability to beat the seventh-best team in France on their own terms.

It's difficult to argue that this isn't another high-profile defeat that Guardiola has brought on himself.